The Xfinity East Plaza offers an active social gathering space and an energy offset, both of which cool the bottom line.

The AmericanAirlines Arena sits on a podium in downtown Miami, overlooking the cruise ships docked in Biscayne Bay below the causeway that leads to South Beach. The views have always been there. But for 16 years, few Miami Heat fans or concert-goers looked at them. But today, the neutral-toned brick pavers on the east side of the venue are covered in vivid Miami color under a protective roof.

When it wasn’t covered, this space was nearly impossible to program in the South Florida climate that can be too hot or too wet for outdoor entertainment. Now the Xfinity East Plaza is a 23,000-square-foot destination that serves as an extension of the arena concourse. Guests sip on craft cocktails at the full-service BACARDÍ Bar, dine at Pincho Factory – a hometown favorite eatery, and enjoy the live entertainment performed on the 720-square-foot stage, complete with a state-of-the-art audio system and five NanoLumens – 360-degree cylinders of brilliant LED imagery.

“We wanted to make a big splash in this market.” – Thomas Zemaitis, Comcast Florida/Xfinity

The space is programmed nightly with pregame, in-game, and post-game acts, including some notable bookings, such as DJ Khaled who performed on the Xfinity East Plaza stage on its opening night in January.

“From an entertainment standpoint, this is what we do,” says Michael McCullough, Executive Vice President and Chief Marketing Officer for the Miami Heat. “We were the first team to have a DJ in the arena way back in 1999. So now we’re bringing that entertainment out here [on the plaza] with post-game parties.”

Retail points of sale on the plaza include four carts, selling jerseys and New Era caps for all ages. 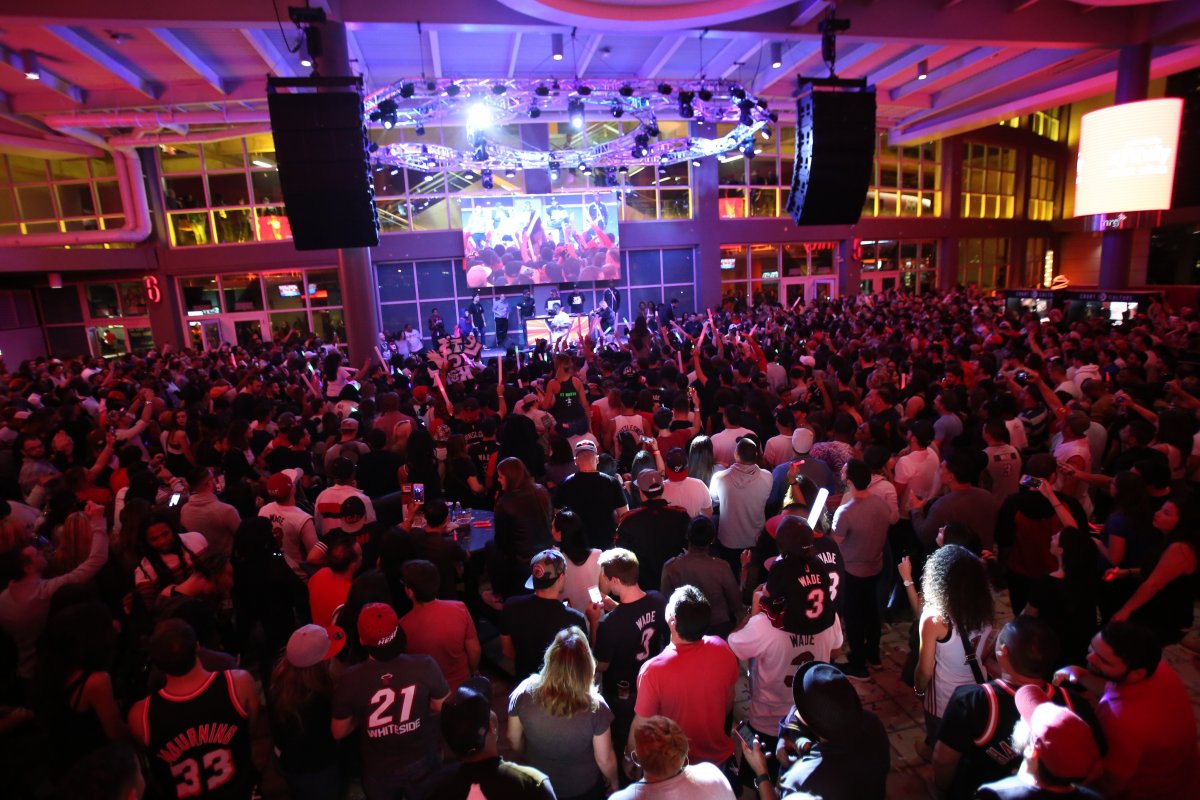 A 720-square-foot stage on the Xfinity East Plaza is programmed nightly with entertainment. On the plaza’s opening night, DJ Khaled provided a postgame performance.

Adorning the north end is an activation area for the plaza’s title sponsor. The clear highlight of the Xfinity Zone is its X1 wall, a 16’ x 9’ LED video board with multiple television screens that allows Xfinity to display its content and present live product demonstrations from a team of up to 12 people for every event.

“The X1 wall gives us an opportunity to present content in a very unique fashion,” says Thomas Zemaitis, Vice President of Marketing for Comcast Florida. “We can show the X1 platform which is a completely different entertainment experience.”

Xfinity, the telecommunications and cable division of Comcast, immediately saw the team’s vision for the plaza and how it could incorporate its brand into the area.

“We wanted to make a big splash in this market,” Zemaitis says. “And we are able to connect with the right consumer segments and get them to experience our products.”

“It’s not just a standalone place to go charge your phone,” adds John Vidalin, Executive Vice President and Chief Revenue Officer for the Heat. “It’s really about being engaged with the fans.”

Speaking of charging your phone, embedded in the lounge furniture in the Xfinity Zone are charging stations powered by the sun, a feature driven by the Heat’s commitment to sustainability and by NRG, the Official Alternative Energy Partner of the Miami Heat and AmericanAirlines Arena, who is largely responsible for giving life to this project.

“At its core, this is a sustainable project. It’s a demonstration for this type of translucent solar panel system.” – MacAdam Glinn, Skanska

Located above the Xfinity East Plaza is 5,000 square feet of solar panels embedded into an array of 14 glass solar rings imported from Onyx Solar in Spain. The energy produced by the solar panel system is behind the grid, going directly into the building, serving as an offset of energy consumption.

“At its core, this is a sustainable project,” says MacAdam Glinn, Senior Vice President at Skanska, who served as general contractor for the plaza construction. “It’s a demonstration for this type of translucent solar panel system.”

According to Glinn, Skanska is the only major U.S. construction company that is certified in the ISO 14001 environmental management standard.

“We implement [ISO 14001] on all of our projects, regardless of whether or not a client pays for it,” Glinn says. “We believe being a sustainable construction company that is environmentally thoughtful is good business. And it is part of our commitment to the communities that we serve.”

In 2015, the AmericanAirlines Arena became the first sports and entertainment facility in the world to be recertified LEED Gold by the U.S. Green Building Council, an attractive value proposition for NRG.

“[NRG] could help us tell that story and create something that is authentic to that story,” Vidalin says.

“It was about creating a tangible solution that fans can see and experience,” adds Christine Brown, Senior Director of Sponsorships and Events at NRG. “Anytime that we can create something that has such visibility for fans, it helps us tell that story better for them in a way that’s relatable.

Along with its partnerships with multiple NFL properties, NRG is using AmericanAirlines Arena as a national proof point for its solutions.

“It’s not really just about the Florida market for us,” Browns explains. “It’s about the story that we can showcase for our customers nationwide.”

In addition to its U.S. customer base, Miami is the perfect marketing platform for NRG’s ambitions to further penetrate Latin American markets, a significant driver for the sponsor company, which is not a utility retailer in Florida. 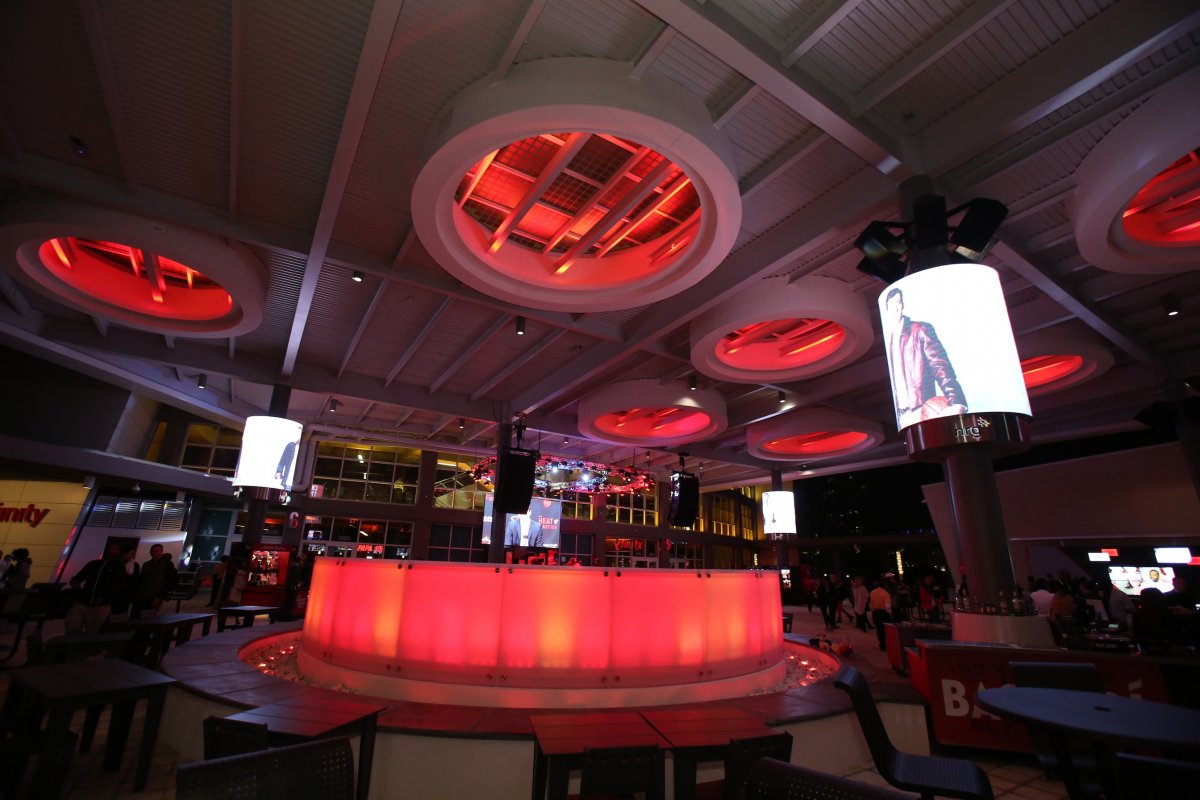 “Miami is the gateway to the Caribbean,” summarizes Vidalin. “It was a chance [for NRG] to plant a flag in South Florida at an international building and an iconic structure. A lot of people come in and out of this building from the Caribbean and from South America.”

In addition to its energy offset, the Xfinity East Plaza also demonstrates the Heat organization’s commitment to sustainability with a FF&E package that includes tables and chairs made from 100% recycled plastic, the equivalent of 24,104 milk jugs.

Perhaps the most valuable amenity for the modern fan that was added to the Xfinity East Plaza is Wi-Fi. The plaza is the only place in the arena with free public Wi-Fi. Non-Xfinity customers can obtain access by providing an email address and zip code, serving as valuable data collection for Xfinity, which has 13 million Wi-Fi hot spots nationwide, two million in Florida alone.

“We wanted to give fans something they could use and that would draw them into us,” says Zemaitis. “And we want them to use it every time they walk by a Xfinity Wi-Fi hot spot. So it’s a way to keep them engaged.”

An additional phase of construction is planned for this summer which will complete the plaza area. The old Bongo’s Nightclub, situated adjacent to the Xfinity East Plaza, will be repurposed into a two-level, 17,000-square-foot interactive event space and café, hosting events such as wedding receptions and corporate meetings. Construction is scheduled for completion ahead of the 2016-2017 NBA season.

The Xfinity East Plaza at AmericanAirlines Arena differs from other plazas across the venue marketplace in that it is not a public space, but rather an extension of the facility’s concourse between Gates 4 and 5. But the spirit of the space is the same. It’s a fan engagement, revenue-generating opportunity outside the venue walls, but also driven by environmental awareness in Miami.

And while this plaza isn’t connected to a live entertainment block, it is facing a waterfront view that is uniquely Miami, and one being enjoyed for the first time, rain or shine.

What new destinations are you creating in your venue?
Write to Jared at jared@alsd.com.