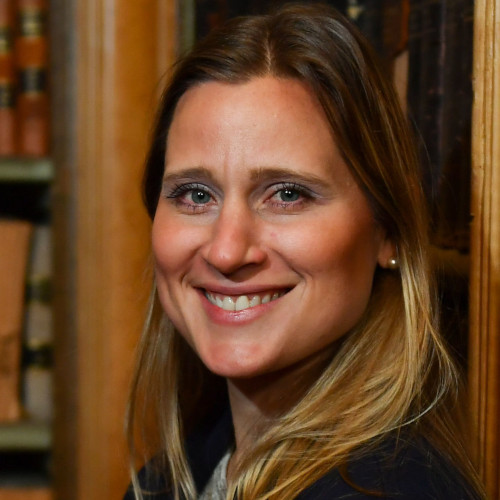 Angela Ruggiero is a global sports leader, advocate, entrepreneur, author, brand ambassador, investor, motivational speaker, and podcaster, whose work has been featured in dozens of global and national media outlets.

Ruggiero is a four-time Olympian and gold medalist in ice hockey for Team USA and was the first female non-goalie to play in a men’s professional hockey league. She has been named the Best Player in the World by The Hockey News and is a member of the 2019 US Olympic Hall of Fame, 2017 IIHF Hall of Fame, and 2015 USA Hockey and Hockey Hall of Fame (4th woman).

She was a distinguished USOPC and International Olympic Committee Member and Executive Board Member for almost a decade and served as the Chief Strategy Officer for the successful Los Angeles bid to host the 2028 Olympics.

As the CEO & visionary co-founder of Sports Innovation Lab, a technology-powered market research firm, Ruggiero’s company empowers industry-leading sports brands to create breakthrough fan experiences. Working with over 50 companies including the NFL, NHL, FIFA, Coca-Cola, DraftKings, and CLEAR, Angela spearheaded groundbreaking research which defined and coined the term Fluid Fan™ for the industry, and lead clients to develop innovative strategies for connecting with these evolved fans.

Angela has been named to Sports Business Journal's 40 Under 40 List and Forbes’ Top 25 Most Powerful Women in Sport. She currently serves on the International Olympic Committee's Digital and Technology Commission, the IOC’s Ethics Commission and the IOC’s Nominations Commission, the NFL Players’ Association “One Team Collective,” the Board of Harvard Athletics, Titletown Tech, B.A.A., and is a Member of World Rugby’s Executive Committee.

She is a graduate of the Harvard College (BA), Harvard Business School (MBA), and earned a Masters in Education from the University of Minnesota.