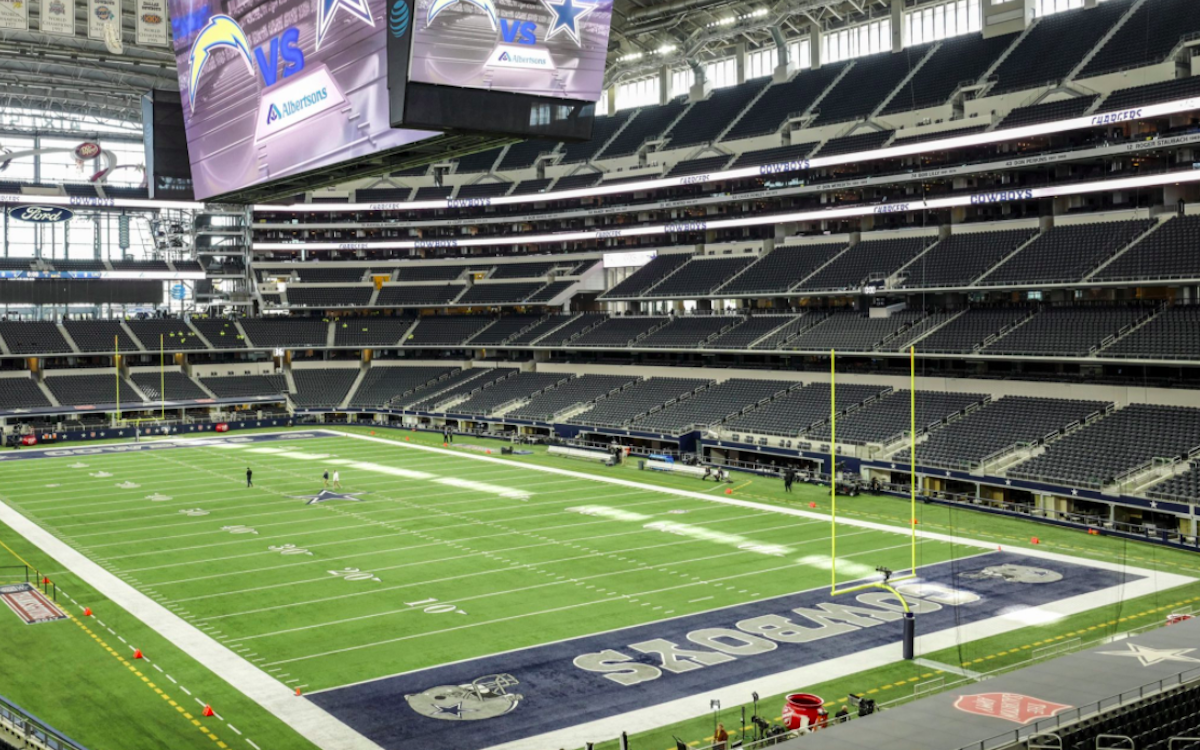 When the building now known as AT&T Stadium opened in 2009, it arguably changed the way the world thought about large entertainment venues. In many ways, it pushed the envelope on what was possible to make the fan experience better than imagined, from the largest-at-the-time video board to the stunning, flexible architecture, which positioned the venue as a host to events well beyond football.

When cellular giant AT&T added its name to the venue via sponsorship in 2013, the building was already well on its way to being one of the leaders in fan-facing wireless networks, with both a cellular distributed antenna system (DAS) and a Wi-Fi network that were both expanded on in following years.

But sometimes, like a star player whose talents are fading, networks reach the end of their useful life, and it’s time for a replacement. Such was the case with AT&T Stadium’s DAS network the past few years, as older equipment in an older design just couldn’t keep up with the growing demands of a mobile-device-centric fan base.

“Our DAS was really at the end of its life,” said Matt Messick, Chief Information Officer for the Dallas Cowboys. “I was receiving instant feedback about when it was not performing. And last year was especially rough. At every Cowboys game, we were hitting the limits.”

But like a good front office that is constantly seeking to improve its talent, Messick and the team’s networking partners had been busy forming a new plan – one more than two years in the making – that threw out all the old DAS playbooks and instead built something completely new.

The end result included an incredibly dense network design with 670 network zones, approximately a 10x increase from the previous DAS, an all-digital infrastructure that allows for more optical fiber, reducing the amount of telecom gear needed on premise, resulting in huge power and space savings, and cutting-edge MatSing Lens antennas to provide precise coverage to the seating bowl, with the ability to cover previous problem areas like lower-bowl seating and on-field configurations for concerts and other events. The DAS will also be able to support lower-band 5G communications when carriers deploy services in that spectrum.

Taking advantage of the break in event hosting brought on by the COVID-19 pandemic, the Cowboys and networking partners ExteNet Systems, CommScope, MatSing, and lead cellular provider AT&T were able to install the new network in just 16 weeks, having it ready to go before the Cowboys’ 2020 NFL season began.

And while the limited number of fans in attendance at home games in 2020 probably had more bandwidth than they could handle, Messick is looking forward to a future of full houses because he’s confident that the new DAS will be able to support all the demands the crowds request, for now and into the foreseeable future. 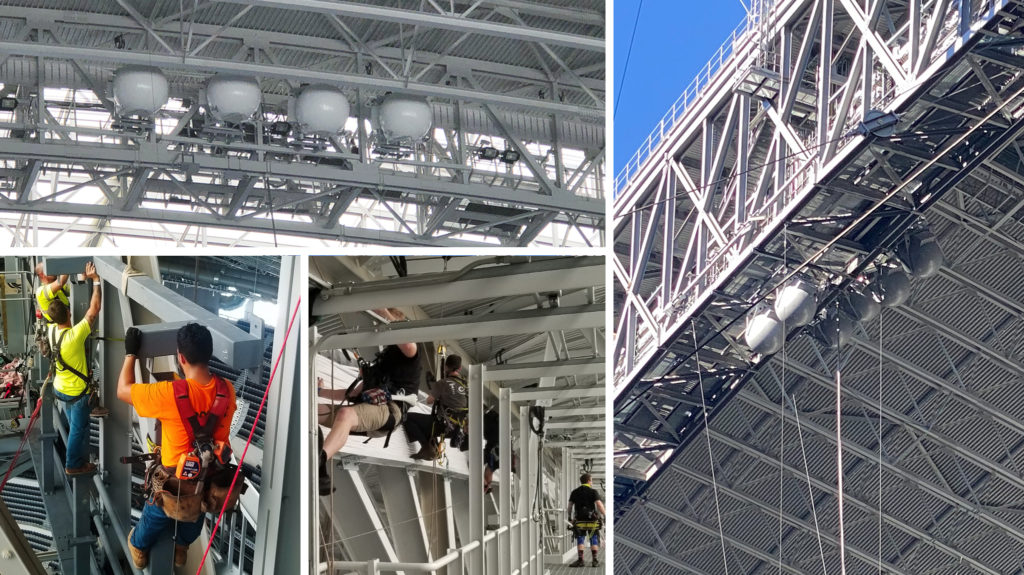 Taking a Large Leap into the Future

While any stadium’s operators and network crews may feel pressure if their wireless isn’t performing well, consider the extra impetus on making sure mobile devices work well inside a building that has the name of one of the nation’s top cellular providers across its façade.

“The AT&T name on our building is just one of the main driving factors behind this and why we needed to take a large leap into the future,” Messick noted.

“For AT&T, this is one place we wanted to be loud and proud,” Sinclair said.

But if there was agreement on the end goal – to build the biggest and best DAS ever – it was the devil of the details for how to get there that caused the most consternation. Jeff Alexander, Senior Vice President for ExteNet Systems, the network operator at AT&T Stadium, said the process started with the understanding that the new system would be much more detailed than just a simple upgrade.

With traditional top-down cellular DAS systems under strain in stadiums everywhere, the partners picking the new network for AT&T Stadium knew they couldn’t rely on prior designs to be their guide.

“This had to be nothing like the past,” Alexander said. “The past designs could only get us so far, and we knew we needed something more, something different.”

In search of a combination of technology and deployment strategy, the team of partners left no stone unturned in their search for the pieces needed to solve the puzzle.

“If I said we looked at every available option, that’s an understatement,” said Alexander, who ran off a long list of different vendor equipment and deployment methods considered, like under-seat, behind-the-seat, and small-cell architectures, among others.

With stringent requirements for architectural aesthetics and structural engineering concerns, as well as overall performance, Alexander said that all of the early ideas failed in one way or another.

“For some reason, we disqualified everything we came up with,” Alexander said.

But then, Alexander said a key question was asked: “We wondered if we used MatSing antennas, what would it do for us?”

Both AT&T and ExteNet had some recent experience with the unique, ball-shaped antennas from MatSing, which offer multiple radio antennas with the capability to allow for incredibly precise beams of coverage. AT&T, which installed a DAS based on 52 MatSing antennas at Amalie Arena in Tampa a couple years ago, saw good initial performance from that network at the NCAA Women’s Final Four in 2019.

ExteNet, which used some MatSing antennas in its DAS design at the Milwaukee Bucks’ new Fiserv Forum, said it was pleased with the performance of the MatSing devices there.

Since the MatSing antennas can broadcast a signal much farther than conventional antennas, the latest design twist with MatSings is to put them in the rafters of an arena, a placing that gives them clear line of sight to seats while also keeping them hidden from fans’ eyes. With its extensive overhead structure, AT&T Stadium had more than enough places to mount the MatSing antennas, which were six feet in diameter, to point down at the seating bowl.

With each antenna able to accept 48 remotes, MatSings give venues a different way to deliver dense coverage from a single installation spot, and one that is much simpler to tune since the line-of-sight coverage areas are calibrated with a laser beam instead of the extensive RF balancing required with traditional DAS systems.

The Las Vegas Raiders are just one of the recent converts to the school of MatSing, using 30 antennas to supplement the DAS at their new home Allegiant Stadium. 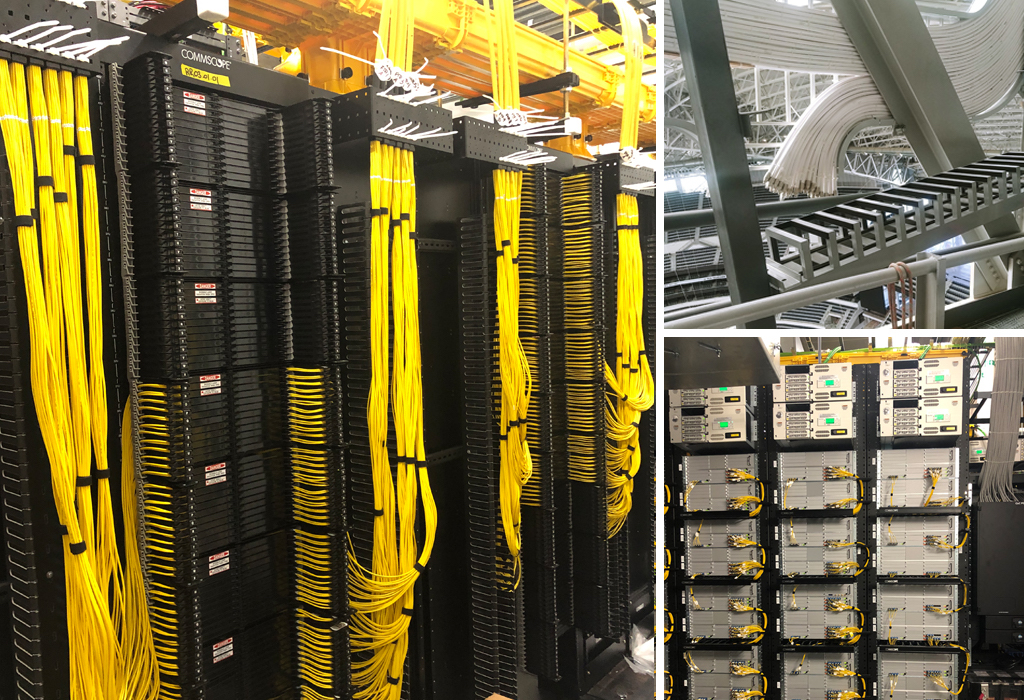 Getting into the Zone:
More DAS Density Than Ever Before

With the MatSing antennas’ ability to precisely split the seating area coverage, the team of network partners had the key element to support their idea that what was really needed was a radical increase in the “zones,” or separate areas of antenna coverage inside the stadium.

But with the MatSing antennas, ExteNet’s Alexander said the network team was able to support “extremely precise” zones without having to worry about the costs of drilling under-seat or having to do network testing for interference between nearby devices as would have to be done with an under-seat design.

“MatSing was just a huge game-changer for us,” the Cowboys’ Messick said.

From there, other design elements and strategic decisions emerged. One was to make every one of the stadium’s 380 suites its own DAS zone. Another was to exclude the use of lower-band spectrum, primarily those bands under 1000 MHz, because signals in that range are actually “too good” at covering a wide area – a great feature for outdoor macro networks but not so fantastic when trying to deploy low-band cellular inside a close space.

According to Alexander, the new DAS will only support licensed cellular spectrum from 1700 MHz and above.

“Lower bands are just not controllable,” said Alexander. Leaving them out, he said, “was a key to the design.” 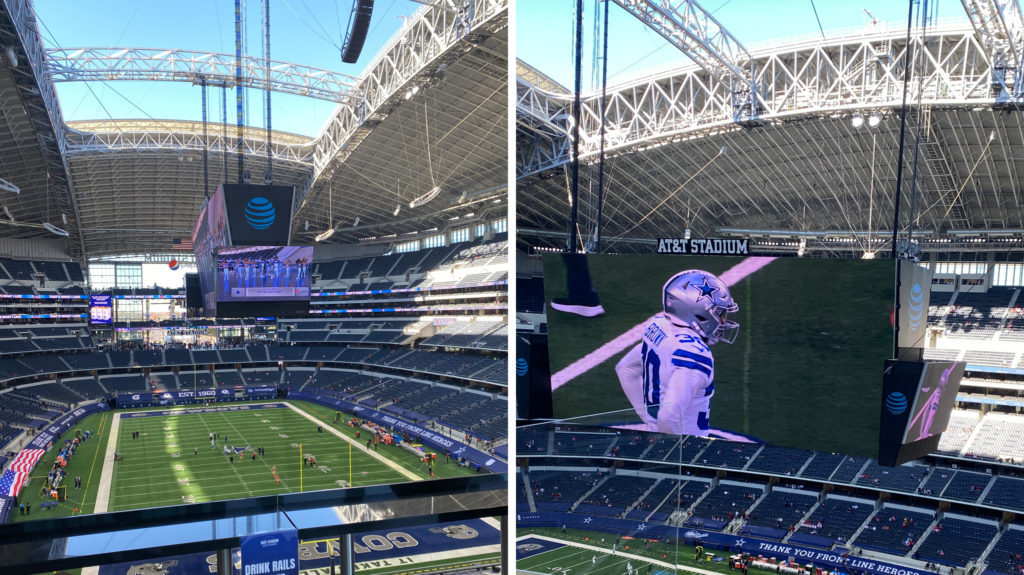 A bird’s-eye view of the huge video board at AT&T Stadium. Photo Credit: Todd Bergman, STR.

To support a DAS design with 2,345 remotes, the AT&T Stadium team turned to longtime partner CommScope, which had been the backbone infrastructure and cabling partner for the original DAS deployment.

“When we did the first one, the DAS had 21 zones, and we thought we overbuilt it,” said CommScope Director of Business Operations Sean White.

Now, there are 238 zones just for the seating bowl.

The amount of power-hungry, bulky telco gear is substantially reduced, producing a low power consumption and huge reduction in head-end room geographical space. According to White and AT&T, the carrier’s internal equipment gear footprint is about four or five racks, down from 30-40 racks needed in a traditional DAS deployment.

“When you eliminate the need for the power and A/C, it’s a tremendous amount of savings for operators,” White said.

“It’s an incredible opportunity to have the DAS be very efficient on power, space, and cooling,” said AT&T’s Sinclair, whose company is the first carrier on the new DAS. “It’s an amazing shift in technology. It’s very expandable, very neat.”

5G and the Future:
Building a DAS to Stand the Test of Time

On top of the new DAS, the stadium also has an AT&T millimeter wave 5G overlay installation, which according to Messick is already producing “ridiculous” speed tests in the gigabit-per-second range. All of the capacity is necessary, he said, especially in an era when teams are already seeing an acceleration of internal technology-related business plans due to the concerns raised by the pandemic.

“We had planned a slow roll for things like digital ticketing, because many people, including suite holders, still wanted paper tickets,” said Messick of plans made before COVID-19.

But with social distancing concerns, the Cowboys (like many teams open to fans last fall) went immediately to all-digital ticketing, and also made the leap to cashless concessions and parking operations.

“But to do all that you have to have rock-solid connectivity,” Messick said. “The timing is right to make a lot of digital transformations. And now we have the DAS to support it.”