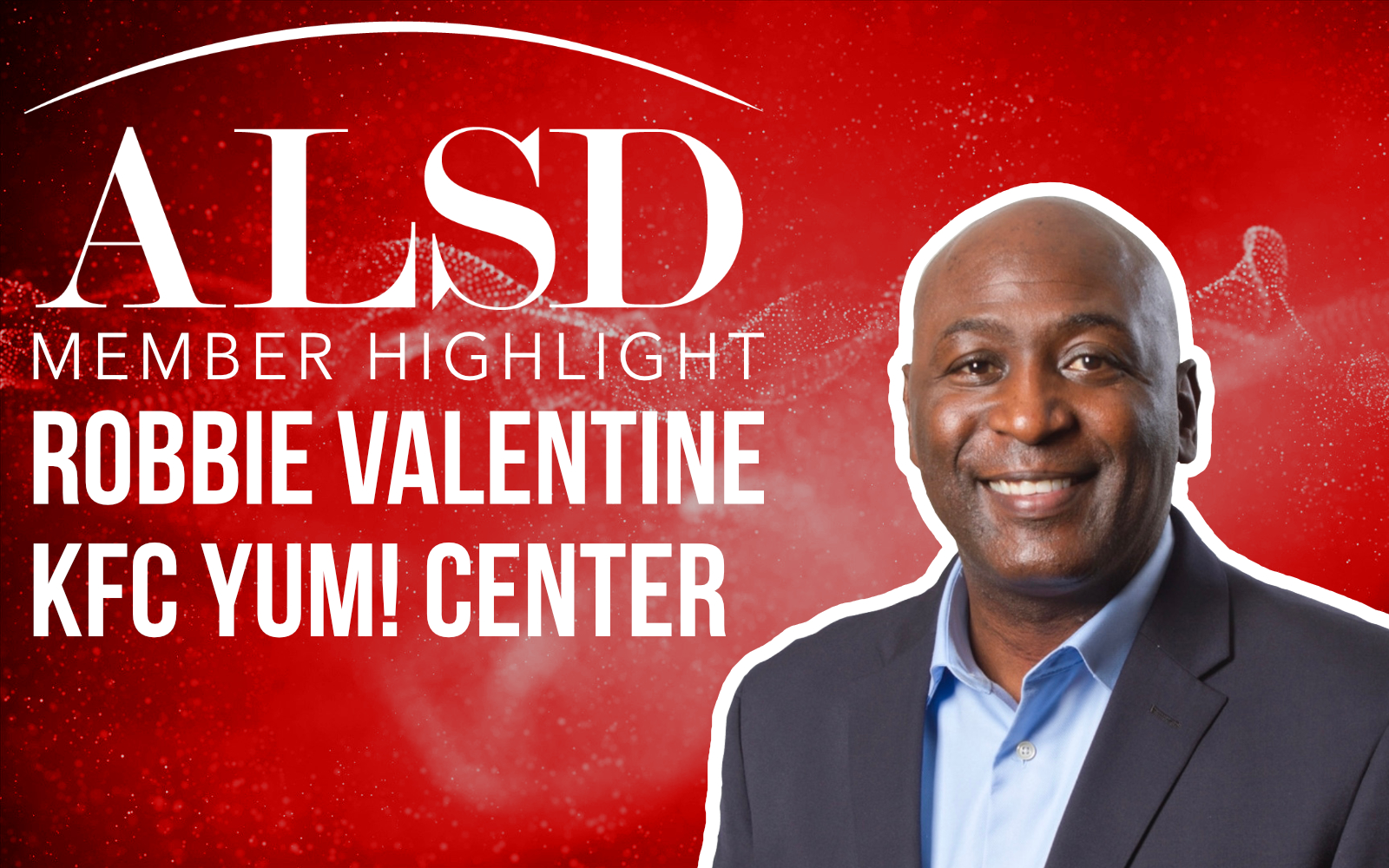 He smiles big. He brings championship energy. He’s earned multiple degrees. He’s passed on lessons learned to tens of thousands of Louisville’s youths. He’s prepared for the return of live events. And he sees a beehive of activity reigniting the industry and his community. He’s Robbie Valentine, Senior Director of Sales at the KFC Yum! Center.

Please Note: The transcript below has been lightly edited for clarity.

In the 1986 NCAA Men’s Basketball Final, the University of Louisville Cardinals captured their second National Championship, defeating the Duke Blue Devils 72-69. ALSD Member Robbie Valentine, a senior forward on that Cardinals team, was a National Champion – a mentality he carries with him to this day, now the Senior Director of Sales at the KFC Yum! Center in Louisville.

“I try to bring that championship energy to the table every day,” Robbie says. “I try to have fun, follow some basic rules of success, and keep it simple.”

While he became a champion to the nation in the madness of March in 1986, those seeds of success were planted by his mother and watered in sweat long before the nets were cut down.

Robbie Valentine grew up in the small Kentucky town of Radcliff, which is in the shadows of the Fort Knox Army Base and United States Bullion Depository which stores the U.S.’s official gold reserves. Aside from the place that protects the gold, Hardin County, Kentucky is also a place that keeps strong family values. Robbie and his six brothers and sisters were raised by their single mother, a woman who prioritized education, praised community involvement, and instilled strong work ethic, all things Robbie pays forward to this day.

How did your childhood and upbringing set you up for success throughout your life?

I grew up in a single-parent home. I like to brag about my mom who did an extremely good job with her seven kids. All of us are very successful. We use no excuses for anything because if she can take care of eight people, including herself, and graduate us all through high school and college, she's a successful person.

I started playing basketball and baseball at a young age. Basketball really opened up some doors for me and my family. I started getting recruited in basketball in the eighth grade by just about every school around the country. I chose the University of Louisville over the University of Kentucky. And where I grew up, it's Big Blue. A lot of people expected me to go to Kentucky. 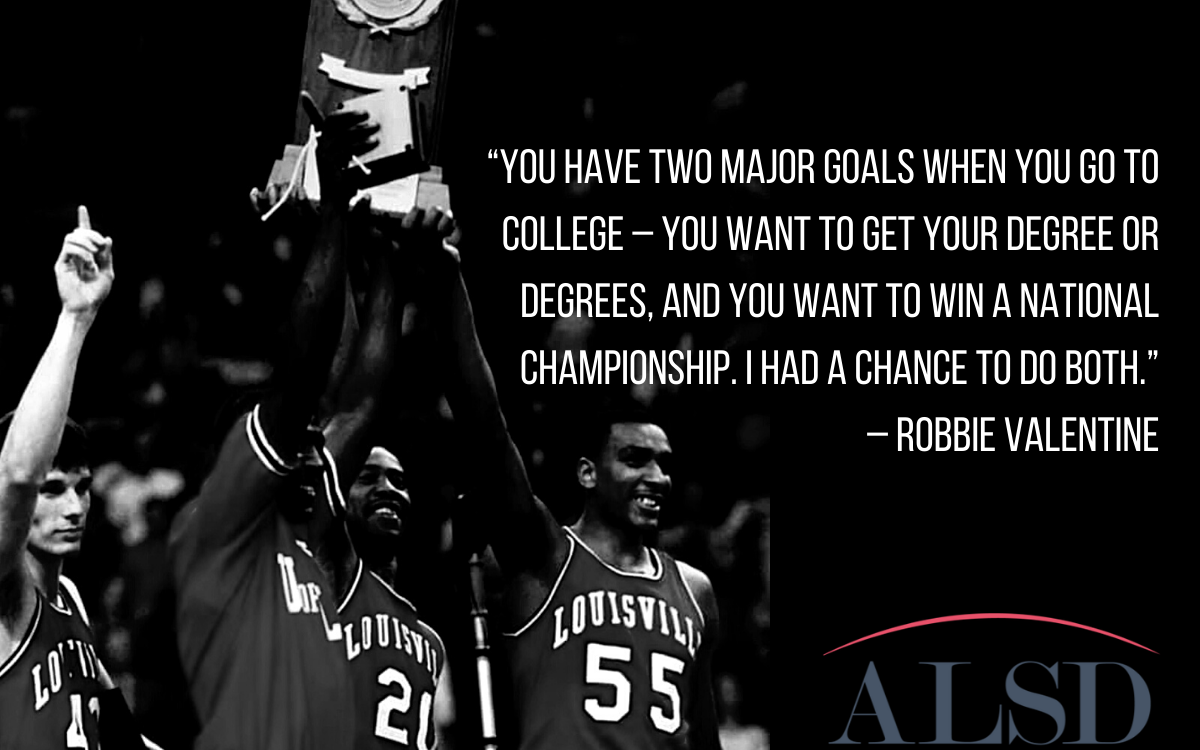 Why did you choose the University of Louisville?

When you get recruited, you visit the same top schools as the other top players. You really get to know a lot of those guys from a young age. We all would talk on the phone a lot more than what people thought. I didn’t want to go to the same school Michael Jordan went to, and Michael Jordan didn’t want to go to the same school Robbie Valentine went to. And then there were some schools you wanted to go to because some of the best friends you grew up with playing basketball were going there, and that happened with me. And so, I chose the University of Louisville.

I had the opportunity to go to two Final Fours and win a National Championship my senior year against Duke. Beating Duke means more than anything. Our first year as freshmen, we beat that same group of freshmen. Then four years later as seniors, we beat that same group of seniors. The Duke players, Jay Bilas, and all those guys, we're all very personal friends. We tease each other. We laugh at each other. That part of it was great.

The other part for me was going to a university where the coach really pushed education as much as basketball. You have two major goals when you go to college – you want to get your degree or degrees, and you want to win a National Championship. I had a chance to do both.

The game of basketball continued to play a significant role in Robbie’s life after graduation, first as a coach, then as a TV analyst, and also as a mentor to tens of thousands of children in the Louisville Metro Area. Many of Robbie’s successes in his post-player life, including now as a salesperson, can be directly attributed to those relationships he built first while playing in front of 20,000 fans at Freedom Hall (the home of Louisville basketball until 2010).

How did your experience as an athlete prepare you for the road ahead?

I did not let anybody walk out the door without getting their business card, and that was as a player. Now as a businessman, I still have those same relationships with those same leaders in the Kentuckiana area. When you are a college athlete and you have an opportunity to meet alumni and shake hands with them, there's job opportunities. But a lot of times, we look straight to professional sports rather than making our success a professional sport. Some people make it to the professional levels, and 99% don't.

I’m an advocate. I speak in schools on a regular basis. I speak at churches. I speak to youth groups. I volunteer in a lot of different organizations and serve on boards. When you’re on a sales team or you work in marketing, that plays a role in your success. I don’t care what we need in Louisville, I can pick up the phone and call that person.

I’ve learned so much through sports, talking to different people, trying to gauge who I want to be as a father, a grandfather, a boyfriend, a role model, a Christian. I give 100% every day to everything I do, and that can mean just being kind to people, just being respectful of people, and focusing on how I can make Robbie Valentine better every day. I put so much pressure on myself to be successful in everything I do, and basketball helped mold that mentality because when you’re a champion, you always want to be a champion and a team player. 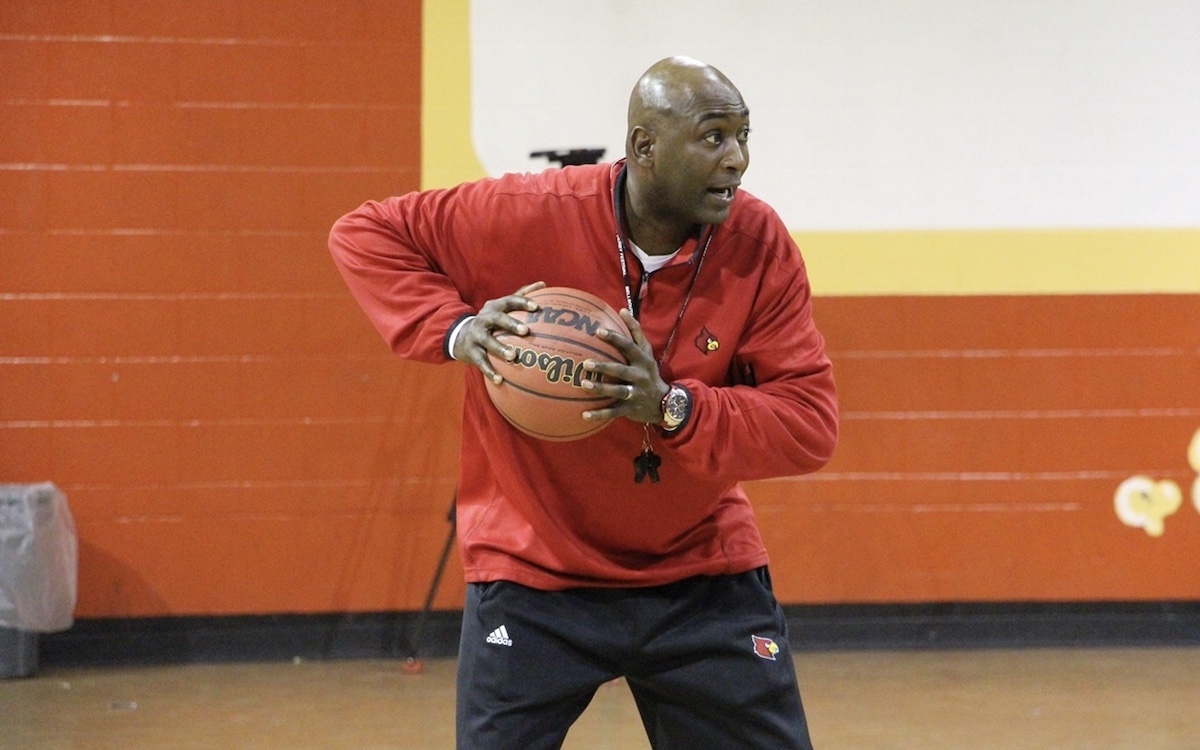 Through Robbie Valentine Enterprises, Robbie worked with over 25,000 students to teach life lessons, basketball skills, and the value of education. His programs blended kids from a variety of backgrounds in the Louisville Metro Area and rewarded them for improvements to their grade point averages.

What was your career path that brought you to your current role?

Then I started Robbie Valentine Enterprises. I worked with middle school students from around the Louisville Metropolitan Area. Over 25,000 kids went through that program. We would take kids who had the label of “at risk.” We wanted to change that barrier and let everybody know these young people can do just as much as kids who have a little bit more at home.

We started this education program where we blended the kids carrying 4.0 [grade point average]’s and the kids barely getting a 1.0 or 1.5. We wanted to have these groups of kids meet one another. They had opportunities to get awards each semester based on grade improvement. And at the finale of the program, if you ended the school year with a 2.5, you got to go on a coach bus to an Indiana Pacer game. You wouldn’t believe the number of kids whose [grade point averages] have gone up.

Living in Louisville now, you go into the banks, you look at the educators, you look at police officers, you look at firemen, you look at doctors, and a lot of them went through my program. I did that program for about 20 years. And then in 2008, I was contacted to see if I’d be interested in working at the KFC Yum! Center in Louisville. I said absolutely, and I’ve been here since day one.

The venue marketplace was the first to shut down and the last to open up in the time of COVID-19. But throughout all the adversities of the past year, the team at the KFC Yum! Center never stopped working to maintain trust with its customers, most of whom kept their dollars on the arena’s books. On the premium side, Robbie has refunded “less than a thousand dollars.” And now that the state of play is starting to tick up at the KFC Yum! Center, the building is primed for a giant reopening in 2021.

How are you communicating with clients now that things are opening up?

I’ve stayed prepared since day one of the closure. You can’t stop. You’ve got to keep working it and working it and working it. Now that everything is starting to open up, we’re communicating with [clients] more. I want them pumped up like I am. The emails and the phone calls that I’ve given to them aren’t necessarily about ticket sales or the KFC Yum! Center. I’m just calling to see how they’re doing, if they’ve been vaccinated yet, how their kids are doing, how their mom and dad are doing. That’s big when you ask somebody how their mom and dad are doing because in some cases, people haven’t seen their mom and dad in six months to a year, so it turns into a very good conversation.

A lot of people have changed over the last year, good and bad. I want them to see another jolt of positivity from the Yum! Center, from Robbie Valentine, letting them know that it’s coming soon. We have some unbelievable things that are going to hit soon. 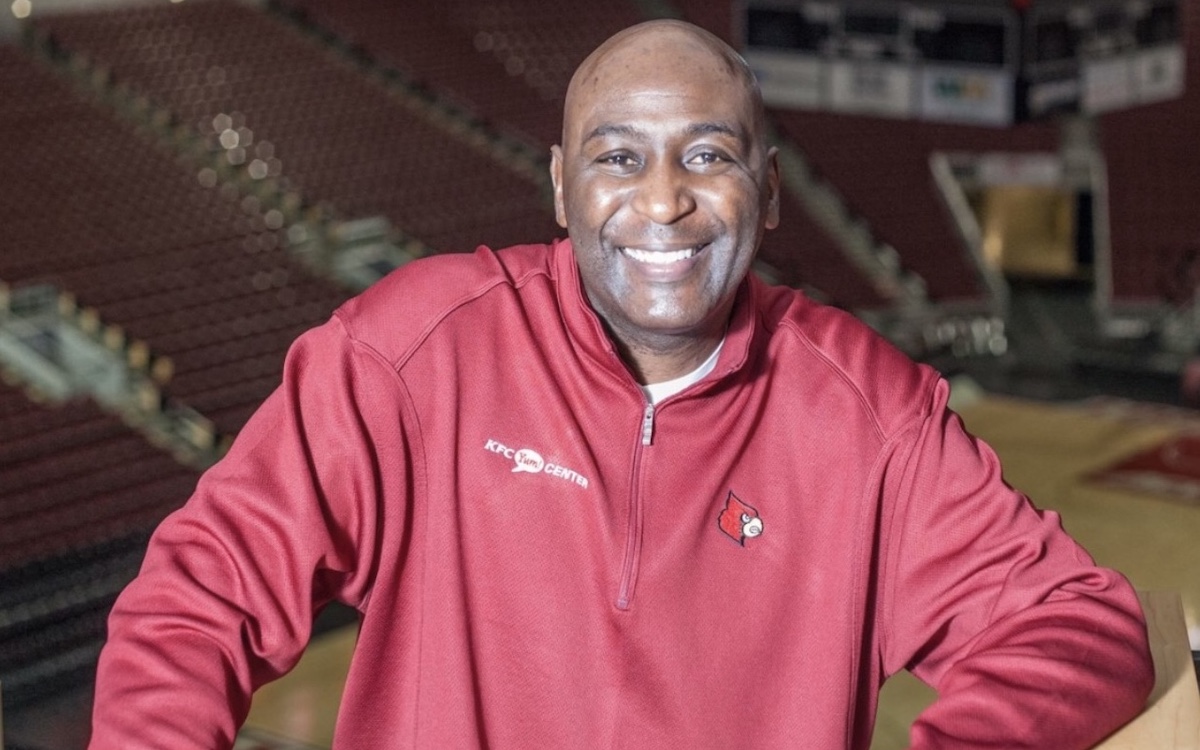 Robbie Valentine anticipates great interest for events as the KFC Yum! Center reopens to fans: “When tickets go on sale and you start announcing events, I think it’s going to be something this industry has never seen before. It’s going to be great because people are eager to be around each other.”

What’s the current state of reopening for the arena?

We had men’s and women's basketball for the entire season, which was a great season on both ends. And since then, we’ve had [Professional Bull Riders] for two nights, which was our first touring event in the Yum! Center since covid hit us a year ago. And then we just had Mike Epps (In Real Life Comedy Tour) on April 10th.

Hopefully we’ll start getting some larger attendance because right now, we're at 5,600. We're hopeful to get some more numbers in there and keep everybody safe. I think people are eager for some live music and to have a good time.

What do you expect the demand to be from the corporate community and the high-net-worth individuals and donors throughout the rest of 2021?

I’ve told everybody this. If you have not prepared for it, you’re going to get hurt by it. This thing’s going to move faster than coronavirus, I can promise you that. It’s going to be beautiful. It's going to be something we've never seen before.

This virus took us down. Not just the company. I’m talking about the nation, the world. It’s taken us down. So it’s going to be a little different, but when tickets go on sale and you start announcing events, I think it’s going to be something this industry has never seen before. It’s going to be great because people are eager to be around each other.

The only thing I can say to people that work in our industry is just be ready because it’s going to come fast, and people can spend money. Just show them a good time and try to give them as much as they give you.

Robbie Valentine is a member of the board of advisors for ALSD’s Sports Venue Design & Build Forum.