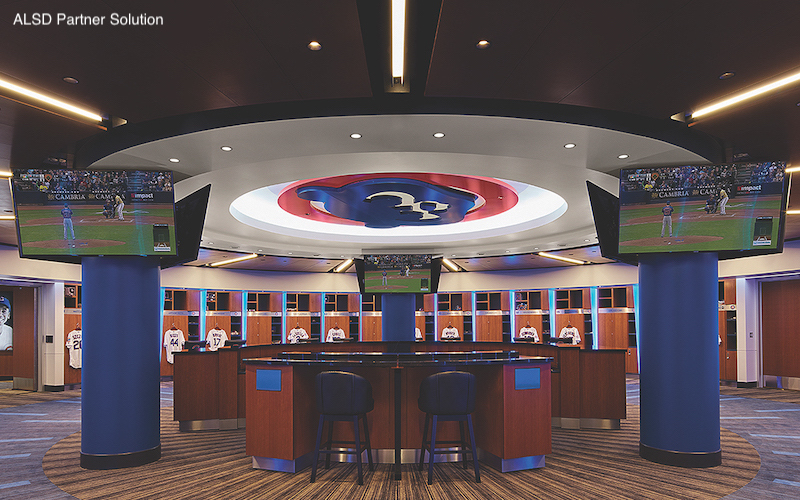 The Audacy Wireless Lighting Controls system was first installed into a 30,000-square-foot area of the iconic Wrigley Field ballpark as part of its recent restoration and expansion, also known as the 1060 Project. The system was deployed in the Chicago Cubs clubhouse, which opened to the players on Opening Day 2016, and it has quickly become one of the most advanced clubhouses in baseball.

“[Audacy is a] significant leap forward in wireless energy management control technology. We’re impressed by both the system and IDEAL Industries’ engineering and customer service team, which has met every deadline and challenge thrown their way. Their product support consistently exceeded every other system we reviewed.”

Previously, the clubhouse area was much smaller and had outdated lighting with no controls. This area was tremendously expanded and now houses many features unique to this installation.

Features include the Cubs logo, which can change colors directly from the Audacy platform to be in tune with the mood of the players prior to or after a game, as well as a lit “W” directly outside of the clubhouse that is illuminated following a Cubs win.

In the clubhouse application, the Audacy Wireless Lighting Controls system provides substantial energy savings to spaces that had previously housed no lighting controls. Players and employees are now able to have more granular control over personal spaces that they are using every day.

As Rice said, “The Audacy system has given us more flexibility even beyond what our original scope was for the project.”

Upon completion of the clubhouse, the Cubs organization extended the Audacy Wireless Lighting Controls system into its newly constructed 125,000-square-foot, six-floor office building for employees, completed at the beginning of the 2017 baseball season.

The Audacy system was placed into every floor of the building, which includes several meeting spaces and the main lobby area with its unique, constantly changing video board. Within the office building, the Cubs organization is able to utilize the system’s capabilities of occupancy, vacancy, daylight harvesting, scene selection, and remote system control.

With the Cubs organization’s open office concept that fosters flexibility and growth of space, and the Audacy system’s web-based technology, the result is an incredibly flexible solution that can grow with the organization as it expands with the 1060 Project.

This venue solution was published in partnership with Audacy Wireless Lighting Controls, a division of IDEAL Industries.

Audacy is advanced wireless lighting control that changes your space. It’s a system designed to be as future-proof as it is innovative, giving you the power to see your world in a better light. And it’s all from IDEAL Industries, Inc., the family-owned, professionally-managed company that’s been advancing industries and providing unparalleled customer service to the trades for more than 100 years.

To learn more, contact Stephanie Wymore at stephanie.wymore@idealindustries.com or 815-895-1161.