Starting from the inside-out, Ian Ayre and his design-build team are constructing a venue and entertainment product that functions for a multitude of events and serves all fan segments for Nashville SC, from its premium seat holders to supporter groups.

Editor’s Note: Executive Fishbowl is an unfiltered, minimally edited interview series, in which the ALSD travels across the sports and entertainment landscape to bring the industry's top decision makers out of the corner office for open, candid conversation about their venue’s big headlines and fine print. These exclusive insights inform the holistic picture and provide context for disruption in the venue marketplace.

You mentioned the premium products. The core of our membership is obviously interested in the premium seating areas of the new venue. What types of products can we expect in your building?

We have all the typical offerings of suites and lounges, but for us, it was about trying to bring different flavors to that suite of products and think about what do these facilities do on gameday, but also, what do they do every other day of the week.

Anyone who knows Nashville knows the honky-tonks down on Broadway. We’re certainly thinking at this stage about bringing some of that truly Nashville flavor to at least one of those big lounges, almost 1,000 people in an environment with live music and that Nashville feel and Nashville food. Maybe another is more around that sports facility.

“For somebody looking to make a decision about coming to our games, there is a choice for every pocket, every palate, every budget, and that’s how we’ve designed it out – having a broad mix of different things.”

The reason we started in both of those two areas was we also feel Nashville is growing, there’s lots of choices, but big venues on a big scale for that type of thing are less prevalent and perhaps that creates an opportunity on non-gamedays for us to utilize that space well.

We’re doing some very cool stuff on the concourses even for general admission, so not forgetting about the general fans. I talked about the eclectic mix of people in Nashville. In some of our research, one of the two consistent messages was about food. People said, well, I can come to your games, and I like soccer, but maybe I’m not the burger and hotdogs and coke fan. Maybe I want something else.

So having the best hot chicken sandwich or the best burrito or the best pizza available around Nashville and thinking about all these diverse and different cultures and their food needs, and in some cases, food demands around kosher food or halal food, and then trying to weave that into the experience of what the concessions look like and what the mix of food is and what music is going.

You can’t do anything in Nashville without music, so there will be music everywhere. We have a 68,000-or-so-square-foot plaza outside the stadium, which we want to bring to life, so trying to weave all these different products together, but ultimately for somebody looking to make a decision about coming to our games, there is a choice for every pocket, every palate, every budget, and that’s how we’ve designed it out – having a broad mix of different things. 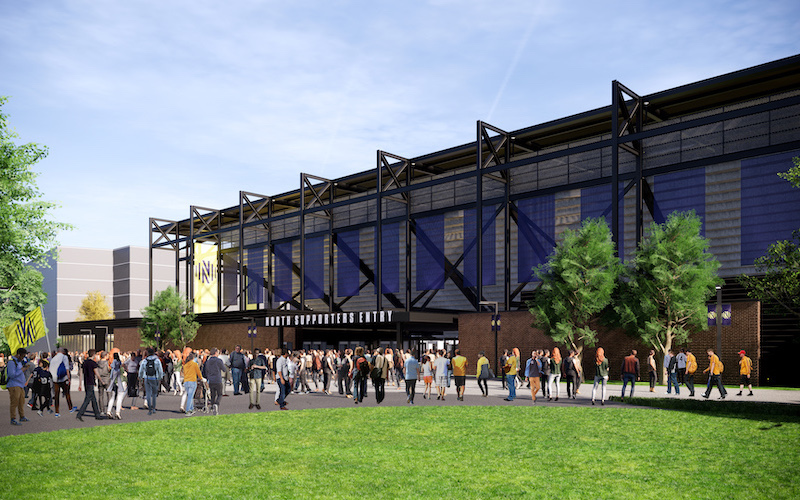 The Nashville SC supporters, named “The Backline”, will enjoy safe-standing rail seating with capo stands for elements like drums and tifos.

Tell me about your supporters’ groups. What are their seating arrangements going to be in the building? And how are they going to add to the experience of everyone coming to a game?

I would describe them as being like the energy plants of the stadium. Not only do they bring it to life, they are the life of a game. We’ve been very fortunate that our USL team, which we’re still operating today has pulled together a number of different supporters’ groups. And more recently, we’ve engaged as a club with them to help bring them together as a collective to form a single overarching entity that will represent that supporting section of Nashville.

It’s got a new name. They call themselves “The Backline”, which is a great play on the music heritage and also on the soccer heritage. We have somebody on our team who manages that relationship.

And in terms of the stadium, we’ve been talking to them about the functionality of the supporters’ section. It’s going to be all standing with rail seating. It’s going to have the right sort of capo stands with the ability to put drums and all those good things, to do tifos.

We’re very fortunate because we start from a blank sheet of paper as we’ve said, but I came from a team that is 125 years old, and it’s hard to change much. We’re not trying to change anything. We’re trying to create things. And it’s quite exciting to work with a group like that who is as excited as us about making the support for Nashville the best it can be. And so, we have a very open mind. We have a very healthy dialogue.

We don’t want to unveil too much, but we’re doing some very cool stuff with our supporters that we know will be unique to Nashville and will be the sort of things that identify us across Major League Soccer and hopefully across global soccer. 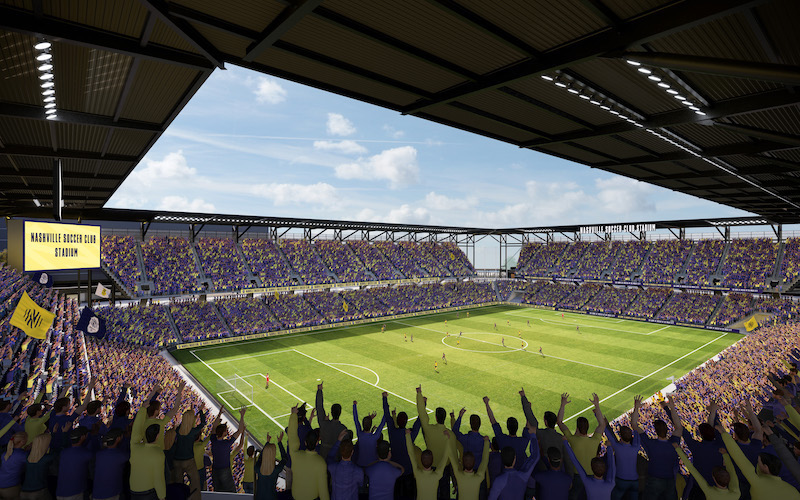 Ayre explains smart venue design from the inside-out: “And what does that mean? It means that it can look pretty... but it has to work functionally.”

When you approach designing a venue, I use the phrase somebody much smarter than me taught me many years ago, which was when you’re building a venue for sports, you have to build it from the inside-out. And what does that mean? It means that it can look pretty, and it can be shiny and great, but it has to work functionally. And so, what we tried to do from the outset was think about every use for this facility.

We expect to have concerts here. We expect to do stuff on non-gamedays. We expect our stadium to be a community asset that other people can use for other events at other times and do other great things for the community of Nashville, so we designed with that in mind.

Whether we’re thinking about the functionality of a single lounge or thinking about the functionality of the whole environment, we’ve tried to think that far ahead, so what seem like small things – the ability to drive big trucks onto the field to put in a lighting rig for a concert, having our locker rooms for our soccer teams and additional locker rooms to have multiple teams and have tournaments, having dressing rooms and green rooms for concerts for artists – they’re all part of the design. That type of thinking makes for a really exciting future when the venue really comes to life and Nashville Soccer Club comes to life.

Watch Part One of our exclusive interview with Nashville SC CEO Ian Ayre.