A Conversation with Kristin Miller 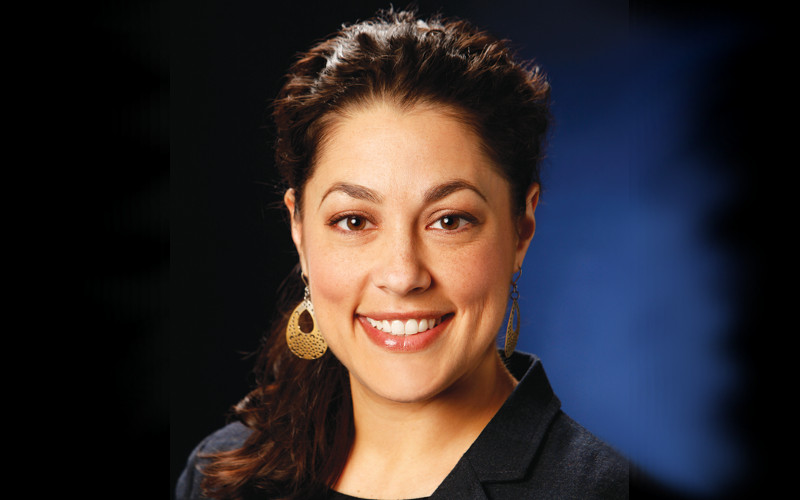 A well-placed suite director once told me Kristin Loeser is the LeBron James of suite services. Get to know this All-Star as she talks about her upcoming wedding, her involvement in community service, her theatre degree, and her guts to move to New York City with no job, no friends, and only two suitcases in her possession.

SEAT: By the time people read this conversation you’ll be Kristin Miller, not Kristin Loeser. Today, six weeks from the big day, how’s the wedding planning coming along?

Kristin: It’s going really well. It’s a destination wedding, so there are not as many moving parts as there are with a traditional wedding. The ceremony, the photos, the reception, everything is self-contained on the resort. So there’s not a lot of stress involved. It’s more excitement and anticipation at this point. Part of me is freaking out that I’m not freaking out.

SEAT: Where are you going?

Kristin: The Hard Rock Riviera Maya, about an hour south of Cancun. It’s all-inclusive, so we’re just going to kick back. We’re looking forward to spending a week-plus with our family and friends.

SEAT: Are you looking forward to having a new surname that’s nearly impossible to mispronounce?

Kristin: I don’t know if I’ve ever met anyone who pronounced my name correctly the first time. I even have clients that after five seasons with the Brewers still can’t get it right. I don’t have the heart to correct them after the umpteenth time.

I am known around the office as Lazer (the correct pronunciation). My friends call me Lazer. So I’ll probably always answer to that, but I am looking forward to having a name (Miller) that’s easier to pronounce.

SEAT: You’re active with the local YMCA. Would you care to share your involvement?

Kristin: Back in 2006, I got connected with the Sponsor-A-Scholar program and became a mentor to a student who had just entered her freshman year of high school. She was one of nine children in an immigrant family. Her parents didn’t speak English. They had multiple jobs. One of her siblings was special needs. Besides her teachers, I think I was the only one-on-one adult interaction she had. I was filling a role that she didn’t have in her life at the time. We spent four years together on a regular basis, and I learned just as much from her as she did from me. It was beyond rewarding.

Once she graduated, which was my first season with the Brewers, I didn’t take on the challenge of mentoring another student, knowing the amount of hours and commitment required to work in professional sports, as well as the energy and effort required to be a good mentor. I didn’t want to shortchange the student. But I ended up working with the director of the program to come up with a fundraiser, a silent auction, and this is my third year chairing that event. I was blessed to have not experienced the hardships that a lot of these kids have, so I want to give back any way possible.

SEAT: It sounds like when you’re involved in something, you’re going to be committed 100%.

Kristin: Once I do commit to something, you’re right, I commit to it 100%. It’s why I’ve been teased around these parts for my support of the University of Minnesota. I’m a Golden Gopher alumnus living in Badger country. Wisconsin is good at a number of sports. It would be easy for me to jump on the Badger bandwagon, but I will not do that. Clearly, I’m a very loyal person, and this year I might have the last laugh.

SEAT: What about the University of Minnesota steered you up to Minneapolis for college?

Kristin: I wanted to push myself beyond my comfort zone. I knew I wanted to go away for school, but I had to be realistic about what my family and I could afford. The fact that Minneapolis is far enough away to be away from home, but close enough that I didn’t have to fly to get home, made it attractive.

SEAT: You had a stint in New York City shortly after college. What took you to the Big Apple?

Kristin: I graduated with a theatre degree and stayed in the Twin Cities for a year after graduation. There are a lot of companies headquartered in the Minneapolis area, so there was a lot of on-camera work to be had – doing commercials for Best Buy and training videos for Target.

I went to visit a friend in New York and while there, I had that I have to be here moment. I was living comfortably as an actor, which usually doesn’t happen, so to upheave my life was a little crazy.

I applied to a school in New York called the Ward Acting Studio. I promised myself if I got accepted, I was going to do it. When I was accepted, I got rid of my car, got out of my lease, took two suitcases, and hauled myself to New York.

SEAT: Hold on, I have to make sure I just heard all this correctly. You moved your life to New York to be an actor?

Kristin: Looking back on it, it seems insane. As a theatre major, I thought I was going to move to New York and further my career. I wasn’t aiming for Broadway. I can’t carry a tune in a can. But I knew I wanted to challenge myself in a way that I didn’t think I could do by staying in that comfort zone of the Twin Cities.

I moved to New York without a job, without knowing anybody. I found a place to sublet for a few months through one of the other students at the school. I showed up in Astoria, Queens, New York with two suitcases, started taking classes, and worked odd jobs.

SEAT: I think I’ve seen that movie before.

Kristin: I could write a book of the insane instances that happened to me in New York. I lived with a lanky, boisterous Republican from Texas who loved to blast Frank Zappa and do yoga at all hours of the day. He posed for an artist in Manhattan who liked to read auras. His best friend from high school was a lesbian who always tried to hit on me. And his mom would come and stay with us for extended periods. It was a kooky time.

SEAT: Mission accomplished I’d say if you wanted to stretch yourself and see what else is out there in the world.

Kristin: I don’t have any regrets. I look back on it now, and it’s so ironic. I like to create a blueprint that shows the direction that I’m heading, which is so not what being an actor is. It’s no wonder why by the end of it, I wasn’t enjoying it anymore.

Being an artist is all gray, and I try to live in the black and white as much as possible. From that experience, I ultimately learned who I am, what drives me, and what I get enjoyment from. I love that I had that experience, but it brought me back to Milwaukee a very poor twentysomething.

Kristin: Try telling your parents that. When I moved back into my parent’s house, my bedroom was now the sewing room.

SEAT: You were pulled back to Milwaukee for the reasons just discussed, but what about the city keeps you happy there?

Kristin: Ironically, as a kid I couldn’t wait to leave Milwaukee. But after having experienced Minneapolis and New York, I realized the grass wasn’t so much greener; it’s just different grass.

Milwaukee is a very different city than it was when I was a teenager. It has grown exponentially. There is so much happening in Milwaukee now that piqued my interest enough to where I wanted to get a job and see how things went.

I was always open to wherever the wind blew me until the opportunity with the Brewers came up. I thought I had a one in a million shot, but I threw my name in the hat. I had nothing to lose, and it worked out.

SEAT: I’m sure your family is happy it all worked out.

Kristin: I think my dad wanted me to get this job more than I did. He grew up in Milwaukee and remembers back to when the Braves left town. Baseball has always been such a strong part of who we are as a family.

SEAT: I have to ask you about being the only girl on your Little League team. What do you remember from that experience?

Kristin: I have always loved baseball. I remember teasing the boys that I didn’t have to wear a cup. I didn’t completely understand what that meant, but I knew they didn’t like doing it, and I didn’t have to do it. I also remember the coach for one team we played. If I was pitching, he’d tell his team, “oh you don’t want to let a girl strike you out, do you?” That was motivational.

SEAT: Before we close, I don’t want to neglect your ballpark. Miller Park is a spectacular venue. I want to ask you about one of your recent renovations – the SKYY Lounge. Can you walk me through that premium space?

Kristin: The SKYY Lounge sits directly behind home plate on the club level. When we did the renovation before the 2013 season, we wanted the space to become a destination. Club seat holders, suite holders, and field diamond box holders (first eight rows between the bases) are the only folks with access to the SKYY Lounge.

We wanted it to be a meeting place where people gather before the game. We offer a variety of food options; there’s always a carving station, and you buy a premium drinks.

On non-gamedays, the space is used quite a bit for large functions, everything from weddings to luncheons. For large events with 200 to 300 people, it’s a beautiful space with the floor-to-ceiling windows. We have our own suite holder tasting and reception there every March.

Would you like to network with Kristin?
ALSD members can find Kristin's contact information in the 2014 Fall issue of SEAT Magazine.