A Conversation with Rachael and Keri Johnson 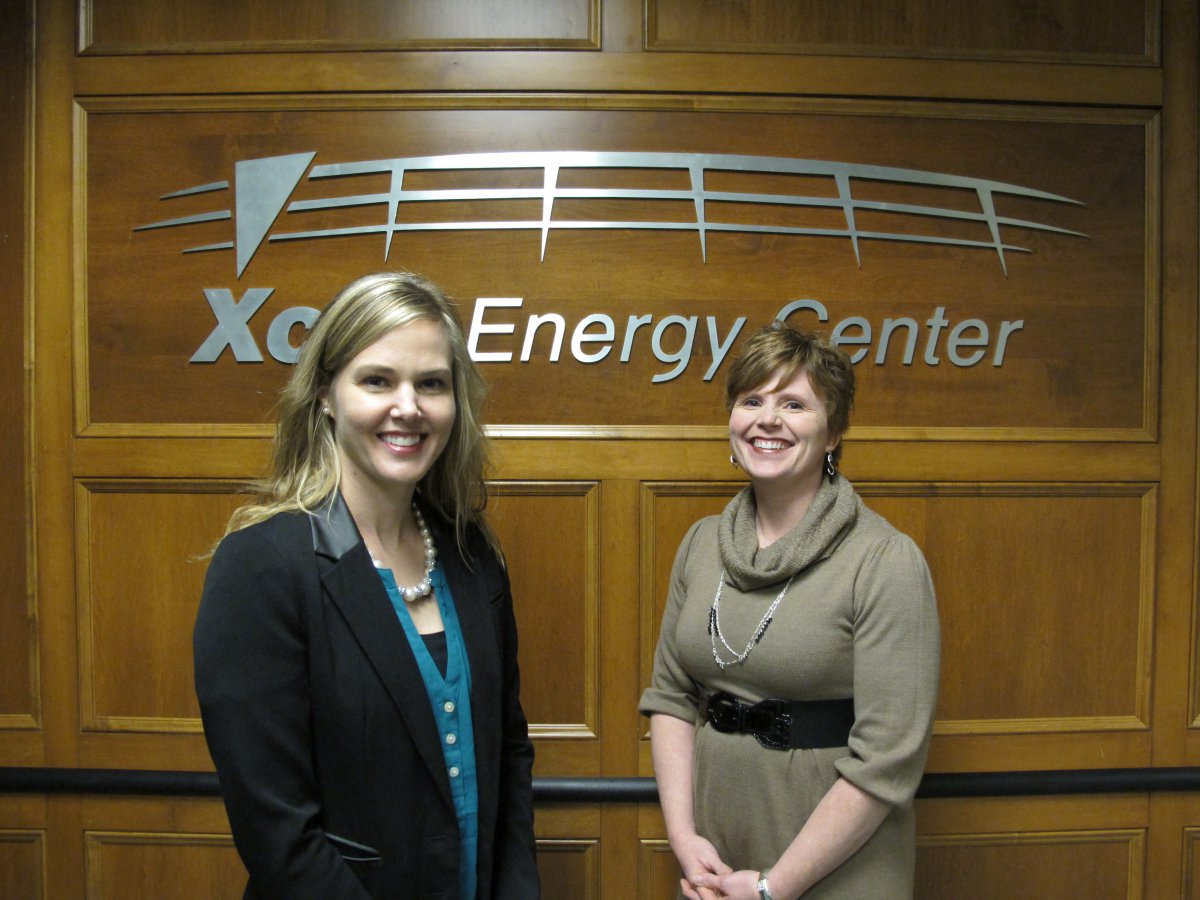 It takes all types to run a business. Crazy ideas as well as a conservative mindset are both needed for a balanced strategy. Meet Johnson & Johnson, the yin and yang of Xcel Energy Center services. The take-action leader and the methodical planner have enjoyed longstanding success and friendship in the Minnesota wild.

SEAT: How are things in Saint Paul today? Are you wearing your sunglasses and sunscreen?

Rachael: That’s balmy compared to yesterday when it was negative 20.

Keri: There’s a lot of ice fishing. And there’s broomball!

SEAT: Are these activities that either of you are participating in?

SEAT: Then you’re my kind of gals. Are you both originally from Minnesota?

Keri: I was born and raised here. I grew up in a small town called Barnesville, and I moved down [to Minneapolis-St. Paul] when I was 21. I saw an ad in the newspaper for a part-time job at the Target Center, where I was hired to work events on the suite level as a concierge. That’s how it all started for me.

SEAT: Did the Wild scoop you up from there? Or was there a stop in between?

Rachael: Well, that kind of leads into me in a weird sort of way.

Keri: Yes, we have a long history with one another.

Rachael: While I was going to school at St. Cloud State, which is a local college about 45 minutes away, I was also working as an usher at the Target Center. I worked my way up into their complaint office, which was like their guest services desk. I worked with the ticket office quite a bit, handling duplicate tickets, tickets that were stolen, those types of things. The box office ended up hiring me as a full-time supervisor. And that led me to meet Keri.

Keri: Every time I had an issue with my suite tickets, I would have to go to Rachael. So I’d come down to visit her every couple of days with my pile of ticket issues.

Rachael: [Laughing] And then I would have to undue all of her mistakes.

Keri ended up leaving the Target Center to pursue other things, and they offered her suite coordinator job to me. Then the box office manager who hired me ended up coming over here to the Wild, and she encouraged me to apply for the suite manager position here.

After a few years with the Wild, I had gone through a couple of coordinators. I had remained in contact with Keri, who was in Spain at the time. I knew she was looking for something, so I called her to tell her I had a position open and wanted her to come back to the States and work for me.

Keri: I came back and walked around with [Rachael] during a game to see what I thought. And of course when the music started and the team hit the ice, I had goose bumps and said, “Here we go again. Put me back in.”

Rachael: After living in five different states and one different country, Keri came back to where her true calling was in the events business.

SEAT: Keri, I assume that Spain isn’t a city in Minnesota. We are talking about the country, right? What took you over to Spain?

Keri: I actually returned to school to complete my elementary education degree, and there was an opportunity for me to go over and spend some time at The American School of Madrid. I was supposed to be there six weeks. I got off the plane with my suitcase and my dog, not speaking a lick of Spanish, and said, “This could be the dumbest thing that I have ever done in my whole life.” I remember being in the airport saying, “What am I doing?” But I ended up staying there for a year.

SEAT: When you look back on it now, do you still think it was one of the dumbest things you have ever done?

Keri: I’m so thankful that I had the opportunity. It was incredible.

SEAT: From the outside looking in, I’ve always admired your department and the special relationship you seem to have. To what do you attribute the longstanding success that you two have had together?

Rachael: It starts with the fact that we are good friends. But I also think that we are a good balance. I’m more of the take immediate action kind of a gal, and Keri is a more methodical planner. So she keeps me grounded and makes sure we’re thinking things through and making the right decisions for the right reasons. Our personalities work so well together in the business world because we keep each other in check.

Keri: Sometimes when I come up with a crazy idea, it takes Rachael a while to come around to it.

Rachael: I am usually more conservative.

Keri: I’m the more out-of-the-box one. And usually, we find the right balance.

Rachael: I will say that a lot of [our success] comes from the culture of our organization here at the Wild. This is the best team I’ve worked for. Everyone is out to help each other. And at the end of the day, all of our decisions are for the good of the guest. That’s what I admire about this company.

SEAT: What’s been your greatest accomplishment here with the Wild?

Rachael: One of the bigger accomplishments within this role is that in 2006, we were asked to take on the guest services role in addition to the suites. So not only do we service the suites, but we also service all the guests in the facility, and we manage all of the front-line staff.

We have a pool of 400 part-time ushers; we have a contract with a security company that reports to us; we have our first-aid staff that reports to us. Anything that touches the guest front-of-the-house falls under us. I think that’s unique to the industry. I don’t think many other teams do it this way. It can take time away from servicing the suites, but we have other support staff that works with us. I have five full-time employees: Keri, whose time is split as well, then two dedicated to suite services and two dedicated to guest services.

SEAT: Do you both live fairly close to the arena? How long of a drive home is it after a game?

Rachael: I have a 45-minute drive home, with no traffic and in good weather.

Keri: I’m a half-hour away.

SEAT: Forty-five minutes in what direction? Do you live in Canada?

Rachael: I live on nine acres of land up there. It’s nice because it still feels like a neighborhood. Most of the acreage is wilderness behind my house, but it’s not like my nearest neighbor is three miles from me. I still live in a neighborhood.

Keri: In the summertime, she’ll come into the office very excited and say, “I got to mow my lawn!” She loves mowing her lawn.

Rachael: I do love it. It’s therapeutic.

It works out great. My kids can camp out in the backyard and feel like they’re in the middle of the woods, yet there is a bathroom close by. We’ve had a lot of Girl Scout sleepovers back there.

SEAT: How many kids do you have?

SEAT: How do you continue to be a part of their lives and their activities, even in the middle of the season?

Rachael: Two things. One is a supportive husband, and two is a supportive boss. The work-life balance has been really good actually. My husband is available in the evenings to run the kids where they need to be. And my boss is flexible during the day. If I want to volunteer on a field trip, I can take some time off to go and help out there. So it’s support from both ends.

Work is not getting jipped by any means. There are weeks where we are living here. I see Keri much more than I see my husband or my kids. But you have to remember my kids grew up in the industry, so it’s just normal for mom to be gone. Last night I was talking to my son, who has his only music concert of the year coming up. I told him that I’m not going to be able to make his concert because we’re taking our suite holders to Nashville at the end of February, which just happens to be when his music concert is. And he just said, “Oh that’s ok. Is dad going to be able to make it?” Here I am feeling bad, but to him, it’s the only way of life that he knows.

SEAT: What about you Keri, do you have children? Do you like to mow your lawn?

Keri: No, I really don’t like to mow my lawn. I do have a three-year-old little girl. My husband also has an unpredictable work schedule and travels. So in my case, I’m lucky to have a long list of supportive friends and family that are lucky enough to spend time with my daughter when mom and dad are away. It’s tough some days, there’s no doubt about it.

Rachael: When you’re away, it makes you appreciate your kids so much more.

Keri: Outside of the office, I just spend time with her. I know that doesn’t sound very exciting, but that’s what I want to do. There are times when my daughter doesn’t sleep well at night. But I don’t mind crawling into that twin bed and snuggling up with her and her llama.

SEAT: Did you say her llama?

Keri: She doesn’t have a teddy bear; it’s a llama. Like the Llama Llama story Llama Llama Red Pajama.

I completely agree with Rachael. I’m so lucky to have a supportive manager and vice president who understand the importance of family.

Rachael: I will say that [the long work hours] have prohibited the Rachael Johnson family from getting a dog. As much as my kids have tried to get a dog, I’ve had to say absolutely not. No one would be home to take care of it.

My kids actually put together a ten-page report explaining why we needed a dog, what kind of dog we should have, what the investment would be, the shots that are needed. And I still had to say no, which is so hard for a mom. But there’s just no time.

SEAT: I hope you kept that report. They’re going to love seeing that in a few years at a high school graduation party.

Rachael: Oh, I still have it. It was so cute. It was all handwritten of course with pictures of dogs that they had cut out. They didn’t have any way to bind it, so they took some yarn, poked a hole in it, and tied it together.

SEAT: That might be the greatest thing I’ve ever heard. I think that’s the perfect place for us to stop. I’ve already taken up much more of your time than I had planned to.

Keri: We could talk for hours.

SEAT: I could listen for hours. I look forward to catching up again over a cocktail in San Francisco.

Would you like to network with Rachael and Keri?
ALSD members can find their contact information in the 2015 Winter issue of SEAT Magazine.