The President of the Carolina Panthers recently spoke with the ALSD about his well-traveled career and nearly three decades of positive impact on the sports and entertainment industry.

Tom Glick has enjoyed 28 years of prolific work in the sports industry, most recently named as the new President of the Carolina Panthers. He began in the minor leagues and has worked his way through nearly every sport and league and on lands near and far, delivering sports and entertainment on five continents, including ten years in the UK running Derby County FC and then City Football Group (anchored by Manchester City FC, one of the largest brands on the planet).

With this résumé in mind, the ALSD is thrilled to announce Tom Glick will receive the 2019 ALSD Visionary Award at the 29th Annual ALSD Conference and Tradeshow in Chicago. Let’s learn from this man of leadership and vision.

Editor’s Note: The transcript below has been lightly edited for clarity.

Your story is what intrigues us most. Explain your rise in the sports industry, starting in the minor leagues, emerging on the international scene, and now taking the reins as the President of an NFL franchise. What is it that has gotten you to where you are today?

It is impossible to pick one particular thing. I may have gotten into sports for the wrong reason, which is that I love sports, which isn’t a bad reason, it’s just not enough of a reason. 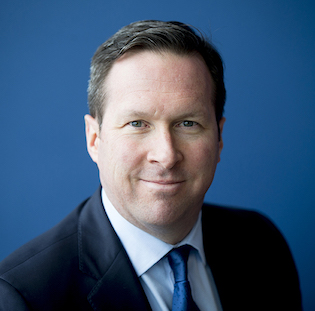 What I found out very early, during my job in the minor leagues right out of school, was that I was curious and passionate about the business of sport and how an organization runs. Later on, I learned what made a high-performing organization.

I have had this passion for the industry that hasn’t faded since it started in my early 20’s. I’ve been attracted to new projects and have learned from smart people. I have been very fortunate to have great mentors and with them have been a part of some really exciting projects, building ballparks, turning around teams, in multiple sports, multiple cities.

Ultimately and more recently by moving abroad, living in the UK, I’ve learned a new sport and a new country. In my second role there with the City Football Group, I also learned the business and the cultures and the sport in countries like Australia, Japan, Spain, and Uruguay, where they have teams. I also learned in markets where they have fans of Manchester City and the Premier League like Indonesia, Malaysia, Singapore, China, South Korea, and multiple countries in the Middle East and Africa.

It has been an ongoing adventure, and I think that adventure, learning, leading fun and fulfilling projects, combined with my ongoing passion for the business led me here to the Carolina Panthers and David Tepper, our new owner.

I am incredibly excited and privileged to have a chance to work with [Tepper]. The Panthers are a young NFL team, turning 25 [years old] next year, a quality franchise with massive support from sports fans in the Carolinas and such a bright future. I am excited to help work with the team here and take it onto the next part of its journey.

As you’ve alluded to, you have a global perspective, making you perfect for ALSD’s Visionary Award, just as our association embarks on international markets and conferences. What is the global nature of the fan experience? What seems consistent across oceans in today’s fans and clients?

There are several things common and universal. Sports are a very important part of people’s lifestyles and their day-to-day lives. I’ve seen this universally from Indonesia to Singapore, in Beijing or in Los Angeles.

“Sports everywhere – just like here in the US – are a big part of people’s lifestyles. And now more than ever, and hugely throughout Asia, experiences are digital, resulting in a high level of brand penetration.”

You’re in a taxi ride, on the subway, in a pub, in an office, and you see – and I’ve seen close-up – that sports bring people together. It’s an experience, a shared memory, and these things are consistent country to country, continent to continent.

Countries around the world follow the biggest soccer leagues, like the Premier League and clubs like Manchester City. You can go into Southeast Asia, Hong Kong, China, or Vietnam with a booming market of 95 million people, at 7:00 or 8:00 p.m., and their TVs are tuned in to watch the lunchtime kickoff in Manchester. And it only continues into Saturday and Sunday nights.

Sports everywhere – just like here in the US – are a big part of people’s lifestyles. And now more than ever, and hugely throughout Asia, experiences are digital, resulting in a high level of brand penetration. Digital and mobile literacy advancements are in areas like commerce, videos on demand on smartphones, player and stat tracking. This is happening everywhere and allowing brands to be accessed with even more frequency and passion from anywhere on the globe.

We recently held our first ALSD International Conference in London, touring venues like Craven Cottage, home to Fulham FC. We’ve learned about the remarkable fandom in Europe, how it starts young and can strengthen or even divide communities and families. Here in the States, we have “our teams” of course, but is the passion for sports in other international markets different, stronger even?

It is hard to say. But picking up on your Fulham example, understand in the UK, there are 90 professional teams just in England. And that is a land mass about the size of the Carolinas. Can you imagine if there were 90 teams here?

“In the UK, there are 90 professional teams just in England. And that is a land mass about the size of the Carolinas. Can you imagine if there were 90 teams here?”

It’s tribal in the level of passion because that sport is so high, so relevant. All of these teams are very healthy, very profitable. Here, the biggest similarity would be college sports. Here in the Carolinas, we have the Blue Devils, the Tar Heels, the Wolfpack. We have Wake Forest, Clemson, and the Gamecocks, and that is just naming a few.

There is a high level of passion in US sports and a high level in the UK, and even though sports are followed differently, and the dynamics can be different, the consistency is that people at a very young age establish an affinity, an identity, and a loyalty to their team, their club, and it becomes a big part of their lifestyle.

Going back to your new ownership, tell us how David Tepper’s vision is helping to shape your own with the Panthers.

We are just getting started here. If you look at the things that David Tepper talked about in his first press conference up to today, we know there is certainly a focus and a commitment to winning and winning consistently. When you are involved in sports as an owner or as an operator, winning starts by putting the right people and the processes in place.

That mentality goes into things like facilities. We have been public and active regarding our interest to have a new practice facility. For our players, coaches, and executives to have success, they need a work environment to do so.

Community is also a hallmark for the Carolina Panthers. We will continue to exceed our commitment to our great fans, and we are investing more in our fan experience, helping them to live and showcase their passion, bringing fans together from across cities and our two states in the stadium and beyond.

During a five-year period between 2014 and 2018, $175 million was spent on major enhancements to Bank of America Stadium. 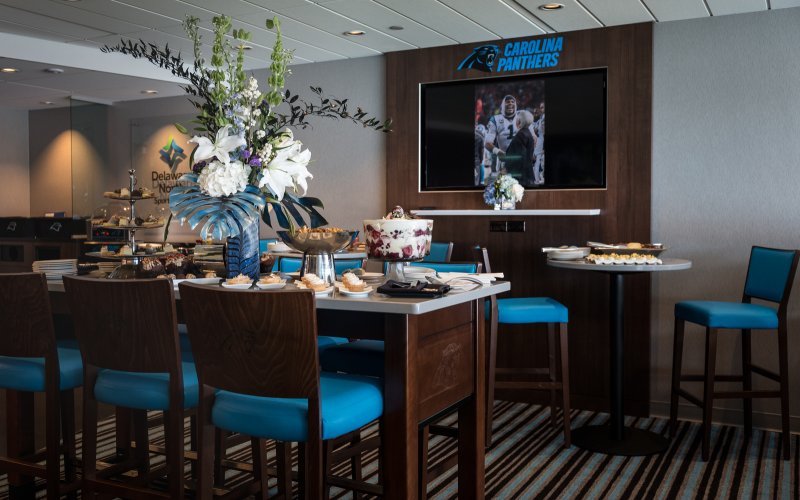 Renovated in 2015, the luxury suites at Bank of America Stadium feature upscale and modern furnishings in addition to well-appointed foodservice areas.

Of course, we will dive deeper into this at the conference, but at this point, what advice can you offer our audience of premium and venue professionals? How might we inspire the tenured and the new generations?

The more time I spend in this industry, the more excited I am about its future. It is a growing industry, and as I said before, this is a huge part of people’s lifestyles, and it is a huge part of what people are interested in and want to spend their time on.

“To anyone working in the business who may be feeling exhausted or doesn’t know what to do next… if you want to do something new or fresh, it is out there for you.”

You need to look no further than the NFL ratings right now. The games have been great, the ratings are up, the top-20 programs in the fall on television are all NFL programs. In addition to TV, you’ve got millions following on their smartphones and in bars and other outlets. This is one of the great things about live sport – there are more and new ways that people are following. Even if they aren’t watching the full game, they are keeping track of what’s going on, watching replays and highlights, tracking stats.

The fundamental interest and further investment in sports means that there are more smart people coming in to make being a fan that much better and that much easier.

The opportunities will continue to grow. To anyone working in the business who may be feeling exhausted or doesn’t know what to do next, I would just say take a deep breath and look around. Take a look at all the growth and opportunities and feel confident that if you want to do something new or fresh, it is out there for you.

The other thing I will say is that there is a lot to be said for hard work and common sense. These two things are really important. Treating people well is imperative, as is having a real hunger to look at what is new and what is next, which allows your team product to remain fresh and innovative.

Finally, my experiences have illustrated the importance of blending what has always been true and authentic to your team and its fans with what is coming next. We have to ask what of today’s lifestyles can we include in our venues and our marketing to stay fresh and modern, while staying true to the brand and everything that has gotten you to where you are today.

REGISTER TODAY and come meet Tom and hear him speak at the 2019 ALSD Conference and Tradeshow.