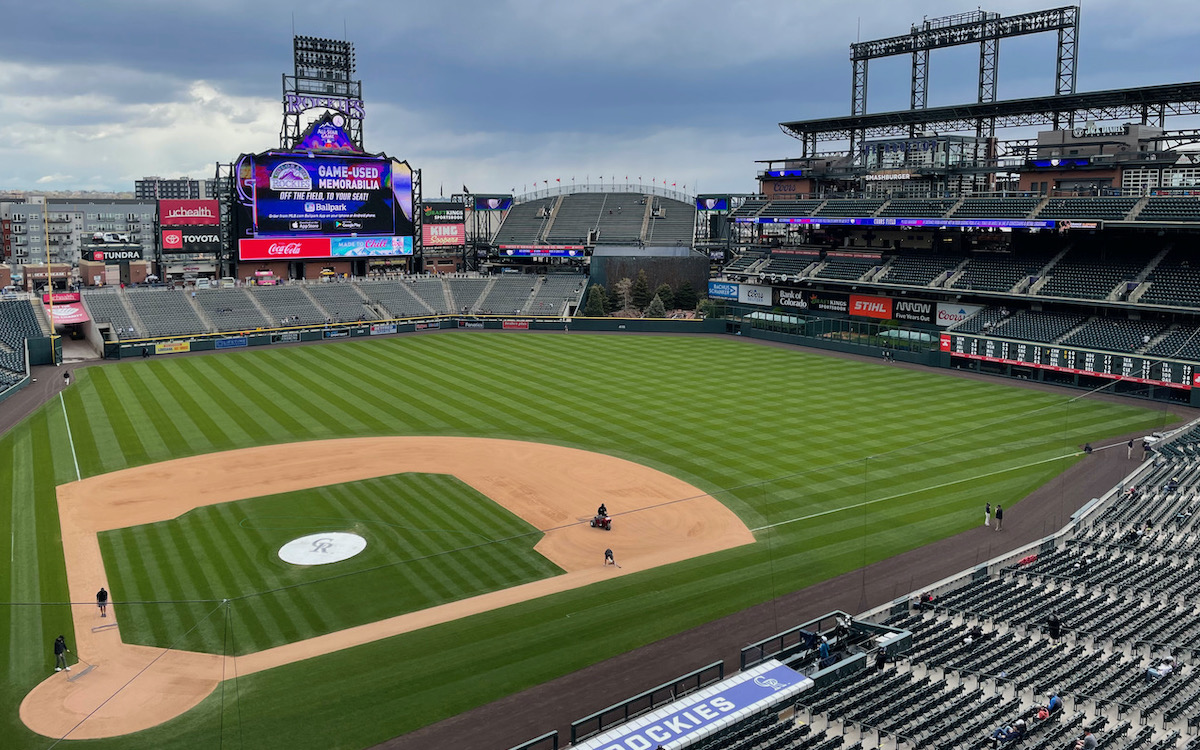 When Major League Baseball moved this year's All-Star Game from Atlanta to Denver, it no doubt set off a lot of organizational scrambling in order to get Coors Field ready to host the sport's mid-summer celebration.

Even with a full house of fans expected in July, one thing that didn't cause any last-minute chaos was the upgrading of the stadium's Wi-Fi network, which had already been undergoing a full renovation with added capacity and support for the new Wi-Fi 6 standard. With finishing touches being put in place at the time of a Stadium Tech Report visit to Coors Field in early May, the new Wi-Fi network should be able to more than handle the connectivity needs of the expected 50,000-plus guests at one of the first 100-percent capacity "big events" since the COVID-19 pandemic hit last year.

Unlike the need driving some upgrades or network refreshes, the Wi-Fi situation at Coors Field wasn't exactly underperforming. Four years ago, a visit by Stadium Tech Report found that the network that was initially deployed for the start of the 2015 season was doing fine, with strong performance marks all around the "old" venue, which opened in 1995.

Coors Field was one of the first stadiums that took part in the first iteration of Major League Baseball's 2014-era "tech consortium" – where the league partnered with teams, equipment vendors, and wireless service providers to bring negotiated-cost Wi-Fi and DAS deployments to every stadium that didn’t have them, a plan that eventually touched 23 of the MLB parks.

But even if the early networks were still working, with a new Wi-Fi standard available, it seemed like a good time to upgrade the old systems since for just about every public Wi-Fi or cellular network, demands continue to only go up with each passing year. For 2020, MLB had hatched a new consortium-type plan to bring the new Wi-Fi 6 standard to stadiums before the start of the season, and Coors Field was slated to be one of the first to get an upgrade.

Then the COVID-19 pandemic hit, and with fans not coming to stadiums, deployment plans were delayed.

Fast-forward to 2021, and another curve ball arrived, in the form of a February deal struck between MLB and Extreme Networks, under which Extreme would become the league's “official Wi-Fi solutions provider,” with 16 teams signing on to get Extreme gear installed. Coors Field, however, had a slight issue in that it had already purchased Wi-Fi 6 gear for its planned upgrade, from previous consortium supplier Cisco.

While the Colorado Rockies remain committed to the MLB consortium plan, with the league's blessing, the team moved ahead with its already-underway deployment of Cisco gear, with design and installation done by AmpThink. The new network at Coors Field also includes some Extreme Networks Wi-Fi 6 gear, located in bullpens and dugouts as part of an extension to the MLB/Extreme Wi-Fi deal.

Even if the existing Wi-Fi network was working well, the Rockies knew it was time to increase the capacity and reach of the system, especially in the area just outside the stadium walls.

"In the past, we really didn't want a Wi-Fi signal outside the stadium, and we even configured it so that there was a 'waterfall' drop off once you got a few steps away," said Mike Bush, senior director of information systems for the Rockies. "But now, we want fans to have access outside."

To that end, the deployment team of the Rockies, MLB, Cisco, and AmpThink added a number of new antenna placements all around the signature red-brick outside facade, and significantly increased the Wi-Fi coverage at the newly refurbished entry gates where the Rockies built awning coverages for the security lanes – which became a perfect mounting place for overhead Wi-Fi antennas.

The team also extended network coverage down the walkway outside Gate E on the stadium's south side, to the new McGregor Square area where fans are expected to gather before, during, and after events. During our visit, our Wi-Fi connection switched automatically from the Verizon-customer SSID to a Rockies-specific SSID when we walked from the stadium to McGregor Square. Inside the outdoor plaza area, where a huge curved LED screen was showing live game action, we got a speed test of 44.6 Mbps on the download and 62.1 Mbps on the upload.

"From an end user perspective, we want it to be seamless, where you just jump on the network once and stay connected," Bush said. Bush added that the network now also reaches out to the Coors Field parking lots, with some spaces a half-mile away from the stadium.

Like just about all other sports events these days, MLB games are now using all-digital ticketing, which makes the increased coverage at entry gates especially important. Bush noted that in the past, fans in groups were able to enter with all tickets being scanned off one device, but now safety and security procedures require that every fan has a single digital ticket – which means more devices need to connect to a network for entry.

As fans were entering the stadium, we stopped by the main gate inside lobby, where a few new AP placements no doubt helped with the speed test we got, with 108 Mbps for download and 91 Mbps for upload.

Doubling Down on the Lower Bowl

When the original Wi-Fi network was installed at Coors Field, new design techniques like railing antenna enclosures and under-seat locations were not yet mature, so the Rockies went with the more traditional overhead and back-to-front or front-to-back deployment methods to cover most of the seating area.

For the upgrade, the ballpark architects wanted to stick to that method, which meant that the Rockies, AmpThink, and Cisco had to get creative in expanding the number of APs and antennas. One feature that was utilized frequently was the fact that the newer Cisco APs can support two 5 GHz antennas per unit, which allowed AmpThink to double down in many areas, installing two antennas where there used to be just one.

Other capacity-increasing tweaks included moving some antenna locations from the farthest points back of the overhangs to spots closer to the end, giving the antennas better reach into the harder-to-cover seats in the middles of sections.

"We put a lot of effort into finding ways to increase capacity while still using existing cable," said Eric Miller, AmpThink senior project manager, who is responsible for overseeing the Coors Field upgrades. In all, Coors Field increased its antenna count from 570 to 805, using 720 APs, with 85 of those being the dual-antenna version. Previously the stadium had 570 APs.

AmpThink also installed newer versions of the so-called "coffin" box enclosures for locations like the ones on the field wall pointing back up into the stands, which are thinner and easier to maintain with easier access and more easily replaceable electronics.

"The new installations reflect years and years of us perfecting our enclosures," said AmpThink's Miller, who noted that while in the past AmpThink bought the enclosure hardware it now designs and manufactures its own patented offerings, which are specifically built to withstand things like stadium power-washing.

The upgrade plan also sought to solve some previous connectivity problem areas, like several sections of ADA seating on the upper deck that weren't easily covered by antennas from below or above. The solution this time was found in a bit of unused space behind the restrooms on the upper-level concourse. By putting AP electronics inside the space and then drilling a hole through the concrete wall to put antennas outside, the team was able to deploy flat-panel antennas right behind the ADA seating, which should more than solve any previous issues.

Expanded capacity also took place on the network's back end, where 55 new Cisco 9300 edge switches were deployed along with new Cisco 9500 series core routers, to help enable a backbone bandwidth upgrade from 1 Gbps to 10 Gbps.

More Connectivity for the Rooftop, for When Fans Come Back

At the time of our visit, local regulations would only allow the Rockies to admit fans up to 40-percent capacity of the 50,000-seat park, but that limit was recently raised to full capacity. That means there will be no limitations on attendance when the All-Star Game festivities arrive next week, when sellout crowds are expected for both the game itself as well as for the Home Run derby the day before.

At the time of our interview, Bush was looking forward to the re-opening of the stadium's popular "Rooftop" area, a segment of the upper right-field deck where seats were removed and stroll-around areas were built around a food and bar complex. According to Bush, more Wi-Fi capacity was added in the Rooftop area as well, since statistically it has proven to have the highest data use rates of any section of the stadium.

And those data rates should only go up, as fans return and find not just more raw capacity but also the potential increases in speed and efficiency promised by the Wi-Fi 6 standard, which is now included in most popular devices, including Apple's iPhone 11 and iPhone 12 series.

"When you look to the future and think about things like sports betting, connectivity is only going to keep being more and more important to the fan experience," Bush said. "We want to have the capacity needed to support all that, to allow people to have a great experience and then be able to share it instantly."