Braves fans can expect enhanced speed of service and food quality at experiential F&B destinations that pay homage to the flavors of southern hospitality.
By Jared Frank, ALSD 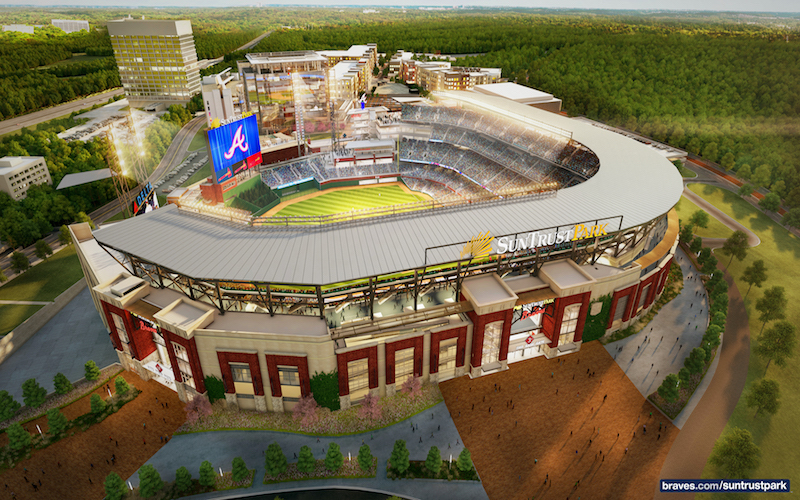 Nothing tastes quite like the south than sweet tea. Except that at Turner Field, fans couldn’t quench their thirst on a hot summer’s day with the holy sugar water.

“That’s one thing that we as an organization always felt like we were missing with our food,” says Dennette Thornton, Senior Manager of Group and Hospitality Sales, at the Atlanta Braves. “We didn’t have that signature look that other teams have… You couldn’t come to Turner Field and get sweet tea.”

Well get ready for sweet tea and a whole lot more at SunTrust Park. Delaware North Sportservice, who became the Braves’ foodservice partner last season after the team parted ways with its previous partner of 50 years, is bringing regional menu concepts and restaurant partners to all concourse levels that speak to the south.

“There’s going to be a southern flair to everything that we have,” Thornton says.

Leading the Sportservice team at SunTrust Park is District Manager Shawn Mattox, who is focused on the key areas of the foodservice experience, namely pricing, speed of service, variety, and quality of cuisine.

“There’s going to be a southern flair to everything that we have.”

Despite moving into a new facility, the Braves are keeping their food prices in the middle of the pack for Major League Baseball. The club has a family-centric fan base, and as such, have included kids-friendly concession stands that are peanut-free areas and sensitive to family pricing.

“One of the things that was a priority to us was bottled water, just given the temperatures in which our summers can get,” Mattox says. “That was one of the things we were sensitive about making affordable.”

On the premium levels, most of the 4,000 premium seats come with an all-inclusive or value-loaded component built into the ticket price. The clubs are cashless environments, which aides service levels and provides fans with more sampling opportunities.

“In most of these clubs, there isn’t a transaction,” says Mattox. “So that right there helps speed of service.”

On the general concourses, the number of points-of-sale is significantly higher than at Turner Field. And additional points-of-sale coupled with less seats overall means less wait time in concession lines. Supplementing the increased points-of-sale is a robust portable carts program that increases throughput on the concourses. In-seat components and app-based ordering are also available in some areas of the ballpark.

Menus throughout the ballpark are chef-driven. In the SunTrust Club and Delta Sky360 Club, there is a guest chef station, which is essentially a mini kitchen that customers can go to and interact with local community chefs who will cook to order.

There will also be opportunities to prepare food in view of the guest on the general concourses. A good example is the potato chopper concession stand where piston cutters are fresh-cutting fries and blanching them in front of fans.

“There are a lot of things that in the past were prepped in a local kitchen that we’re doing now as part of the experience of purchasing food here at SunTrust Park,” says Mattox.

“There are a lot of things that in the past were prepped in a local kitchen that we’re doing now as part of the experience of purchasing food here at SunTrust Park.”

Local partners and restauranteurs include many Atlanta staples, such as Fox Bros. Bar-B-Q, Chick-fil-A, and Waffle House. The Braves and Delaware North have also partnered with Chef Hugh Acheson on a fast-casual restaurant featuring a gourmet sausage and hot dog concept.

Mattox is pushing his culinary team to focus on making ballpark items better, hotter, and fresher. To do so, Delaware North has come up with its Farm to Fan initiative. In this program, Mattox’s team is partnering with local farmers to purchase their homegrown produce and locally sourced products – everything from nuts to honey to tomatoes.

There isn’t a designated Farm to Fan menu or concession stand. The Delaware North team will simply incorporate those local ingredients in all areas of the park whenever they are in season. For example, when tomatoes are in season, they will be used to make the salsa. Or when onion crop is available, those onions will be served on the condiments cart.

“We really wanted to be a fabric of the community, have a tie to the farmers in our area, and also have the freshest possible ingredients,” says Mattox.

Consistent with recent trends, Delaware North is getting paid an undisclosed management fee at SunTrust Park.

“In spirit, it’s a true partnership,” says Mattox. “In that regard, we’re very in sync on customer service and customer experience. We see eye-to-eye on being innovative and trying to explore food and beverage opportunities that may not be traditionally explored under certain types of agreements. [The Braves] value how much the foodservice is part of the overall fan experience.”