Partnering with Levy Restaurants, AMB Sports & Entertainment has announced a one-of-a-kind food and beverage model through which concessions items will be sold at “street prices”. But will it work in other venues?
By Jared Frank, ALSD 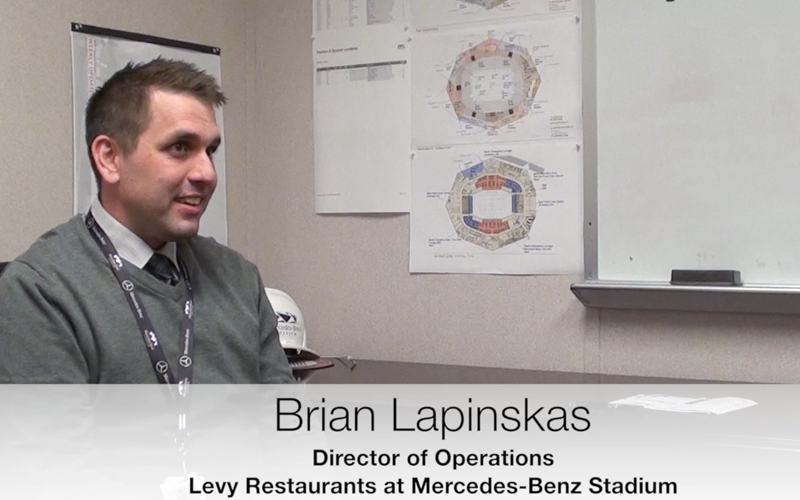 In Mercedes-Benz Stadium, a family of four will be well fed for less than $30. To address one of the lowest performing assets of most stadium experiences, the venue has announced its one-of-a-kind Fan First food and beverage menu and pricing model.

“That was the first thing [people asked] – what’s the trick? And there was no trick.” – Brian Lapinskas, Director of Operations, Levy Restaurants at Mercedes-Benz Stadium

“There’s no reason to have to pay $5 for a bottle of water. We all know it,” says Mike Gomes, SVP of Fan Experience at AMB Sports & Entertainment. “But if you’re thirsty, it’s your only option on gameday. When we announced our Fan First pricing, really a first-of-its-kind in the industry, we wanted to be fair. We wanted to charge you what you think you’d pay if you’re out on the street at a street vendor or going to a convenience store.”

Fan First pricing doesn’t stop with the concessions staples. There will also be no stadium markup across the offerings from local restaurant partners in the building. If a pulled pork sandwich from Atlanta favorite Fox Brothers is $7 in the restaurant, it’ll be $7 in the stadium.

Critics of the model question whether it will spread to other venues in the industry. Many stadiums and arenas will be watching Atlanta closely to see if volumes increase due to the lower prices, without lengthening wait time. To date, no other teams have adopted the model.

“We didn’t do it for [other teams]. We didn’t focus on game-changing this whole thing,” says Rich McKay, President of AMB Sports & Entertainment. “We did it because when you talk to the fan and you look at their biggest angst, it was food and beverage.”

To provide great food as quickly as possible, Mercedes-Benz Stadium is incorporating technology elements, such as mobile payment options and 65% more points of sale across all three levels. Simple edits have also been engineered, such as removing all soda towers from concessions counters and relocating them into the concourse corridors.

The deal struck with foodservice partner Levy Restaurants is much different from the traditional F&B rights deal. Levy will be paid an undisclosed management fee to collaborate on menu concepts and optimize foodservice operations. But Mercedes-Benz Stadium made the capital investment for all equipment and buildout of kitchen/pantry space.

“At the end of the day, [the deal] wasn’t as financially driven as you would think,” says Brian Lapinskas, Director of Operations for Levy Restaurants at Mercedes-Benz Stadium. “It was all about what can we bring to the fan. For the ownership group here and our executive committee, it really resonated with them to say ‘hey, maybe the model might be broken a little bit in sports and entertainment’, especially from a pricing perspective.”

The pricing piece has ignited a lot of questions from Lapinskas’ peers in the industry. Is he selling a smaller hot dog or a small soda?

“That was the first thing [people asked] – what’s the trick,” says Lapinskas. “And there was no trick.”

“[Fans] have a lot of things that they use to measure their fan experience,” concludes McKay. “But do you know what sits at the top every time? It’s food and beverage. And the biggest complaint? Food and beverage. We wanted to change it, so we did.”