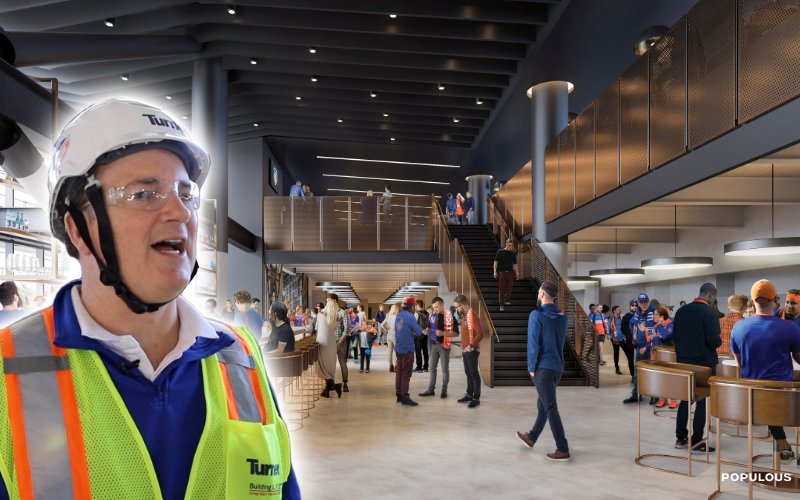 From its origins, FC Cincinnati has been a different kind of club. It had to be different, being born into a town steeped in sports history. Professional baseball began in the Queen City in 1869. Pro Football Hall of Fame member Paul Brown founded the Bengals more than 50 years ago. And two tradition-rich collegiate athletics programs, the University of Cincinnati and Xavier University, dominate local interest and bragging rights.

Now heading into what would be the club’s fifth season (second in MLS), FC Cincinnati continues to create its own style and way, parlaying the narrative throughout its new stadium with exceptional premium seating destinations under construction in Cincinnati’s West End adjacent to the historic Over-The-Rhine neighborhood deep in the urban core.

“We’ve tried to be very respectful of our values of being inclusive, being family-friendly, and ensuring that there’s a seat for everyone.”

“This is a project that is employing people, that is providing significant economic impact in this neighborhood and in the region,” says Jeff Berding, President of FC Cincinnati. “And it is a symbol of Cincinnati’s continued renaissance.”

FC Cincinnati is building the largest soccer-specific stadium in North America by numerous metrics, including its overall capacity for 26,000 fans, as well as its 53 suites and 4,500 club seats, quantities made even more valuable by the fact that on average, 92% of total revenues for a MLS club are gate-related. For comparison’s sake, the average MLS soccer-specific stadium features approximately 20 suites and 2,000 club seats.

“We will have the most significant premium inventory in all soccer-specific stadiums in North America,” says Jeff Smith, Senior Vice President of Ticket Sales and Service for FC Cincinnati. “It’s representative of the type of club that we are. We are aggressive. We are disruptive. And we want to go out there and create the ultimate fan experience in this marketplace. It’s all part of a very aggressive plan and vision from our ownership all the way down to our staff. We want to win. And to do that, simply stated, you need the resources. To have the necessary resources, premium seating is going to be the catalyst.”

The club has already secured $10,000 deposits for 35 suites and counting. And on May 7, FC Cincinnati launched the second phase of its sales campaign for West End Stadium – four fashionable and unique club destinations offering a range of amenities, experiences, and price points.

Located on the east sideline at field level, the nearly 17,000-square-foot First Financial Club represents the entry level club experience at the Populous-designed West End Stadium. FC Cincinnati is targeting first-time premium members for this club’s 2,117 seats, which are priced between $59 and $74 per match.

First Financial Club is a fresh take on the beer hall theme. It is supported by three large bars and two separate dining concepts, featuring made-to-order pizzas and a wide selection of draught beers curated by FC Cincinnati and its foodservice partner Levy.

First Financial Club features a beer hall concept and is priced on the low end of the premium spectrum, making it attractive for first-time premium buyers.
All images are courtesy of FC Cincinnati.

Across the pitch on the west sideline sits West End Stadium’s three remaining club concepts, beginning with the almost 11,000-square-foot Cincinnatus Club on the lower level. Its 1,134 members pay between $100 and $112 per match for a communal experience highlighted by upscale cuisine across two bars and three dining concepts.

The Cincinnatus Club’s thematic overlays pay homage to the city’s history and heritage.

With four clubs, including the Cincinnatus Club pictured here, and 4,500 club seats, FC Cincinnati has an aggressive plan to maximize match-day revenues and be competitive in MLS. As FCC’s Jeff Smith says, “To have the necessary resources (to win), premium seating is going to be the catalyst.”

Remaining on the west side but moving up to the concourse level, the next premium stop is the Pitch View Club, a more intimate setting with elevated amenities for 790 patrons. Its $188 per match ticket cost includes on-site parking and all food and beverages.

The Pitch View Club is the only club offering at West End Stadium with sightlines to the pitch from inside the club space. An attached outdoor veranda at the top of the midfield seating area promotes further mixing and mingling for club members while capturing and integrating the energy of the seating bowl.

Pitch View Club members are also afforded entry into the Cincinnatus Club, located directly below and accessed via an internal staircase.

The Cincinnatus Club connects to the Pitch View Club via an internal staircase, offering 790 patrons a more exclusive environment with unique sightlines.

West End Stadium’s most exclusive premium offering is located on the west sideline at field level, where 390 seats feed into the Tunnel Club. In this high-end space measuring 4,590 square feet, chef-driven menus and top-shelf alcohol fuel this highest-end hospitality experience.

Additional amenities unique to the Tunnel Club include pre-match viewing access to the players, referees, and official procession to the pitch, as well as FC Cincinnati press conferences post-match.

Tunnel Club pricing ranges from $442 to $589 per match, which includes parking and all food and beverages.

The Tunnel Club is West End Stadium’s most premier hospitality option, driven by upscale F&B offerings and exclusive viewing access to the players.

Fans interested in premium seating can book individual appointments to select their seats at the FCC Experience Center, a 5,000-square-foot space residing on the fifth floor of the club’s downtown office location.

The experience center brings to life West End Stadium, its storylines, and its unique opportunities through static and interactive elements, such as an oversized model displaying all of the stadium’s nuances and intricacies, as well as virtual environments and 360-degree views for all suites, club seats, and club interiors.

“We have the ability to have one-on-one conversations for storytelling, to answer questions, to hear about people’s priorities, and to help find the right home for them,” says Smith.

Due to current and evolving social distancing guidelines passed down from state and local governments and public health officials, FC Cincinnati is taking the necessary precautions with its use of the space and its scripts to ensure a safe experience for fans.

“We’ll have everything in place for you, including masks and gloves and sanitation,” says Smith. “We’ll have safe social distancing. It’ll be conducted in a way that puts safety first and foremost as a priority.”

FC Cincinnati will donate $25 of each ticket deposit to the COVID-19 Regional Relief Fund.

The COVID-19-necessitated shutdown of non-essential businesses forced FC Cincinnati to adjust its go-to-market strategy by delaying its phase-two premium sales launch by one month.

“We certainly want to be respectful of the times,” says Smith. “Over the past couple of months, we’ve run into a pause. But now we’re looking to reengage those conversations.”

While 2020 has ushered in plenty of uncertainty and concern, FC Cincinnati is well positioned to succeed in its sales efforts because of its ability to focus conversations with prospective clients on West End Stadium and the club’s optimistic future.

“We’re certainly disappointed that our 2020 season has been disrupted,” Berding says. “And we can’t wait to be playing games again. But what guides us and where our belief and hope is is in the future.”

The club is addressing the here and now with tactics aimed at providing relief for fans who may be experiencing hardship while rewarding the loyalty of all fans in the midst of unprecedented times. The club’s updated 2020 ticket policy includes a 10% Appreciation Credit. For any cancelled matches, matches played without fans, or any other reasons prohibiting fans from using their 2020 tickets, FC Cincinnati is automatically rolling over those payment amounts plus 10% to ticket buyers’ 2021 accounts. For example, if the club owes a ticket holder $1,000 for cancelled matches, that ticket holder will receive $1,100 on his or her 2021 account.

“That Appreciation Credit is just a thank you,” says Smith. “Thanks for being patient. Thanks for sticking with us. And hopefully you can find a way to apply it in West End Stadium.”

Jeff Berding describes the civic-minded nature of FC Cincinnati and its fans. “This is a project that is employing people, that is providing significant economic impact in this neighborhood and in the region. And it is a symbol of Cincinnati’s continued renaissance.”

In FC Cincinnati’s first four seasons, it competed at Nippert Stadium on the campus of the University of Cincinnati. The club sold out all its leased and single-match premium inventory over those four years, illustrating the demand from the regional business community for premium opportunities during FC Cincinnati matches.

“We have extraordinary interest,” Smith says. “We skew very heavy in the MLS data towards civic-minded fans, meaning fans, organizations, companies in this city love Cincinnati and want to support Cincinnati and its teams.”

When the $250 million, privately funded West End Stadium opens in spring 2021, it will provide nearly double the number of suites and quadruple the number of club seats for Cincinnati’s diverse fan base and corporate interests to engage and entertain guests on local and international stages.

“When it comes to premium seating, it was important for us to have a wide variety of these options with different destinations, stories, narratives, perks, and benefits associated with them,” says Smith. “We want you to feel like when you go from one club to the next that it’s a dramatically different experience.”

Bringing the World to Cincinnati

Additional signature design elements for all fans’ enjoyment inside and out of West End Stadium include a first-of-its-kind arrangement of approximately 400 metals fins on the building’s exterior. The venue’s most distinctive identifier will offer unique digital animation capabilities that support thrilling promotional engagements and remarkable approaches to the building.

Inside the venue, every seat will be situated underneath a 360-degree canopy roof, sufficient cover to protect all patrons from the elements while still allowing sunlight to sustain a natural grass field. At the stadium’s north end, The Bailey, the team’s supporters’ section, will occupy 3,100 safe-standing seats ascending from the pitch at a 34-degree angle.

“We think that the way we designed the stadium and the way that we’ve priced it provides something for everyone,” Berding says. “With The Bailey at $20 a game all the way up to our Tunnel Club seats and our Pitch View seats and all the seats in between, we’ve tried to be very respectful of our values of being inclusive, being family-friendly, and ensuring that there’s a seat for everyone who wants to come down and enjoy the FC Cincinnati experience.”

West End Stadium will meet all current requirements to host CONCACAF and FIFA events, targeting visits by the top national teams from around the globe, as well as the world’s best club teams for friendlies.

“It was important for me to create something for my city,” says Berding. “It promotes Cincinnati on the international stage. [Soccer] is the one sport with real global currency.”