The newest MLS stadium features many frictionless elements, such as mobile F&B ordering with in-seat delivery and new entry strategies, underpinned by Wi-Fi, DAS, and IPTV infrastructure to support these experiences, once luxuries, now expected by fans.
By Paul Kapustka, Stadium Tech Report 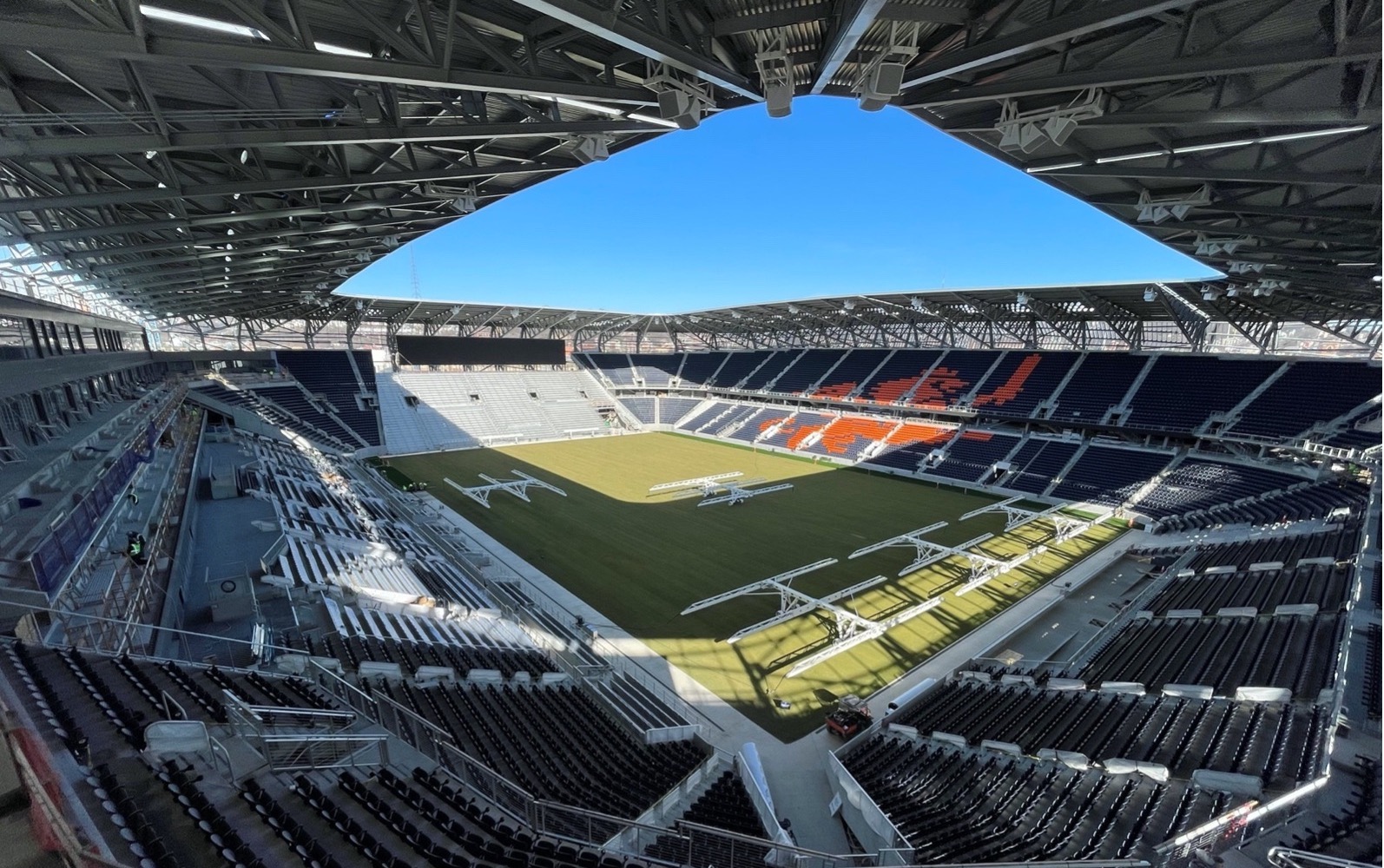 When TQL Stadium opens its gates for the first time this season, there will be a lot of technology working behind the scenes to make sure the fans of FC Cincinnati have an enjoyable time at their brand-new home.

While there will be state-of-the-art wireless connectivity and the newest versions of entry, concessions, and ticketing applications in play in the new 26,000-seat venue, the team owners were not looking to install technology for technology’s sake. Instead, they said their tech mission was to solve problems and create a unique, frictionless environment that would make going to games safer, easier, and more enjoyable, thereby making TQL Stadium that new home fans will want to visit again and again.

Previously, FC Cincinnati had played its games at the University of Cincinnati’s Nippert Stadium, a 40,000-seat facility designed for American football. But when MLS opens its 2021 season, the “orange and blue” will have their own dedicated stadium, one that at first glance from the outside should add a sparkling highlight to the Cincinnati skyline with its unique vertical fins LED lighting system that produces moving light displays.

The stadium is scheduled to open with a game against Inter Miami CF on May 16, 2021. Formerly known as West End Stadium, the venue became TQL Stadium on April 21, 2021, with the naming sponsorship of Total Quality Logistics, a Cincinnati-based firm.

If the outside fins and the inside video boards from Daktronics are the most visible displays of stadium technology, there is a wide range of other technology deployments meant to make the actual in-person visit an easier and safer experience by eliminating friction points that have long been a part of gameday sports.

“We wanted to be innovative from a technology standpoint,” said Ryan, who joined FC Cincinnati last year after previous stints with the NBA’s Denver Nuggets and Atlanta Hawks. “But mainly, what technology does is allow us to solve problems.”

And a lot of those technology decisions, Ryan said, come from FC Cincinnati’s fans, who were surveyed about gameday visits prior to the construction of the new venue. 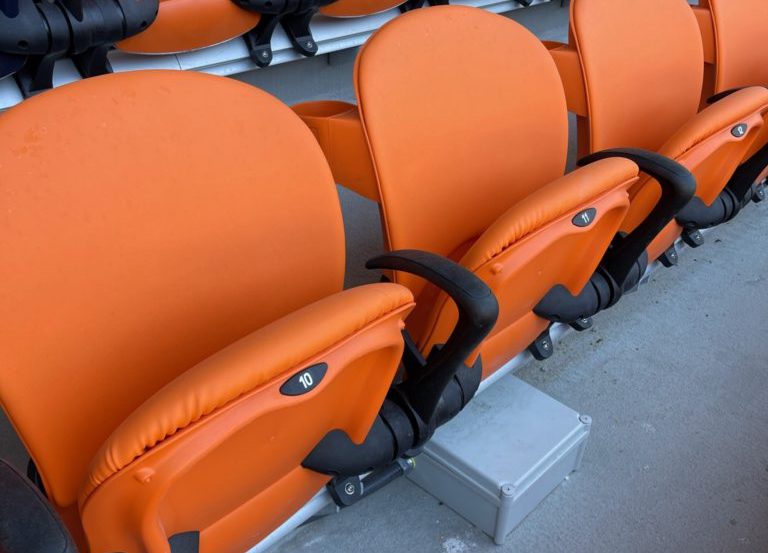 Being Safe at the Game

Even before the covid pandemic hit the world, the plans for TQL Stadium called for innovative use of technology in all phases of operations. According to Ryan, the team got a real inspiration of what its new home could be when the owners visited Allianz Field in St. Paul, Minnesota, during an MLS game against Minnesota United FC.

Looking around that new facility, which was also designed with an innovative technology strategy, gave FC Cincinnati ideas about what its new home could be. The team “experienced something that aligned with where we wanted to go,” Ryan said.

And while there, FC Cincinnati also found the firm it would use to help it get to its desired technology future – Atomic Data, the Minneapolis-based company that built and ran the networks and other technology at Allianz Field.

“When we opened Allianz Field, we wanted to have people taking tickets with handheld scanners, to greet fans by looking them in the eyes,” Mahadevan said. “But the pandemic has changed things. Now nobody wants to touch anything, so instead of hand scanners [at TQL Stadium] we’ll have pedestals.”

Mahadevan also said that Atomic Data helped design in extra wireless coverage for the new stadium’s main entry, where more than 60% of a gameday crowd is expected to enter.

The pandemic also provided a final push toward a fully cash-free and as contact-free as possible concessions operation. FC Cincinnati selected app provider Venuetize to help build a stadium app that will support more contact-free transactions, including an in-seat delivery option that Ryan said will be trialed early on.

“From the fans, one of the biggest [previous] complaints was about wanting to get back to their seats more quickly when buying concessions,” Ryan said. “They also wanted us to make sure the experience was truly safe.” 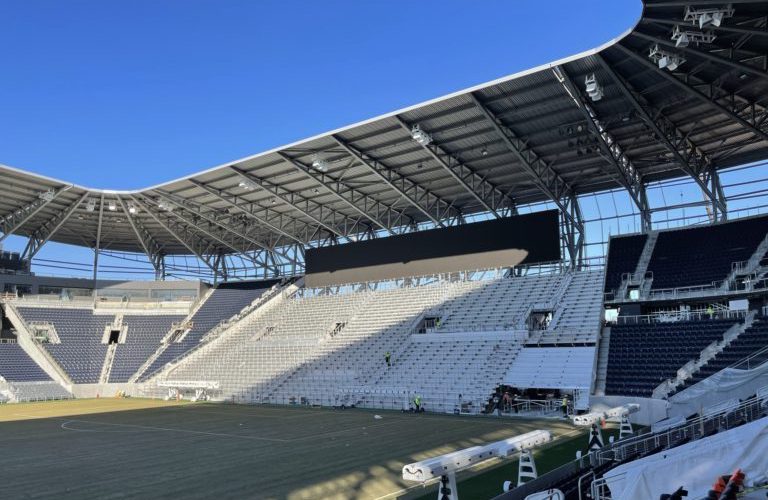 The 3,100-person safe-standing supporters’ section, dubbed “The Bailey”, at the north end of TQL Stadium.

“When something is working, adding a new partner [as integrator] is not always the best solution,” Ryan said. “Atomic Data really helped us make our ideas happen, and we started asking how we maximize the relationship.”

On the Wi-Fi side, Atomic Data is following its game plan from Allianz Field in Minnesota, where it installed a mix of under-seat AP placements in the bowl seating and overhead, as well as wall placements in other areas. Using gear from Aruba, a Hewlett Packard Enterprise company, Atomic Data said it used about 350 APs in the bowl out of a total of approximately 650 APs. All the devices support the new Wi-Fi 6 protocol.

For the cellular DAS, Mobilitie is leading the deployment, which according to Mobilitie will include approximately 200 antennas, including eight MatSing Lens antennas. On the IPTV side, FC Cincinnati picked Vitec to install the approximately 350 TV-size screens that will be used around the stadium.

And not all the technology is wireless or digital. According to FC Cincinnati, its new ultra-fan section – called “The Bailey” after a castle’s stronghold – will give its most ardent fans some neat perks, including counters with cupholders, so you can stand and cheer and not have to hold your beverage while doing so, as well as built-in overhead wire and pulley and lever systems to allow tifos to be safely held aloft over the fans’ heads.

“We really want this stadium to be a community connector, to be the crown jewel of the city,” said FC Cincinnati’s Ryan. “We want fans to have the desire to come back every day.”