Globe Life Field: The Best of All Sports Worlds 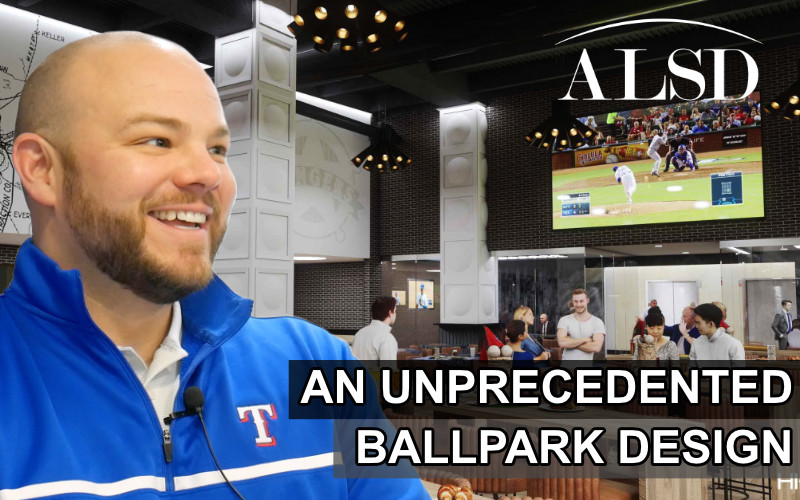 Amenities abound beyond the premium levels at Globe Life Field, starting with its 5.5-acre retractable roof built from 19,000 tons of steel.

“First and foremost, there’s comfort for everyone with climate control, but there’s also certainty of our product commencing at the same time,” says Joe Januszewski, EVP and Chief Revenue & Marketing Officer for the Texas Rangers. “We haven’t had that many rain outs in the nine years I’ve been here, but what we’ve had is weather-impacted games. So when the schedule says 7:05, short of an act of God, God forbid, we’re playing baseball at that time. That certainty is very important.”

Let There Be Light

Enclosed sports venues have a tendency to feel dark. The Rangers design team ensured adequate allowance for natural light to enter the building by incorporating high quantities of transparent and translucent materials. Consistent with what the industry has seen in recent NFL new builds, ETFE is deployed at Globe Life Field, permitting light to enter the ballpark and translate all the way down to the lower level concourses.

ETFE comprises the entirety of the fixed portion of the roof as well as its center sections directly over the playing surface. A significant amount of glass on the building’s north façade also affords daylight and connectivity between Globe Life Field and the adjacent Texas Live! entertainment district.

“What you’ll find compared to most baseball facilities, especially retractable-roof ones, is a lot more glazing, a lot more glass,” says Sean Decker, EVP of Sports & Entertainment for the Rangers. “That gives the opportunity for light to come in. And the ETFE product, to my knowledge, hasn’t been used in baseball yet, so we’re really excited to introduce that here. We kind of joked about this, but the one thing you’ll find in common with most Texans is they all want to be outside. They’re just tired of sweating in the summer months.”

To service guests not seated in premium areas, the design team programmed multiple destinations and premium concessions accessible to non-premium fans, starting with The District, which treats the two-thirds of seat holders in the lower bowl not mapped to a club space.

“For lack of a better term, it’s a very high-end concourse,” says Januszewski. “It’s something that people have not seen in a baseball venue.”

As one traverses up the building, both the main and upper concourses have been reengineered to optimize fan experience. Architects flipped the positioning of the concession stands so that now when fans leave their seats in the midst of the game, they don’t enter a vomitory and exit onto a concourse where concession stands are built into cinderblock blocking their views of the field. At Globe Life Field, concessions are repositioned in the back of the concourse, opening up 360-degree views and never disconnecting fans from the action.

The Karbach Brewing Sky Porch in the upper level in left field features a unique variety of barbeque paired with craft beers. It’s the Rangers’ interpretation of the social destinations now commonly found in sports venues that are aimed at younger demographics.

“I call it the best rooftop bar in Dallas-Fort Worth,” Januszewski says. “The ballgame may not be the principal reason they’re here, and that’s okay. We hope to build that fandom obviously, but we have to get them out here first.”

There’s clearly something interesting around every corner inside, and outside, Globe Life Field. Texas Live!, 150,000 square feet of six restaurants, 27 different bars, entertainment space, and a brewery, is a partnership with The Cordish Companies, known for their successful developments anchored by sports venues in other markets, such as Philadelphia and St. Louis.

“We’ve always liked to think of the ballpark as the backyard of Texas,” Decker says. “We believe that Texas Live! is the living room of Texas. We’re giving folks a reason to come early, stay late, and also come when there isn’t a baseball game going on.”

In the heart of Texas Live! is the Live! by Loews hotel, the first four-star hotel in Arlington. At the end of 2019, the Rangers announced plans to more than double down with a second 888-room hotel and convention space.

Globe Life Field is a venue for all events and all people, boasting an impressive selection of premium seats, as well as individual tickets as low as $9, kids’ tickets as low as $6, and 81-game season ticket packages as low as $15 a game. Its back-of-house operations lean heavy on a baseball stadium-unique, below-grade loading dock and a service tunnel that encircles the building unbroken for 360 degrees. And with three entrances to the field for production, load in, and load out, Globe Life Field generates ultimate flexibility for hosting a variety of events that generate the ultimate fan experiences.

“Operationally, we’ve tried to make it the easiest place in the world to come host your events,” says Decker. “Then from a fan experience perspective, with everything we’ve done, we hope that what the takeaway is is something that’s never been imagined. We took a stadium, an arena, and a ballpark, and it came together to create this really unique fan experience that’s unprecedented.”