In response to the ongoing challenge of providing a venue experience that rivals fans’ in-home amenities, the Miami Dolphins are in the midst of comprehensive renovations that include living room suites and a roof installation.
By Dave Wakeman 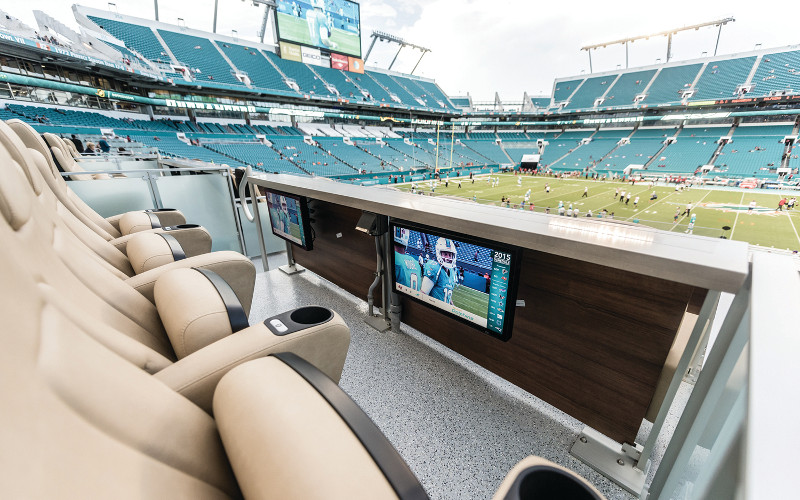 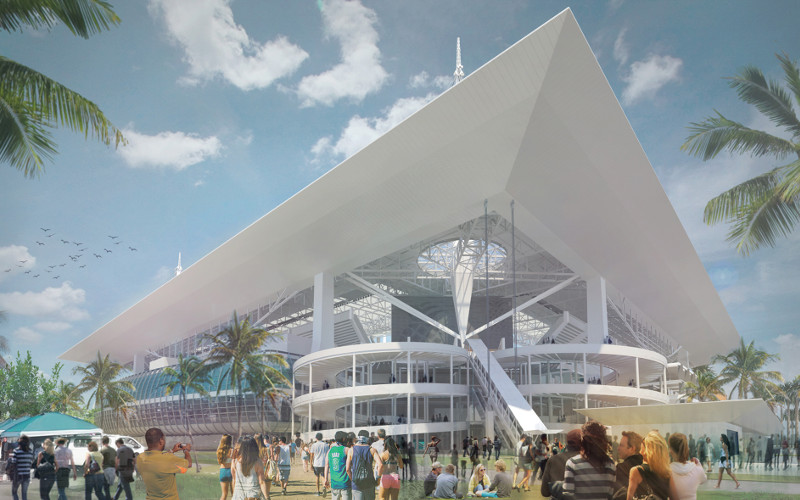 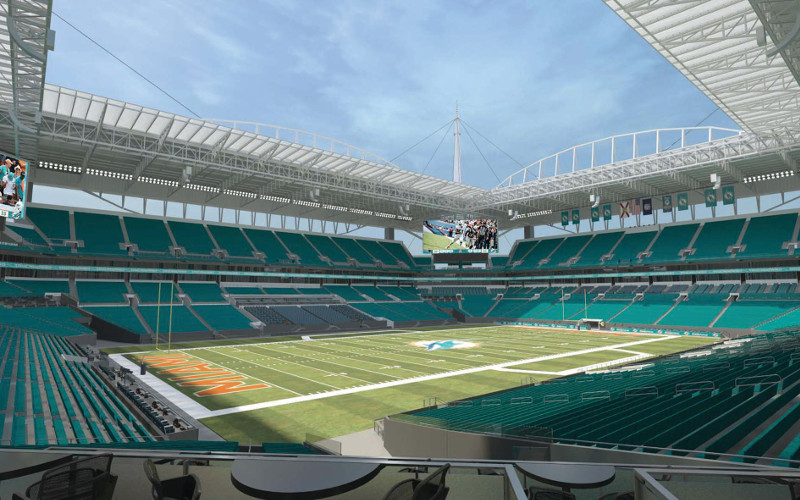 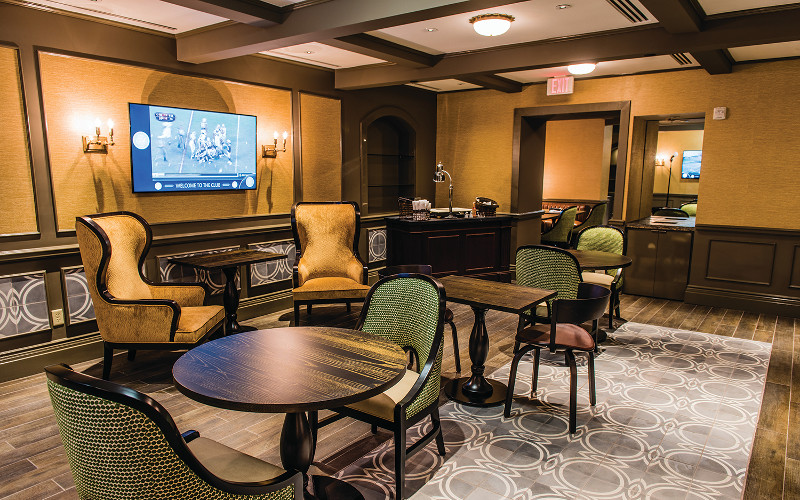 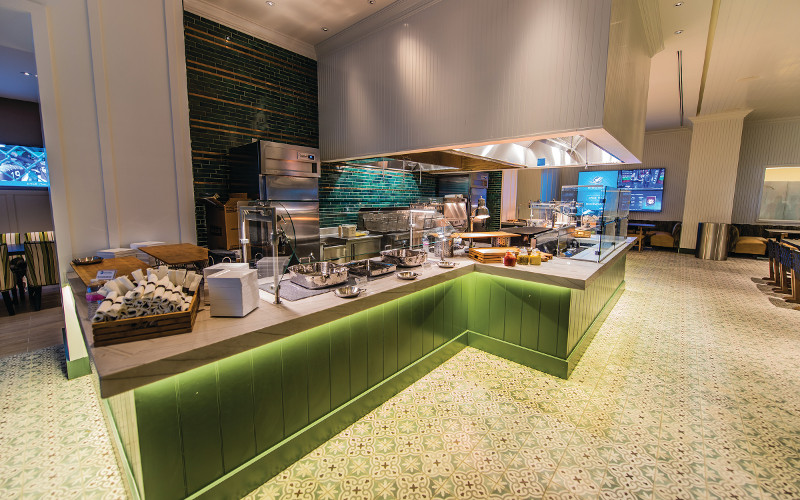 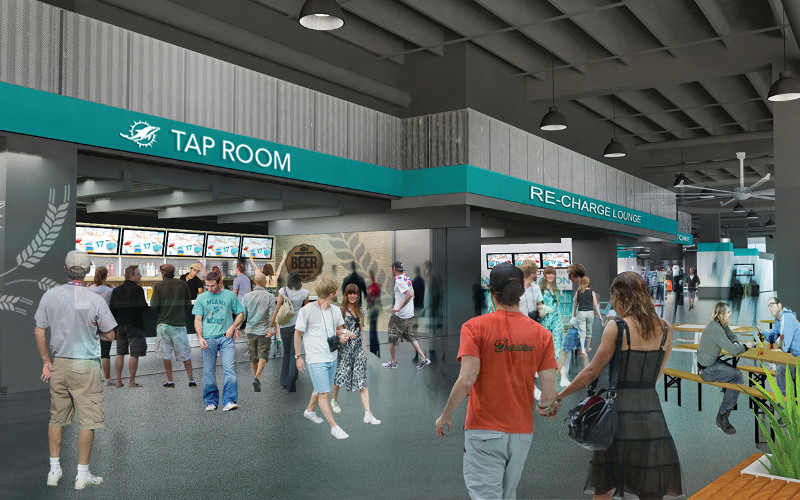 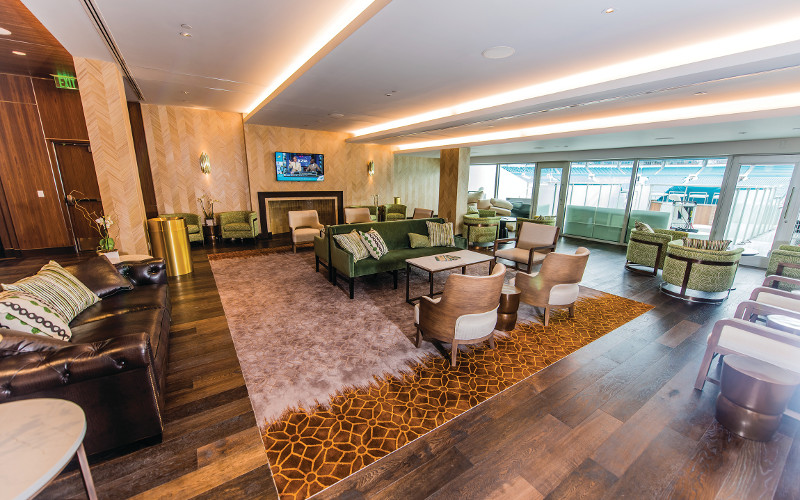 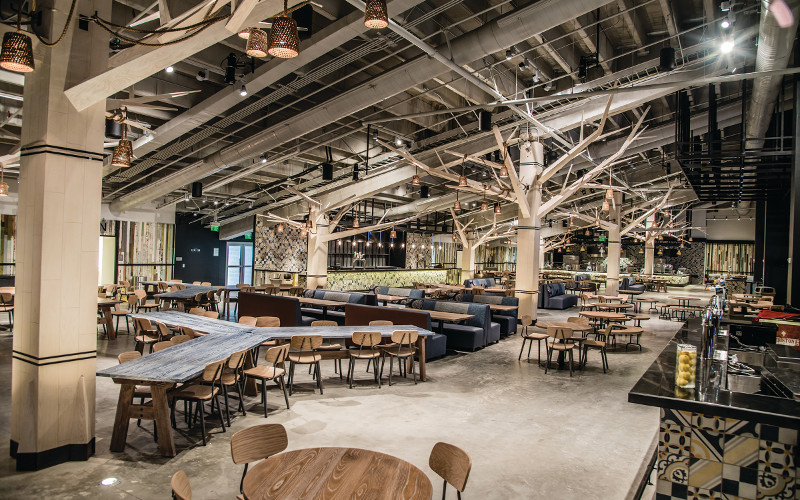 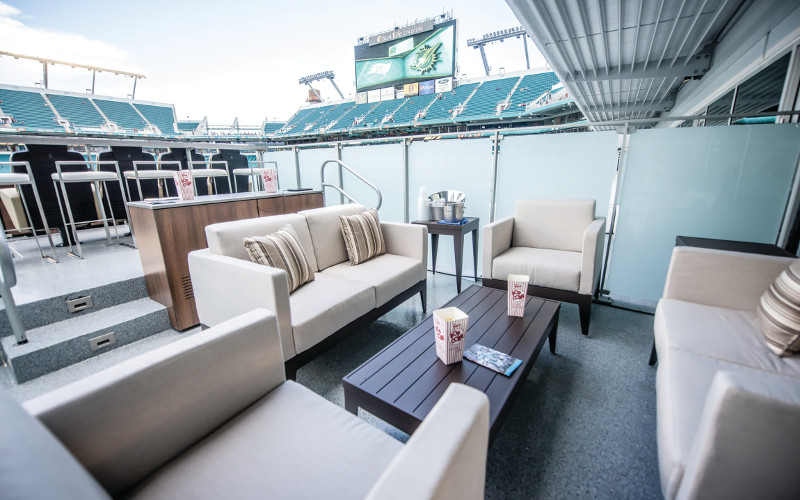 Editor's Note: The following article first appeared in the 2016 winter issue of SEAT Magazine. ALSD 2017 attendees will have the opportunity to tour the completed renovations at Hard Rock Stadium on Monday, July 10th.

Teams throughout the NFL are confronted with the task of providing a stadium experience that can compete with the one that many fans can produce in their own homes with large-screen TVs and cable packages that give them access to multiple games at once.

It is this dynamic, and its unlikely cessation, that makes the multi-year project of reconstructing the home of the Dolphins in Miami a fascinating example for other teams as they search for ways to fully engage their fans and keep them coming out to experience games in person.
“In taking on this project, we wanted to do everything in our power to elevate the Miami Dolphins brand,” says Jeremy Walls, Senior Vice President and Chief Marketing Officer of the Dolphins. “We have worked really hard at providing a much more personal and intimate experience for all of our fans and ticket buyers.”

The Dolphins have used this opportunity as a way to incorporate the unique aspects of living and being in South Florida into the club and suite experience, using its advantages to offer experiences that are unlike anything found at any other stadium in the NFL.

The team has introduced five new club and suite experiences for its fans – The Nine, The 72 Club, the Ford Field Club, the Atos Club presented by EMC, and the North Sideline Club.

On the 100 level, the Dolphins have added The Nine, possibly the most unique suite experience in the NFL. Dubbed “the most exclusive club in South Florida” by the Dolphins, The Nine comprises the nine most expensive suites in the stadium.

Each of these suites is open-air and sits between the 30-yardlines, directly above The 72 Club. Besides including amenities that would be considered standard in a suite of this kind, the Dolphins have added several other benefits to ownership, including two Super Bowl tickets annually, a dedicated concierge, and along with members of The 72 Club, exclusive field access passes for pregame mingling on the field.

“The Nine suites really allow us to take advantage of being in South Florida and the South Florida weather,” says Nick Forro, Vice President of Ticket Sales and Service. “These fans have an open-air experience that is covered and protected from the elements, and they have access to a club. 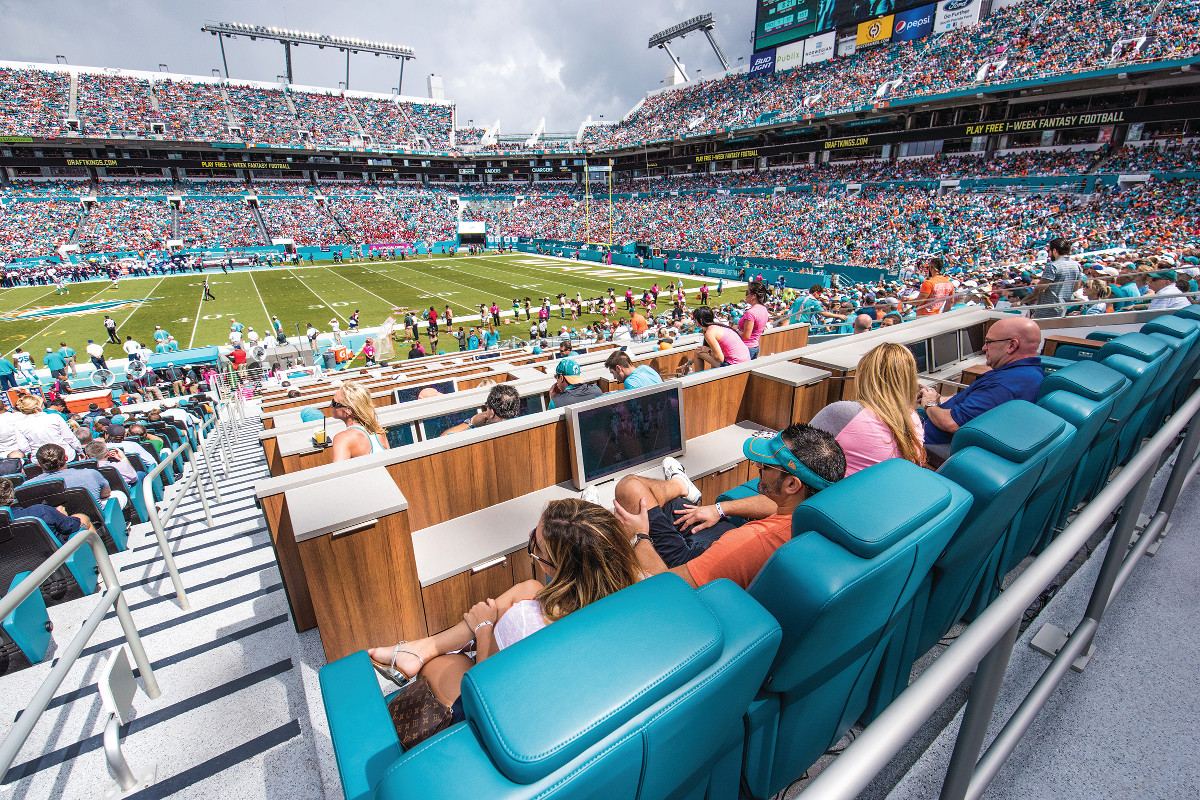 "We feel like we have tried to provide a luxury experience at every level and for every fan who decides to come see a Dolphins game." – Jeremy Walls, Miami Dolphins

“One of the great things we have discovered is that in the case of The Nine, our efforts to really create this unique community environment with our fans has really taken off. Several of our suite owners have shared their experiences building friendships and relationships with other suite owners.”

The benefits of this tight community of suite owners extends to the relationships outside of Sun Life Stadium as well, and includes “black car” pickup before each game and a trip to a Dolphins away game each year.

The 72 Club is another exclusive experience that allows each of its members to have some of the most premium benefits anywhere, including a fast lane with valet parking and a Rockwell Group-designed private club for networking and entertainment before, during, or after the game.

The 72 Club Living Room Boxes are the Dolphins’ way of bringing the living room experience to fans inside the stadium. These four-seat boxes include fantastic home-theater-quality amenities, such as private 60-inch screens to watch replays or live feeds of games, prime sightlines at the 35-yardline, and the most comfortable seats in the stadium.

Capitalizing on the limited number of seats and the unique perspective one gets from being in the end zone, the Ford Field Club and the Atos Club presented by EMC are a collection of 14 four-person suites located in either end zone. Meanwhile, the North Sideline Club offers fans a premium seating experience between the 30-yardlines that includes another Rockwell Group-designed club created specifically for these fans to entertain, mingle, and network.

The Next Phase of Renovations

As a new canopy roof begins to take shape ahead of next season and as the completed vision for a new Sun Life Stadium becomes a reality, several other important aspects of the stadium’s rebirth will provide opportunities for fans in other areas around the stadium.

Going forward, the team has plans to build another unique 200-level club that has the ability to generate a close-knit community in each corner of the stadium. Fans on the 300 level will have open-air concourses at the corners, situated under the four new HD video boards that the team is installing. These concourses will provide fans with new food and beverage options and a one-of-its-kind sightline for the game.

“At every step of this process, we have tried to take [Dolphins owner] Stephen Ross’ vision of creating a global entertainment experience and make it a reality,” Walls says. “We feel like we have tried to provide a luxury experience at every level and for every fan who decides to come see a Dolphins game.”

In redesigning its stadium, the Dolphins have taken great care to consider ways that they can elevate the fan experience at every point of contact, from the initial purchase all the way through the offseason, a desire that Dolphins fans expressed directly to the team through multiple surveys and conversations with stakeholders.

“We are fortunate that our fans are extremely dedicated to supporting the team,” Forro says. “And one of the key things that they expressed to us is a desire to have a much larger connection to the team. This led to a number of ways that we have incorporated year-round membership experiences into our dealings with our fans.”

One of the most important aspects of how this relationship plays out is with the Dolphins Business Alliance. This program was specifically designed to take advantage of Miami’s position as a hub of international business and a gateway to Central and South America. The Business Alliance has six major events each year that are designed for Dolphins ticket members and business leaders to entertain and do business with other ticket members and their targets.

A Renovation for All Fans

The Dolphins renovation of Sun Life Stadium isn’t just focused on the premium areas, but will impact the experience of each fan no matter where they sit. The most noticeable change is the configuration of the seating bowl and its relationship to the playing field. In rebuilding the stadium, the seating capacity has gone from just over 75,000 when originally built to just over 65,000 with the new configuration.

In recreating the fan seating experience, several things have changed that will impact the experience in the stands.

Every seat in the stadium has been replaced, with the majority being replaced with the 408 series from American Seating, an ergonomically correct seat that provides better cushioning and wider seating space than before. In addition, the new configuration of the seats gives each fan additional room to make it up and down the seating row with less disruption to seated fans. 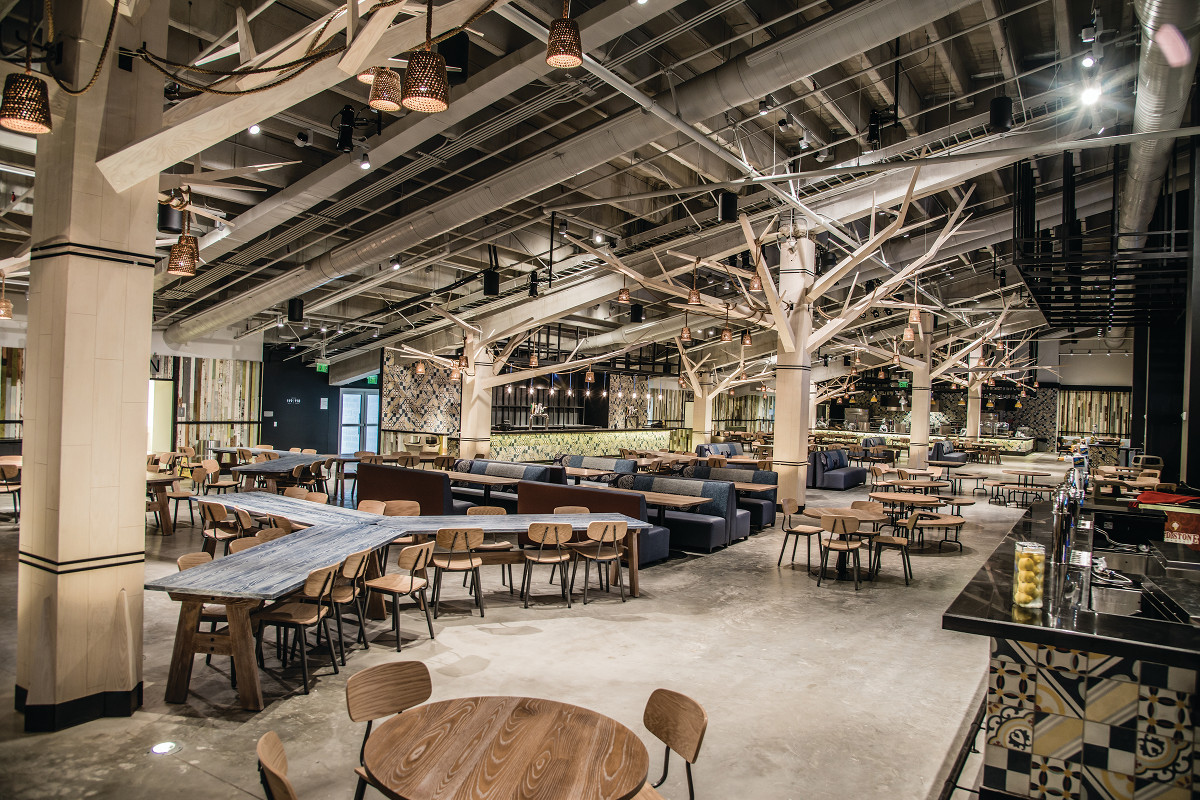 Located below wider, padded seats between the 30-yardlines is the air-conditioned North Sideline Club.

As the seats have been replaced, each seat in the stadium has been repositioned so that everyone is closer to the action on the field. It is a huge experiential improvement, as fans are now 25 feet closer to the sidelines than they were previously, giving fans a feeling much more similar to the Orange Bowl, where the team played before moving to Joe Robbie Stadium (now Sun Life Stadium) in 1987.

While the South Florida weather has always been largely an advantage for the team, some aspects of it do not cooperate with the team’s best interests. In building a one-of-its-kind canopy that will provide shade and cover for over 91% of fans, the Dolphins are betting on two things: that protecting fans from the elements will encourage them to attend games, and that the canopy will act as a tool to capture and circulate the fan noise in a way that mimics the home-field advantage they enjoyed at the Orange Bowl.

For the modern fan, the game itself isn’t the only consideration when deciding whether or not to attend. For many fans, the food and beverage possibilities are key differentiators in their decisions. In this regard, the Dolphins have made sure that they are providing their fans with unique local flavors and experiences, and in many cases, going further to provide food and beverage options that they can get only at the stadium.

Throughout the stadium, each and every dining and beverage option has been reinvented in partnership with concession partner Centerplate. In almost every instance where there was the chance to make things local, Centerplate and the Dolphins took advantage of that opportunity. And the results have paid off.

“Fans have responded better than we could have expected,” says Walls. “After the first year of providing these new dining options, our highest grossing concessions have been those that are local.”

The Dolphins’ Director of Concessions and Retail Management, Ben Metzger, adds, “We’re excited to continue serving fresh, local, and diverse options for our fans. The renovation brings a new stadium to fans, and we feel the food and beverage experience will directly complement that enhanced game-day experience.”

Some of the culinary highlights include local sports bar favorite Bru’s Room, growing burger chain BurgerFi, and world-famous Cuban restaurant Café Versailles, in addition to several other exclusives like the Tap Room, 305 Grille, and SOBE Fresh.
The food options are complemented by an incredible selection of beers from Florida’s thriving craft beer scene. Throughout the stadium, fans will find a curated list of craft beers that matches and surpasses any other in the NFL, including selections from the nationally recognized Cigar City Jai Alai IPA, several selections from rising local star Funky Buddha, and beers from neighboring Wynwood Brewing Company.

In the final stages of the renovation, the team will work to improve both the ingress and the egress to the stadium because stadium traffic has been an issue over the years for fans.

“As we complete this project, we want every aspect of the customer experience to evolve,” summarizes Walls. “And in our planning, no detail is too small because we understand how every touch point can have a tremendous impact on the fan experience. We just want to do our part to make that experience the best it possibly can be.”

How is your venue evolving its fan experience?
Write to Dave at dave@davewakeman.com