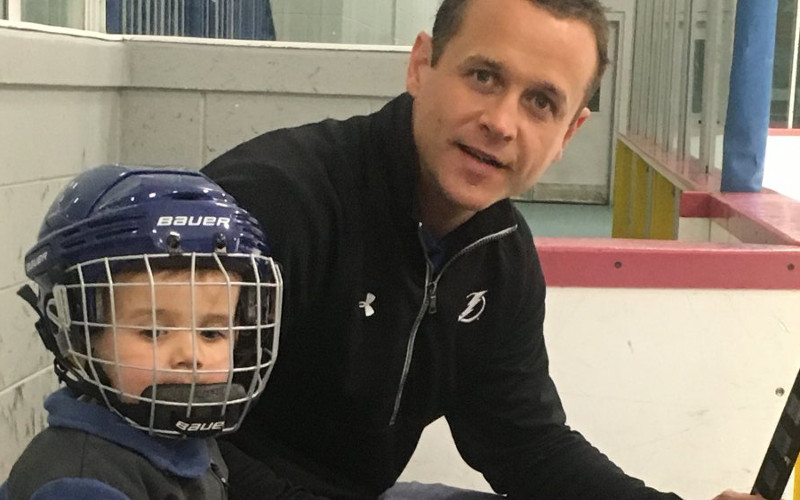 He’s a product of the Canadian hockey system. He’s a Dutch National Champion. He’s a hockey lifer with an enduring competitive spirit, softened only by his young son, Guinn. He’s a new ALSD Board of Advisors member. He’s Matt Hill, Senior Director of Suite Sales and Service for the Tampa Bay Lightning.

It’s a Tuesday afternoon, which means Matt Hill is fresh off of a scheduled workout, complete with flipping tires and pushing sleds, a tribute to his glory days as a professional hockey player. What started as a workout challenge from a client quickly turned into a department-wide routine.

“One of my clients has a gym in the back of his office space with 50 yards of turf and all of the new innovative training equipment,” Matt says. “I asked him if I could bring my team sometime, which quickly became something we do every Tuesday and Thursday. It’s great team building.”

A hockey player by birthright, Matt Hill has always been an athlete, with a competitive spirit that melted off the ice and onto the sales floor. And while limited now to recreational activity, he does still get to lace up his skates every now and then.

“Ask him what Steve Yzerman said about his skating.” That’s what Steve Griggs, CEO of the Tampa Bay Lightning, said when I probed him for the inside info on Matt. Turns out Mr. Yzerman, General Manager for the Lightning, thinks Matt Hill is a pretty good hockey player, but with one criticism. But more on that later.

In the fall 2015 issue of SEAT, as part of a brief profile to announce Matt as a new ALSD Board of Advisors member, the ALSD learned that Matt Hill’s most memorable sports moment as a hockey player was winning the Dutch National Championship in 2001 with the Amsterdam Boretti Tigers. It turns out there are a lot more memories for this hockey lifer.

I thought we’d start with your glory days as a hockey player before you became a hockey seller. Can you give us a rundown of your playing career?

I’m from the east coast of Canada, a little town called Bedford, which is outside Halifax. So I came through those ranks. Then I went on to play Midget AAA, which is sort of the feeder system to move along. I went from there to a Division III school in Vermont called Middlebury College, where I played for one season. It was an unbelievable experience, but it just wasn’t enough hockey for me.

I wanted to play more, so I went back up north to play junior hockey, then some Canadian university hockey at St. Mary’s University. Some of those guys that I played with [at St. Mary’s] are still my best friends today.

Post-university hockey, I played a year in the old WPHL, which became the Central Hockey League and has since morphed into the East Coast Hockey League. We used to joke that we were in the ultra minors. I knew I was never going to get to the NHL. It was just fun to ride the bus, see some cool towns, and play in some crazy rinks.

Do you have any crazy minor league stories that are appropriate to share?

When I lived in central Texas, we were on a ten-day road trip. We were coming back from Lubbock, and when we got back to the arena, the doors were locked. The team folded while we were on the way home. Classic minor league hockey.

After a dispersal draft, I ended up in Monroe, Louisiana and played for the Monroe Moccasins. I loved my time there.

The next season, I played in the Dutch League for the Amsterdam Boretti Tigers. That was an incredible experience and an opportunity to see the world. And we actually won the Dutch National League Championship that year.

At this point, Matt had a choice. Continue playing in the “ultra minors” or in his words, “grow up and get on with real life.” So he moved home to Canada to help run the family business – his father’s educational software company. But after two years, he decided to take a different path. “That just wasn’t my passion.”

One night while hanging out with Brad Richards, who was playing for the Lightning at that time, Matt shared with Richards his ambitions to get into the business side of the NHL. Two months later, Matt sold his house and moved to Tampa, Florida.

What surprised you in the beginning about the business side, coming from the hockey side?

As a player, you just assumed that someone turned on the light in the ticket office, everyone showed up, and the game was on. I had no idea the machine that was behind a professional sports team. I had no idea what selling tickets meant, but I jumped into the inside sales room, started making calls, and learned the business side.

I originally intended to come down here, start on the business side, and move over to the hockey side. But once I got into the revenue side of it, those competitive juices I had as a player started kicking in, and I started to love it.

Now that you’re a husband and a father, how has that changed your approach to those competitive juices?

Being a hockey player growing up, I was wired one way. I was a big believer in being the first guy at the rink and the last guy to go home. And I took that approach to the business world. I always wanted to be the first guy in the office, the last guy to leave in the evening. But now having this little guy completely changes every priority I’ve ever had in my life. Now he’s the priority. I don’t think [having kids] changes anything about your work ethic. It just changes the way you go about doing it.

Cool story there. His name is Guinn. A teammate of mine who I played junior hockey with, played at St. Mary’s with, and actually played in Texas with, his name was Rob Guinn. After Texas, he married a lady by the name of Brooke, and they had a little girl named Olivia. Six months after she was born, he was killed in a car accident. So in honor of him and the impact he made on me, we named our son after him. Old Guinner. Quite the cat this guy was. He was awesome.

Has little Guinn shown any interest in hockey yet?

He wears his gloves to bed. Last night, he put on his helmet, full cage, to watch the NHL Network for 15 minutes before going to bed. He skates now on Wednesdays at Noon. So I’ll cut out of work for that hour to go over and skate around the ice with him.

But one of the things my wife and I are adamant about is [hockey] needs to be something that he wants to do and has fun doing. If that isn’t happening, we’ll find something else. At the end of the day, all I want him to be is a good person who shows respect to his teammates and his friends, has a good work ethic and a good attitude, and is just a good person.

Do you critique his skating the same way that Steve Yzerman critiques your skating?

Oh you heard that story?

I was told you need to bend your knees a little bit more. How accurate is that?

Yeah, that’s what I was told. When we were releasing the new jersey, we wanted to see what it looked like on TV, so I was out there skating laps, pretending to score goals and celebrate, to get an idea what that all would look like.

And apparently as the story goes, down in [former CEO] Tod [Leiweke]’s office, him and Steve [Griggs] and Yzerman were watching the video, and everyone was talking about how much they loved the jerseys and how great the uniform looked. But Yzerman wasn’t saying anything, and then he finally says, ‘That guy needs to bend his knees more.’ He didn’t mention the jerseys at all.

The Tampa Bay Lightning advanced all the way to the Stanley Cup Finals last season, a tremendous stretch for the team, the fans, essentially everyone who supports the Bolts, everyone except the architects and contractors charged with completing the $25 million renovation of Amalie Arena in time for the start of the current NHL season. On the day of the first game, crews were still painting, and the entire sales team was chipping in to clean the new club level.

“There were plenty of times when we wondered if this was going to be ready in time,” Matt says. “But they made it. We were ready to roll game one.”

Do you feel comfortable with your premium product mix now?

Three or four years ago, when we were trying to sell suites, one of the pushbacks we got was not so much the financial investment, but the commitment to 18 tickets to all events over the course of the year. So [the loge product] was something we knew would work because we had prospected so well in the past and knew there were companies that only wanted four seats or six seats. It really fits this market.

To learn more about the recent $25 million renovation at Amalie Arena, ALSD members can login and turn to page 48 of the spring issue of SEAT Magazine.