How the Braves Use Digital Marketing To Drive Revenue 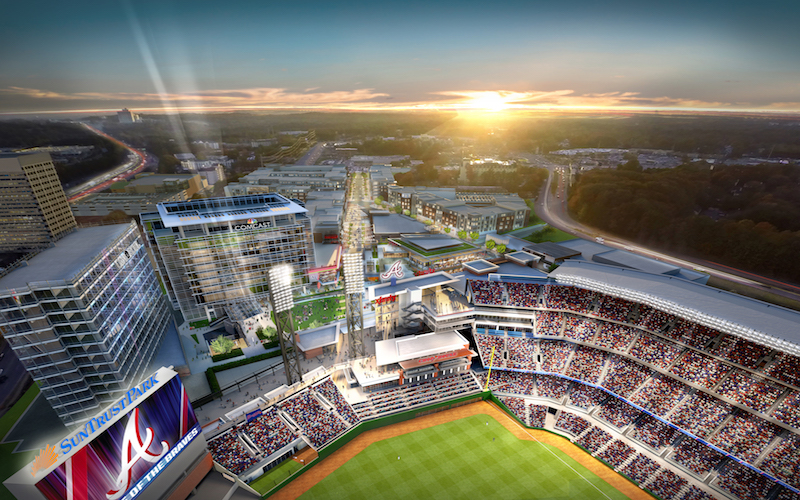 How to best reach customers is a major consideration for any business. As the generation of digital natives and cord-nevers becomes more discerning and influential consumers, and their habits bubble up to older demographics, the sports industry will need to re-evaluate its whole approach to marketing.

In Atlanta, the Braves have a five-person department (three full-timers, one social producer from MLBAM, and one intern) dedicated solely to digital marketing.

“If it’s official Braves content, and it’s hitting your phone, your computer, or your tablet, it’s either starting with our group or coming through our group at one point or another,” says Greg Mize, Director of Digital Marketing for the Atlanta Braves. “We literally touch every department in the front office. I joke that we are by far the most cross-functional department within the front office because really, digital has relevancy for every single group.”

For all teams, that cross-functionality should touch premium in a big way. For anyone who has researched digital marketing, it’s impossible not to come across the now famous statistic from MarketingSherpa: “73% of all B2B leads are not sales ready.”

So that means every time a sales rep picks up the phone to call a B2B prospect, there is a 73% chance that prospect is not ready to buy. I don’t like those odds.

The key to success is content, content, content. Content is king as they say. But it can’t be content for content’s sake. It has to be informative and segmented in order to speak directly to the prospective buyer. The common thread amongst all digital forms of communication, whether it’s social, mobile, web, or email, is that they are capable of this one-to-one connection with fans that educates and excites them until they are ready to buy.

To learn how to drive revenue through digital marketing and best make these educational one-to-one connections, I recently chatted with Greg Mize in Atlanta. Enjoy our conversation below. The transcript excerpt has been lightly edited for clarity.

How do you manage your CRM database?

Very closely. We’re in the midst of upgrading our CRM capabilities. The reason we’re working so closely is a lot of these digital platforms are entry points, whether it’s collecting information on the fan or disseminating information to the fan. And so, CRM has been a huge growth opportunity for us.

In the past, we’ve leveraged it solely for ticket sales, informing our ticket sales team and identifying prospects. Now we’re really branching out and capturing any sort of touch point that the fan has, whether it’s social media, even in-person conversations that an usher may have at a game. We’re really trying to capture every element of how we interface with the fan, collect that, and use that to build a more useful profile of our fans.

Which channels are most effective currently at reaching your buyer personas?

We have so many inbound inquiries. Specifically on social is where we see a lot of that volume – questions about tickets and parking for example.

One of the staff members on my team is responsible solely for customer service as it relates to social media, so listening to everything coming in, listening to fans, having those one-on-one conversations to really understand what’s going on and how we can help. It’s foundational to how people interact.

How much emphasis is put on SEO?

We’re lucky to work with MLB Advanced Media, and they handle elements of the website, mobile web and wired web, so they’re always optimizing.

We’re working on a page right now that briefly highlights the three main ways that you can get to SunTrust Park – if you’re driving, if you’re taking public transportation, or if you’re taking Uber. We’re building a page that in the simplest form is “How to Get to SunTrust Park”. Once that page is ready later this week, it’ll be optimized to the gills because that’s an important question that we’re getting from people.

We’re aggressively pushing the MLB.com Ballpark App. That is going to be your digital guide for all things SunTrust Park and The Battery Atlanta. From purchasing your tickets and your parking to having integrations with Waze that are going to get you directly to your parking lot to navigation throughout the ballpark to highlighting all the areas of the ballpark that fans are going to need to check out, the app is going to be an important component of that.

And a lot of those same storylines and elements will live independent of the app as well, but that’s going to be our heavy push [up until Opening Day]. And it’ll be ongoing as well. We know Opening Day isn’t the finish line. Not everyone who is coming to a game this year will be coming to Opening Day.

What content types are you finding successful right now?

We’ve definitely hit the sweet spot with video. For instance, we have two videos out there that coincided with the first two phases of our parking and transportation plan announcements. Really simple infographics and visuals that are meant to be consumable, not complex. Just very simple.

We’ve really double-downed on video because of the platforms that we’re publishing on. Specifically, Facebook has been doing a lot to give credence in their algorithms to video. We find we can reach a larger audience with video.

Are people communicating with you and consuming your content predominately on mobile devices at this point?

We’re definitely seeing the majority of our web traffic coming via mobile, both from a Braves.com standpoint and also on the social side as well. It’s a different type of video. It has to be treated a little bit differently from specs to length. So we’re definitely designing and creating content with mobile first in mind.

Is there a rule of thumb for how long a video should be?

It depends on the video. We see longer completion rates on video that is shorter. So 30 seconds to a minute is typically the guideline that we use. But we also know that in some instances, we’re going to need longer to tell the story.

Ideally, we like to keep things around a minute, but if we need to extend that because the content dictates so, then that’s something we’re comfortable with.

How do you communicate qualified leads to your sales department?

That’s really where CRM comes in. We’ve actually been very lucky. In the old days, the phone was ringing off the hook. Now we’re seeing a lot of inbound [questions]. What we’ll do for those [prospects] is coordinate directly with our sales team, engage with the fan directly, and connect them with an associate.

On the season ticket side, it’s not an impulse buy. There’s a time commitment. There’s a higher price point than just a single game ticket. A lot of times, we see the value of, even if it’s an engagement that starts on digital, connecting them with a real person because there are questions, and the process is long and little more involved than just tap-tap-buy.

Let’s get into some more specifics with social. Facebook (Live), Instagram (Stories), Snapchat, Twitter, Periscope, YouTube…there are so many platforms at this point. How do you manage all those platforms?

The secret sauce is manpower. I know sometimes it’s difficult to get that headcount. But when I started in 2014, it was a whole different world. You could have engaging social content on the big three at the time – Twitter, Facebook, and Instagram. Especially as it related to gameday content, you could capture everything you needed with one phone.

What’s happened now as more platforms have come on board like Snapchat, Instagram Stories, and really I think the biggest evolution that happened is the interjection of Live, so Facebook Live, Instagram Live, Periscope, [those platforms] have really made it quite honestly impossible to have one person, one phone capture all of this content. If you’re Facebook Living batting practice, that phone is out of commission. And you’re not able to be capturing content for other platforms at that time.

So staffing up and giving ownership to all the platforms [is critical]. Not to say we aren’t 5-tool players. and someone on Snapchat can’t also migrate over and help on Twitter. But we like to have that ownership where one person is responsible for one platform because they are vastly different in the type of content we’re creating and publishing.

Is it also helpful to divide and conquer because you’re serving slightly different audiences on each platform?

That’s why we feel it’s important to have a well-rounded team that can bounce back and forth from platform to platform.

What’s your most popular platform?

There really isn’t one all-star platform. If we looked at them like that, the other platforms would suffer.

We really like to focus on all our platforms. There’s definitely overlap from platform to platform, but some people are just locked in on Facebook. What we don’t want to have happen is have them miss out on something because they might not be on Snapchat. So that’s why we try to highlight what’s happening on each platform and push people around. At the same time, if you’re locked into one platform, we’re respectful of that and will continue to deliver what we feel is engaging and informative content on each of them.

Is your content meant to be entertainment for fans, or are you also producing educational content? I’m specifically thinking in terms of your premium seat holders and corporate partners. Do you produce content specifically aimed at educating prospects on opportunities and solutions that are available at SunTrust Park?

We’ve already launched some of that. We have a weekly content series called “A Walk in the Park” where we focus on all types of topics and areas within the ballpark. Premium has been a heavy push on that, where we’re showcasing the build of these premium environments and providing [content] to our premium seat holders as a way for them to get a peek and see what’s happening at their soon-to-be home at SunTrust Park.

It’s a whole new experience for fans here in Atlanta – the idea of having stuff to do before the ballgame and after the ballgame – not just for our premium seat holders but all our season ticket holders. We're being very open and communicative with them because they’re going to be the one’s who get to see it first. They’re going to be the one’s who will become advocates for us. So we’re doing everything we can to make their gameday experience seamless.

Has the move to SunTrust Park and Cobb County changed your buyer personas at all?

We want to be as relevant to a fan who lives in Cobb County to one who lives in Seattle, Washington. Just because someone lives on the other side of the country doesn’t mean that we should ignore them. Again, what we say to them is a lot different. But we’ll continue to provide content and allow them to follow the team.

How is SunTrust Park equipped from a technology standpoint to handle all your objectives and all your fans’ digital desires on gameday?

The most defining statement is [SunTrust Park] is going to have the fastest Wi-Fi in North American sports. Through our partnership with Comcast, they’ve got a terabyte pipe going into the ballpark and the development.

Let’s put it this way: connectivity will not be an issue. And that’s foundational. Fans are on their phones, whether that’s for content we’re putting out, or they’re texting with their friends or putting content on their social platforms. We want to be enable that.