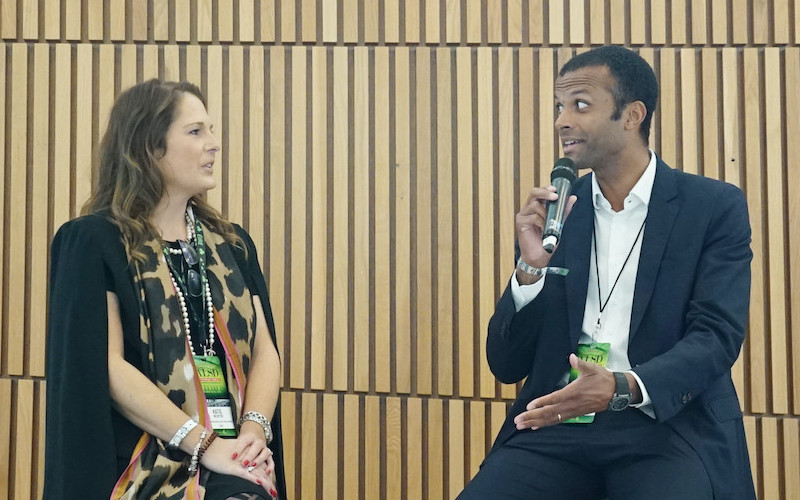 Standing over six feet tall with an athletic presence, he stands out in an ALSD crowd. And that’s right where we found Real Mallorca CEO Maheta Molango at ALSD International 2019 in Dublin – amongst the delegation of hospitality salespeople, service providers, vendors, and suppliers from across the global sports and entertainment venue marketplace.

The former professional footballer, who played for multiple top-tier clubs including Atlético Madrid and Brighton & Hove Albion, where he once scored a goal in a record 12 seconds into a match, sat in the front row of each conference session, listening intently to each speaker, scribbling copious notes. He was there to learn, not be a celebrity or chief executive above the madding crowd.

Molango came to Real Mallorca from Baker & McKenzie in Madrid, where he practiced law, specialising in labour/employment law and sports law after retiring from the playing field. He was appointed CEO of Real Mallorca in January 2016 after the club was purchased by a U.S. investor group led by Robert Sarver and Andy Kohlberg, owners of the NBA’s Phoenix Suns, and Steve Nash, two-time NBA MVP.

“What we tried to do is make sure it wasn’t just about football, or soccer, but also about having a real business enterprise and a proper stadium.”

And that’s where we pick up the story from the ALSD International stage, where Molango helped open the show with a memorable keynote interview.

The most obvious difference between sports leagues in Europe and North America is the reality of relegation for European clubs. In his short time in Mallorca, Maheta Molango has had to make investment decisions with the club relegated to competing in the third tier of Spanish football.

“We joined the club, and the first thing we did was get relegated, which was a bit of a disaster,” said Molango. “Mallorca was a club which played in LaLiga for 15 years, played in European Finals, and was a successful team. But it was good because we could change the club. We could change the culture.”

After only two years and back-to-back promotions, Real Mallorca is back competing in LaLiga.

Leadership’s focus on changing culture applies beyond on-pitch victories. Real Mallorca has also introduced many innovative refurbishments to its aging, municipality-owned stadium. Chief among them is the new VIP Corner at Son Moix Stadium, located pitch-side on the venue’s running track, turning a significant infrastructure disadvantage into prime real estate and a revenue-generating opportunity. Influenced by the club’s NBA owners, this premium hospitality area is akin to courtside seats in a basketball arena and provides a sightline and unmatched experience in LaLiga to watch the league’s best players like Messi and Luis Suárez.

Given the globalisation of the sports venue marketplace, North American venues can learn a significant amount from European counterparts, and vice versa, as best practices and new ideas cross oceans. But ultimately, any continental differences are amplified by that threat of relegation.

“The Phoenix Suns can look five years ahead and know that even if they’re not good, LeBron James will still come [to their venue],” Molango says. “They can plan ahead. They can sell tickets ahead of time. They can have a proper business plan. In Europe, I don’t know if Messi comes again. This really affects the way you have to plan.”