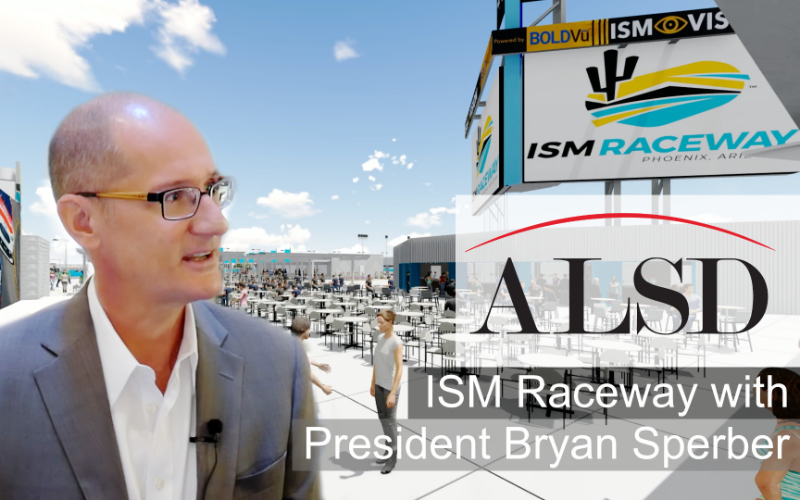 Editor's Note: Bryan Sperber recently announced he will be amicably departing ISM Raceway in November when the $178 million track renovation is complete. Bryan, we wish you the best of luck as you pursue your next challenge.

Bryan, we first interviewed you about the changes at your track this time last year. Some things have evolved since then, starting with the name of your facility. Catch us up to speed (no pun intended) on how we should address your facility and the synergies between you and your new naming rights partner.

For many years, folks knew us as Phoenix Raceway, and we’re pleased that we’ve now sold the naming rights to a technology company called ISM Connect. Now the name is ISM Raceway, and it was significant for us for a number of reasons.

The partnership has been able to bring a lot of attention to the project itself. We would not have been able to secure a great company like ISM Connect if it wasn't for this project. After the long-term agreement was reached with ISM, all of us began thinking collectively about how we bring technology forward into this new venue and introduce new fan experiences from a technology standpoint.

We know that we’re building a great bricks-and-mortar environment, whether it’s the new seats or the infield project, which will be spectacular. All of that is on point, but we complement it with leading-edge technology. Having a company that’s in the tech space like ISM will help us create the 360-degree fan experience, where it’s a digital experience that complements great bricks and mortar. I couldn’t be happier about the partnership that we have with ISM Connect.

Starting with the infield space, can you update us on the progress of all the renovation components, what has been finished to date, and what you’re driving towards, leading up to the event in November?

The whole project will be completed in time for the Can-Am 500 NASCAR Weekend November 9, 10, and 11 – the semifinal in NASCAR’s playoff.

The infield is one area of the project that I’m particularly proud of because we’re transforming what really was a working area behind-the-scenes in the back of the house. I’m pleased to share with you that we are completely transforming that infield to not only be able to address the working environment in a much more elevated way for race teams and for media, but we’re also creating an entertainment area for race fans.

It starts with a brand-new tunnel that will be opened up, connecting the midway and grandstand area to the infield. We are calling this experience The INfield. Once fans arrive in The INfield, the first thing they’re going to notice is they’re not entering a working garage. It’s going to look and feel aesthetically like an entertainment zone. They’ll see bars. They’ll see restaurants. There’ll be lots of color. There are certain elements of The INfield that will be spectacular.

There will really be two cornerstones of The INfield. One is the NASCAR garage, which has been our locker room. It’s always been off-limits to race fans unless you are part of a team or an official. What we asked our design team to do is to figure out a way to have race fans enter that garage area. I’m pleased to share that we’ve been able to crack that code. We’ve created a way for the working garage to still be able to do all the functions that it needs to do, but with the other side of the garage area quite literally opening up to this new  INfield fan experience.

The other cornerstone of The INfield is Gatorade Victory Lane. Having been a long-time veteran of this sport, I’ve been lucky enough to be able to participate in so many amazing victory lanes, historic victory lanes, emotional victory lanes. It’s always bothered me deep down that the race fans have not been able to have that same experience.

“Race fans will be able to literally walk into the Monster Energy NASCAR Cup Series garage. They’ll be able to see the teams working on the racecars, hoods up… They will literally be in our version of the locker room.” – Bryan Sperber, ISM Raceway

We again asked our design team how to be consistent in how we deliver the industry and media a victory lane, but also how we can create a way for race fans to come in and share the excitement. We’ve been able to do that. I’m over the moon. I’m so thrilled because for the first time, race fans will be able to feel what it’s like to be in Gatorade Victory Lane. We’ll only be able to do that at ISM Raceway, and I can’t wait.

Was there anything that was completed by the spring race that we should talk about?

This project has been underway now for a year and a half, physically, in terms of construction. The pre-process was obviously longer than that. Different elements of the project have come online, and we’ve worked around events, putting up our “pardon our dust” signage.

Two areas are particularly exciting. One is now called Dos Equis Curve, which is a high-end club for about 300 guests. Since I was at last year’s ALSD Conference, we’ve been able to partner with Dos Equis on naming rights for the club. The club debuted last November with phenomenal success. It sold out, and fans are thrilled with the environment.

It’s a high-end luxury environment. You feel like you’re entering a Hollywood or Beverly Hills hotel lobby. It’s absolutely, stunningly gorgeous. Our partnership with Levy is really bringing the food and beverage to life with plenty of cold Dos Equis beers to go around as well.

When we got to the spring race – TicketGuardian 500 – the new ROLL-BAR at the Wheelhouse and Trackside Bar & Grill also opened up. The ROLL-BAR is a premium ticket for race fans to add on to their grandstand seat. It’s a hospitality environment with food and beverage and restrooms, all air-conditioned. We’ve got garage doors on this venue, which can open up when the weather is great to allow fans to go out into a patio environment with couches and tables. They’re able to feel like they’re part of the midway experience, yet still have that exclusive feeling. It was nice to see the fans able to migrate out of a temporary tented environment into a beautiful permanent facility.

The new Trackside Bar & Grill replaced a very old venue. It was a fan favorite, a nighttime entertainment area that folks who were camping on our property always loved to go to. The place is always jumping into the wee hours, fans taking it deep into the night, when I’ve long gone to bed.

“It was nice to see the fans able to migrate out of a temporary tented environment into a beautiful permanent facility.” – Bryan Sperber, ISM Raceway

We transformed the space. We knocked the old building down, but then we recreated it, updated and elevated the physical appearance, again with the creature comforts like permanent restrooms. It’s a purpose-built bar, great food and beverage options, a beautiful patio, met with rave reviews by race fans.

I don’t think fans knew what to expect when they first arrived on the property, but by the time the weekend was over, Trackside Bar & Grill had become a fan favorite. The place was back to jumping. I had a chance to go there during the race, and the thing that surprised me was that place was full. You have race fans with race tickets, and they love the Trackside Bar & Grill so much that they were leaving their seats to come down and have some cold beers. That was cool.

Read Part Two of our exclusive interview with Bryan Sperber.