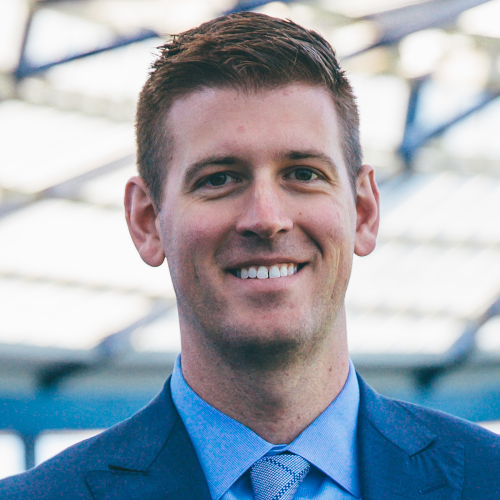 Jake Reid was named Sporting Kansas City President in January 2016, becoming the youngest President in Major League Soccer at the age of 33.  In 2018 he was named President & CEO. He has worked for the organization since 2010, previously serving as Vice President of Ticket Sales and Service before his promotion to Chief Revenue Officer in 2012.

Under Reid’s leadership, Sporting Kansas City has transformed from an MLS organization that ranked last in nearly every financial measure in 2010 to one that is now among league leaders for season ticket sales, corporate sponsorships and merchandise and concession revenue. Reid has contributed invaluably to each of these departments over the last eight seasons, building Sporting Kansas City into a model MLS organization.

For the last decade, Reid has strived to become an industry leader in the implementation of technology solutions for strategic sales and revenue generation. Children’s Mercy Park continues to be a living laboratory for next-generation applications — including mobile ticketing/ordering and data capturing to tailor the fan experience.

Reid started his career in the National Basketball Association, serving as an account executive with the New Orleans Pelicans and a sales manager with the Charlotte Hornets. He then moved to England to work for Derby County Football Club as a ticket sales manager, helping the club achieve the highest average attendance in the 2008-09 English Football Championship while also outdrawing nine Premier League teams at the gate.

Outside of the Sporting Kansas City organization, Reid is a board member for the Kansas City Sports Commission, The Victory Project and Boys Hope Girls Hope of Kansas City.  He and his wife Danielle have two beautiful boys, Carter and Caleb.