This year’s ALSD Conference and Tradeshow culminates with a tour of Marlins Park, a venue hosting multiple mega events in 2017. Last but certainly not least on the agenda, the ballpark boasts a wide variety of unique premium amenities.
By Max Snyder, ALSD 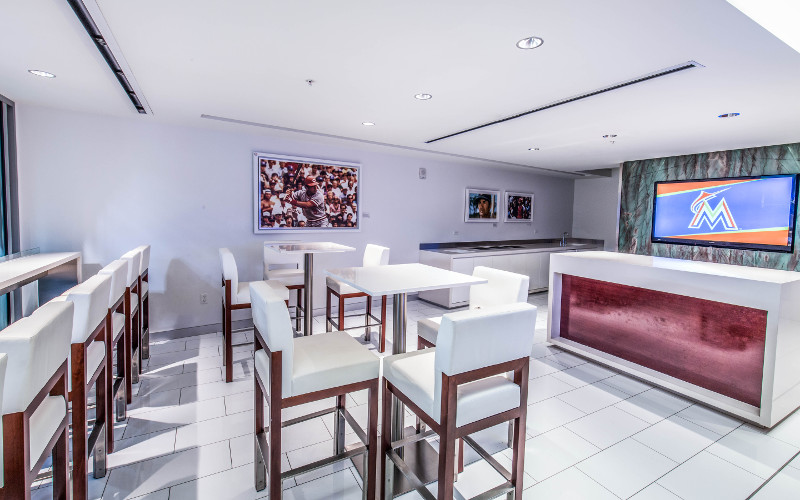 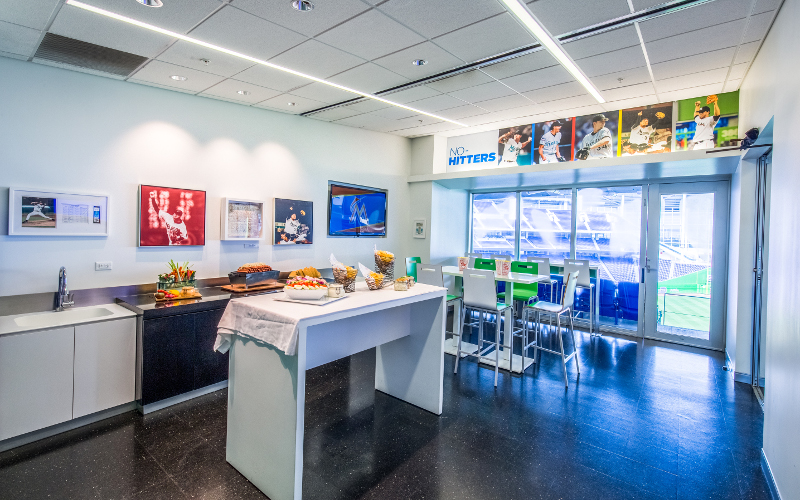 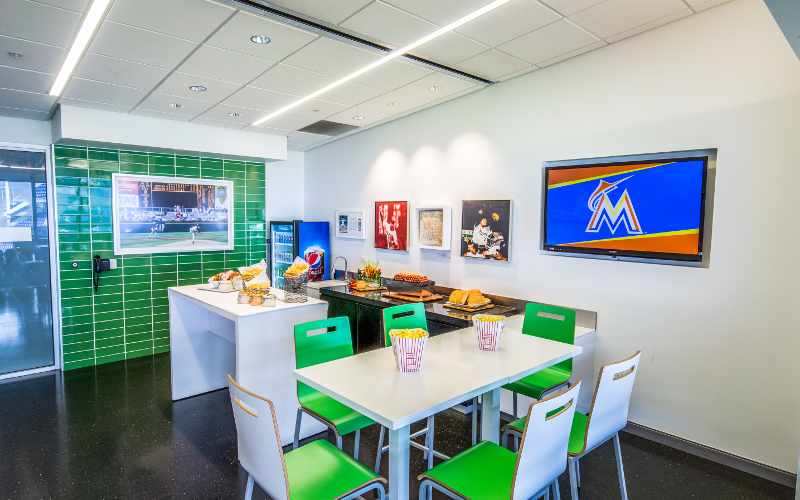 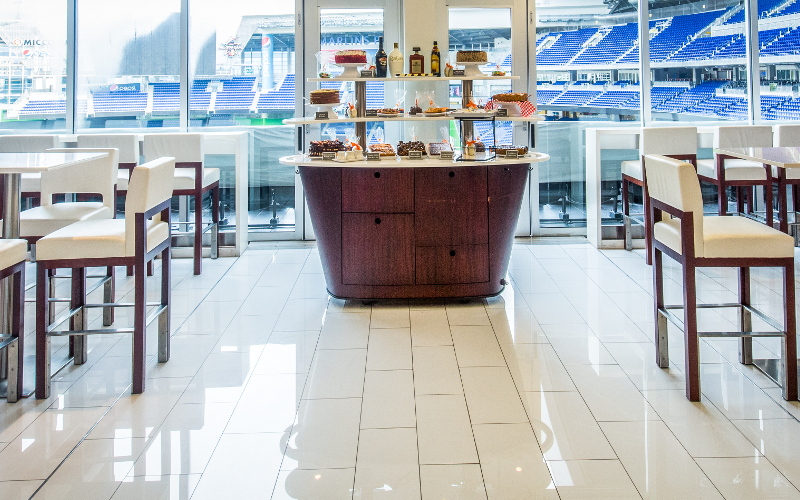 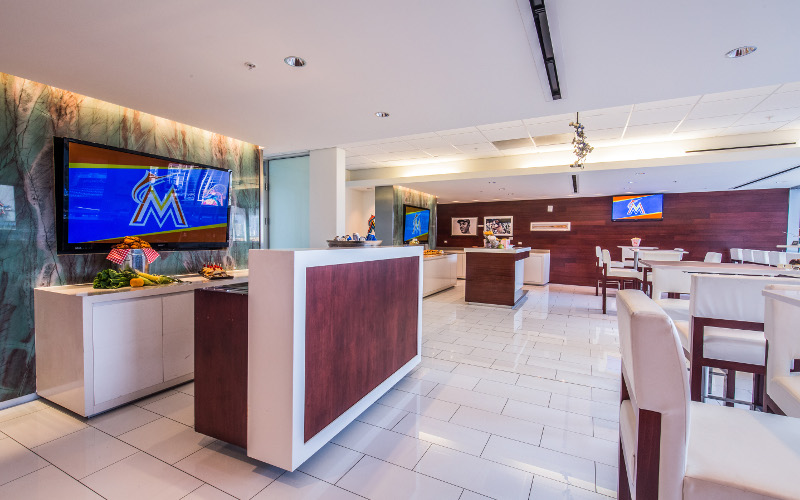 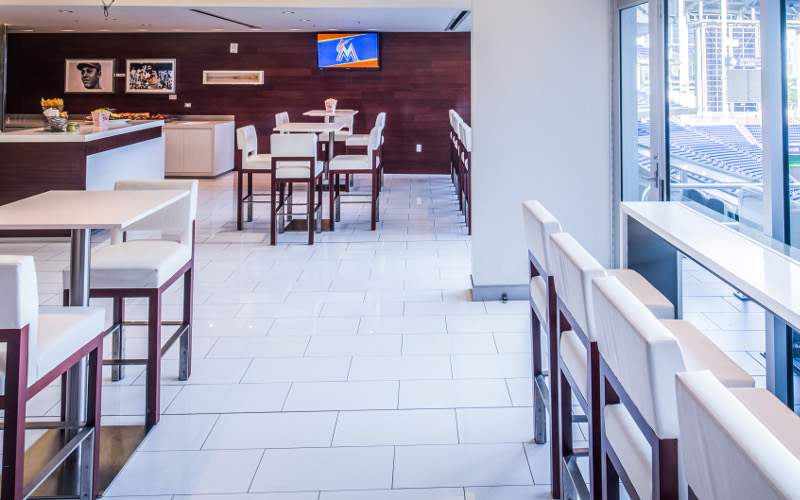 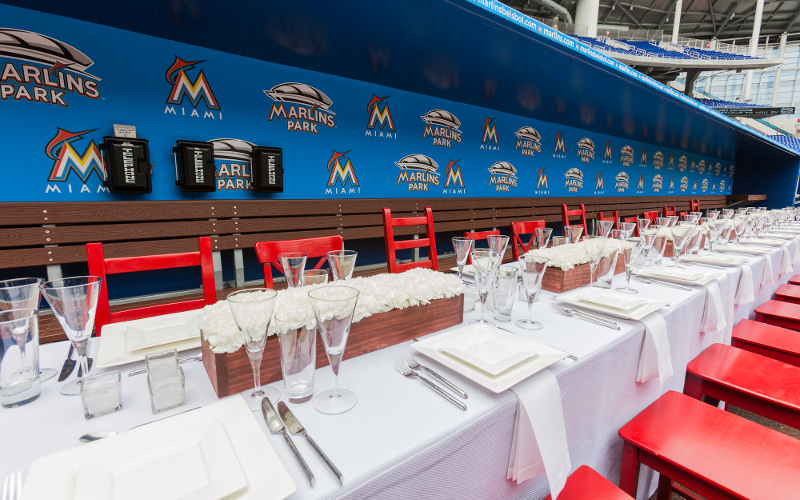 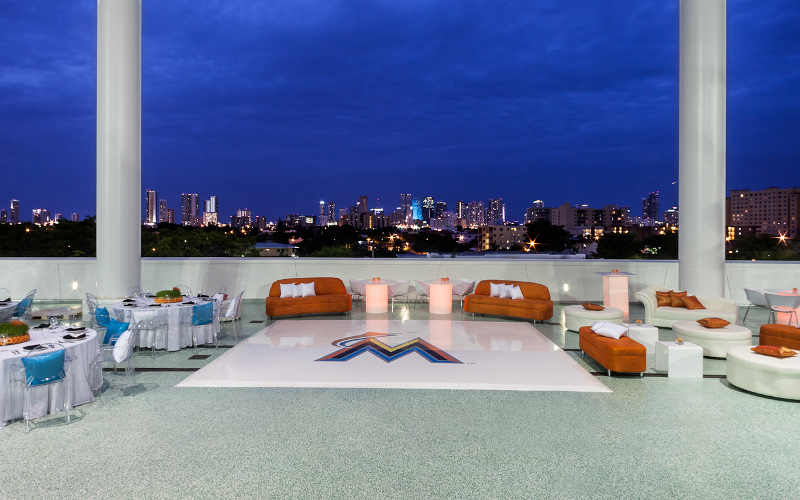 This summer at the 2017 ALSD Conference and Tradeshow, we are set to tour Marlins Park, home of the Miami Marlins. Opened in 2012, and now the second youngest MLB stadium to the Atlanta Braves’ SunTrust Park, the ballpark is anything but old news.

More at the ALSD Conference

Tucked into the heart of Miami’s Little Havana neighborhood, Marlins Park meshes contemporary design with America’s pastime. The stadium’s exterior consists of an eye-catching white stucco and glass molded into a uniquely curved structure that has a modern style unprecedented among American baseball venues. Other notable features include the stadium’s three-panel retractable roof and its operable walls that provide a panoramic view of downtown Miami.

The 37,000-seat Marlins Park holds 46 suites and a number of club areas for its premium clientele.

“We really have four different types of suites at the ballpark,” says Truscott Miller, Director of Suites at the Miami Marlins. “On an annual basis, [they sell] in the range of $80,000 all the way up to $280,000 based on the location of the suite.”

“I’ll catch people just walking the halls and looking at the pictures and murals, and reading the descriptions of what each moment was.”

The breakdown consists of 14 Founders Level suites and ten Legends Level suites behind home plate, each with a capacity of 22 seats. Other suites include 12 MVP suites along the first and third base lines, six Fiesta suites in right field, and two Championship suites for parties of 40 and 60, respectively.

In addition to all 46 suites, the Marlins have four different club spaces, of which their Ricoh Diamond Club is the most exclusive. Other club areas include the 32-seat Hall of Fame Club and two Dugout Clubs. All premium food and beverage offerings are provided by Levy Restaurants. 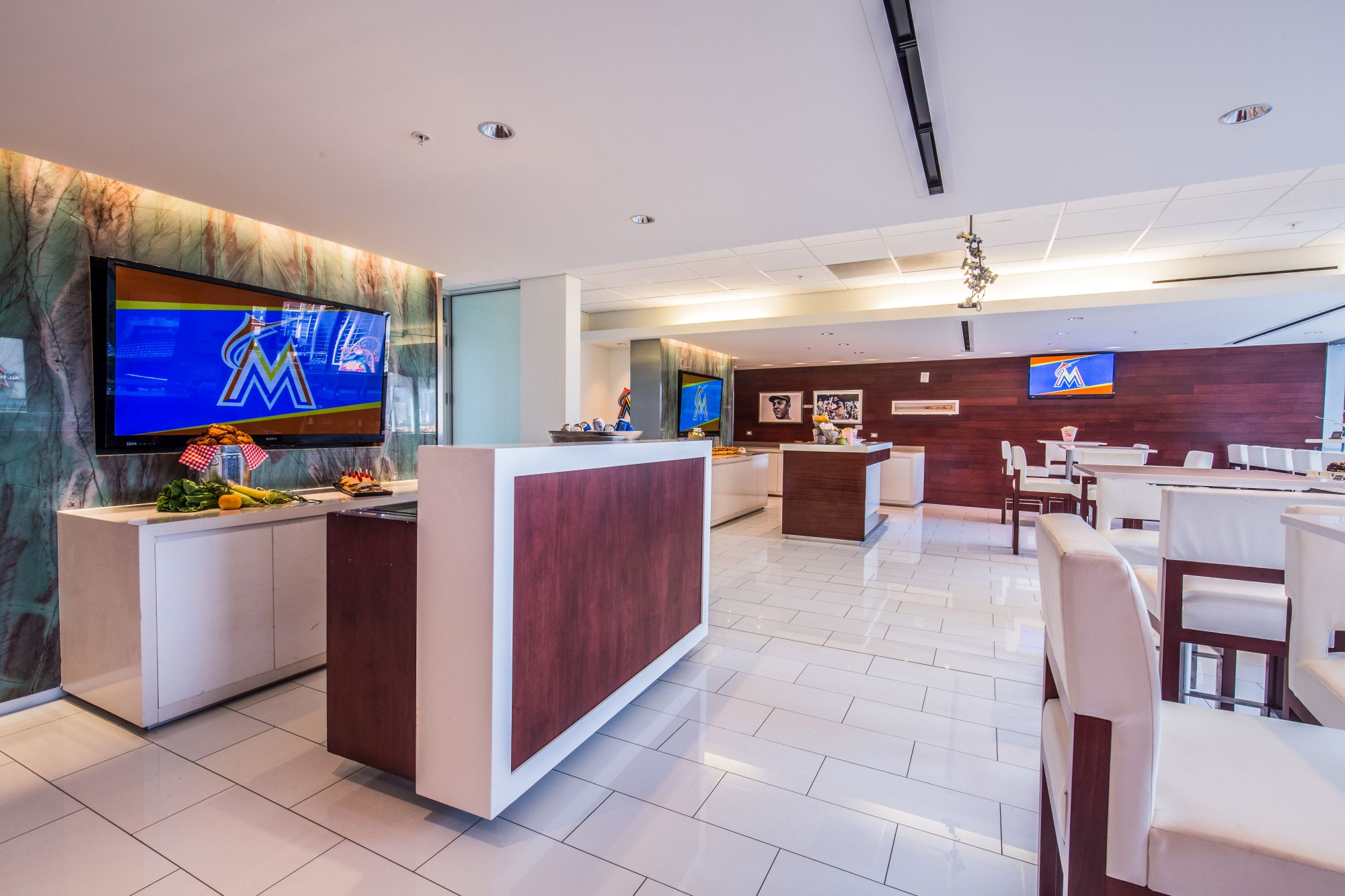 ALSD 2017 attendees will have an opportunity to visit these unique premium destinations when we tour Marlins Park on Thursday, July 13th after the ballpark hosts the 2017 MLB Midsummer Classic.

Located behind home plate on two respective levels, the Founders and Legends suites serve as the staple to the Marlins’ luxury suite offerings. Each with a capacity of 22 seats and predominantly white-colored finishes, the design is clean, contemporary, and uniquely Miami. Both the walls of the suites and the concourse are decorated with pictures of famous baseball legends, mixing modern design with an appreciation for the history of the sport.

“Both of our suite levels are themed with Hall of Fame players or magnificent moments in baseball, like the Willie Mays over-the-shoulder catch,” says Miller. “I’ll catch people just walking the halls and looking at the pictures and murals, and reading the descriptions of what each moment was.”

Other suite options share a similar modern design with flashes of color, consisting of various capacities to accommodate parties of different sizes. The Fiesta suites have the flexibility to be combined into three larger suites if needed.

At $150-$355 per game, the Ricoh Diamond Club is the Marlins’ most high-end premium offering, featuring an all-inclusive dining experience equipped with a private entrance, buffet carving stations, and oversized white, cushioned seating consistent with the contemporary theme.

“The Diamond Club has 387 seats located right behind home plate at field level,” says Claude Delorme, Executive Vice President of Operations and Events at the Marlins. “It’s an all-inclusive concept sold exclusively to our season ticket holders, and it’s the first area that was sold out in the ballpark.”

In addition to the all-inclusive dining experience, other amenities include parking garage passes, in-seat service, and the ability to reserve a private conference room prior to game time. Incorporating Miami’s coastal character, two 450-gallon aquariums are built into the backstop behind home plate, allowing patrons in the first and second row to see the fish swimming during the game.

“You don’t see a lot of venues that allow the fans to be just next to the clubhouses, and these seats provide that ability.”

The Hall of Fame Club provides the amenities of a suite to patrons who only need a few seats.

Located right behind home plate on the Legends Level, the Hall of Fame Club offers a more intimate club experience with only 32 seats and an attached club space similar in size and feel to a double suite. Like the Diamond Club, garage parking and buffet-style dining are included, in addition to an in-club service attendant.

“I say [the Hall of Fame Club] is our test area for new menu items for the Diamond Club,” says Miler. “They’ll bring in a lot of food carts. They did a guacamole bar. They did a baked potato bar, just to see what might entice people. And then based on that success, they’ll take it to the Diamond Club.” 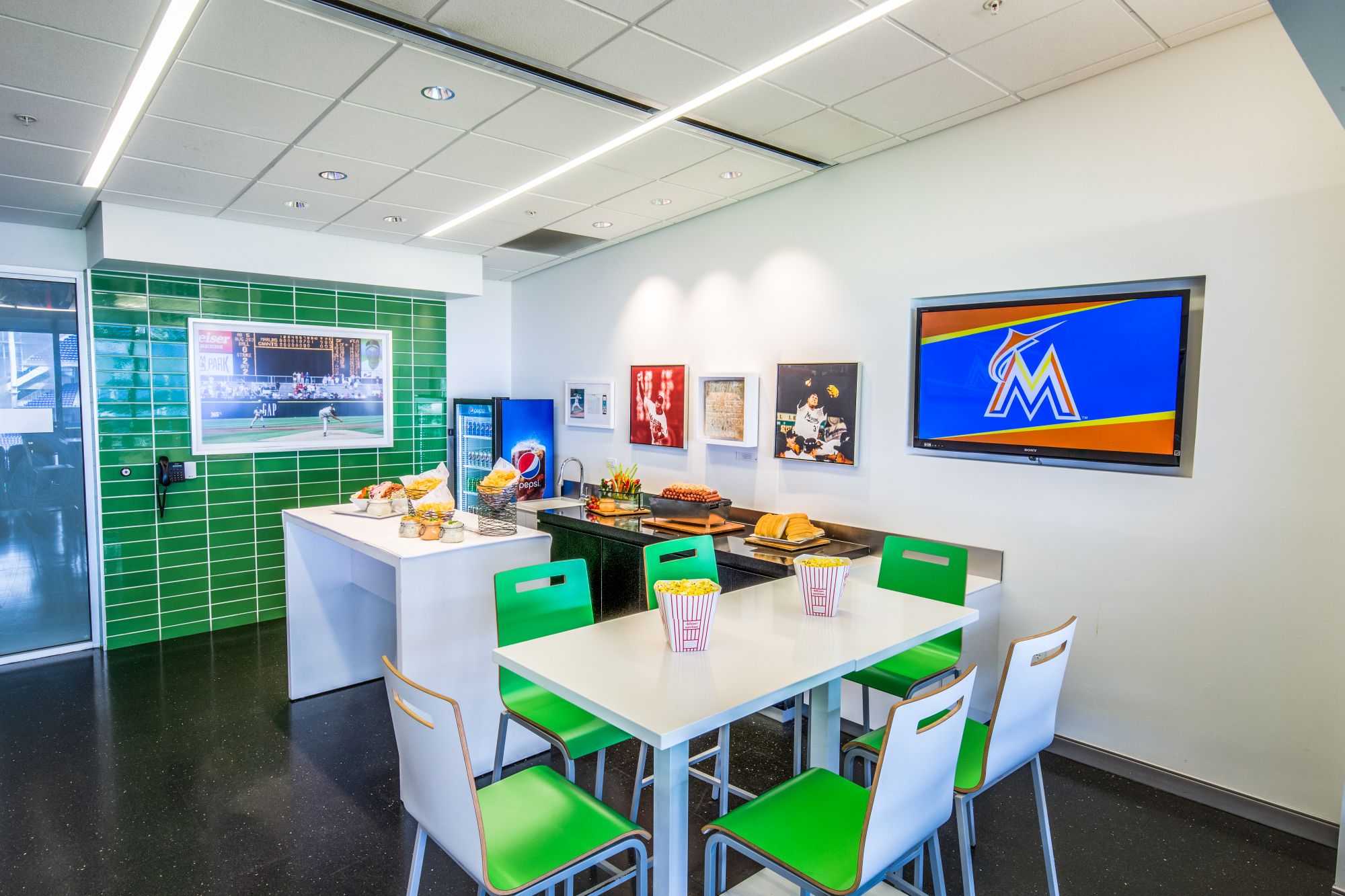 Interior layouts on both suite levels at Marlins Park juxtapose modern design that is uniquely Miami with an appreciation for the history of baseball.

The Dugout Clubs, located at field level on the first and third base lines, round out the Marlins’ official premium roster. Each Dugout Club, with a capacity of 150, has its own private entrance, all-inclusive food and beverage, in-seat service, and private restrooms.

“That’s at field level right next to the clubhouses, so fans can actually see the players going through the dugout and actually moving around at field level, which is kind of a unique feature for this ballpark,” says Delorme. “You don’t see a lot of venues that allow the fans to be just next to the clubhouses, and these seats provide that ability.”

In addition to the suites and club areas, The Clevelander provides a group event experience akin to being on South Beach while at the game. Stationed in left field, just next to the visiting bullpen, The Clevelander is furnished with three bars, several televisions, an in-house DJ, and most notably, a swimming pool.

“You can see the guys warming up for the visiting team, and it’s almost like you’re part of the outfield,” says Delorme. “When we lowered the fence last year from eleven and one-half feet to seven feet, it made a big difference. In terms of fan experience, it was the area that was improved most significantly from that change.”

The Clevelander has a capacity of 450, and tickets are sold on a per-game basis. The space can also be rented out for full games.

While many of the Marlins’ premium products are unique, the team recently established more dynamic premium leasing plans to meet the needs of the Miami market.

“What I’ve found as my biggest takeaway working in baseball as opposed to other sports has been the conduciveness of the sport for conducting business.”

“What we’ve found in this marketplace is that 90% of the companies have 20 employees or less. [The biggest obstacle] has been the company having enough bandwidth and resources to utilize the suite for a full-season capacity,” says Miller. “So we’ve tailored our programs to have six-game, 10-game, and 20-game plans, and now we’re starting to move the needle with adding new partners.”

In addition, Miami fans typically buy tickets at the last minute and don't mind arriving late to events. As a result, the Marlins have been focused on reducing traffic and improving means by which fans can access the venue.

As a form of added-value for their suite holders, the Marlins’ suite staff members do their best to ensure that they are fully utilizing the assets that come with operating a major league team. Experiences such as throwing out the first pitch, delivering the rosin bag, or stealing second base are built into suite packages to ensure that these assets don’t go to waste.

The team also hosts several networking events for its premium clients as part of its Baseball to Business Program.

“What I’ve found as my biggest takeaway working in baseball as opposed to other sports has been the conduciveness of the sport for conducting business,” says Miller. “It’s a passive game, so you can really get to know your guests and be involved in a strong conversation.”

What areas of Marlins Park are you most looking forward to seeing?
Write to Max at max@alsd.com.

Click for more information on conference registration and the full schedule of events.