She’s as confident, yet grounded, as any leader in the business. She learned the service trade at Four Seasons Hotels and Resorts, including a stint at the Reg Bev Wil. She’s Dashawnda Brown, VP of Suite Services at The Madison Square Garden Company.

Part One: Can I Start with How Fly You Are?

A professional makes the other person feel good first. Whether by training or second nature, it’s a required art in the premium seating space to make the other person’s experience every day, every way.

It’s why I wasn’t surprised when my recent interview with Dashawnda Brown, Vice President of Suite Services at The Madison Square Garden, began with her asking me, “Can I start with how fly you are?”

I discovered the silver bullet to being great at customer service is confidence. Dashawnda Brown wears it as well as she wears her own super-fly wardrobe. To uncover where she got her confidence and how it turned into a lifelong professional journey, I started right there, with the wardrobe.

Premium seating professionals have to look the part, especially in front of clients. What’s your philosophy on appearance?

I laugh when my counterparts tell me, ‘Oh my God, you look amazing today!’ because I make it a point to dress my best when seeing clients and on event nights. Otherwise, when it’s a regular day at the office, I take it down a little.

Plus, John Abbamondi, our EVP of Tickets, Clubs, and Premium Hospitality is a snazzy dresser, so I have to keep up with John!

For young professionals with a limited budget, how can they make their wardrobes pop and look the part?

People think I spend a ton of money on my clothes. I don’t. I’m a couponer. Most of my clothes are from Macy’s with a few high-end brands mixed in. I even shop at Target for clothes. I’ll buy anything that’s nice, but I don’t buy anything full price. You don’t have to spend a lot to look presentable, polished, and pulled together.

“People think I spend a ton of money on my clothes. I don’t... You don’t have to spend a lot to look presentable, polished, and pulled together.”

My mom could stretch a dollar. I learned to buy nice clothes, quality pieces, and accentuate them with less expensive pieces. Look, I have shoes from Payless and shoes with red bottoms. I buy handbags from Target, because you know what, it’s all about how you pull it together.

For my staff, it is never my expectation that they spend a lot, but I do expect their clothes to be well-fitted, cleaned, and pressed, and for our men to wear quality ties. Ladies have a little leeway, as long as the outfit is appropriately fitted, fitting for our workplace, and representative of our product.

Are we closing in on a level playing field for men and women working in sports business?

We’re probably still working towards leveling the playing field, and if we want the issue to go away, the same opportunities must be afforded to every person, regardless of gender. 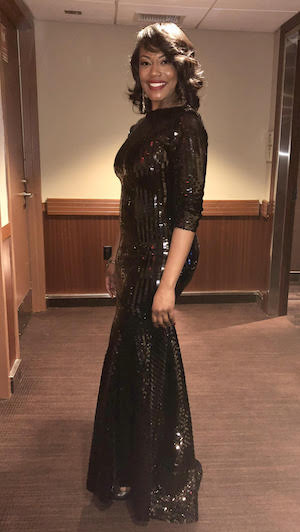 Dashawnda at the 2018 Grammy Awards.

Do you still see women leaning to roles in service rather than sales?

Yes and no. It may seem ‘more female’ to work in service because of the way girls are raised, or because the attributes society presses for girls to excel in – get along, play nice, be kind, be apologetic – can be equated to a successful service platform.

We want to be liked, that’s our problem!

[Laughing] Right! Sometimes there’s that innate bias, where you may have two candidates for a sales role who both kick ass, but because of the unseen bias, the guy may be chosen, especially for sales roles. But look around. There are women like Michele Kajiwara at STAPLES Center, and Kemyell Rieves and Christie Landi at MSG who are killing it. We have great female salespeople here. It’s not a gender thing, it’s an attitude thing.

Additionally, I think we’ll see more women rise on the sales pedestal, celebrated for their work, and admired by the next generation of salespeople because we have examples that it’s possible.

Take us back to where you learned confident customer service.

[Pretending to write in lipstick on my chair] The Reg Bev Wil?!?! Tell me it’s true!

Yeah! The Reg Bev Wil for all our Pretty Woman fans out there.

I absolutely love that hotel. The Reg Bev Wil was twice the size of the Four Seasons Hotel Atlanta, and because LA has two NBA teams, we were able to book double the room nights, get more traction, and push more NBA business around the Four Seasons network.

I earned a promotion to Director of Sales at the Palo Alto property, but before embarking on that, I did a four-month stint at the Four Seasons Whistler, which was amazing.

Funny story. I have a girlfriend who still works there. She and I would go places, and everybody would know me. I wondered, ‘Why?’ And she said, ‘You know you are the only black woman in Whistler, right?’

So I did Whistler, and then I went to the Four Seasons Hotel in Palo Alto. I actually had a huge personal metamorphosis while there and realized I wanted to get closer to my family. One of my clients, the Nets, called and hired me, and that’s how I ended up in sports. When I started with Nets Basketball, I had no idea about sports. I mean, I had never even played sports!

I wasn’t really interested. My family was very traditional, you know, going back to the things girls are raised to do – cook, clean, make a nice home.

“I think we’ll see more women rise on the sales pedestal, celebrated for their work, and admired by the next generation of salespeople because we have examples that it’s possible.”

So I never played sports, never thought about sports, didn’t even know there were jobs in sports other than being on the ice, the field, the court. I literally stumbled into this business, and it turned out to be my passion and what I was ultimately preparing myself to do.

After four seasons with the Nets, I decided I wanted to save the world, and so I moved to DC to work for another client, UNCF, a non-profit. I spent almost three and a half years there, saving the world, but going personally bankrupt.

Then the Garden called, and it was the call that I didn’t even know I was waiting for. I flew up, had an interview, and here we are four years and two months later.

They called you every time?

Yes, I feel very blessed. The new role or position found me every time.

Most people dream of being called. What’s the secret sauce?

It’s branding. I started my career as a salesperson, and I was a salesperson who provided unbelievable service. It’s a blessing to be thought of when someone has an opening and a need for talent. As a salesperson, my clients knew me to be the person who would go above and beyond, get a sale closed by figuring out creative solutions and providing great service, which opened up the door to my career in service and retention.

Others might tell clients that dates don’t work or there isn’t a fit. I would suggest to the client, ‘If you can do this, I can offer you that.’ Working through challenges, I’ve developed some of my best client relationships. A few of my favorite clients here at MSG started out with them yelling at me about something that went wrong or didn’t happen and ended with us finding solutions and building a great working relationship that in many cases have turned into friendships. 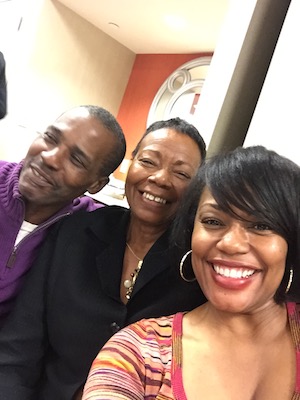 Dashawnda at home with her mom and dad.

Did the hotel industry give you the experience and thick skin to be able to handle challenges?

The hotel industry gave me the creative thinking to work through challenges. The Nets gave me thick skin. During my first team meeting, someone had to ask the group to tone it down and ‘stop scaring the new girl.’

I never really cursed in the office in previous positions. Rarely did co-workers raise their voices. Four Seasons was a very genteel company, whereas sports are more assertive. Sports are where you develop the guts to just do it and the thick skin to bear it.

Yes, you have to be able to speak up. My grandmother is from Alabama, and her saying growing up was, ‘A closed mouth doesn’t get fed.’ And it’s certainly the truth in sports. Especially for women, in any situation where you need to negotiate, obtain resources for your team, or be recognized for the great work your team is doing, remember, a closed mouth doesn’t get fed.

Do you walk a line of being too assertive at the risk of not being liked?

It’s an evolution, and I’ve learned to push when necessary, play the back field when needed, and I’m open to driving the train at any time. I’m really lucky that my personal life outside of work is very fulfilling. I have great friends and a very tightknit family that loves me. So I can come to work to work.

People don’t necessarily like the new girl saying, ‘No, we aren’t going to do it that way anymore.’ People may not like some of the things you do initially, and that’s ok, if the end goal is improvement, and everyone hopefully plays a part in the change and benefits from the improvement.

A leader can often be on an island. But leaders can’t second guess. They confidently decide on their path and encourage others to join them.

Read Part Two (Bringing the Pizzazz to the Operation) of Our Member Highlight with Dashawnda Brown.