She’s worked in North America’s two largest markets in two of their largest arenas. She has experience in self-operated F&B models and now brings her expertise deep in the heart of Texas. She’s Julie Margolin, Director of Food & Beverage at Dickies Arena.

Julie Margolin has seen a thing or two in the venue marketplace. Having spent most of her career traversing back and forth between New York and LA, she's accumulated a wealth of knowledge in the foodservice segment of our industry – both third-party and in-house operations.

Now at Dickies Arena in Fort Worth, scheduled to open in November 2019, she is putting it all together, pulling up a seat to the design table, and bringing a first-class food and beverage experience to a unique set of sports and entertainment fans in one of the fastest growing cities in the United States, all in her brand-new cowboy boots.

Your food and beverage here at Dickies Arena is an in-house operation. What are some of the advantages of that approach? 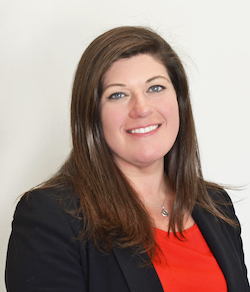 The opportunity to be self-operated gives you so much flexibility. You get to be intimate with the community, with the building, and you get to customize everything that you’re doing, and not just for that community in general on an annual basis. We have the mobility and the flexibility to do it on an event-by-event basis.

We can shift concepts. We can shift offerings. We can shift elements of the building to suit what is going on inside it, what guests are going to be attending, and what staff is hearing. We get feedback, and we can react, and that’s probably my favorite element about being in a self-operated building. We have the ability to access and tap into what feels good, and then execute on it right away.

If we hit a vein that doesn’t feel so good, or we think it’s great, and then in practice, it doesn’t execute at the level we were hoping for, or it’s not getting the kind of response we wanted, we don’t have to wait an extended period of time to make a change. We can make that change in-event or the next event. We can move so quickly to tweak what makes the most sense. That kind of control is incredible. And it’s right at the venue level.

Do you have previous experience with running and directing and in-house operation?

I do. I've been very fortunate in my career. I started in the sports and entertainment industry with a third-party company, a wonderful group to work with. It was amazing to understand that model, which is truly very common, especially when you’re dealing with NBA, NHL, large-scale venues.

There’s a lot of incredible things that come with being in a third-party-operated platform. Your focus is only on food and beverage. The vision originates at a corporate level, and it gets passed into its operators who then get a limited amount of ability to adjust it to the community, but really are entrusted to execute that vision and make sure it plays well in the market and the building they’re in.

“I thought I knew what the LA fan wanted. And then the circus rolled into town in Orange County.”

I had that experience in Los Angeles. I started out at the STAPLES Center, overseeing the premium operations and then was lucky enough to move into the overall director role for both the STAPLES Center and, at that time, the Nokia Theatre at L.A. LIVE.

I got to be in that environment, getting exposure to big markets and big buildings, lots of players helping to engage in the community-based offering from a corporate culture, with Levy Restaurants out of Chicago, a great company, supporting that process throughout.

I was with STAPLES Center for roughly six years in that third-party environment. Then I was tapped to move back to New York, where I’m originally from, and I was lucky enough to be the director of operations that opened the Barclays Center. So I got to work from that third-party model to open a venue.

It was while I was at the Barclays Center that I was tapped to go back to the west coast and got my first foray into self-operated food and beverage. The Honda Center was looking to make a change and take its food and beverage in-house after about 20 years of being in a third-party relationship.

It was a great opportunity to take what I learned from that third-party model, what I’d seen, what I’d liked, and quite frankly, what I felt could be improved in a self-operated world. 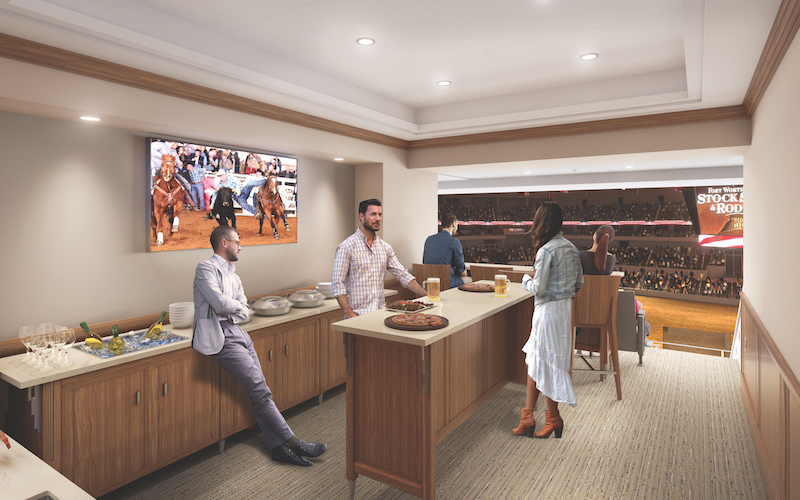 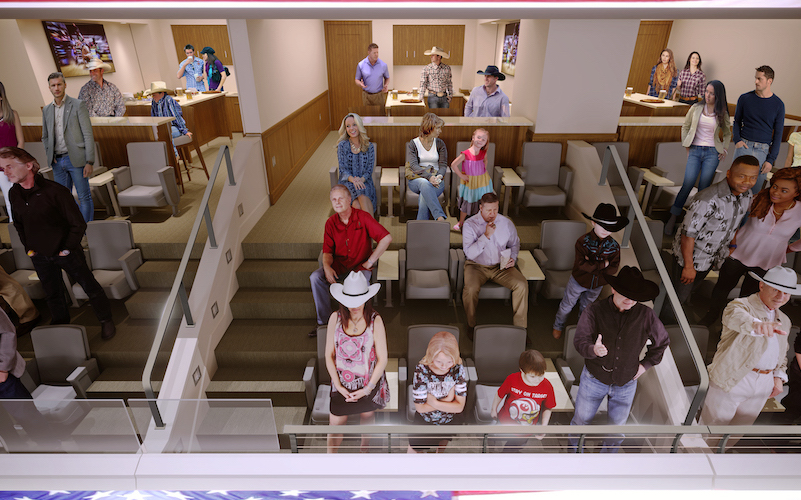 The self-operated mentality at Dickies Arena led to thoughtful suite elements, including islands strategically designed without chairs to inspire further engagement and tables between seats to create a heightened dining sense. Photos courtesy of Dickies Arena.

Are there any lessons learned from your experience at the Honda Center that are influencing your decisions here at Dickies Arena?

When Matt Homan and I first started talking, he was considering which way he wanted to pursue (third-party or in-house foodservice operations) for Dickies Arena. I said listen, we’ve learned because we’ve made big mistakes, and there are opportunities to learn from those mistakes to get better. Some of the biggest ones are learn your market and learn your people. And we did those things in those first few years of being self-operated [at the Honda Center].

I was fortunate. [Before joining the Honda Center], I spent six years [at STAPLES Center]. I ran the premium. Then I took over the whole building and then a concert venue. I thought I knew what the LA fan wanted. And then the circus rolled into town in Orange County.

We set ourselves up from a production standpoint, from an operational standpoint, all with the [assumption] that this is the LA fan market. Oh boy were we wrong. The Orange County market was completely different than LA.

“We were willing to say, let’s dream big. I want you to ask for the unicorn.”

In those first few performances, we thought we knew what to expect and then realized we didn’t. But when we needed to react quickly, we could. That was one of the biggest learnings – not everything is cookie cutter. You have to trust that the experience you’ve had is going to help you, but you can’t rest on those laurels. You need to do your homework. You need to be willing to experience it all again for the first time and tweak and adjust very specifically to where you are.

When you don’t have to keep some things consistent, you start thinking outside the box for every event and every group that might be coming into your venue. All of a sudden, you reap such great rewards, and you start to see deeper connections with your guests. You also see much more creativity and inspiration from your team.

Don’t just tap into one person for one thing. Talk about it, brainstorm, throw things against the wall that are absolutely insane and might cost more than you ever thought could be reasonable or approved, drill down into why they’re great ideas, and then approach.

Even my counterparts that had been in a self-operated component of the Honda Center for years would look at what we were doing and say, ‘why does food and beverage get to do those things?’ And the truth was that we were never not willing to ask. In another environment, it might have felt like that’ll never get approved, so let’s not waste time thinking about it. Let’s not consider it. We were willing to say, let’s dream big. I want you to ask for the unicorn.

Sometimes those [ideas] came with a lot of effort, some with big price tags. But being willing to not automatically think within the confines of financials, what’s been previously approved, or what's been previously done is why that self-op model is so exciting. If you throw those walls of caution out, you can get some great realities to come to the surface.

Read Part Two of our Member Highlight with Julie Margolin.

Watch our entire Dickies Arena video series, featuring a tour of the preview center and arena construction next door, all premium seat details, and food and beverage tips and insights from ALSD Member Julie Margolin.