She’s a homebody and a globetrotter. She’s an adventurous eater and a centered yogi. She’s a protector of the arts and in the business of making memories. She’s Laura Zimbrick, Corporate Partnership, Premium Seating Manager at the Fox Theatre Atlanta.
By Samuel Day, ALSD 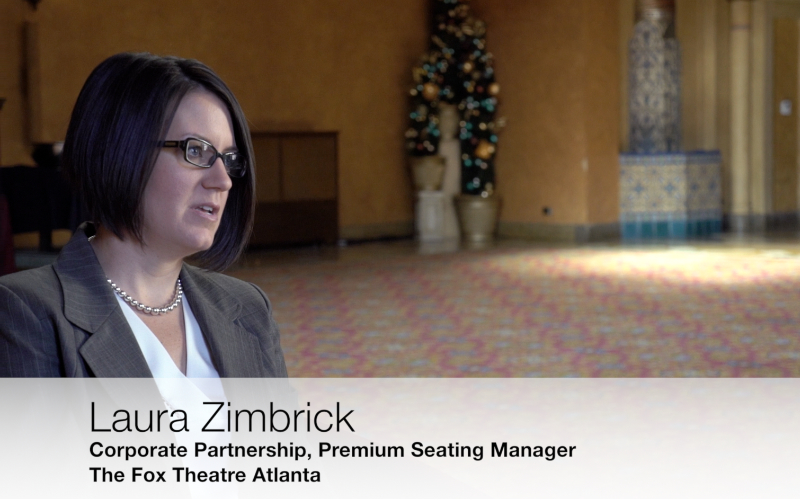 The following transcript excerpt has been lightly edited for clarity.

What first drew you to performing arts centers?

I’ve been coming to the theatre since I was a kid. My parents had the Les Misérables soundtrack on cassette. I played it so much I think I broke the tape. We were big fans growing up. I danced a little bit when I was a kid. I was in community theatre. I was the Cowardly Lion for The Wizard of Oz.

The ALSD has grown to encompass both sports and entertainment facilities. What can we learn from one another?

As it turns out, I don’t think we’re all that different. Granted, sports have cornered the corporate entertainment segment for decades now, but we’re coming. I will say that I was at an ALSD Conference a couple of years ago in San Francisco, and [San Francisco Giants CEO] Laurence Baer was there. He was one of the keynote speakers, and he said something that really struck a chord with me – we’re not competing with each other, with other venues, with other forms of entertainment. We’re competing with people’s free time. We’re competing with their couches.

And that’s something that all of us can learn from each other. We are the great protectors of live entertainment. We need to remember that there’s a reason that people pay really good money to come out, off of their couches, out of their houses, and into our seats. We need to protect that, and we need to allow it to thrive. So that’s one of those things where we need to keep track of each other – what’s going on in the industry, what are people doing, what do they want? The through-line, I think, for all these venues is customer service obviously, and safety is another big thing. We need to continue to keep that dialogue open between all the venues.

Can you take us through what the guest journey will be here at the Fox after the current renovation is complete?

One of the biggest things that we weren’t able to provide previously was taking ownership of the entire guest experience. Not so much from the time they scan their ticket to the time they walk through the doors at the end, and not even so much driveway-to-driveway. It’s awareness-to-reminiscence at this point.

So when a guest finds out about a show, if they’re a member of the club, they call up their dedicated ticket concierge, they secure their tickets to the performance, and then they reserve access to the Marquee Club. Fast-forward to the day of the show, about 90 minutes before the show starts, they park in their designated space. They walk into their private entry where they are greeted by name. And then, they walk into this golden oasis of absolute grandeur. It is the most beautiful part of the theatre, not detracting from it of course, but really paying homage to it.

A Golden Oasis of Absolute Grandeur