Milwaukee Comes of Age with Wisconsin Entertainment and Sports Center

The new home of the Bucks, as well as a full concert and family show calendar, brings top-flight entertainment inside and outside the venue walls.
By Jared Frank, ALSD 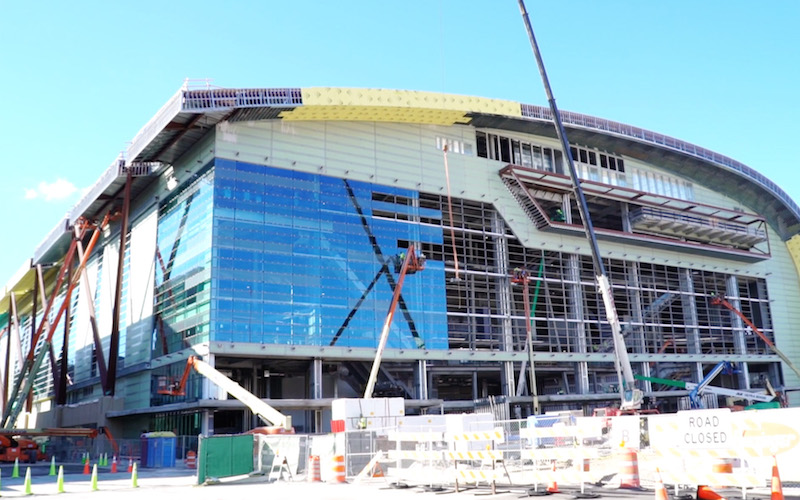 The past and future flank the BMO Harris Bradley Center in Milwaukee, Wisconsin. From south to north, starting at the corner of Kilbourn and Fourth Street, sits UW-Milwaukee Panther Arena (the original home of the Milwaukee Bucks), the aforementioned BMO Harris Bradley Center (the current Bucks home), and then the $524 million, 714,000-square-foot Wisconsin Entertainment and Sports Center (WESC), currently under construction.

“We joke that this is like our evolution of man, but with arenas,” says Brian Wolfe, Manager of Suite Sales for the Milwaukee Bucks.

The postmodern arena has reached its final stages of construction, the heavy equipment clearing out to make room for finishing details. In just seven months, WESC’s 17,400 seats will fill for a concert schedule that includes Maroon 5 and Justin Timberlake, bringing top acts to Milwaukee who might previously bypass the Cream City in favor of Chicago or Minneapolis because the BMO Harris Bradley Center only has one loading dock.

Seating experiences at all levels dramatically improve in WESC. Replacing the 6,000 lower bowl seats in the BMO Harris Bradley Center are the new build’s 10,000 seats close to the action, all angled with acoustics optimized for concerts, family shows, and, of course, NBA basketball.

“People in Wisconsin are typically very prideful and passionate about their space. That’s one thing our ownership wanted to do is maintain that Wisconsin pride and passion in the new arena.”

The first four rows of seating (approximately 550 total seats) will have all-inclusive access to the BMO Harris-sponsored courtside club on the event level. An additional 1,000 lower level club seats, known as the mezzanine club, will have their own club access.

Rounding out the premium seating at WESC are the lofts, a mid-tier product similar to theatre boxes. Thirty-three lofts, accommodating four to eight guests, perch on the east side of the suite level, priced at $90,000 to $175,000 per season.

“We have a variety of mixes of product for this [loft] space,” says Jed Justman, Senior Director of Premium Seating at the Bucks. “Where at the Bradley Center, we just have one specific configuration.”

The dynamics driving the design materials reflect the architectural and industrial history of Milwaukee, themes that extend all the way to the Bucks preview center for the new arena – complete with reclaimed Wisconsin barn wood and authentic Cream City bricks.

“One of the architects coined the term 'new authentic',” says Wolfe. “And that's the look and tone and feel of the space.”

A façade of zinc and glass wraps uniquely around WESC with additional design choices inspired by the scenic beauty found in the Upper Midwest. Natural landscape influences, both in material and form, express the exterior of the building as well as its interior volume, juxtaposed with technology features throughout the building.

“The shape of the arena, for instance the curve, represents the fact that we’re in lake country,” says Wolfe. “And the wood-like exterior represents the forestry of Wisconsin. Everything has a rhyme and reason and ties back to Wisconsin, and to Milwaukee specifically.”

“People in Wisconsin are typically very prideful and passionate about their space,” Justman adds. “That’s one thing our ownership wanted to do is maintain that Wisconsin pride and passion in the new arena.”

The steel and concrete and zinc and glass blooming out of downtown Milwaukee comes from much more than just an arena, which catalyzes a larger mixed-use district in the urban core.

“It took people a little bit longer to wrap their heads around the fact that we’re building a lot more than an arena,” says Wolfe. “We’re building an entire neighborhood.”

“It took people a little bit longer to wrap their heads around the fact that we’re building a lot more than an arena. We’re building an entire neighborhood.”

The 365-days-a-year entertainment district has become commonplace in recent years as an economic driver for organizations and municipalities to counterbalance rising development costs, for both private and public sectors.

In Milwaukee, mixed-use starts with a new team training facility and medical clinic, built in partnership with Froedtert & the Medical College of Wisconsin – a founding partner of the Bucks.

“That’s the first building that opened (July 2017) in this entire development,” Justman says. “It's already being utilized as the main training center for our players, and then there’s going to be a public medical clinic attached to that.”

In sum, the entertainment district in Milwaukee will bring a density of people downtown to work, live, and play at the doorstep of the new arena. Fourth Street, Sixth Street, State Street, and McKinley Avenue outline the district boundaries, connecting on each side to active development of apartments, retail, beer gardens, restaurants, and bars.

Fourth Street will be closed to traffic, allowing it to host outdoor events on non-gamedays, such as farmers markets, concerts, even three-on-three basketball tournaments.

Just across the street from WESC sits a new parking structure, connected to the arena by a skyway, that provides all premium seat holders with the best parking in the development.

“They could leave their coats in their cars during the cold winter months, walk across that skyway, and virtually have a private entrance to the arena,” says Justman.

Cognizant that parking is a fan’s first and last impression, the Bucks carefully designed the $35 million, six-level parking deck to provide efficiency, great experiences, and unique features. Gates are located on the second level to alleviate congestion at street level, while the top level provides the potential for tailgating and fan experiences outside the venue walls. Final decisions for entertainment on the top level will be made after traffic flows are analyzed upon the building and neighborhood opening to its new, modern age.

“All in all, the project is over a billion dollars,” says Wolfe. “It’s 30 acres, and the arena is just seven acres. So when you look at the totality of everything, it is truly more than just a new basketball arena for the Bucks.”