The three-phase, $360 million renovation of Bankers Life Fieldhouse, home of the Indiana Pacers, injects three new premium environments, new amenities on the main and mezzanine levels, as well as a new arrival experience with year-round activation.
By Adam Stover, Populous 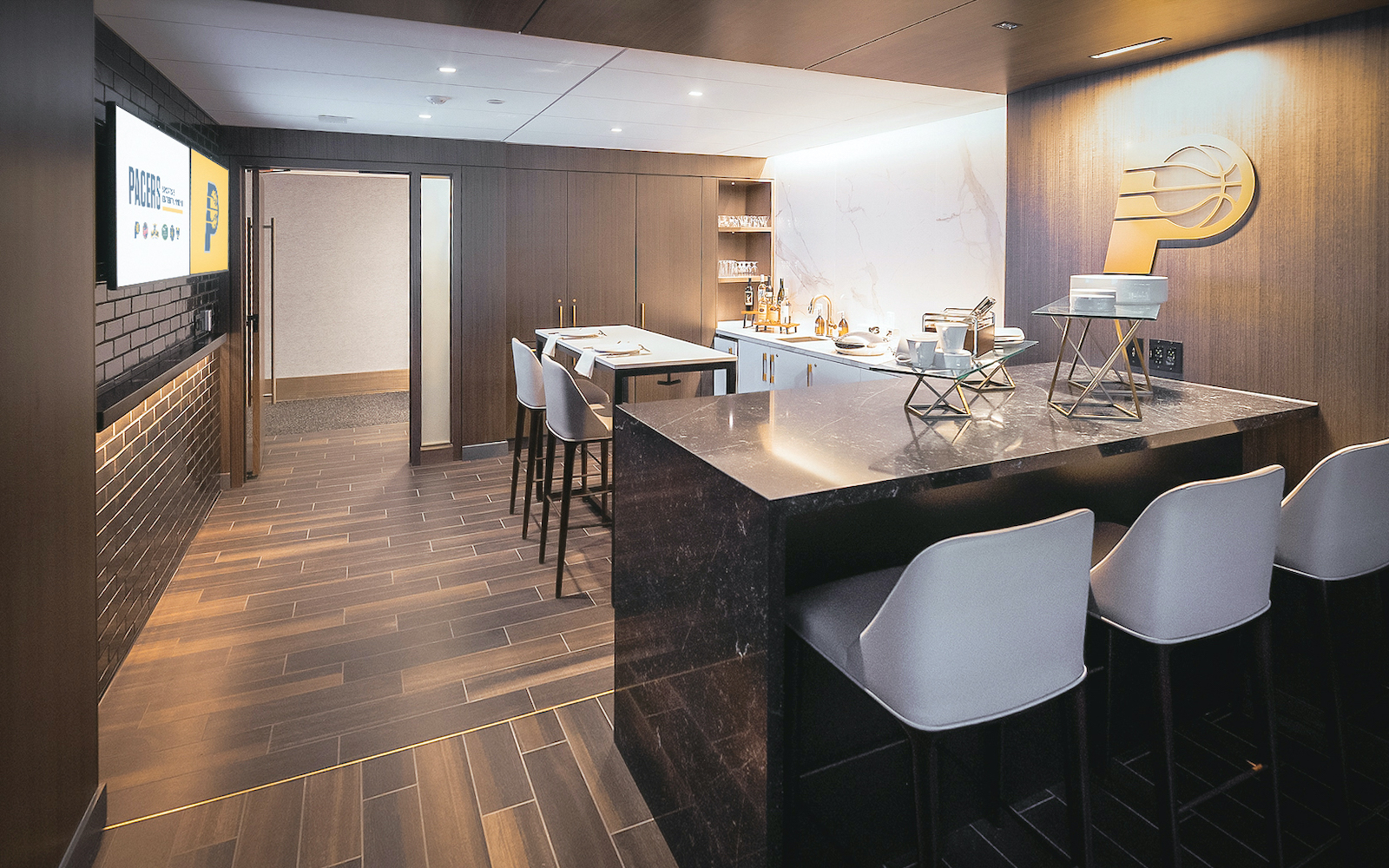 The sports and entertainment landscape that greeted Bankers Life Fieldhouse when it opened in 1999 would be almost unrecognizable today. It was the closing chapter of the NBA’s Jordan era, and like the baggy basketball shorts of the time, arenas operated under a one-size-fits-all mentality.

For the everyday fan, a sea of cheap seats awaited in the upper bowl. For the VIP crowd, a surplus of suites circled the seating bowl.

The business model worked well, but a seismic shift in fan preferences was on the horizon. A shift spearheaded by social media, by the league’s increasingly diverse clientele, and by market forces that rewarded the flexibility to choose one’s own adventure.

Fast forward to present day and Bankers Life Fieldhouse finds itself in the midst of a three-phase, $360 million transformation – an expansive renovation that fully sees these trendlines to fruition. The iconic basketball venue has always had good bones and even better sightlines, widely recognized across the industry as one of the best places to watch an NBA game.

To become the fieldhouse of the future, however, it would need to continue to evolve and create experiences inside experiences that resonate with today’s sophisticated sports fan.

On that front, new social spaces are coming soon inside and out, as well as catering to fans of all stripes. A new outdoor plaza, which will boast a basketball court in the summer and an ice skating rink in the winter for year-round activity, will feature public art and green spaces while paying tribute to Indianapolis’ Bicentennial, history, and racial diversity.

Inside, a mix of new spots sprinkled throughout the concourses and seating bowl will let all ticket holders socialize and stretch their legs without missing a minute of the action on the court.

First, however, comes a complete overhaul of the arena’s premium offerings. Three new hospitality environments will be among the first work to flicker online this winter. They follow the same playbook – serve up a little something for everyone.

Five years ago, the fieldhouse’s premium portfolio expanded to include a renovated event level courtside club and suite level loge club. The spaces were a hit and whetted fans’ appetites for more VIP experiences. So in addition to redesigning the lower suite level, phase one of the current renovation introduces two new event level clubs – the 67 Club and the PointsBet Hardwood Club – along with an updated Courtside Club that together carry the hospitality torch further with differing upscale vibes.

The highest level of finish and detail distinguishes the Courtside Club design.

Courtside seats, close enough to hear the ball swish through the net, tend to attract the most discerning of VIP clientele. The Courtside Club caters to this crowd with all-inclusive hospitality – everything from live chef demonstrations to exclusive memorabilia displays from the team’s vault. The club’s design features the highest level of material finish, including a custom acoustic coffer ceiling, stone mosaics at the central bar, and a bespoke brass TV and liquor display.

Located just beyond the court’s north baseline, it sits in the same footprint as the original 1999 space that serviced about 1,200 fans. With many of those ticket holders now spread out among two additional spaces, the new Courtside Club feels more spacious with plenty of room to relax in luxury before, during, and after games.

The original floor from the Pacers’ previous home arena adorns the wall of the PointsBet Hardwood Club. 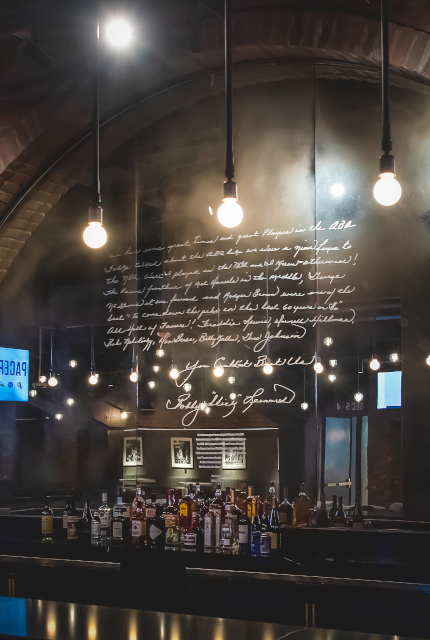 The other new hospitality spaces reside on opposite sides of the court, each with a unique atmosphere and ambiance. Making space for them wasn’t easy. It required a substantial reshuffling of the building’s programming, including moving the fieldhouse’s practice court up a level. The result is a rarity for older arenas – the introduction of extra premium inventory.

To the east, there’s the 67 Club, which draws its name from the year the Pacers established themselves as members of the American Basketball Association. The design takes club members back to when it all began, using textures like antique brick which harkens back to the Pacers’ first home, Indiana State Fairgrounds Coliseum. In terms of game action, the club comes with seats on the players’ side of the court, letting members peer into huddles as plays are drawn up.

Hidden beneath the bowl along the west sideline is the PointsBet Hardwood Club, a space loaded with both tradition and tech. A prime example of this combo is 318 square feet of LED wall display framed by the original floor from the Pacers’ previous home, Market Square Arena.

The club’s walls also pay homage to the scores of historic high school gymnasiums so emblematic of Indiana’s rich basketball tradition. The Pacers tracked down photography for many of them, from the court featured in the film Hoosiers to the country’s largest high school gym located just an hour outside of Indy. When club members aren’t soaking up basketball history lessons, they’ll be enjoying cross-court views of the team benches and seeing coaches and players react in real time to gameplay.

Taken altogether, this new premium inventory gives the Pacers a leg up in the post-pandemic landscape. Even as the team determined when to safely bring the general public back for NBA games, the Pacers have turned a quiet period into a positive. Not only do they have something new to talk about, they have a facility schedule that’s wide open to host safe and socially-distanced tours of the clubs for prospective premium clients.

A new scoreboard debuted as part of phase 1 enhancements.

At a time when everyone is feeling virtual fatigue, the importance of these in-person interactions can’t be overstated. The tours provide a launch pad for new relationships as well as a way to strengthen existing ones.

Todd Taylor, the team’s Chief Sales and Marketing Officer, can point directly to one of the bowl’s new platforms, for example, and show a long-time season ticket holder both why their old seat is shifting and why their new one is even better.

The team’s sales group, meanwhile, has innovated its usual approach to premium pricing to better appeal to clients who might be tempted to wait and see how the pandemic shakes out. Instead of getting treated to sticker shock now, prospective suite and club members can commit long-term at a lower up-front rate. Their commitment then gradually steps up each season to pre-pandemic pricing as more amenities come online and club capacity increases.

Opening Up the Concourse and
Pushing the Exterior Envelope

While fans will first savor the new event level premium experiences, two more summers of construction will further transform the fieldhouse. At the end of phase two, new amenities will debut on the main and mezzanine levels. In addition to new seats and renovated bathrooms, the bowl has been punched open to connect the concourse to game action and create vibrant standing social spaces. Concourses will also get the VIP treatment, with inspired food and beverage offerings to go along with court sightlines.

At the end of phase three, the arrival sequence outside will look radically different as well. The site’s footprint is expanding north. Gone will be a parking garage – to be demolished this spring – and in its place will be a new sunken plaza activated year-round with ice skating, outdoor hoops, and more. The community gathering place will take on special significance as Indianapolis celebrates its bicentennial. Faces of leaders of all backgrounds and industries who helped build the city will adorn a wall mural overlooking the space.

The Fieldhouse of the Future:
Coming Soon and Coming for All

The idea that experiences at every angle can be created for every guest best defines the Bankers Life Fieldhouse project, the biggest infrastructure upgrade currently being undertaken by a city and NBA franchise. The Indiana Pacers, after all, belong to the entire state. Basketball is its birthright, and the Circle City has been the site of so much hardwood history. Since opening in 1999, the fieldhouse has helped infuse the city with energy, marked its skyline, and been the heartbeat of its downtown.

Our job as designers is to first and foremost understand this community context. Working on a cherished public asset comes with extra responsibility, especially when bringing it into a new era. That’s difficult to do even in normal times, let alone during a global pandemic that has left so much up in the air.

Together with our partners at the Pacers, however, we haven’t wavered from this human-centered approach to placemaking. After three summers of construction, once the hardhats are finally put away, Bankers Life Fieldhouse will secure its status as a bucket list destination for hoops fans well into the future.