My Conversation with Michael McCullough 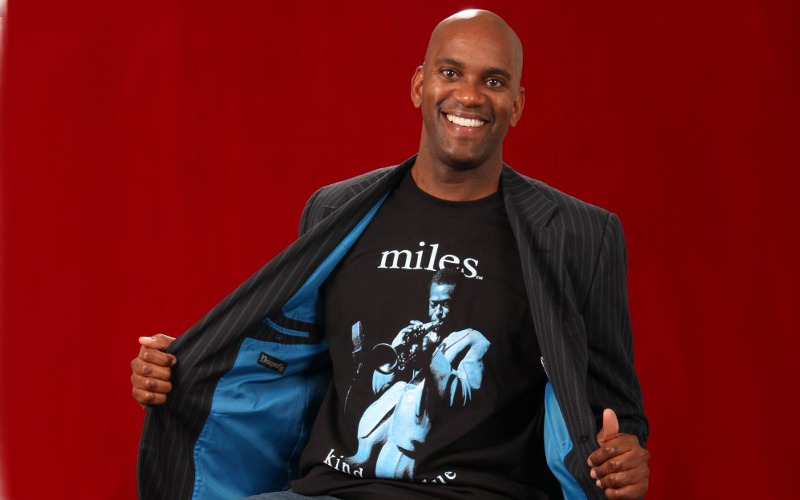 The Executive Vice President and Chief Marketing Officer of the Miami Heat discusses the team’s new mobile app and business intelligence opportunities, how to have a one-to-one conversation with 22 million social media fans and followers, what it’s like to design a championship ring with Pat Riley, and of course, his famous wall of records.

I have to start with the obvious. Tell me about the record collection behind you.

I’m a huge record guy, have been since I was a little kid. My dad got me hooked on music when I was young.

How is all of your vinyl organized?

It’s not. They’re just a mess. I pull a few of them out [of the overall collection] every two or three weeks and change the theme [on the wall behind the desk]. So there is a theme here. They’re not just thrown up here. It’s a puzzle to figure out the theme. Sometimes it’s easy, sometimes it’s hard. I think this one is pretty easy.

(Don’t let Michael fool you. I’m told from a few little birdies on the inside that his record themes are quite difficult to decipher.)

I’m going to have to admit that I have no idea what the theme is. I can’t figure it out.

[Laughing] Well I’m not going to tell you.

Is there a turntable in here?

Oh yeah, right behind you. I’ve got one at home too.

Did you grow up playing music, or just listening?

I was part of this collective in college. We would throw dances all the time. I was the weakest DJ, but I was a college basketball player, so I could draw the people. My friends were much better technicians than I was, but there was no party without me.

Where did you go to school?

You definitely do have some length. What position did you play?

So that must mean you played in the short shorts era?

I can’t even get those shorts on anymore.

Speaking of uniforms, on the retail side, the Heat have been recognized as the top retailer in the NBA on multiple occasions. To what do you attribute those achievements?

The best thing is we have Andy Montero, who is easily the best retailer in this business. What ties everything together is that retail reports to marketing. For a lot of other teams, retail, because it is a physical structure, reports to the arena. And that’s ok, but being tied into what we’re doing on a daily basis allows it to mesh with marketing. We don’t make a decision without thinking about how it will help move the needle at retail.

You’ve also helped design the team’s three championship rings. How did it feel to win and design that first ring in 2006?

We went on an amazing run that year. No one thought we were really going to get there. After we won the championship in Dallas, we rushed back and planned the parade. And the day after the parade, everyone was just wiped out.

I was here in the office cleaning up some paperwork, and the phone rings. I see from the display that it’s Pat Riley. I was worried that something went wrong at the parade, and he was going to tell me about it. So I walked over to his office, which is completely intimidating. It’s completely dark with one lamp. I was so nervous that I didn’t pay attention to what was on his desk.

So Pat calls me over and says how appreciative he is for everything I’ve done for the team, for my sense of style and sense of fashion, and that he wanted me to help him design the championship ring. He pulls back this curtain on his desk, and he has all these rings from Super Bowls, from the World Series, his own NBA rings. His entire desk was covered with rings. And literally for three hours, just him and I, we went through all of them and started sketching out our ring. And that sketch ended up being the 2006 championship ring. I also got to design the rings in ’12 and ’13 as well. It’s the coolest thing ever. I never thought I’d be in a position to do something like that.

Here in Miami, what are the core values that you adhere to when putting together a marketing campaign?

What we try to do here is be fully immersive. We want to be immersed in the fabric of this community. The first thing I did when I got here in 1997 was I went out to meet people to see what their opinions were of us. At the time, it was a football town.

We needed to make a change. We needed to build a relationship with the basketball guys, because there was none. My first marketing campaign that I ever created for the Heat is a perfect example. I was going to pitch it to Pat [Riley], and this is way before he’s calling me over to design rings. At the time, we were in two separate buildings, so I had to communicate with Pat via fax. So I faxed him my marketing plan that I spent a lot of time on. It was like 15 pages. Before I even get back to my office, I get a return fax from Pat, and all that he had written was “N-O”, and faxed it back.

We had our work cut out for us to create a relationship with those guys. Next thing you know, our players are pumping gas at the gas station, they’re riding on public transportation with the morning commuters, and they’re in the toll booths that people pay at as they’re going through the toll plazas, all that kind of stuff. Slowly but surely, the needle started moving, and people started talking about us. And as the team got better, the story grew. When we had Shaquille O’Neal and Dwyane Wade, we were still doing those grassroots kinds of things to build relationships with our fans.

More broadly speaking, what does the future of sports marketing look like?

Clearly, social media is huge. We’re at 22 million [social media followers] strong, the third highest in all of professional sports in North America. It’s a huge part of what we do. My instruction to our social media people is to try as often as possible to have a two-way conversation. Talk to people.

You can’t talk to everyone. But when you have one conversation with somebody, you’re really reaffirming for all those other people who will never hear us why they’re following the Heat.

Here’s an example. We introduced a clothing line of “Moments” that capture singular moments in our history, like the Ray Allen shot [in the 2013 NBA Finals]. When we introduced the first line of shirts, a bunch of fans tweeted in what their favorite moments were. I told our folks to pick ten of [the fan favorite moments] and make that shirt, and then send it to him or send it to her. It wasn’t one that we created for the merchandise line. That fan was the only one to have that shirt. It was their shirt.

And what does your future marketing activity look like in the building?

In the building, we have our new mobile app. It’s so different from all other apps. We spent a lot of time and effort to create an everyday app. What our app is not is something that you have to open up only when you’re going to a game. It’s a lifestyle app. We have 20,000 fans in the arena for a game, but we have 22 million fans out there who will never step foot inside the arena. So we have to program the app to speak to all of them.

Did you develop that stream in-house, or did you work with a partner?

We create all the content right here. We created the app with SapientNitro. They were equipped to do what we wanted to do with this, not only from a content standpoint, but also from a monetization standpoint. We are looking for this to be a significant revenue driver for us. We are already seeing an increase in purchases on the app with mobile wallet, $3 higher than purchases made with cash or credit card. And we’re also already seeing our sponsorship revenue go up, which is really where we’re going to make our money on the app.

And with the way we built it, if you’re another team and you like this technology, we can plug you in with your information, so there is a third potential revenue stream for us by allowing other teams to license and utilize this technology.

So the digital portion of our business is strong. We’re very bullish on our app.

Staying in the venue, can you use the app to push notifications to fans and track their behaviors?

We can. Now with the app, we have an incredible amount of rich data, such as mobile wallet transaction amounts, we have all the screen views on the app, the time spent on each screen, we have up to the minute exactly what a user did and where he or she did it. So everything from what was purchased, where it was purchased, literally minute by minute.

As we develop more and more of these data points, we’re going to be able to analyze things and make decisions on moving this food stand over there or incentivizing Mr. X to go get something else along the way to his preferred food stand.

We now know how fans are moving about the building, what they’re buying, what they like, what they don’t like. It’s a brave new world of information.

Based on this business intelligence, have you tweaked your programming to create the most ideal concourse, in terms of location and quantity of each offering?

Not yet, but only because it hasn’t been operational long enough. We just launched the app at the beginning of this season. We’re already over 100,000 active users. So we will definitely do that, but we want to make sure that we have enough data before we start moving things around.

Well I guess I’m out of questions, and I’m a little embarrassed. I still haven’t figured out the meaning of those records behind you.

For more on the Miami Heat, ALSD members can login and turn to page 36 of the spring issue of SEAT Magazine for coverage of the new Xfinity East Plaza, which cut its ribbon earlier this quarter at AmericanAirlines Arena.