The Nashville Predators march to the beat of their own drum in Music City.

In an arena marketplace that has witnessed multiple renovations of significant scale in recent years, Bridgestone Arena deploys an alternative strategy. As many buildings approach and eclipse 25 years of age, they are receiving financial injections of hundreds of millions of dollars. The Atlanta Hawks invested $192.5 million into 20-year-old State Farm Arena in 2018. The Cleveland Cavaliers poured $185 million into transforming 25-year-old Rocket Mortgage FieldHouse this year. Twenty-three-year-old Wells Fargo Center is in the midst of a three-phase, $250 million renovation. Just to name a few.

But instead of following this trend of the all-and-sundry, all-at-once renovation, the Predators make consistent improvements completed in annual increments, with $80 million in total spent in the past several years. And more is on the way.

That’s in addition to work already completed. Of the $80 million aggregate, the Predators put $8 million into the 23-year-old building in 2019, highlighted by a new nightly premium rental space and center-hung video board.

Hap & Harry’s Taproom, a new party suite on the Gary Force Acura Club Level, originated from a dearth of hospitality space at Bridgestone Arena capable of hosting large premium groups. The only solution for groups of 40-plus guests desiring a one-night rental was to purchase two traditional suites located next to one another and try to combine them.

“Even then, it’s clunky,” says Chris Junghans, EVP and Chief Revenue Officer for the Predators. “There’s no connectivity. You’re in one space, and your colleagues are really in another. It just didn’t work. People that wanted premium groups with connectivity, where they could own a space, we just didn’t have it.”

To sand away these rough edges, the Predators earmarked $1 million to flip an underperforming concession stand in a premier location (front of stage) into a premier per-event group rental.

“We never had a product that really could cater to a large corporate event of 40, 50, 60 people in a comfortable premium environment.”

“Hap & Harry’s [Taproom] is really a result of a need that we couldn’t fulfill previously,” says Chris Burton, Senior Director of Premium Sales for the Predators. “We never had a product that really could cater to a large corporate event of 40, 50, 60 people in a comfortable premium environment.”

Its décor is luxurious, but not in an overstated way, allowing the space to flex to a broad swath of company sizes and tastes.

“I could envision small companies taking it over and having a holiday party here or celebrating an anniversary or some sort of work accomplishment,” says Junghans. “But the need for why we built it was Fortune 100, Fortune 50 companies that we just couldn’t service here.”

The Predators have migrated all premium rentals to all-inclusive experiences. Hap & Harry’s Taproom is a product with unlimited food and beverage located front of stage for concerts, while also offering desired sightlines for hockey games as well as all 135 ticketed events each year at Bridgestone Arena.

“It gives us a complete turnkey product with full buffet, full bar with beer, wine, spirits included, and a personal, private bartender throughout the event,” says Burton. “The sky’s the limit for how companies can use it throughout the year, and we’re excited to see what comes from it. We now have something for every type of entertaining style.”

A variety a building upgrades have been implemented in recent years beyond the premium levels as well, notably on the audio-visual side of the game presentation.

As part of a ten-year capital improvement plan, Bridgestone Arena has undergone a full AV renovation, including installation of a new control room, new LED ribbon boards, a new sound system, and an upgraded LED lighting system, culminating in 2019 with a new center-hung video board.

“The way you’re going to renew these clients and keep them involved is to provide them with unmatched and unparalleled service.”

Dubbed “FangVision”, the new center-hung and its more than 4.2 million LED pixels is nearly 300% larger with 450% higher resolution than its predecessor. It features underbelly boards to provide those fans in the first 20 rows with enhanced views of statistics and replays.

And for the enjoyment of all fans, four custom fang-shaped boards provide unique content and sponsorship opportunities at each corner of the 55,000-pound board.

The Predators have also added more boards on the exterior of Bridgestone Arena to add value to existing corporate partners and promote the venue’s upcoming events to passersby along Nashville’s famous drag of neon lights along Broadway. Already the beneficiary of heavy foot traffic due to its close proximity to Nashville icons, such as the famous honky-tonk Tootsie’s and the historic Ryman Auditorium, Bridgestone Arena is in prime position to ride the wave of Broadway’s continued growth.

“Broadway is now extending past Fifth Avenue,” Junghans says. “We’re going to be right in the heart of it.”

“Our connection to the city, to Broadway, to the entertainment district is who we are and bringing that into the building is what we do,” Burton adds. “This building is fantastic for who we are and having the ability to constantly improve it and bring it more to life every day is a great opportunity.” 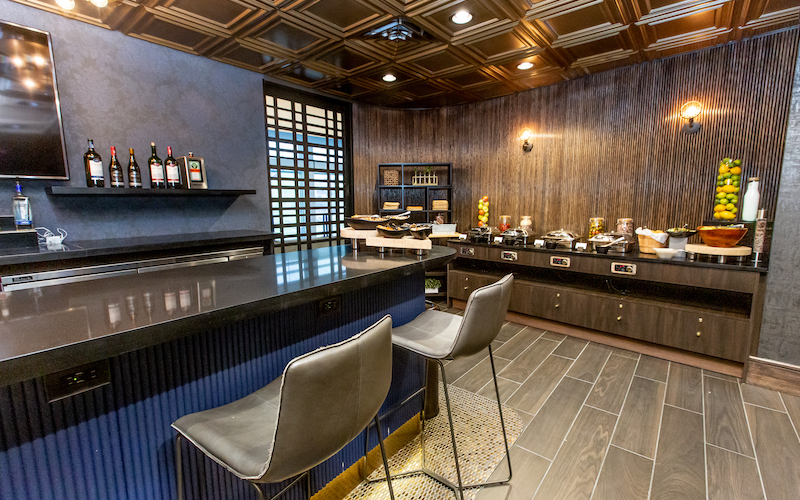 Hap & Harry’s Taproom provides Bridgestone Arena patrons with unlimited food and beverages, including beer, wine, and select spirits, in addition to a private bartender for the duration of events. Photo courtesy of the Nashville Predators.

In coordination with the multitude of physical enhancements made by the Predators, the organization has also augmented its service initiatives and staffing, having beefed up its service team by over 100% in just the past two years.

“The way you’re going to renew these clients and keep them involved is to provide them with unmatched and unparalleled service,” says Junghans. “We care about every fan that comes through here.”

No matter if those fans come to Bridgestone Arena to sit in the premium or general seating levels, for a hockey game or a concert, they can expect the experience and spirit branded as “Smashville” to remain among the industry’s best in a city not just known for music, but for having high expectations for anything cut from the creative cloth.

“The overall game experience has such a high reputation,” Burton says. “We can’t let that fall off.”

It’s a beat that goes on in Music City, one renovation at a time.

Visit the entire premium mix at Bridgestone Arena that offers hospitality for every entertainment style.