The new home of the Lions offers suites ten rows from the pitch, North America’s first safe standing supporter section, and a 33-degree rake producing unmatched sightlines for all fans.
By Jennifer Juergens 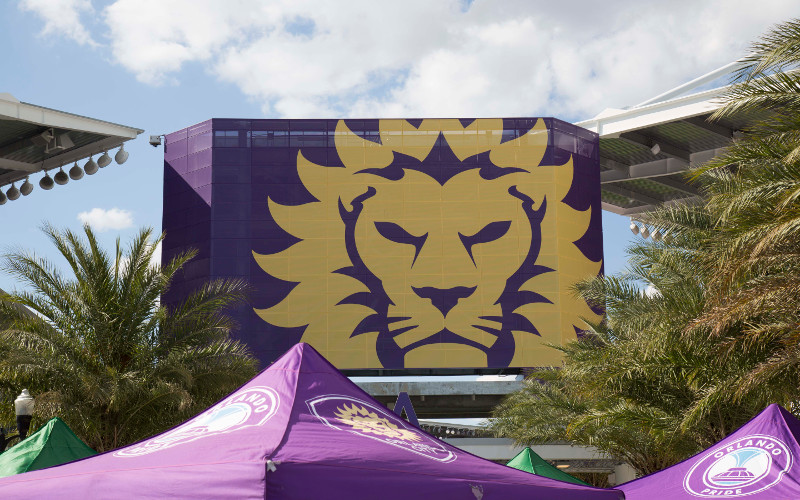 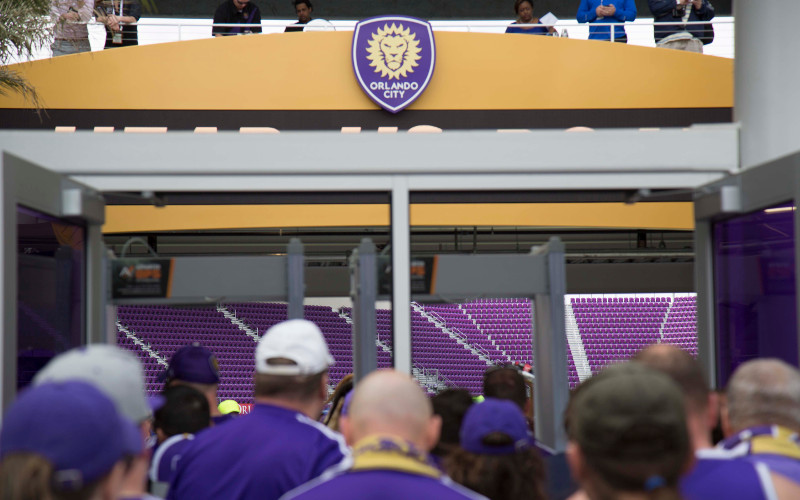 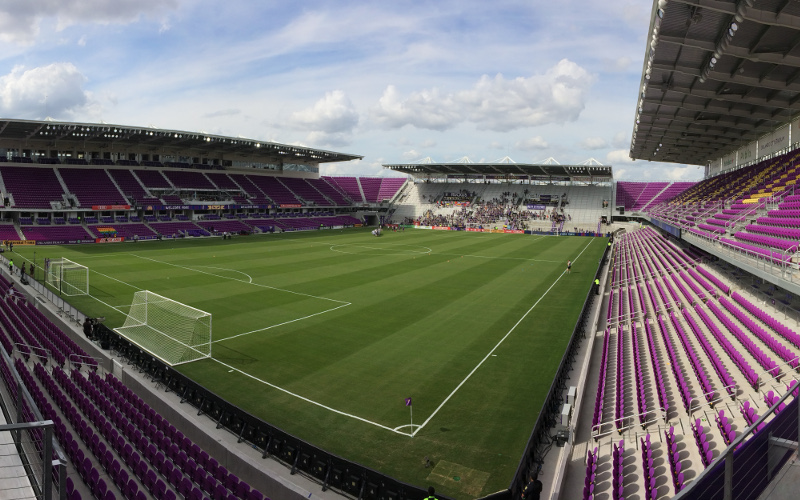 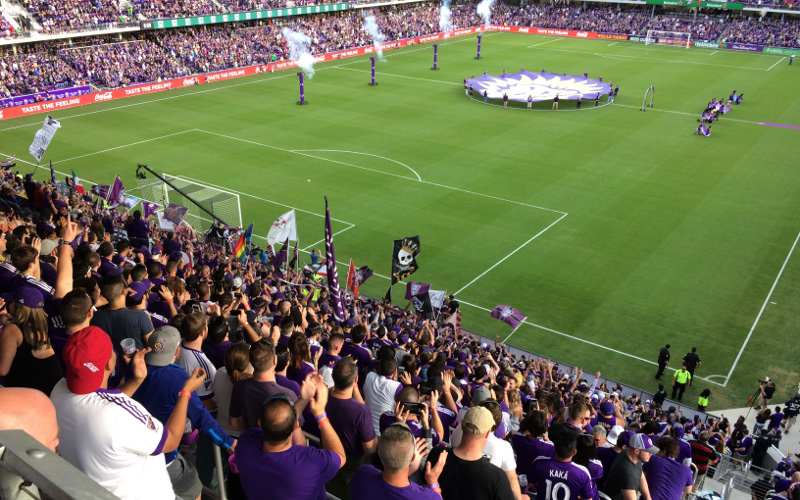 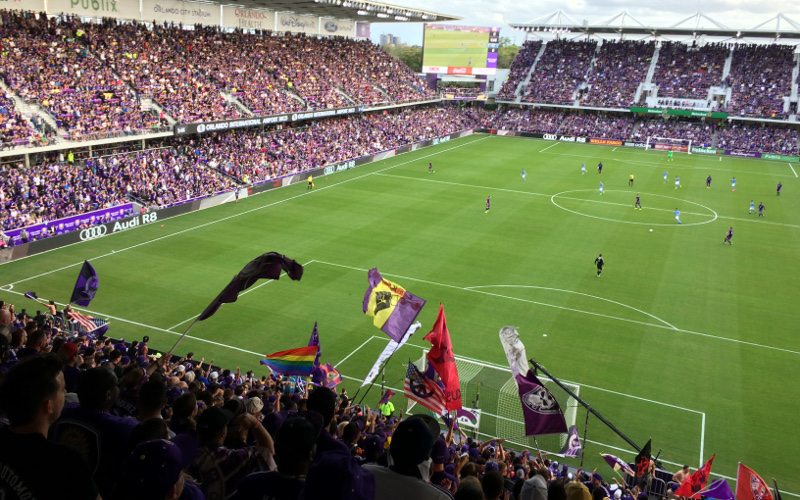 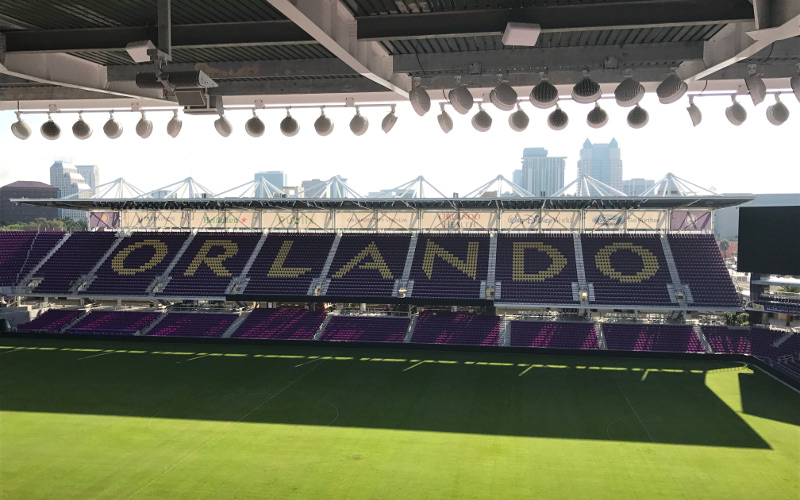 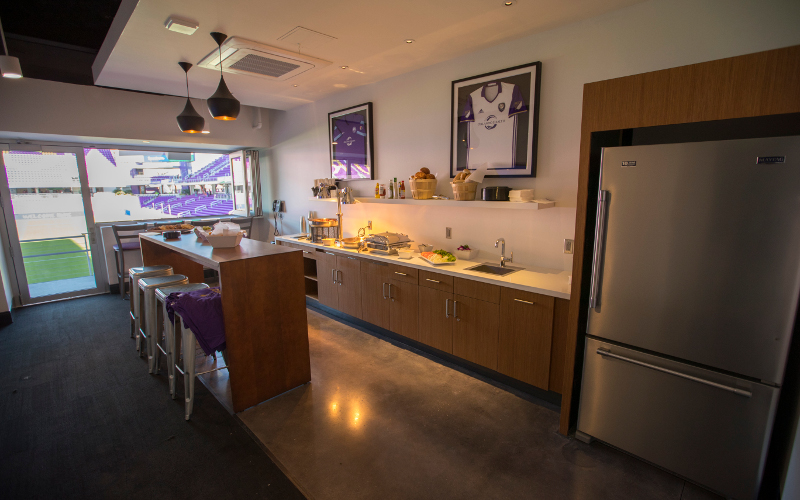 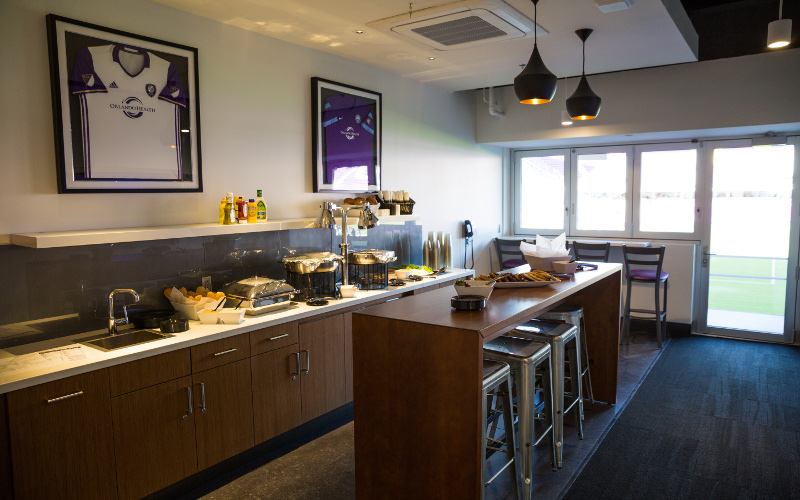 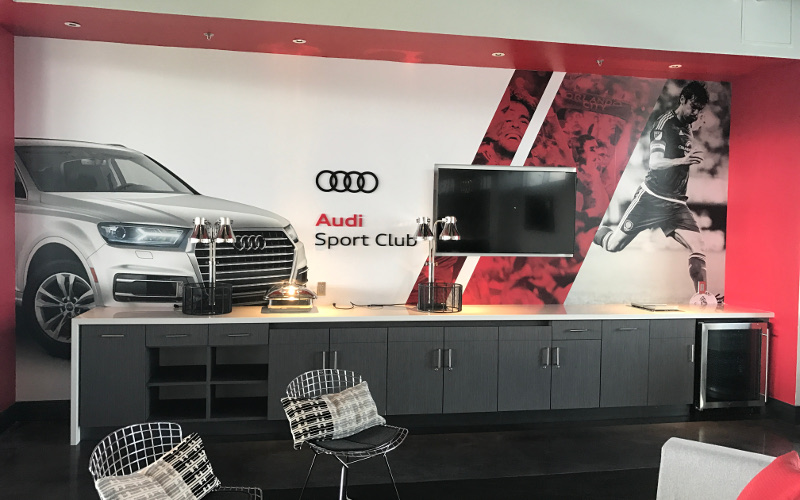 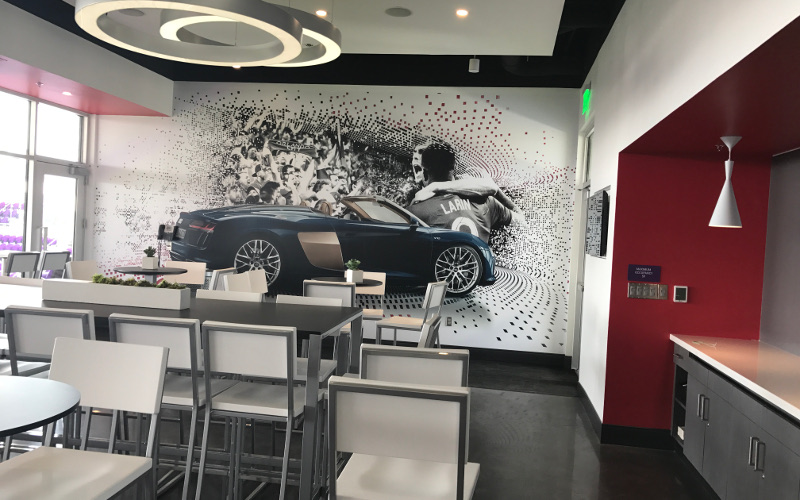 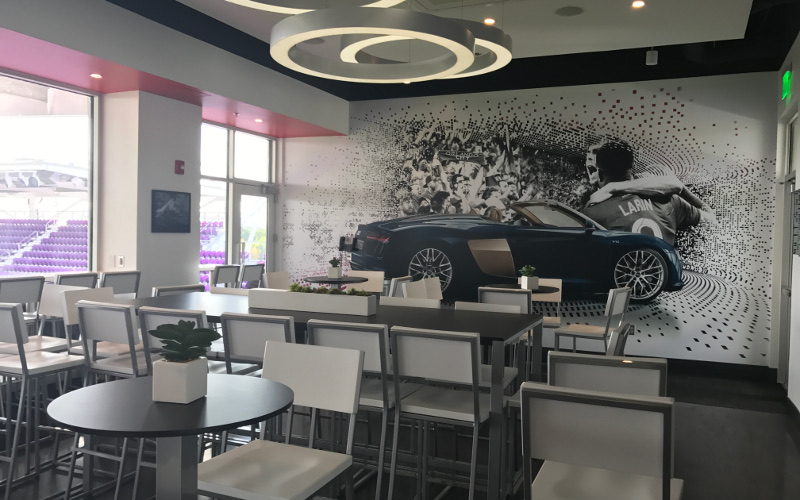 On March 5th, the new Orlando City Stadium opened to a sold-out crowd after more than two years of anticipation. Flashback to October 17, 2014 when owners, players, and local civic leaders led thousands of fans on a march from Church Street Station to the celebrated groundbreaking at the stadium’s site. Festivities included a local high school marching band, 24 tons of purple sand trucked in for the event with souvenir cans, and uniquely designed purple shovels.

The home opener was just as exciting as thousands of enthusiastic purple-clad fans marched into the new stadium this time. Built for 25,500 fans, Orlando City Stadium is home to Orlando City of Major League Soccer (MLS), Orlando Pride of the National Women’s Soccer League (NWSL), and Orlando City B of the United Soccer League (USL).

With a seating rake of more than 33 degrees, the $155 million Orlando City Stadium’s two-tier design gives fans prime viewing from every seat, presenting one of the most thrilling atmospheres in sports. The overhead canopies shield visitors from the Florida sun and magnify the stadium’s sound, all adding energy and excitement to an already dynamic atmosphere.

“Fan’s proximity to the pitch, highlighted by the first safe standing supporter section in North America, is unrivaled and helps create an avalanche of noise for opponents to reckon with,” says Bruce Miller, Senior Principal at Populous, the Kansas City-based architectural firm responsible for the stadium’s design, branding, graphics, and interior layout. 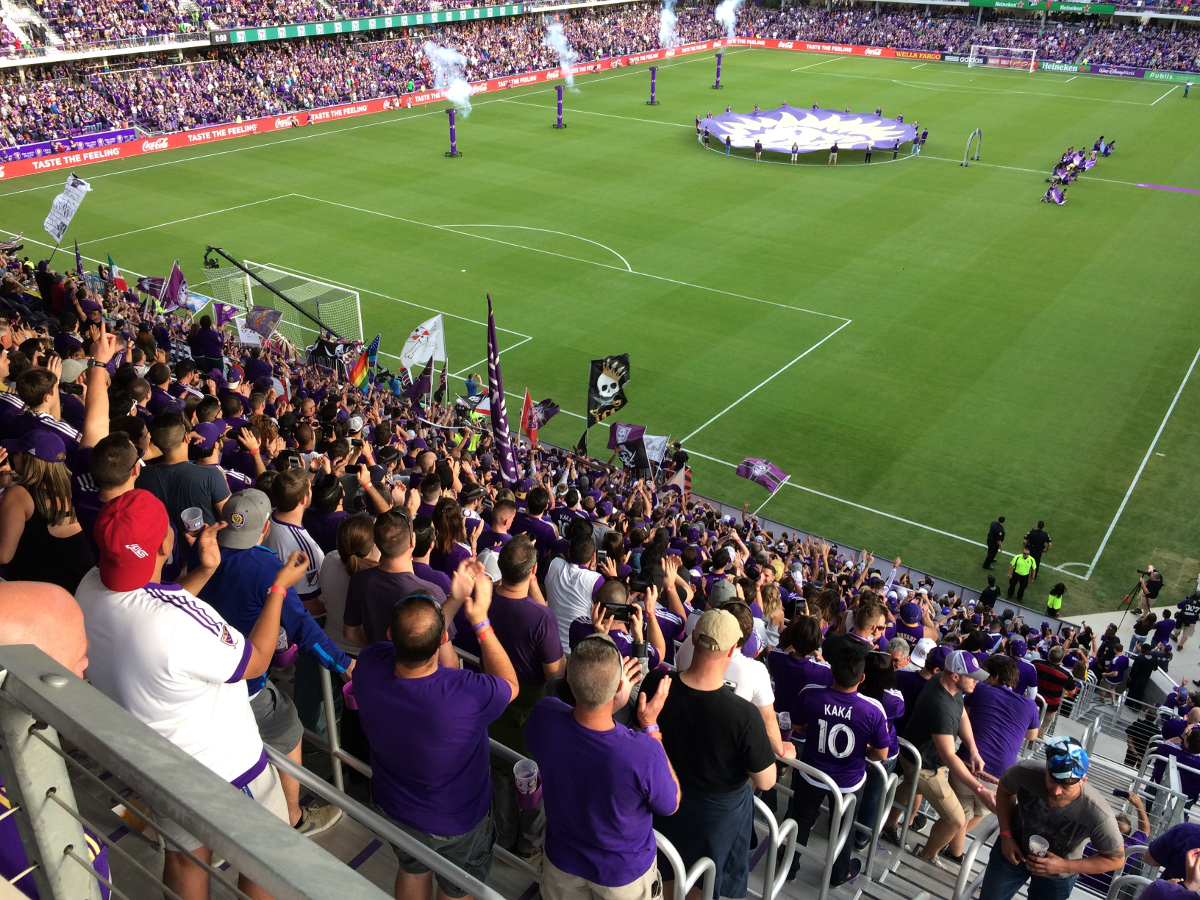 A View to a Thrill: Charlie Thornton, EVP at ICON Venue Group, describes Orlando City Stadium’s more than 33-degree rake and exhilarating sightlines to the pitch: “Fans are as close to the action as they can possibly be.”

In keeping with soccer viewing traditions, Miller’s firm wanted to provide a safe, noisy, and exciting area for those fans who want to stand while cheering on their team.

The stadium's original design for 18,000 quickly expanded to 25,500 seats, when the Lions averaged 32,000 fans per game at the Citrus Bowl, almost double initial projections.

“The team was doing so well [at the Citrus Bowl] they wanted to implement the expansion plan,” Miller says. “After the first season, they knew they’d have a strong enough market to support it.” 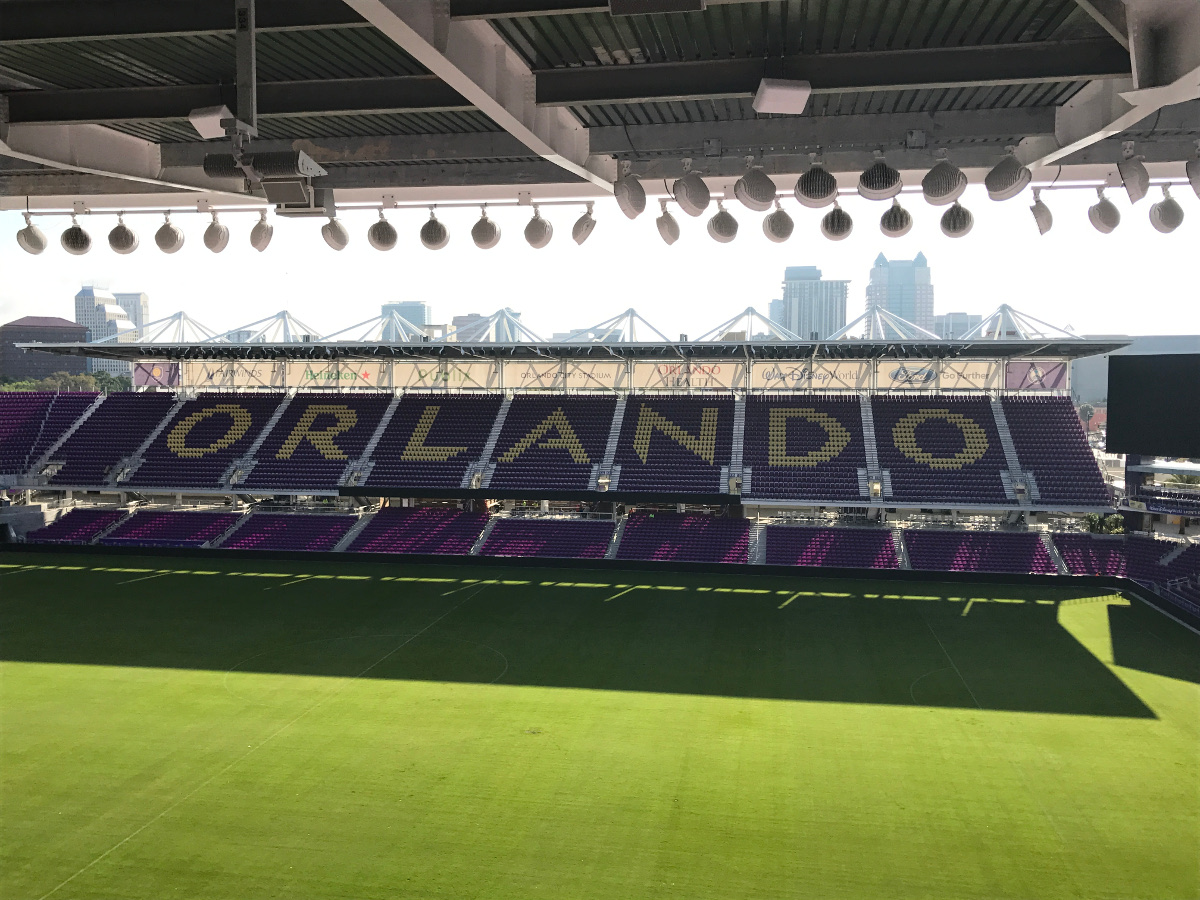 Uniquely Orlando: Orlando City Stadium is made of materials mimicking native limestone and traditional stucco, features an open trellis, and is heavily planted with flowerbeds and palm trees.

In 2014, Phil Kolbo, Senior Associate at Populous, worked with “parametric design”, a process that automates an architect's calculations in stadium designs.

“It works well for stadium design for the simple reason that math guides so many of the decisions around sightlines,” Miller says. “The owners wanted to give fans the best view of the action, so we knew we had to get the sightlines right. Formulas are what decide whether you see Kaká’s brilliant bicycle kick in all its glory or the head of the gentleman seated in front of you.”

“We also wanted it to be a building unique to Florida, sort of a pavilion in the park… We used white steel because of the sun. It really glows.”

Miller continues, “We also wanted it to be a building unique to Florida, sort of a pavilion in the park. It features an open trellis and is heavily planted with flowerbeds and palm trees. We used white steel because of the sun. It really glows.”

The building is made of materials meant to look like native limestone and the more traditional stucco.

“The sunlight enhances its color,” says Miller. “The white contrasts with purple, which is everywhere. It’s uniquely their brand. It’s amazing how much purple you see from the soccer team.”

The intimacy of the building is what Charlie Thornton, Executive Vice President at ICON Venue Group, the owner’s representative for the Orlando City project, feels has been most pleasing to the owners. Almost 4,000 fans can be up close and personal, a major trend in stadium infrastructure adapting to Millennials who want to be more social and sit (or stand) wherever they want.

“Fans are as close to the action as they can possibly be, and there is also a safe standing section,” Thornton says. “People want to get away from enclosed environments and create more interactive and standing interaction for fans.”

Thornton’s ICON Venue Group is known for its Major League Soccer stadium expertise and manages the relationship between the Orlando City owners and other project stakeholders, such as the architects and contractors.

“We were brought in early because of unique circumstances,” says Thornton. “Orlando City was pursuing MLS to be the 22nd team. To get an MLS franchise, you have to have a soccer-specific plan.” 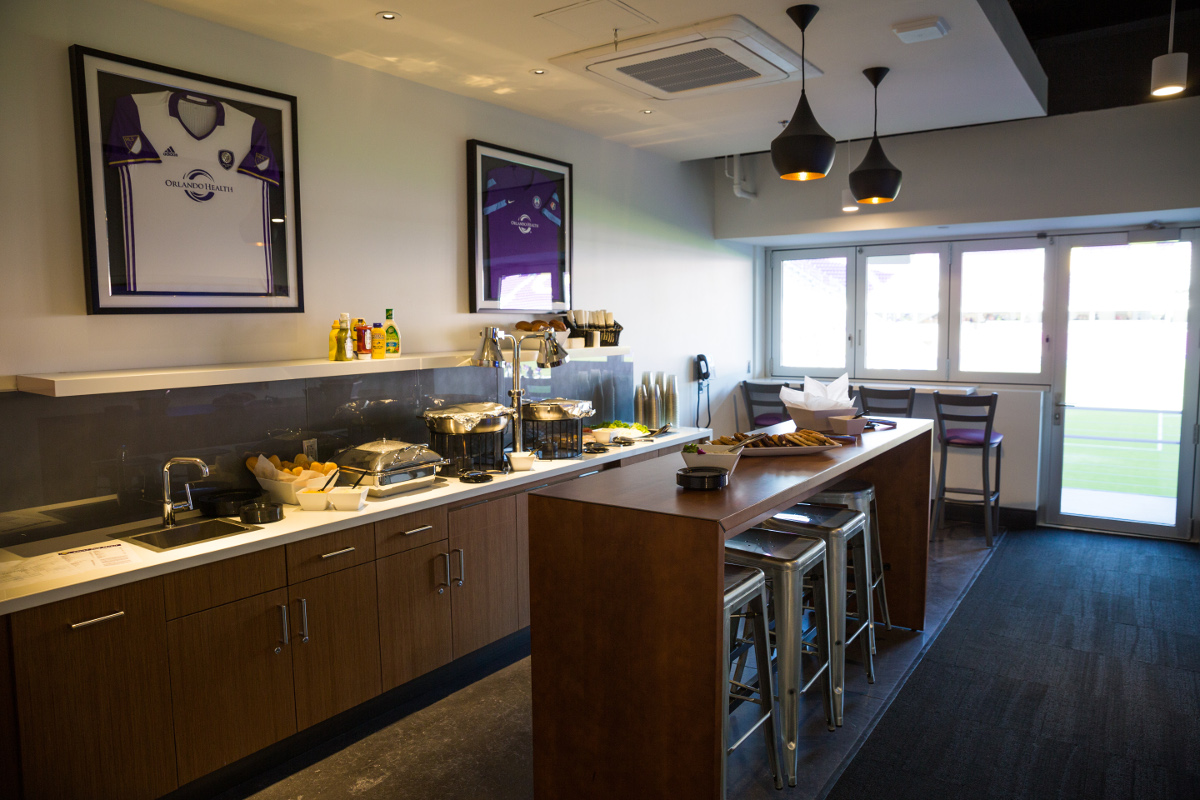 Orlando City Stadium is located in the downtown Parramore neighborhood district, near restaurants, shops, and other venues. Parramore is one of the more economically challenged neighborhoods in Orlando, yet its proximity to other similar and vibrant venues makes it a desirable location. Close to Amway Center, home to the NBA’s Orlando Magic, and Dr. Phillips Center for the Performing Arts, fans know the area, the merchants, and the vibe.

Miller continues, “The stadium will bring jobs and economic development into Parramore. We’ve created construction jobs, and there’s a big staff that’s growing to support it. We’ve designed inviting and functional offices for the staff with open floor plans and a lot of glass that faces the concourse.”

“It was an experience we set out to create… The Orlando City club really knows how to activate their fan base.” – Bruce Miller, Populous

All the associated entrepreneurial enterprises that invariably crop up to support major events promise an economic win for Parramore, the City of Orlando, the Lions, the entrepreneurs, and, most importantly, the fans.

Situated on Orlando’s popular Church Street, Orlando City Stadium is convenient to many of the city’s popular pubs and restaurants. Whether it begins at Ferg’s Depot, a massive sports bar housed in the historic Church Street train station, or the chic Rusty Spoon, owned by James Beard Award nominee chef Kathleen Blake, a purple-clad pilgrimage to the stadium has become an Orlando tradition. To add to the fun, plans are under consideration for an electrifying entertainment area nearby.

Chelsey Burns, Director of Premium Sales & Service for the Orlando City Soccer Club, has been busy.

Out of 31 luxury suites, only two private suites are still available. The upper level suites provide the grandstand view, while those on the lower level are only ten rows from the field, so fans will have a unique experience and will need to watch out for stray balls. Orlando City Stadium’s lone party suite is great for a birthday celebration with old friends, and the Audi Sport Club is perfect for meeting new friends.

“There’s intimate seating close to the field, right on top of the action, and the grandstand suites are more top down,” says Miller. “Some people like to watch soccer plays develop. Grandstand suites also provide a view of downtown Orlando.”

There’s also a seating section honoring the 49 victims of the Pulse nightclub tragedy, which occurred in June 2016. Those 49 seats, in six rows, can be found in the lower level of the west stand.

“It was [Orlando City’s] reaction to the tragedy, which we fully supported,” Miller says. “It’s a great symbol.”

Miller was pleased with what he saw on the sold-out opening day.

“It was an experience we set out to create,” he says. “The supporters rocked the house. It was pretty impressive. The Orlando City club really knows how to activate their fan base.”

Adding to the elation on the first day, the Orlando City Lions won 1-0 against the New York City Football Club.