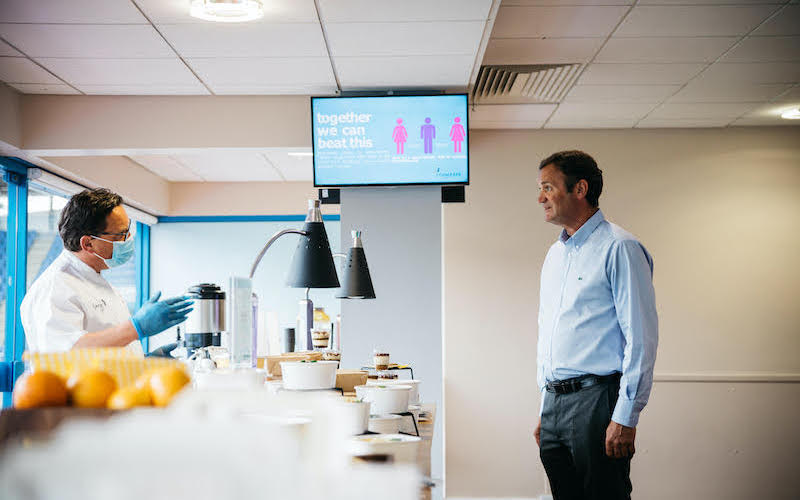 Editor’s Note: The following transcript has been abbreviated and lightly edited for clarity. To read the article in its entirety, visit www.sportsvenuebusiness.com.

The industry we love, and indeed our lives in general, were sent into a tailspin with the unwelcome arrival of the coronavirus. Every country, its people, and economies have been affected, with sports and live entertainment being the worst hit sector.

We have started to witness a return to a new normal, albeit in a piecemeal fashion, with only a limited number of venues having reopened their doors to fans, including New Zealand’s Eden Park, which welcomed a sold-out, full-capacity crowd for its opening game, Optus Stadium, which reopened for AFL on July 18 under 50% capacity crowd rules, and the 2019–20 PKO Ekstraklasa, which is now back hosting fans up to 25% of the stadium’s capacity.

The German Bundesliga, Spanish LaLiga, English Premier League, and Italy’s Lega Serie A are just some of those leagues having returned to business behind closed doors. Others, such as the Scottish Premier League, Euroleague Basketball, and the French Ligue 1, chose to cut their 2019-20 seasons short.

In the United States, Major League Baseball’s 2020 regular season’s Opening Night got underway on July 23, followed by Opening Day on July 24. Major League Soccer returned to play July 8, with all games being hosted at the ESPN Wide World of Sports Complex at the Walt Disney World Resort in Orlando, Florida. MLS is Back features an all-new tournament with regular season points and a spot in 2021 CONCACAF Champions League on the line. The 2019-20 NBA season restarted on July 30, also at the ESPN Wide World of Sports Complex. The NHL has also returned to the ice in hub cities in Toronto and Edmonton.

To get a sense of how stadia and arenas are preparing to reopen their doors, Katie McIntyre sat down (albeit virtually) with Nick Sautner, Chief Executive Officer at The Eden Park Trust, and Lee Zeidman, President of STAPLES Center, Microsoft Theater, and L.A. LIVE.

What preparations have you been putting in place ahead of reopening, and how have you had to adapt?

Sautner: The New Zealand Government introduced a countrywide COVID-19 alert system in mid-March, and the team here at Eden Park was always cognisant that we would need to prepare for a range of scenarios depending on the country’s alert level.

At Alert Level 4, the entire country was in a lockdown unless the services provided were classed as essential. At the opposite end of the scale, at Alert Level 1, restrictions were far fewer with the key focus being on self-managed personal hygiene.

In order to reopen in any capacity, we knew that either Alert Level 1 or Alert Level 2 would need to be in effect. When the restrictions on outside gatherings were announced as 500 patrons at Alert Level 2, Eden Park mapped out a scenario where the stadium could be segregated into blocks of 500 with designated entries and exits. We made plans for ten allocated gates, each zone able to seat 500, allowing us to host 5,000 fans within the seating bowl.

Our preparations included methods for contact tracing each group through both ticket allocation and technology, with measures providing restrictions on the contact points at the venue, including security, customer service, and catering.

We were grateful that these preparations ended up being unnecessary due to the change to Alert Level 1 prior to our first Super Rugby Aotearoa fixture. This enabled us to welcome fans back to the stadium with no restrictions.

We wanted to show the world, our industry, and our guests that we were willing to put our staff, procedures, and best practices to the test to achieve the GBAC STAR Accreditation. IAVM endorses the GBAC STAR Facility Accreditation, and we felt it was very important for us to use an independent third party for transparency. Our goal was to be the first arena in the world to receive the accreditation, and we are incredibly proud of that accomplishment.

In addition, we have gone through the venue top to bottom and instituted touchless/contactless technology, where appropriate. This includes contactless flush valves, faucets, paper towel dispensers, motion detectors for lighting control, sanitisation controls in and on elevators/escalator handrails, as well as in the process of replacing our POS system and implementing cashless policies and procedures. 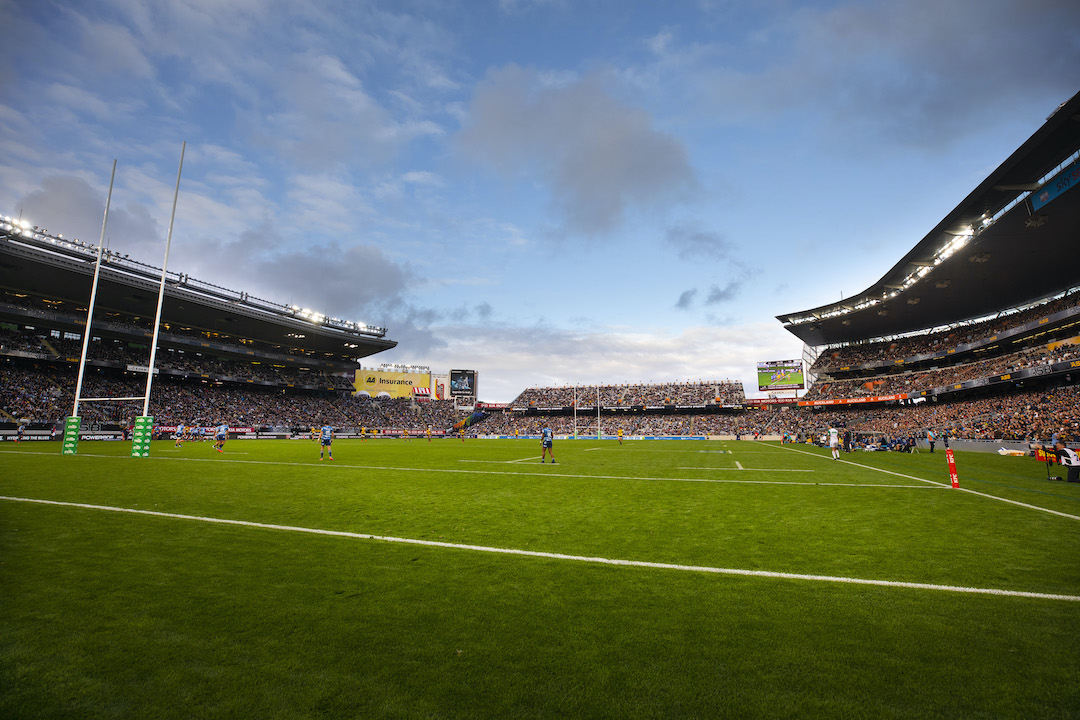 What kind of advice have you sought from industry colleagues, contractors, or any other sources?

Sautner: New Zealand has found itself ahead of the rest of the world in terms of reopening to crowds, so we’re in a fortunate position where we’re now able to offer valuable advice to our industry colleagues about the Park’s return to live events.

However, as we prepared to reopen the stadium, we sought guidance from numerous contractors, colleagues, and Government agencies, on how to best go about reintroducing live events.

Our Health & Safety advisor was an integral source of expertise, as were several contacts at New Zealand’s Ministry of Business, Innovation, and Employment. Guidance and restrictions were constantly evolving in New Zealand, and there were even key changes to Alert Level parameters as late as the week leading up to our first major event, so it was vital we remained agile and able to pivot at a moment’s notice.

During the early-mid phases of New Zealand’s lockdown, my executive team and I participated in as many collaborations with other venues and stadia as possible. We are members of both the Entertainment Venues Association of New Zealand and the Venue Management Association, which provided a number of valuable resources, and I took part in Sport NZ’s weekly online sector meetings which provided updates on the evolving situation.

In addition, we swapped resources on the roadmap to reopening with many other global stadia leaders. This knowledge sharing was immensely helpful for all of our venues to move forward and ensure the safety of our patrons, athletes, and staff.

Zeidman: I am grateful to have been a part of the venue and live entertainment industry for over 35 years, and one of the things I have grown to love is that when something major rocks our industry like 9/11 or the COVID-19 pandemic, we all share ideas, form task forces, and talk, text, and email on a regular basis to discuss best practices and what changes and updates we can make in advance to ensure we are ready to open our doors when we are given the green light.

Through IAVM, we connected with the GBAC STAR Facility Accreditation, and that allowed us to go through over 20 years of experiences, philosophies, and procedures. Our current team took all the documentation, SOP’s, procedures, and best practices, and condensed them into one single viable and concise document. We took an extensive amount of time to look at the risk assessment, and working with the GBAC STAR team and our partners ABM, AtmosAir, BELFOR, and BluEco, we were able to evaluate, improve, and strengthen our procedures to better identify, mitigate, and overcome risks. 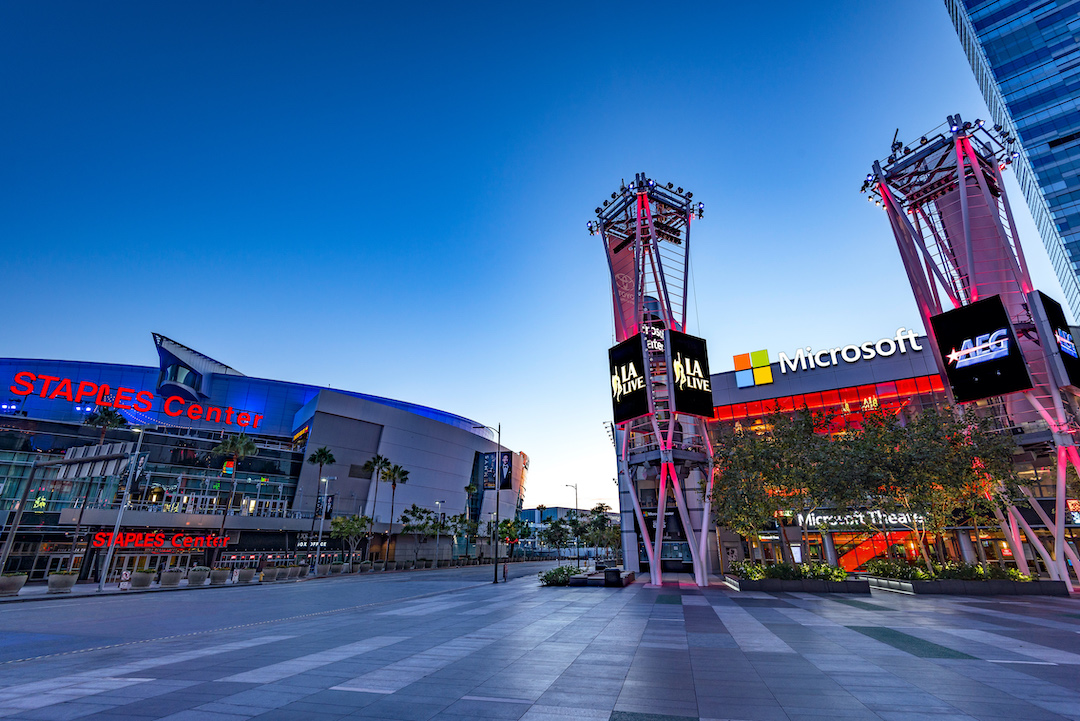 STAPLES Center was the first U.S. arena to achieve GBAC STAR™ facility accreditation, the gold standard for prepared facilities and the highest level of accreditation as determined under the guidance of GBAC, a Division of ISSA, the worldwide cleaning industry association.

What advice would you give other venues as they start their journeys towards reopening and welcoming fans back?

Sautner: First and foremost, make a clear plan in conjunction with your hirers, your contractors, and your relevant Government/State authorities. Keep in mind that the safety of your patrons, staff, entertainers, and athletes is of the utmost importance, and prepare a strategy that has this principle at its forefront.

On gameday, ensure the measures that are being taken to protect your patrons are clearly displayed around the venue to give them a level of comfort that will allow them to relax and enjoy the entertainment.

Once you have your guidelines in place, begin to look into creative initiatives that can make the experience a truly memorable return to live sport and entertainment. The event should be an occasion that marks a return to life as normal. Eden Park and Auckland’s rugby union team, the Blues, included several special initiatives prior to kickoff, including a flyover from a Hercules plane, and a standing applause for New Zealand’s team of five million who had overcome the threat of COVID-19. In addition, there was special appreciation shown to our essential workers through another round of applause.

Finally, I’d encourage you to enjoy the moment of that first event. Across my tenure as CEO at Eden Park, I’ve had a number of proud moments. I can say undoubtedly that welcoming a sold-out crowd back for the resumption of Super Rugby Aotearoa following a global pandemic is right up there. My team, who had just been through a challenging and difficult three months, came together and worked tirelessly to deliver an event to remember.

Zeidman: Educate, educate, and then educate. We will need to educate our team members and staff, the athletes, performers, and artists that play in our venues, and the millions of fans and guests who will come back that we are safe, secure, sanitized, and disinfected against the viruses we face and that we will continue to be proactive rather than reactive as it relates to this pandemic.

COVID-19 has really tested everyone that likes to work two to three steps ahead and will continue to do so as we move forward, but we will work hard to adapt as we navigate through this pandemic. And when and how we open will be determined by the science and data.

This content has been reproduced courtesy of Sports Venue Business. To read the article in its entirety, including additional comments from Nick Sautner and Lee Zeidman, as well as input from John Langford, President of European Arenas Association, Patrick McMeekin, UK Licensee at SEATSERVE, Rak Kalidas, Commercial Director at Levy UK + Ireland, and Chris Bray, CEO of Sports & Leisure at Sodexo UK & Ireland, visit www.sportsvenuebusiness.com.