The home of the Cleveland Cavaliers is newly transformed, both in name and in 150,000 square feet of new premium experiences, bringing fans at all ticket levels closer to their team, their city, and to each other.
By Denise Drach, ROSSETTI 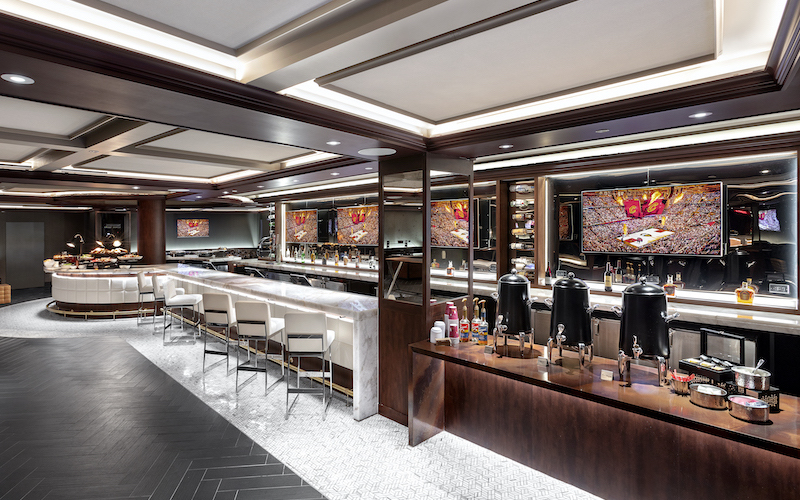 Everyone wants to feel special. But not everyone wants luxury. It’s a balance that relies on “curating a range of experiences from uber lux to tiny lux,” according to Matt Rossetti, President of ROSSETTI.

In the context of venue design, what does luxury really mean? We define it as creating a connection to indigenous location, weaving in brand and cultural influences, and elevating through sponsorship. The more original the ideas, the details, and the materials, the higher the scale of luxury.

“Our clients are keen observers of what is being done in other venues,” says Kelly Deines, Principal and Creative Director at ROSSETTI. “It can become overwhelming, and staff departments often have competing ideas. A balanced premium strategy has to be personalized to the culture of the team and city. A holistic masterplan will help provide clarity.”

Like most arenas built in the 1990’s, Quicken Loans Arena, as it was called prior to the renovation, featured a “racetrack” format with utilitarian amenities and an overabundance of underutilized suites.

Despite its shortcomings, the arena was popular, averaging 200 ticketed events each year and 1,400 private events. Yet with the Cavaliers located in the small to mid-sized Cleveland market, it would have been nearly impossible to finance a new arena to the tune of $800 million. The decision to repurpose was evident, but not easy.

The ROSSETTI team began working with Len Komoroski, President of Rocket Mortgage FieldHouse, and his staff in 2006 on a series of smaller renovations for Quicken Loans Arena. The team also explored a variety of premium and communal concepts that were the early ideas for the hospitality visioning and neighborhood components. A facility assessment, conducted in 2013, determined the arena was structurally sound, and the pace of design picked up.

Our approach to arena renovation is a Return on DesignTM process. In this project, it bridged the Cavs objectives, business goals, and existing data to our plans for the differentiated seating strategy. It’s hard to believe now, but 13 years ago, franchise sales and ticketing teams were still fairly siloed.

We worked with the organization’s staff members to plumb their knowledge on guest behaviors and brought ticketing and sales data, industry benchmarking, and market data into the equation. As the design concepts began to evolve, SHoP Architects from New York were brought to the project for their construction expertise and to implement ROSSETTI’s original idea for the dramatic curtain wall feature. 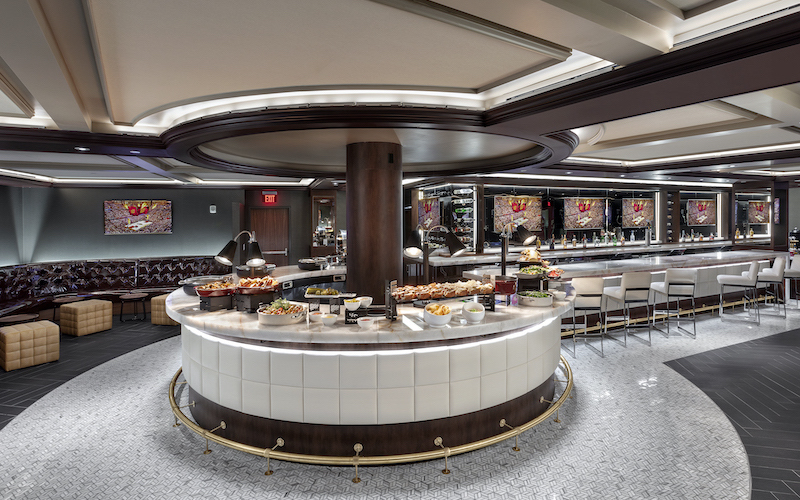 At just over 3,000 square feet, the Litehouse Chairman’s Club hosts up to 250 members in a space that pays tribute to Cleveland’s vibrant architectural heritage. All photography credited to Trepal Photography.

A renovation of this type takes years of preparation. The arena is owned by Cuyahoga County and is a partnership between the City of Cleveland, Gateway Economic Development Corporation, and the Cavaliers. In tandem with the development of the arena design, the Cavs were balancing a host of complexities in preparing for a top-to-bottom renovation.

For example, despite its location in the highly desirable downtown stadium district, the arena was inward facing and felt disconnected. ROSSETTI had explored concepts as early as 2006 to create an urban living room concept. It made sense to roll out the transformation to the exterior and neighboring community.

“The Cavs realized a renovation provides the perfect timing – a ‘halo effect’ – to create excitement and a sense of confidence for corporate partners.”

Today’s arenas look to create seven days a week, 365 days a year of mixed-use developments to leverage the real estate and reach out into the community. The mindset to embrace cities as our cultural and entertainment hubs is bringing people back into downtown areas, even in the Midwest.

Fast forward to 2017. The average lifespan of a building in the NBA is 22 years. Located in the 21st and smallest NBA market with three professional teams and the fourth lowest household income, a renovation became imperative to compete with teams in larger markets. The Cavs decided to ignore the old rules on arena lifespan.

As the project evolved, ROSSETTI became the Associate Architect with our role focused on the masterplan of 150,000 square feet of new premium spaces, as well as the concept design.

Fresh design for premium spaces and payback of revenue generating areas are important goals, but they must balance with other issues. We know venues with good processions, in other words those that create an exciting approach, are easy to get into, get through controls quickly, and also have higher F&B spending.

For these spaces, offices, and player areas, a team of architect partners was assembled, including Gensler, and the renovation kicked off in the fall of 2017. The firms coordinated using many communications and 3D design tools to facilitate seamless working relationships between the architects, sub-consultants, general contractor (Whiting Turner), and of course, the Cavs. 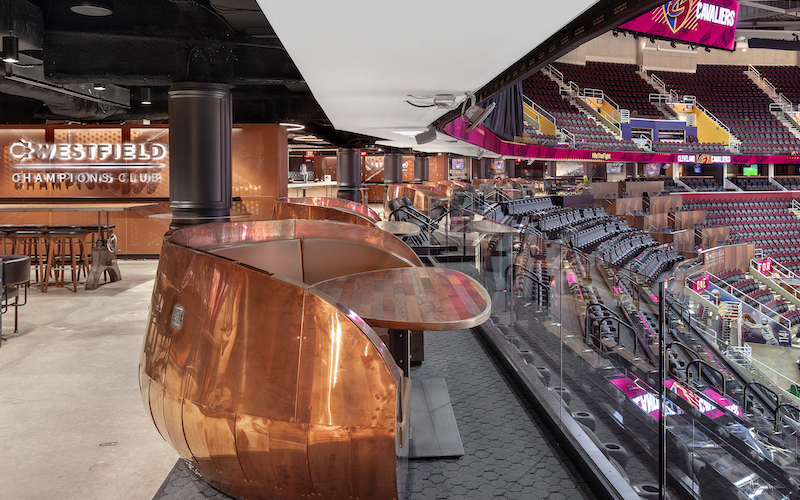 ROSSETTI worked with a specialty vendor to ensure the copper patina on the banquettes in the Westfield Champions Club achieved the perfect finish. 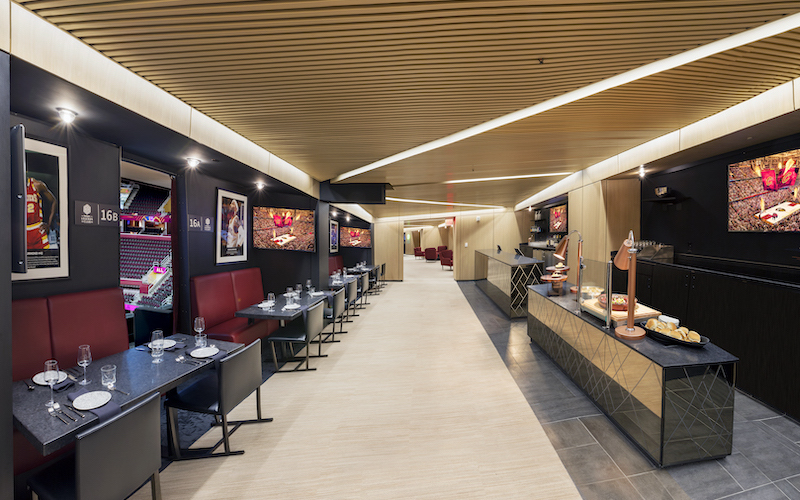 In the Huntington Legends Club, which services four- and eight-seat theater boxes, members entertain their guests at lounge seating and private dining tables.

ROSSETTI’s design focused on the parameters of each club from specific fan perspectives. There are distinct experiences with clear stories and pathways while maintaining the overall branding and design themes. The design intent also aligns with operations to ensure efficiency.

“The fun of working on sports hospitality projects, and especially for Rocket Mortgage FieldHouse, is to choreograph a series of hospitality spaces, designing them on a parallel path, yet with clear distinctions from one club space to another,” says Deines.

A total of 62 suites have been reimagined and redone. Seven membership spaces are now available throughout the facility, accommodating member groups from 100 to 500 or more.

One of the special club areas is the Huntington Legends Club, which subtly celebrates the notion of Cleveland’s birth in 1796 as well as its industrial history and growth. Guests can dine in large communal areas and watch events from private theater box seating.

The team repurposed an old weight room and practice facility to become the Bacardi Ocho Signature Lounge, a dramatic 2,000-square-foot space with a ground floor view of the players coming out of the locker room. High-end materials reflect the natural metals of the region and nod to Cleveland’s maker history.

An old lounge turned into a Chairman’s Club, which provides floor seating and an opportunity for the sales team to secure long-term agreements. The Courtside Club is a 5,800-square-foot space in the receiving docks area of the event level that features a 153-foot-long drink rail. The Westfield Champions Club, repurposed from another old lounge space, celebrates the 2016 Cavaliers NBA Championship with nostalgic imagery.

In addition, suites were reduced into theater boxes, club boxes, club seating, and banquette seating to meet a number of different price and experience segments. There’s something for everyone. 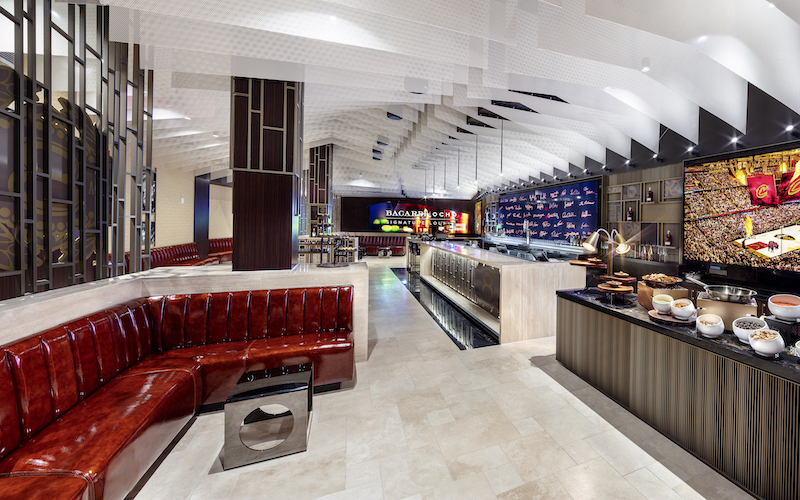 Designers transformed an old weight room into the renovation’s crown jewel – the Barcardi Ocho Signature Club. This most exclusive space provides 160 members with visual access to the players tunnel from the arena’s most finished 2,000 square feet.

Rocket Mortgage FieldHouse upgraded 62 suites during its transformation. In sum, ROSSETTI created 150,000 square feet of distinct premium experiences, in collaboration with Gensler and SHoP Architects, as part of the $185 million renovation.

The design theme celebrates the industrial aesthetic of Cleveland with a Scandinavian design vocabulary. The resulting elegant and clean-lined premium spaces use refined materiality and contrasts of light and texture while highlighting dramatic focal points. Material sampling of iron, steel, and copper combined with stone and wood grounds the design in regional elements familiar to Northeast Ohio.

In fact, one of ROSSETTI’s strengths is using materials in interesting ways to ensure a custom solution. We worked with a specialty vendor to research the copper patina on banquettes and design scribing on metal doors to achieve the perfect finish to meet the Cavs’ expectations. Areas such as Loudville also showcase Cavs branding and graphics.

“A balanced premium strategy has to be personalized to the culture of the team and city.”

“We know today’s corporate partners are looking for ways to engage with fans in quality environments and experiences,” says Rossetti. “While you can’t measure everything, the Cavs realized a renovation provides the perfect timing – a ‘halo effect’ – to create excitement and a sense of confidence for corporate partners.”

Deconstructing the upper bowl into new hospitality experiences is the ideal real estate to attract partners and achieve a neighborhood scheme. The arena went from having no neighborhoods, to having eight.

Budweiser Loudville, in particular, creates a special general ticketing and communal experience, which fans continue to crave. Located in the upper deck, three sections of seating were removed to create this new, dynamic area. Its statement bar overlooks the city, and it’s proven to be extremely popular.

In all, the transformation of Quicken Loans Arena to Rocket Mortgage FieldHouse was $185 million and spanned two summers. According to Deines, it’s typical for a project of this size and complexity to span two summers.

“It’s the nature of the architecture industry to go through iterations of the design,” Deines says. “However, the vision is never compromised, and the goals are always clear.”

Construction completed at the end of September 2019. The public was invited in with a free open house on September 28, followed by the grand opening concert by The Black Keys on September 30.

The arena sparkles like new, but for a fraction of the cost of a new build. The rebranding and physical metamorphosis will carry Rocket Mortgage FieldHouse into another 20 years of first-class hospitality and entertainment for the Cavs and the City of Cleveland.