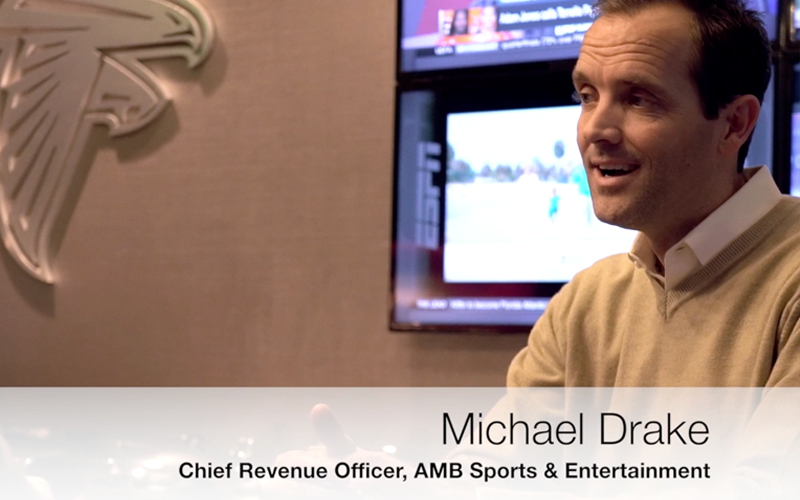 AMB Sports & Entertainment, parent company of the Atlanta Falcons and Atlanta United, opened its preview center for the $1.5 billion Mercedes-Benz Stadium in 2013. A lot has changed in those two and a half years. Rendering became reality, and the Falcons made it to the Super Bowl.

The function of the preview center is the same as in other markets – take prospective customers on a journey that introduces them to new products.

To achieve that end, Michael Drake, SVP and Chief Revenue Officer at AMB Sports & Entertainment, worked hand-in-hand with HOK (360 Architecture at the time) to design and program an effective sales tool.

Drake and his sales team have hosted over 25,000 people in the preview center, leading to sold-out conditions in many premium seating areas. AMG Lounge club seats, Owner’s Suites, Loge Suites, as well as the North and South Piedmont Clubs are all at capacity. Drake suspects another 5,000 to 6,000 people will visit leading up to the opening of Mercedes-Benz Stadium on July 30th. Six months out from ribbon-cutting, 30% of sellable inventory remains available.

Sales reps begin their prospects’ appointments by immersing them in a detailed timeline that chronicles the history of the Atlanta Falcons.

“We just want to build up the emotion of being a season ticket holder,” Drake says. “We started with [the timeline] because what we’re asking someone to do in the new stadium is join us for 30 years. We want them to remember the times that they had over the past 10, 20, 30 years. We know at the end of the presentation, we’re asking them to do it again.”

“Putting a hard hat on somebody changes the emotion dramatically. So we’re capitalizing on that in a big way.” – Michael Drake, SVP and Chief Revenue Officer, AMB Sports & Entertainment

“The Atlanta fan base is used to fantastic events,” says Drake. “I immediately realized I needed to pay homage to the past events and promote the upcoming events that we’ll have in Mercedes-Benz Stadium.”

Next comes the great reveal – the stadium model complete with a replica halo board overhead.

“[The stadium model] is the crown jewel of the preview center,” Drake says. “It’s been a real hit for welcoming our fan base. We can do personalized messages [on the halo board], even a couple sponsor presentations when that made sense.”

Adjacent to the stadium model in the preview center is a virtual reality station, where visitors can walk through parts of the building and get a 360-view of what awaits them.

The preview center journey finishes in a full-scale model suite, complete with the exact interior experience to be had in the real venue, from the countertops, carpet, and cabinetry to the light fixtures with geometry inspired by the building’s unique exterior design to the televisions set in the bathroom mirrors.

The preview center has been critical to AMB Sports & Entertainment, who rolled out a personal seat license campaign that required education to dissuade the discomfort of some in the market.

“We really built this space for the season ticket holder,” says Drake. “Inevitably, things are changing, and with change comes apprehension from a season ticket fan base. It’s an easy-going sales process, really just trying to define the difference between what they have today, what the seat license provides going forward, how the building will act differently from a fan experience perspective.”

As Mercedes-Benz Stadium evolves from a plate of steel spaghetti to what can actually be made out to be a sports stadium, Drake and his team are starting to grow out of the preview center.

“We’re starting to interact with the building now,” Drake says. “Putting a hard hat on somebody changes the emotion dramatically. So we’re capitalizing on that in a big way.”

With the Falcons in the Super Bowl, that emotion is expected to result in a sold-out venue.