The Soccer-Specific Stadium Boom Continues: Trends That Keep Fans Coming Back for More

New teams entering MLS means new stadiums coming online, the soccer-specific stadium being one of the main criteria considered by the league when awarding expansion bids to new cities. Within those recent and new builds, a few common threads can be found.

When the ALSD attended Soccerex USA in November in Miami, one of the sessions that piqued our interest was “Meeting Fans’ Needs Through Soccer-Specific Stadia.” Moderated by Trevor Watkins, Global Head of Sport at Pinsent Masons, the session featured insights on new and upcoming MLS venues from Jonathan Emmett, Design Director and Sports Facilities Leader at Gensler, Chris Wright, CEO of Minnesota United, Jeff Berding, President of FC Cincinnati, and Jen Johns, VP of Marketing and Communications for the Atlanta Super Bowl Host Committee.

The thing about Major League Soccer is that currently most of its new stadiums are being built alongside the creation of the teams that will inhabit them. And with multiple expansion clubs set to begin play in future years, the venue marketplace can continue to look for many new soccer-specific stadiums to come online through 2021 and beyond.

“In a lot of ways, soccer really has an advantage over many of the other sports here in the U.S.,” says Emmett, who led the design team for LAFC’s Banc of California Stadium, opened earlier this year. “It's a limited number of games, there’s a set amount of time, it’s a short duration, and I think that drives a lot about what we can really build the sport on here in the U.S.”

For the family, soccer is a predictable 90 minutes on the field, give or take. For the Millennial, soccer is communal and tribal, with safe-standing spaces for supporter groups and technology that enhances the experience without distracting from it. For the global fan, soccer is diverse and inclusive, reflected in new F&B offerings. And for the corporate suite holder or club seat holder, the MLS season falls into a manageable 17 home matches.

“Every MLS market is unique,” says Emmett. “It is becoming increasingly important to create not only soccer-specific venues, but city-specific venues. Fans expect local experiences that reflect their cities and people.”

This level of segmentation and localization is consistent with new venues in other leagues and leads to a wider mix of ticket products. 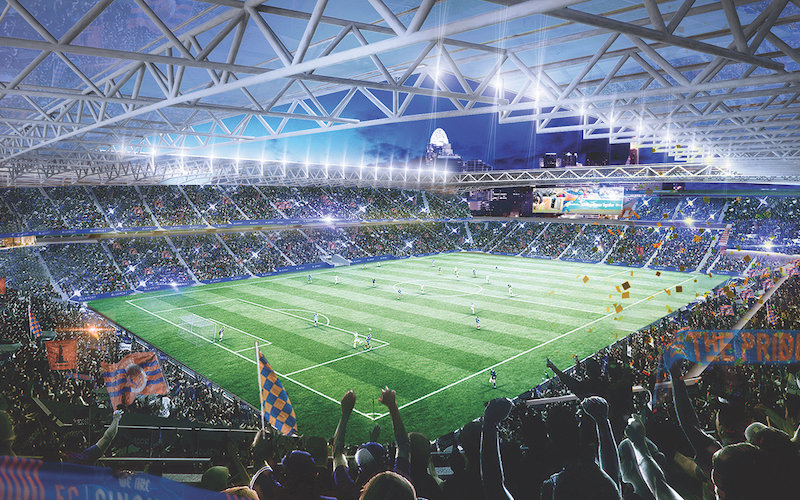 Renderings for FC Cincinnati’s stadium, which broke ground in December, display a venue with 26,000 seats, including 4,500 premium seats. Image from MEIS.

FC Cincinnati has two key design principles for its new stadium, set to open in 2021. The first is fan experience. The second is monetizing the building.

LAFC’s newly opened Banc of California Stadium claims 23 different seating experiences within a 22,000-seat footprint. The venue is the first in the U.S. to incorporate safe-standing areas for its supporters’ group known as The 3252.

Minnesota United’s Allianz Field, set to open in 2019, will accommodate 19,400 fans each game, with various club, loge, and suite products including a supporters’ section of 2,800 safe-standing areas.

With the majority of new MLS stadiums being privately financed, monetization of the venue and surrounding acreage is critical to a sustainable model for ownership groups. 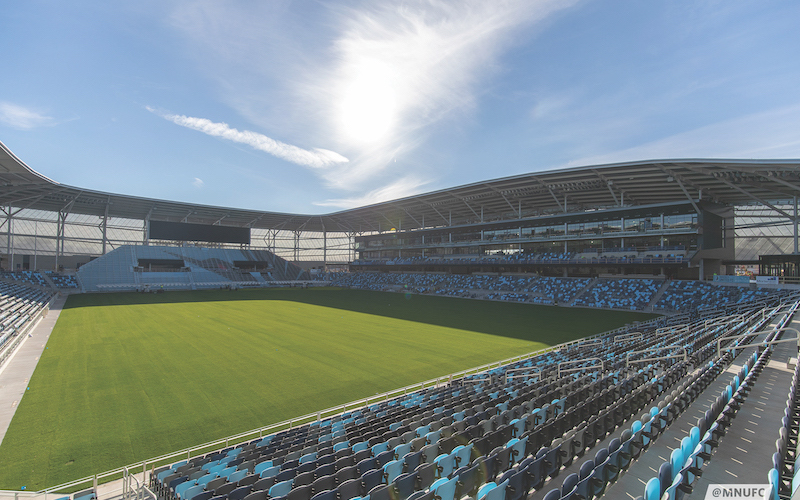 Minnesota United’s Allianz Field, set to open in 2019, will host 19,400 fans each game in unique spaces like the supporters’ 2,800 safe-standing areas.

In addition to the right ticket product and price point, food and beverage offerings continue to rise in importance.

At Mercedes-Benz Stadium, home to both the Atlanta Falcons and Atlanta United, the ownership group’s commitment to “Fan First Pricing” has shown initial signs of increasing per cap expenditures as fans arrive earlier and stay longer.

“There are 251 languages that are spoken in Minnesota, so we have a very ethnically diverse marketplace that we've got to appeal to,” says Wright. “When they come into our stadium, how do we greet them? It’s something that is near and dear to their heart, which is food and beverages.”

“In order to have a club that’s invested in the community and has a quality product, you have to drive the local revenue.”

Three different surveys by Minnesota United only once produced a traditional American beer on the list of top seven beers requested for the new stadium. The rest were craft.

In Los Angeles, per request, fans have a dedicated supporter bar with a view of the pitch, so they never miss a moment of the game. They also requested high-quality, authentically L.A. food and beverage.

“The most unique aspect of the F&B experience at Bank of California Stadium is The Fields LA – a three-floor, urban culinary destination that is open year-round, seven days a week,” says Emmett.

The ground floor hosts a food hall showcasing nine local chefs. The second floor features a restaurant with classic bar bites, craft beers, and cocktails. The third floor is a rooftop event terrace with views of Downtown LA and the Hollywood Hills. 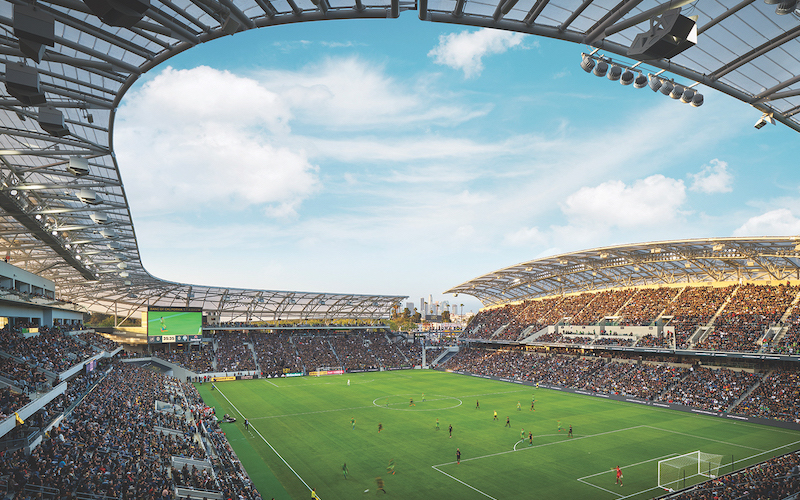 A sliver of the northeast corner of Banc of California Stadium was strategically carved out to capture views of Downtown LA. 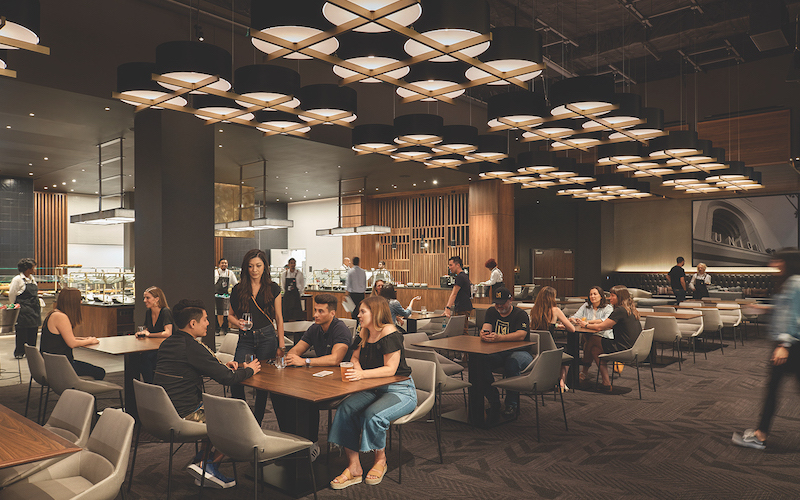 Banc of California Stadium incorporates a multi-floor culinary destination, dubbed The Fields LA, that is open seven days a week. Images from Gensler.

While most new MLS venues are designed with a single soccer tenant at the forefront, they are also designed to be utilized year-round.

Banc of California Stadium, for example, can accommodate concerts, esports, and other events. At Allianz Field, LED strips cover a translucent PTFE mesh that wraps the building, allowing it to change color for different events.

With Nashville, Miami, and Cincinnati’s venues set to open in 2021, and future expansion teams on the way, soccer-specific venue development should be worth keeping an eye on.

What do you expect from the next generation of soccer-specific stadia?
Write to Max at max@alsd.com.