The Sounds of Music City

Built on the historic grounds of the original Sulphur Dell ballpark, First Horizon Park harkens back to Nashville’s baseball roots, while strategically positioning the Sounds to capitalize on the explosive growth happening in the Music City.

Nestled in Nashville’s fast-growing Germantown neighborhood, the five-year-old First Horizon Park, home of the Nashville Sounds, has benefited from the boom of economic expansion bringing jobs and people to fill those jobs to the area. With growth comes a larger volume of walk-up fans from the surrounding neighborhood, as well as corporate clients, local celebrities, and even a high number of bachelorette parties.

“We’re seeing more pedestrian traffic through our gates,” says Bryan Mayhood, Vice President of Sales for the Sounds, the Triple-A affiliate of the Texas Rangers. “It’s not just the hundred people per day moving into Nashville over the last several years [that’s fueling the growth]. It’s also companies relocating their headquarters to the Middle Tennessee region.”

Two spaces that illustrate the venue’s ability to flex to a broad range of customer personas are the Field Suites, First Horizon Park’s most premium product, and The Band Box, a unique outfield party zone complete with culinary delights, whiskey slushies, and even a miniature golf course.

The Field Suites offer the best of all ballpark worlds to premium clients – private indoor space, a large outdoor communal area, and the best seats in the house.

“When you’re in the first couple rows, you’re closer to home plate than the pitcher is,” notes Mayhood.

The four suites contain all the amenities premium customers have come to expect – food stations, luxurious furniture, a plethora of mounted televisions, and climate control. Each unit also features a glass door that leads fans to an outdoor social destination, between the suites and the seats, adorned with high-top tables and plenty of space to mix and mingle.

“It’s actually worked out better in the long run versus that traditional season ticket membership. The revenue generated from the F&B side when we have these [suites] rented far outweighs season ticket holders.”

Each Field Suite accommodates between 30 and 50 guests. If companies need to entertain larger groups, they can simply rent out multiple units and open up the sliding doors connecting each of them. The suites are competitively priced at $50 to $60 per person (not including the cost of catering) and are sold as nightly rentals, as opposed to being part of season ticket or leased packages.

The hangout patio is carved out of the seating bowl, which could be viewed as a significant risk by sacrificing what is widely considered the most valuable real estate in a ballpark.

“I can’t imagine that discussion when they were designing this,” says Mayhood. “This is prime season ticket inventory at the highest dollar amount and guaranteed to sell.”

The Sounds opted for an alternative strategy, removing seats connected to long-term season ticket packages, and replacing them with the nightly hospitality option, where the risk diverts to the sales team to make sure it sells the four per-event suites enough times to generate more return.

“It’s actually worked out better in the long run versus that traditional season ticket membership,” Mayhood says. “The revenue generated from the F&B side when we have these [suites] rented far outweighs season ticket holders, some of whom show up maybe 50% of the time.”

While Field Suites are usually aimed at a corporate audience, they are also versatile and accessible to other fan segments.

“We’ve had little Timmy’s birthday party down there as well,” adds Mayhood. “It can be customized with different catering options to make it more kid- and family-friendly.” 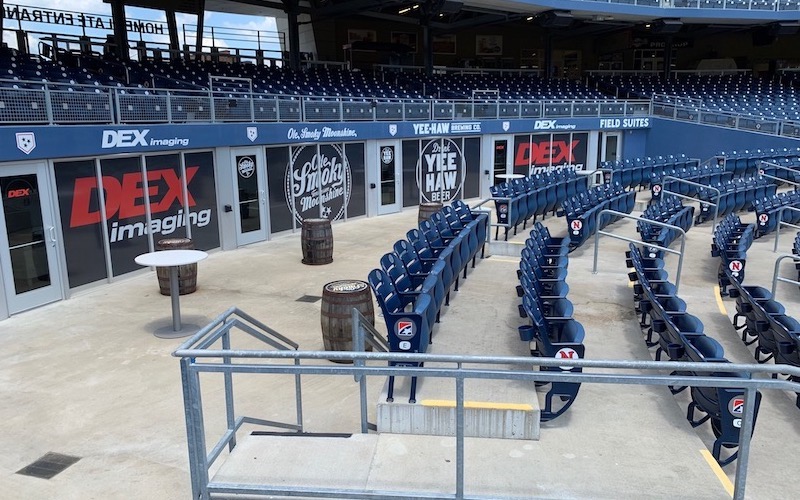 Four Field Suites at First Horizon Park spill out into a communal patio between the suites and seats, repurposing what is traditionally prime season ticket inventory into nightly rental space that, when sold, generates higher returns per square foot. Photo courtesy of the Nashville Sounds.

For a cool $10, fans and local celebrities alike kick it at The Band Box, a massive social wonderland underneath the glow of First Horizon Park’s gigantic guitar-shaped outfield video board. It’s so gigantic in fact, those who endeavor to snap a selfie from beneath it usually can’t fit it in frame.

While there’s a great view of the field, The Band Box appeals to a different kind of fan.

“It caters to people who don’t need to know about baseball,” says Mayhood. “They come for the atmosphere. They come for a good time. There’s cornhole, ping-pong, shuffleboard, and there’s music going on all the time.”

“It caters to people who don’t need to know about baseball. They come for the atmosphere. They come for a good time. There’s cornhole, ping-pong, shuffleboard, and there’s music going on all the time.”

Popular at The Band Box bar is an assortment of slushy options featuring George Dickel Tennessee Whiskey. The frozen treats are so popular in fact that First Horizon Park is George Dickel’s highest-selling property in Nashville despite only having approximately 70 active dates annually, eclipsing other properties that operate year-round.

The George Dickel brand is also applied to 26 4Topps tables sold at the base of The Band Box that complement all the couches, Adirondack chairs, and other unique seating types dotting the area.

Nashville-based Strategic Hospitality shapes the food experience of The Band Box under the umbrella of the ballpark’s main concessions partner Centerplate. Engaging its relationships around town, Strategic Hospitality programs the space with high-profile chefs, garnering attention from the discerning foodie demographic.

The Band Box also features a creative nine-hole mini-golf course filled with sculptures by various Nashville artists. One hole is presided over by a giant fish-boy (it’s exactly what it sounds like), while others are decorated with oversized guitars or playful, robot heads. Don’t let the disarming charm fool you though. We hear the course is quite challenging.

The Band Box has proven attractive to just about anybody and everybody in Nashville. When the Tennessee Titans’ offensive line visited the ballpark, they opted to hang at The Band Box instead of in a suite. Nashville residents and rockers Kings of Leon made the same call. With the potential for celebrity sightings and the promise of a good time for ten bucks, it has become a hot spot for all kinds of social groups. 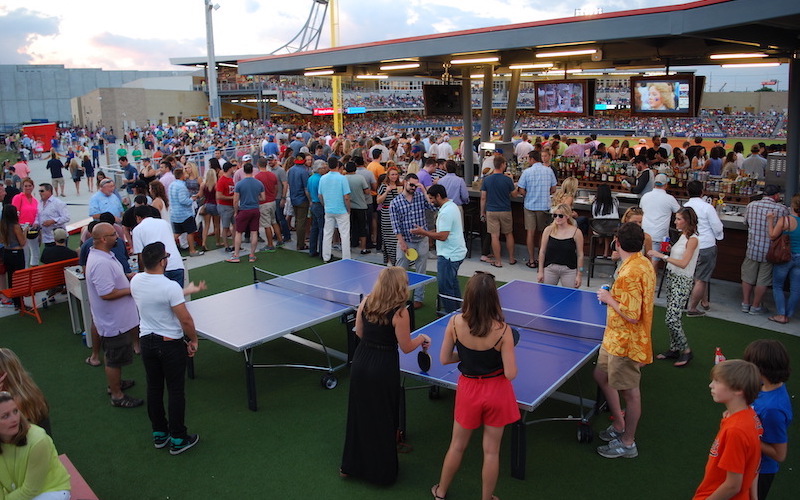 The Nashville Sounds continue to find ways to activate all the fun and history their facility represents. As First Horizon Park moves into its sixth season, the Sounds aim to keep adapting to the growth of the surrounding area while remaining flexible for a wide fanbase, evidenced by The Band Box, Field Suites, and a multitude of additional seating options.

“If you’re a hardcore baseball fan, you can get a really good seat close to the field at a very affordable rate,” Mayhood says. “If you don’t even know what teams are playing, but you want to have a good atmosphere and a good time, [First Horizon Park] allows for that to happen.”