Spur of the Moment

With its flexible design and elements for all fan constituencies, the upcoming new home for Tottenham Hotspur promises to be among the best in European football and the world’s next great sports and entertainment venue.

For a long time, football fans around the globe knew North London as home of the “North London Derby” – a matchup considered one of the most intense in all of European football between Arsenal and the Tottenham Hotspur Football Club.

But in the next few months, that will change as Tottenham Hotspur is set to open a new stadium on the site of the club’s old home, White Hart Lane, a stadium set to revolutionize the in-match experience for fans and propel the club into the financial realm of other elite European football clubs like Manchester United, Manchester City, Real Madrid, and Paris Saint-Germain.

While the Premier League’s TV contracts have allowed all teams in the league to benefit from a certain amount of financial stability, for the top clubs in the league, match-day revenues are still a big part of the equation that enables clubs to compete for Champions League silver and for the best players in the world.

For Tottenham, the move to its new 62,062-seat stadium is a prerequisite to achieving financial parity with the other North London teams. The club generated about £42.5 million in its last season at White Hart Lane and is looking to see that match-day revenue double in the first year at the new building, currently being referred to as Tottenham Hotspur Stadium.

The new North London stadium for Tottenham Hotspur is expected to double the club’s match-day revenues from White Hart Lane.

Compared to other competitors in London, the projected £85 million match-day revenue will still find them trailing archrival Arsenal, who regularly tops £100 million per season.

Other economic issues persist, as the club and manager Mauricio Pochettino have built a young, exciting club that has captured the attention of football fans across England and has a number of developing stars that will be attractive to other financially successful teams.

Pochettino regularly speaks out about the team’s need for the new stadium to compete financially, while also using the new stadium as a tool to keep desirable players heading into the new season.

For a team that has spent this season homeless, playing all of its matches at Wembley Stadium, the new building will quickly offer a sense of place to the players and fans that they’ve never felt before, even though White Hart Lane was one of the iconic football pitches.

For fans, the transition will be simple, as the new building will be at the same stop as before, and all public transportation options will remain the same. 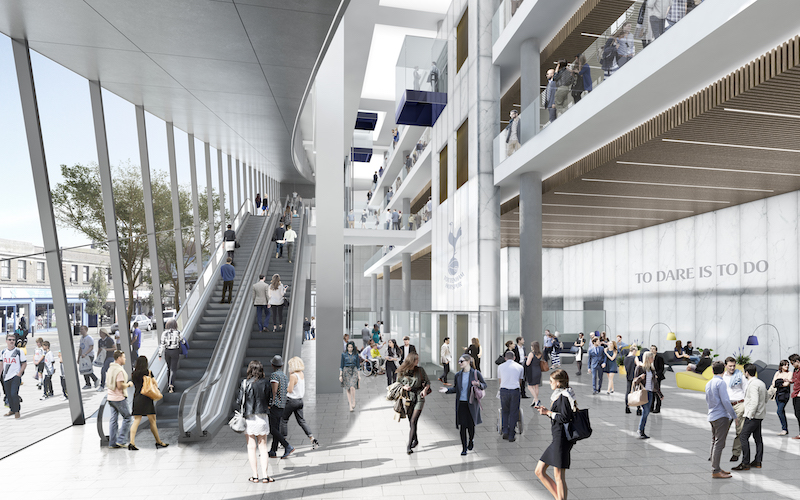 One of the defining features of most European football stadiums is the intimacy that fans feel with the field. At the Spurs’ new venue, maintaining that intimacy was one of the key design decisions because White Hart Lane had been considered one of England’s fiercest and most intense buildings, partly due to the presence of “The Shelf” – a single-level stand that at its most dense could hold around 20,000 fans.

Despite being in a new and ultra-modern building, the new stand uses bricks from White Hart Lane and has metal work inspired by Archibald Leitch’s design of the old shelf. In the new building, the Spurs will work to recreate that atmosphere for a new era by building a 17,500-seat, single-tier southern stand that has been designed to generate a “wall of sound.”

This new stand was inspired by the famous “Yellow Wall” at Borussia Dortmund, one of the most famous sites in all of European football, and a stand holding over 20,000 fans that has been described as “crushing” to opposing players.

Every aspect of the stadium has been designed to create a match-day experience that is unrivaled, not just in the UK, but around the world. The seating is designed to get fans as close to the action as possible, the front row being 4.9 to 7.9 meters from the touchline. There are also four giant HD screens for replays, graphics, and entertainment, along with a state-of-the-art sound system. 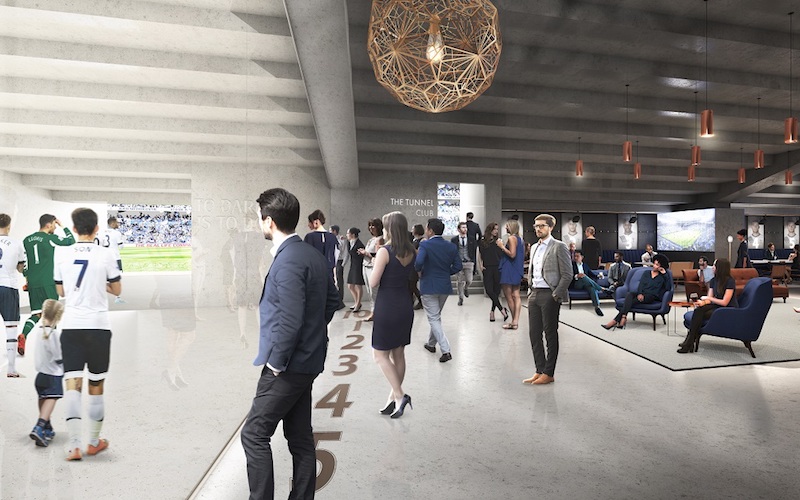 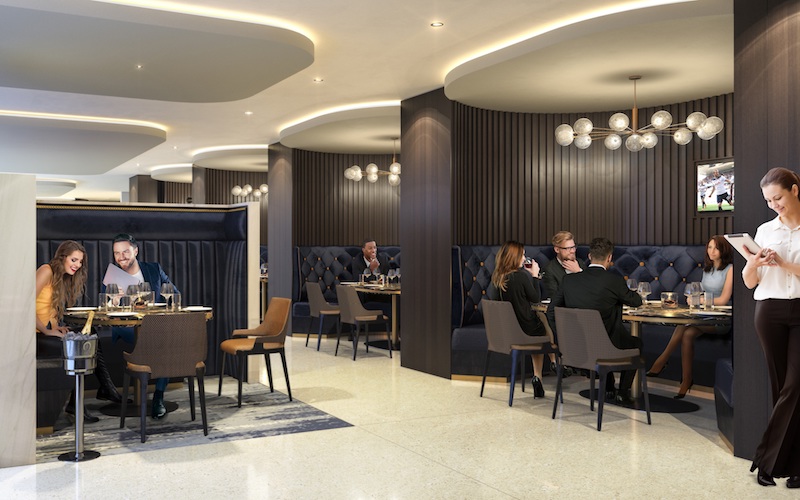 NFL Partnership and Other Events

Not just for soccer, the club has signed a ten-year deal with the NFL to be the London home to NFL football beginning in October with the Seattle Seahawks and Oakland Raiders playing the initial NFL game at the new stadium.

To accommodate the NFL, the stadium will have the Premier League’s first retractable pitch, allowing the Spurs to play on a grass pitch, and the NFL to play on a turf field. The pitch will be stored on three independent sections and 33 trays, stashing itself safely under the south stands. The conversion from pitch to turf will only take around 25 minutes, enabling turnover to happen rapidly.

The club also worked closely with the producers of U2’s tours to ensure that the building has the best acoustics anywhere, helping accelerate the organization’s ambition to have the building in use throughout the year.

For fans at all levels, match day should be an experience to be remembered. First off, the building has worked on solving two important issues of modern in-stadium attendance –  lines and Wi-Fi.

Tottenham Hotspur Stadium will feature a retractable pitch, allowing the Spurs to play on a grass pitch, and the NFL to play on a turf field.

Tottenham Hotspur Stadium will be an entirely cashless building, a move designed as a way to cut down on lines and get people their food and beverage as quickly as possible.

To ensure that fans are connected and can tweet and stream at will, the club has partnered with Hewlett-Packard Enterprise (HPE) to build the most technologically-advanced stadium in the world.

“Creating a technology infrastructure to support an enhanced visitor experience requires solutions that can meet the growing demands of visitors that come to our new stadium,” says Sanjeev Katwa, Head of Technology for Tottenham Hotspur.

Marc Waters, Managing Director, UK and Ireland, at HPE adds: “Tottenham Hotspur realizes that being digital from the ground up is imperative to transform its fan experience.”

Building the stadium with technology at the core from the start is part of the team’s plan to extend match day from just the 90 minutes of the match to an all-day experience for fans that includes an on-site microbrewery, museum, skywalk, and over 60 food and drink outlets.

The Marketplace is a street food inspired emporium that looks to London’s diverse culinary scene, while also serving plenty of traditional fan favorites as well. Housed inside The Marketplace is the Goal Line Bar, which is being touted as the UK’s longest bar at 65 meters, running the entire length of the goal line.

Outside of these two destinations, the bright and open concourses will house 60 food and beverage options, including three feature bars, so every fan has a great opportunity to find something to eat or drink to his or her taste. And the stadium will also be home to the world’s first stadium microbrew.

The on-site brewery will be able to brew one million pints of ale annually, and with a special delivery system, will be able to pour 10,000 pints per minute to fans. No matter what kind of event the facility is hosting, the Spurs and foodservice partner Levy Restaurants will offer quality and consistency, including in world-class premium areas. 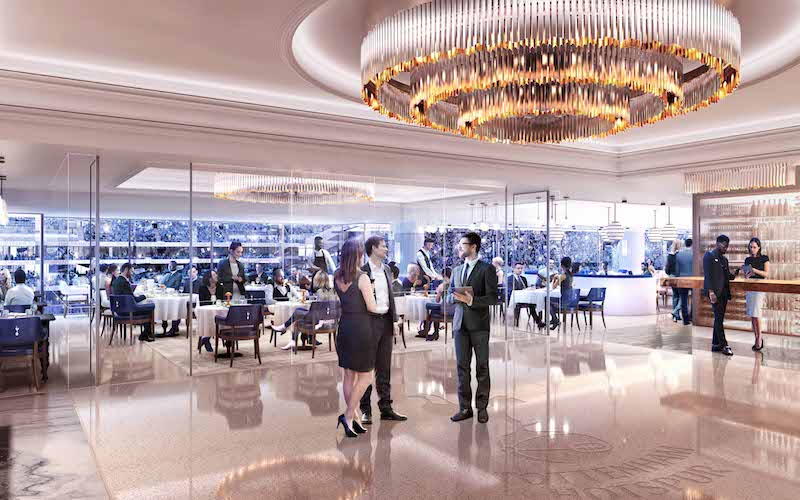 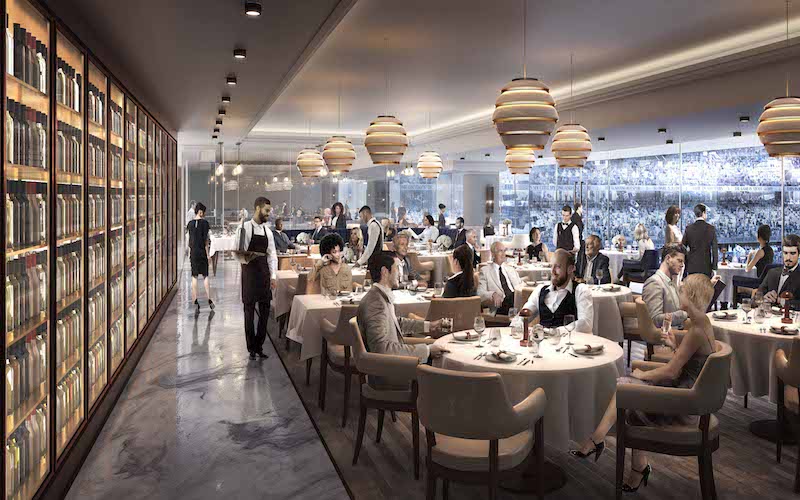 As a global center for banking, advertising, and other industries, premium seating and corporate entertainment will have a prominent place in the new stadium.

The Spurs have created a number of one-of-a-kind experiences. A highlight for many will be “On Four” – a collection of offerings that will redefine first-class entertainment. The collection encompasses three unique experiences that rival anything in the world: Super Suites, Super Loge, and the H Club.

The Super Suites are bespoke suites that hold up to 21 guests and offer Michelin Star-quality fine dining from chefs Michel Roux Jr, Albert Roux, Emily Roux, and Chris Galvin. The Super Loge is a first in the UK, allowing guests to experience the luxury and privacy of a suite with the experience of a bar and restaurant. The H Club is a private members club, designed as the pinnacle of Spurs’ premium offers, featuring at least five dining experiences.

“With the new stadium offering such tremendous premium and corporate options, this will encourage us to use the team as a strategic business development partner much more frequently.”

The H Club is also designed to be about more than food alone. It is about the entire experience, as the club has worked to provide a pre-match sommelier, private limousine service, a private members bar, and access to concierge service to help create an unbeatable membership offering.

Because the culture of football in the UK is such that even when business is on the menu, football is still a focus, each of these premium seating options come with optimal locations on the east and west touchlines and the most sought-after seats on the halfway line.

Another club designed to get fans closer to the players is the Tunnel Club. The Tunnel Club experience will be like no other in football. The glass-walled restaurant and bar area offers a unique view of the players’ tunnel and includes pitch-side seats that are located directly behind the home team’s dugout.

The pitch-side access is one of the most exclusive memberships in professional sports, limited to only 104 seats. Each package comes with premium dining, concierge service, and private shuttles to the ground.

Despite being in a city that has five Premier League sides, the unique nature of the new Tottenham Hotspur Stadium has driven demand for these new, exciting premium offerings. With an experience that will rival anything in European football and professional sports around the globe, attracting corporate and premium fans will now be much easier.

“In the past, we used White Hart Lane to entertain clients,” says Simon Mabb, Managing Director of Commercial Insurance with Romero Insurance Brokers Limited. “The Spurs have always done their events very well, making something done on a large-scale feel personal. With the new stadium offering such tremendous premium and corporate options, this will encourage us to use the team as a strategic business development partner much more frequently.”

With the stadium opening set for September, Tottenham Hotspur is frantically working to ensure that the building is ready to go at the start of the new Premier League season. Once the building is online and fans have the chance to experience a match for the first time, it is near certain that the stadium will live up to Chairman Daniel Levy’s statement: “It will be our new home for generations to come, and we want it to be exceptional.”

With so many new, state-of-the-art features inside one building, exceptional is likely to be right on the mark.