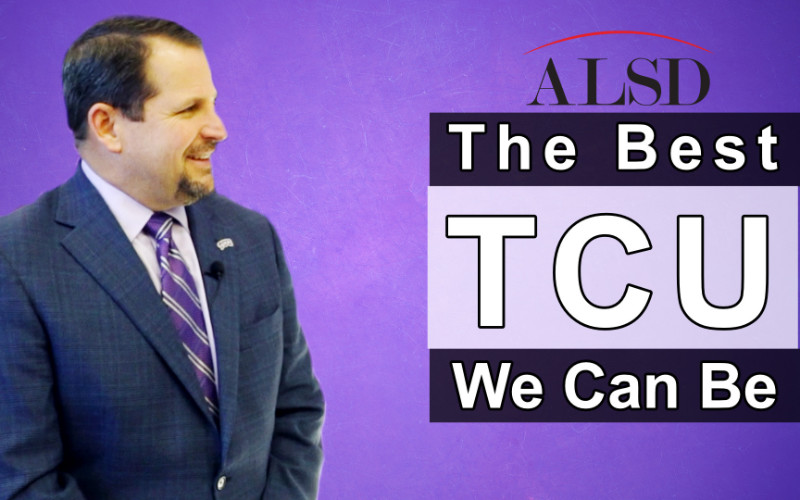 Can you orient our readers, let them know where we’re at presently, and inform them of the function behind this impressive space?

We’re in our entryway to the Ed and Rae Schollmaier Arena. Behind us is the Jane and John Justin Hall of Fame, which is a point to show off all of our sports and a chance to bring all of them under one roof, allowing for coaches to bring a focal point into their recruiting processes.

It’s one thing when you’re talking about football, men’s basketball, or women’s basketball. But golf, tennis, rifle, equestrian, and all of our other points of pride that are associated with the athletic department are featured [in this hall of fame].

It’s an important piece for us to show off. It’s a recruiting tool. Recruiting helps beget winning teams. Winning helps beget a donor base and a fan base, so it’s all related.

“When you bring in high-quality student-athletes, who are good in the community, good on the court, good on the field, you create winning programs, and therefore, your fan base grows which then leads to a donor base to help fund these facilities. It’s a continuous cycle.”

We’re all aware of the facilities arms race across conferences across the country. How do all of your facilities help recruit both of those segments, donors and student-athletes, at the same time?

For us, it starts with our student-athlete experience. Everybody wants to win, and you win when you get better, higher-quality student-athletes in your programs, and you do that with recruiting. And so that lends to the arms race that we see.

We want to put on the best face for TCU that we can. A lot of that is in how we put together our facilities so coaches have the resources to recruit student-athletes. When you bring in high-quality student-athletes, who are good in the community, good on the court, good on the field, you create winning programs, and therefore, your fan base grows which then leads to a donor base to help fund these facilities. It’s a continuous cycle. What came first, the chicken or the egg? I’m not sure, but they’re both important to our programs.

You’ve been successful with a multitude of capital projects throughout the last decade. But remaining here in this building to get started, what has been done in this arena from a renovation perspective?

We kind of created a very large donut around the existing facility. We did a lot inside of the arena as well. We lowered the floor level, created some lower level and courtside seats, created some different sightlines, created some different spaces. There’s a space downstairs, a courtside club, that we created with donor access. Those were all pieces that played a role in how we funded the project. But then on top of that, we incorporated the hall of fame, expanded concourses, better fan environments, and easier access to concessions and restrooms.

In addition, we also created office space for our Frog Club development team, our ticket office, and all of our other coaches and support areas. As the program grew, we were able to bring those offices back inside. Our student support service areas are attached now with our weight room, our training rooms, and locker rooms for our basketball teams. All of this stuff falls under one roof. 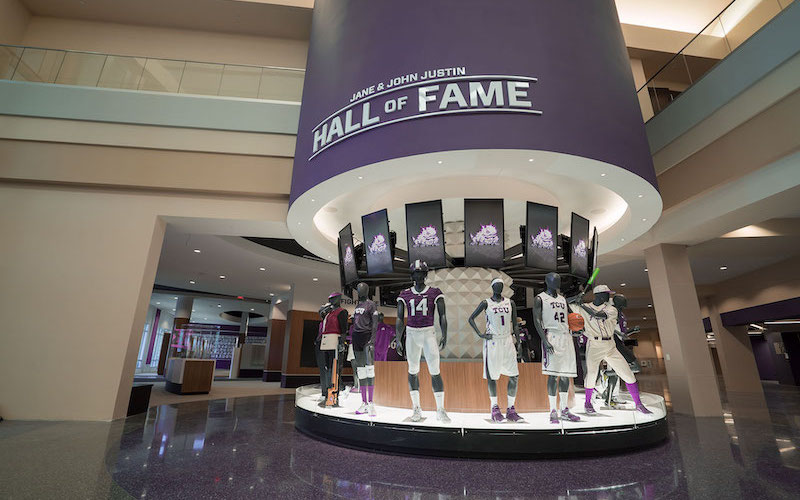 What’s always been impressive to me about TCU is the fact that while you’re not a big state school with as large of a quantity of donors as those bigger schools, you still remain competitive from a facilities standpoint with those larger public schools. How are you able to do that?

“Regardless of what our competition is doing, we want to be the best TCU we can be. We’re going to design and build and put facilities in place that are best for TCU.”

First of all, regardless of what our competition is doing, we want to be the best TCU we can be. We’re going to design and build and put facilities in place that are best for TCU, competition aside. But with that, yes, we are a private school. Virtually all we do is going to be based on donors, so we’re cultivating those donors every project, trying to find more and more people, but what we lack for in quantity, we have been able to make up with quality.

As you walk around and see our facilities, what’s important to us is that we know they’re being built, designed, and put into play with donor resources. We have to do the best we can with those resources. We take a lot of pride in bringing those current donors and potential ones back in to say hey, this is what we did with the resources you provided us, and we want you to be happy with it, not only happy today when it’s opened, but in 10, 15, and in some cases, 20 or 30 years later when it’s still well taken care of, and they’re more inclined to potentially come back and support us again if given the opportunity.

From a strategic and tactical perspective with each new project, how are you going back to similar donors to ask for contributions?

Again, it goes back to that quality donor that we’ve had who has been so supportive of all of our programs. But at the same time, we’re also trying to engage in projects to find the next up-and-coming donor, the next generation that can help support the programs in the way some of the names that you’ve seen on these facilities have for many, many years.

For instance, in our Amon G. Carter Stadium expansion right now, the target of that [project] is that next level of donor and giving several different entryways for them to get in and support the facility. It could also open doors in the future to supporting other programs and other facility projects that we may have come along. 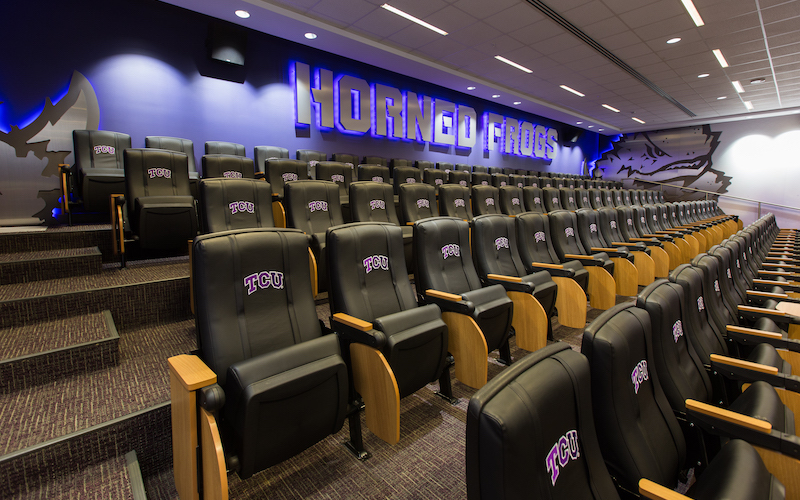 What are the signature elements of the aforementioned expansion happening currently to the east side of Amon G. Carter Stadium?

Well, obviously just the grandiose stature of it, and we really don’t affect the current seating bowl. So that in itself is a huge feature of it, but there’s also the fact that we’ll now have club space that can be used for multiple activities besides just a football game day. It’s large enough to have a 600-700-person banquet inside of it that also has a phenomenal view back over campus and back over downtown Fort Worth. There’s a balcony that can be used for different events, so it’s going to be a much more multipurpose facility for us where we can entertain various events. It’s not just an athletic facility.

What’s the breakdown of premium seating being introduced with this renovation?

Premium seating is a large part. I believe there are 20 suites, which will be on the upper level. We’ll have roughly 1,100 club seats and then 48 loge boxes. An interesting part about the loge is it is also going to come with its own private club space. Each end of the facility, that’s where the loge boxes will be, will be adjacent to the club and below the suites. They’ll also have access to their own private bar, buffet, and restrooms. So there’s three different levels – the club experiences, the loge experience, and then there’s the suite experience.

What industry trends and research did you look at with your design-build team to help inform your premium seat choices?

Well, there’s a lot of pieces to it, but a big part of it was development, determining what there was a market for, what our donor base could support and was willing to support, and what kind of amenities they were looking for.

“We’ll now have club space that can be used for multiple activities besides just a football game day. It’s large enough to have a 600-700-person banquet inside of it that also has a phenomenal view back over campus and back over downtown Fort Worth.”

As we opened the first [renovation] iteration of the stadium in 2012, there became more and more of a market for not only club seats, but also a growing donor base for suites, so we knew that we needed to find several different options. We couldn’t just say here’s 20 one-size-fits-all suites because not everybody’s able to come in at that level. Some wanted the entry level to a club seat or maybe even the next step to a loge box.

Then we also took a hard look at one of the things we struggle with here a little bit, which is heat, particularly early [in the season]. We’re in North Texas, and that part of the stadium faces due west. As that afternoon sun comes down, it’s warm. So we looked at a lot of different ways that we could enhance the experience knowing that we’re going to balance one or two really warm, uncomfortable days every year, as television dictates game times.

We did a lot more research into how to mitigate [the heat] and make it a great experience for them. We put in different types of fans and HVAC elements that will help, and again, mitigate those circumstances that we can’t control. We can’t control the weather. But we can make it an amenable process for the fan base and the donors that want to sit and enjoy the game. 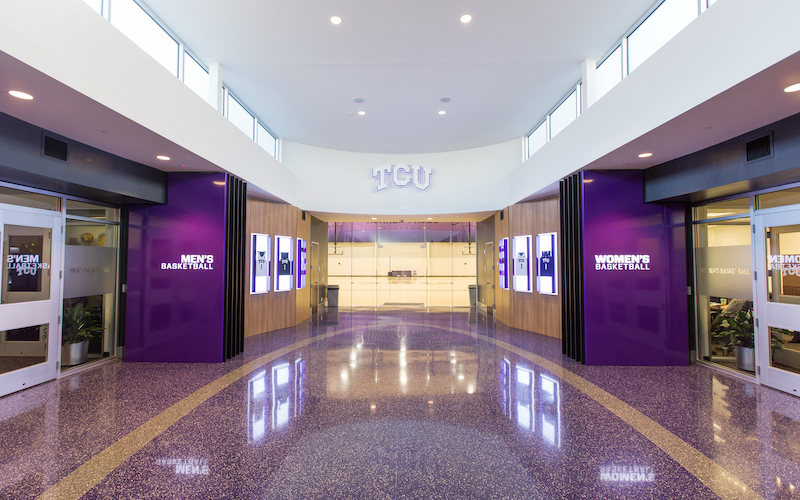 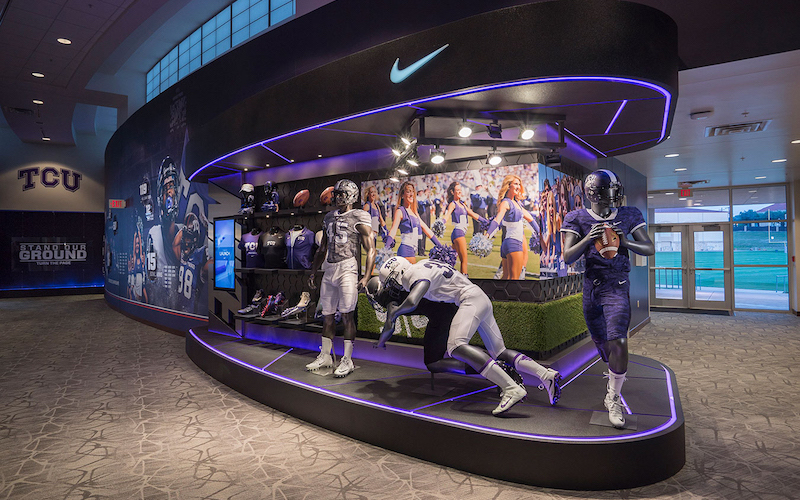 Ok, last question. What changes are your development officers making in trying to reach and sell to those new donors buying into the east side?

We went to donors in 2009, ’10, and ’11 for the 2012 [renovation] opening of Amon G. Carter Stadium. Those younger couples have become more established, and those families are more pronounced. They’re better off financially. We already had a huge waiting list of people that wanted to get in line to get into club spaces, and we needed to find an opportunity for them to spend that money. If we didn’t have an answer for them in the next couple of years, they were going to take their money elsewhere and spend their entertainment dollar on someone else.

So those people that were already at the ground level, they’ve gotten older, become more financially stable, and are in a better position to support us. Most importantly, we’ve continued to be successful on the field. Obviously, if we don’t have success on the field, the donor part of it is very difficult. All of those things continue to happen, and then we listened to our fan base, the things that they wanted, and we’re going to try and provide everything that we can that they’re willing to support.

We can’t control the sun out of the west, but we’re going to do what we can to try to help with that. We’re going to be able to provide them with a first-class environment. And also knowing that this ticket holder or this donor may be a little bit younger, there are some amenities that are going to be inside the facility. There are a lot of different technology changes. You’ll see more open space, more video boards, more technological elements that people are looking for if they spend their entertainment dollar to come sit in the stadium and enjoy the football game.

Go Inside the Jane & John Justin Hall of Fame at TCU