Dubbed the epicenter of college basketball, University of Dayton Arena is in the midst of a three-phase, multi-level renovation that's transforming the venue from floor to ceiling, but while protecting its sentimental appeal. 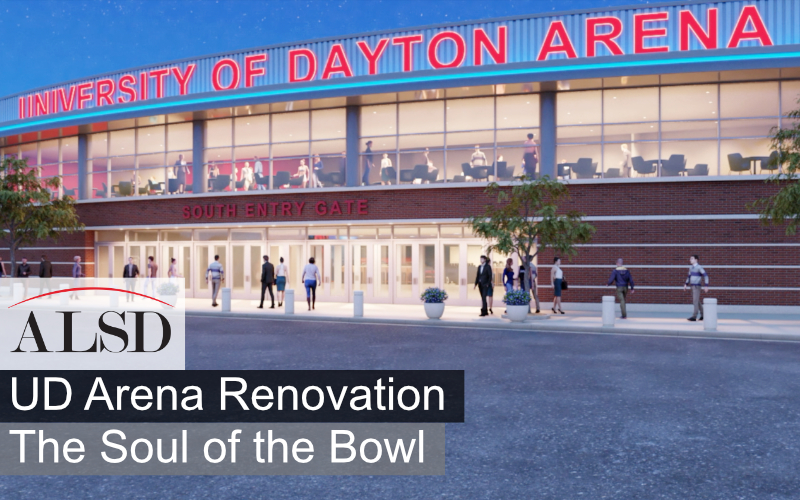 So when the University of Dayton decided on a large-scale overhaul of its basketball arena, it was widely understood that while upgrades should be comprehensive, they also needed to comply with an existing deep sentimentality for the facility. From wing to wing, the Dayton Flyers now have a home up to modern codes and standards for fan experiences with the same soul of the past five decades.

The second of three phases for the approximately $75 million renovation was unveiled at the start of this college basketball season in November. Highlights include an expanded concourse, upgraded infrastructure, better ADA-seating options, and a more robust premium portfolio.

“In the case of UD Arena, what we really looked to do is offer new inventory in terms of premium environments, but we also looked closely at the distribution,” says Lindsey Peckinpaugh, Principal at Perkins+Will, sports designers on the project working with Hastings+Chivetta, the architect of record.

“We wanted to bring fans down a lot closer to the action.”

“We wanted to bring fans down a lot closer to the action,” adds Courtney Long, Director of Ticketing and Premium Seating at the University of Dayton. “So we’re going to have four Terrace Suites in the corners of the court.”

Each of these Terrace Suites consists of two main sections – a private entertainment area similar to a traditional suite and a balcony that overlooks the court and is among the spirit of the seating bowl.

The private area is furnished with televisions, well-appointed seating, as well as updated graphics and visual design elements. The terraces feature fixed seating in addition to high-top and bistro tables. These areas are meant to be high-profile, displaying patrons above the crowd and giving them an intimate view of the court. 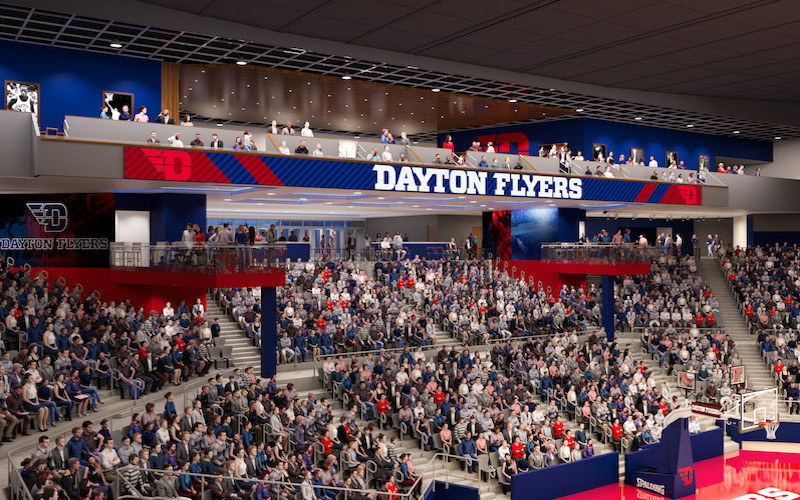 Four new Terrace Suites (one in each corner of the bowl) provide a new offering at UD Arena. All renderings are courtesy of University of Dayton Athletics. 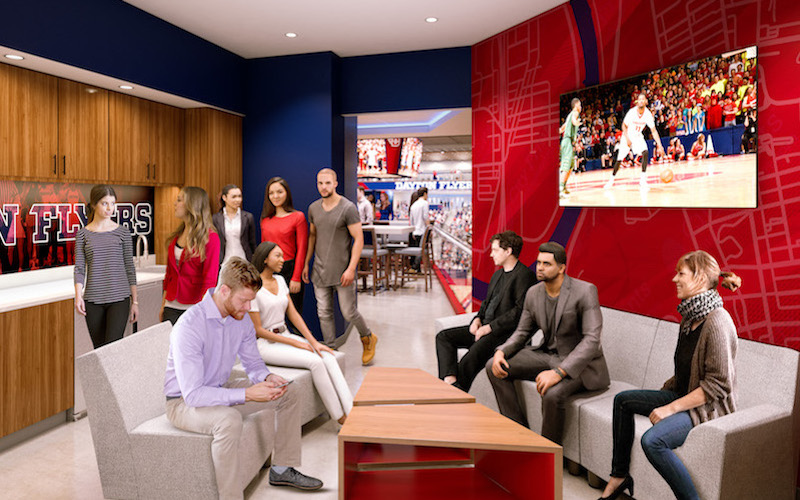 Terrace Suites include private entertainment spaces, furnished with plenty of FF&E amenities, that spill out onto balconies in the heart of the seating bowl.

Spacious, padded club seats are also being added on the sidelines of the arena, conveniently located near entrances to the concourse on the arena’s mid-level.

“Here, you’re going to find the most legroom in the arena,” says Long. “Club seat patrons will also have access to our two club lounges… in what used to be the west wing and the east wing.”

The clubs are also available to Flyer Front Row members and select high-end donors and will feature full bars and mounted screens. Setting the food and beverage menus will be a collaborative effort between the arena dining services staff and the club members themselves.

Overlooking the University of Dayton campus bisected by the Great Miami River is the new 400-level landing space, an outcrop of the arena being reworked into a social viewing deck. When completed, the deck will be flanked by a single row of seating, a drink rail, portable F&B stations, dedicated restrooms, and a great view of the bowl with screens overhead. An east-facing panoramic window complements a spacious open area with an added bonus of curb appeal.

“For the first time in the arena’s history, you’re going to get a sense of the activity going on inside [the arena] as you come up Edwin C. Moses Drive,” says Peckinpaugh.

ADA-seating distribution has also been a point of focus for the UD Arena team, including within the 400-level landing, which will be accessible via a new elevator. 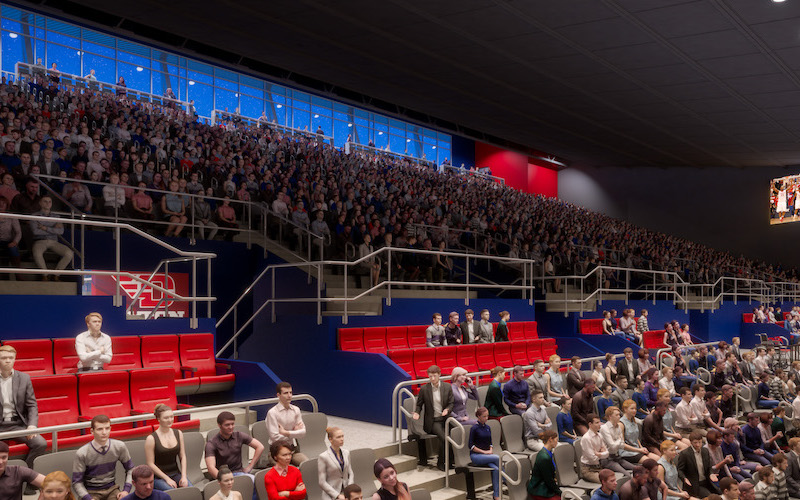 New club seats located at the mid-level of UD Arena offer patrons easy access to the concourse and new club lounges on the east and west sides. 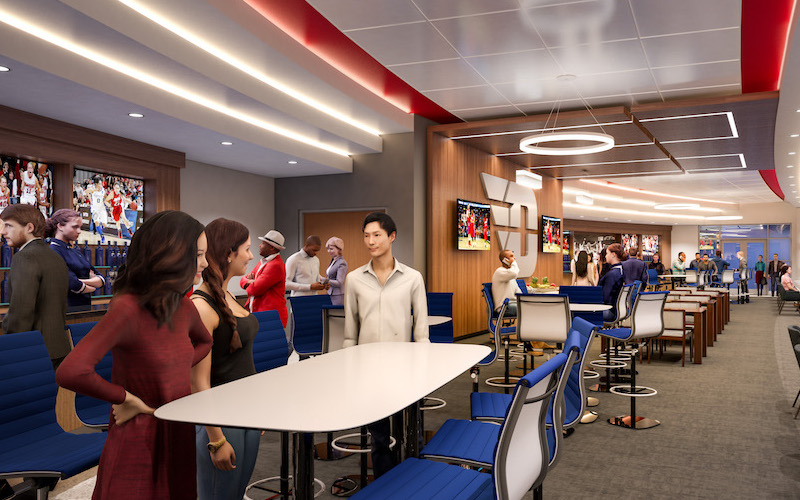 Food and beverage menus in the new east and west club lounges will be set by the dining services staff in collaboration with club member input.

A crown jewel of the renovation is the newly-expanded 360-degree concourse, allowing easier navigation, traversal of the facility, and operational efficiency.

Peckinpaugh notes, “The fans are going to flow through the facility much better. They’re going to have access to distributed restrooms and concessions, so queuing will be diminished.”

UD Senior Associate Athletics Director Scott DeBolt is particularly excited about relieving former chokepoints. Connecting areas with high ceilings and wider walkways are being constructed and additional paths have been rerouted for an easier flow.

But there aren’t just surface-level changes in this project. The design-build team has taken the term “gutting it” literally, ensuring that the inner workings of the building will be sound for the long haul.

“The condition of the infrastructure is a consideration,” says Peckinpaugh. “Some of the piping and mechanical systems are 30 years old, so we certainly had to invest time and consideration into those to future-proof the facility and ensure that things are going to be sustainable for another 30 years to come.”

The team also deployed modern technologies to make the building more energy efficient, adding things like new LED lighting. They also took advantage of the arena’s proximity to the river and installed geothermal wells which will allow the building to be climate-controlled for the first time in its history. All of these considerations account for operational implications and consumption around the facility.

The University of Dayton likes to call itself “the epicenter of college basketball.” And with the renovation to UD Arena, it intends to keep that reputation.

UD Arena has hosted the Opening Round games of the NCAA Tournament, now known as the First Four since the tournament field expanded to 68 teams in 2011, for 18 years. Bearing in mind this rich history, the renovation team made sure to consult the right parties as they embarked on the project to ensure they had the right inclusions.

“This facility is special. It really has a sentimental environment and a strong fanbase that is protective of that environment.”

“The NCAA provided us with nine items, everything from upgrading the locker rooms, to more premium seating, to some more flexible areas,” DeBolt says. “We’ve incorporated all of those into this project, which makes us pretty excited.”

The project is being completed in three phases. Phase One, finished for the 2017-2018 season, included updated ADA seating, a new four-sided, center-hung video board, new LED ribbon boards, as well as upgraded audio and broadcast technology. Phase Two, finished for this 2018-2019 season, focuses on the Eastside Club Seats and Terrace Suites, a new team store and box office, upgraded restrooms, and other points of interest throughout the concourse. Phase Three, scheduled for completion in November 2019, will see the implementation of climate control, lighting, and Wi-Fi upgrades, locker room and training room additions, and the Westside Club Seats and lounge.

In the early stages of the planning process, season ticket holder focus groups very clearly told the project team, “Don’t mess with the soul of the bowl.”

Perkins+Will has kept that instruction in mind in partnership with the passionate staff at UD Arena. As Peckinpaugh notes, “This facility is special. It really has a sentimental environment and a strong fanbase that is protective of that environment. So our goal coming in… was to figure out how to honor the sentimental environments… while really bringing them up to modern-day standards.”

Watch our entire video series chronicling the three-phase renovation to UD Arena which includes a behind-the-scenes hard hat tour and exclusive interviews with project stakeholders key to its architecture, operations, and premium seating.