Yes, It's a Story About Pricing, But It's Really About This

The much-discussed Fan First F&B program at Mercedes-Benz Stadium feeds a family of four for under 30 bucks. And that's a story. A good one. But what lies behind the headline numbers is where sports business professionals should focus.
By Jared Frank, ALSD 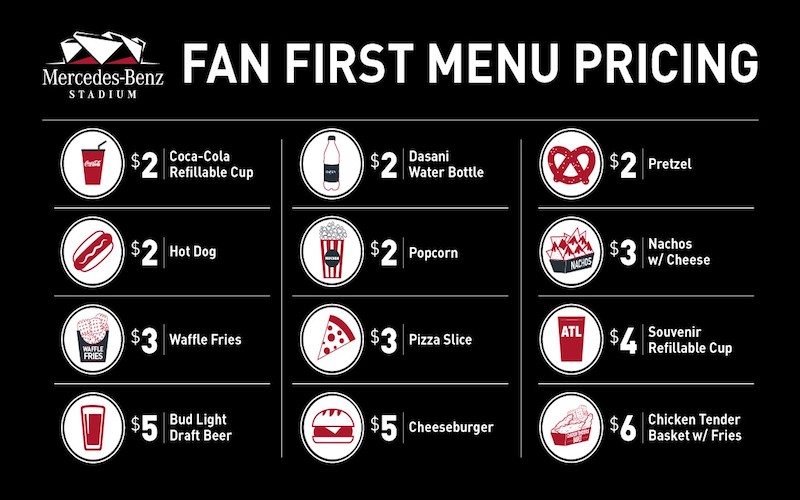 In January, AMB Sports & Entertainment, parent company of the Atlanta Falcons and Atlanta United, revealed some of the results for its Fan First food and beverage pricing model after the first season in the $1.6 billion Mercedes-Benz Stadium. The program, implemented from the general admission areas all the way up to the premium clubs, was and is a first-and-only-of-its-kind in the industry.

And by many accounts, it was successful in 2017. Mercedes-Benz Stadium scored first for food and beverage in the NFL’s Voice of the Fan survey, up from 18th in the league during the final season at the Georgia Dome. In final summation, average spend per fan at Falcons games increased 16% year-over-year despite a 50% drop in food prices. Volume increased 53%. The numbers look good.

But the more layers of the onion that peel back, the less the story becomes about pricing. This story is about intelligent design.

When designing Mercedes-Benz Stadium, the Falcons looked at their Voice of the Fan survey results and observed a convergent and concerning set of data. Fans clearly stated the importance of food and beverage to their overall gameday experience, while also rating it among the lowest of all attributes tracked.

“We had to do something different. Otherwise, how were we going to see different results?”

“We had to do something different,” says Mike Gomes, Senior Vice President of Fan Experience for AMB Sports & Entertainment. “Otherwise, how were we going to see different results?”

So the organization devised its Fan First pricing ($2 hot dogs, $3 pizza slices, and $5 cheeseburgers at professional sporting events are certainly different). But then came the hard part – designing the infrastructure needed to absorb what surely would be increased demand.

To get started, designers broke down the stadium concourse by concourse, quadrant by quadrant, re-engineering everything from storage capacity, to cooking capacity, to refrigeration capacity, to replenishment models, and ended up with a system capable of vending higher volumes, but without sacrificing food variety, quality, or speed of service. 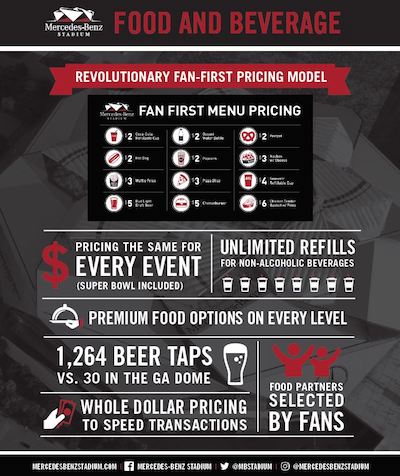 Lowering price increases demand. That’s Econ 101. But what took industrial engineers (literally) to figure out was how to keep lines short and moving fast in the face of that increased demand.

“Something as simple as condiment stands,” says Tom Crocker, Vice President of Hospitality & Strategy for Levy Restaurants at Mercedes-Benz Stadium. “It took a lot of effort and design to figure out where to place them.”

Next came the task of studying five different sets of queue designs. AMB Sports & Entertainment enlisted the services of Georgia Tech’s Industrial Engineering program to model concession stands and eliminate inefficiencies. After optimization loops of testing, measuring, retesting, re-measuring, the engineers created a singular queue design that was implemented at all concession stands to process lines faster, while not causing pinch points in the concourse.

“We even looked at ergonomics, the reduction of motion and movement for our frontline folks,” says Crocker. “We tried to limit the number of steps they have to take to fulfill transactions.”

Ergonomic efficiencies. Different food preparation assembly lines. Whole dollar pricing. Smaller menus that eliminate the paradox of choice. All mean a few seconds less spent in line. When multiplied by 70,000 fans, they can make the difference on that Voice of the Fan survey.

It’s Not Just the Food

Fans won’t find soda at concession stands in Mercedes-Benz Stadium, only cups. And only one size cup.

“It’s amazing how much positive feedback you get after you make one, little, tiny change.”

“We measured that it takes between 13 and 17 seconds to fill up soda, first because you have to grab the right cup because you sell different sizes,” Gomes says. “We don’t have to offer different sizes because [our beverages] are unlimited, all-you-can-drink, so we don’t need a small, a medium, and a large.”

Mercedes-Benz Stadium is by no means the first venue to sell bottomless soda. But at other venues, fans have to get back in line.

“Every person who gets back in line is not adding more revenue,” says Gomes. “They’re just trying to get their free soda. Moving it to self-service, we added more value, we took you out of the queue, and we save 13 to 17 seconds every time.”

Active listening and surveying have already resulted in improvements. Due to fan requests, lemonade, pink of course, was added midstream to the soda fountains.

“It’s amazing how much positive feedback you get after you make one, little, tiny change,” Crocker says.

Fan First pricing extends to beer (12-ounce domestic drafts are $5; 20-ouncers are $7), but not to liquor, as a security and safety precaution. On the liquor side, a stadium-wide liquor pouring system ensures absolute quality (it’s impossible to under-pour), perfect mixing, and, again, shorter transactions. 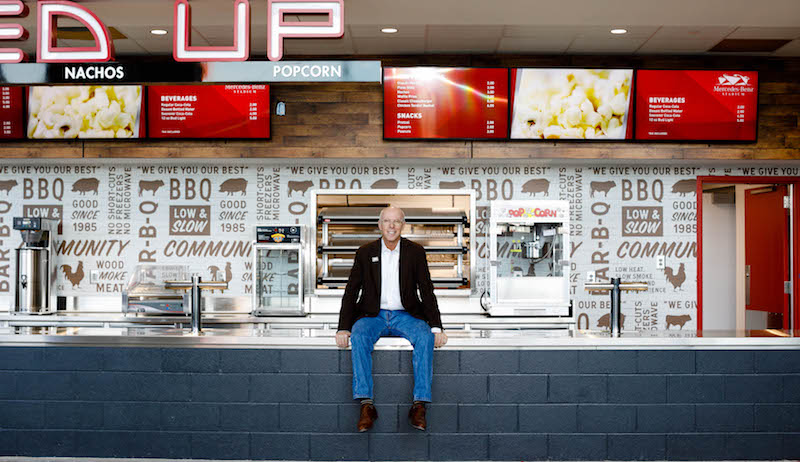 Rich McKay, President and CEO of the Atlanta Falcons, enjoys the positive early returns from the Fan First pricing at Mercedes-Benz Stadium.

Thinking Out of the Box

Using detailed data analytics, AMB Sports & Entertainment built demand models for every single concession stand. Refrigeration was found to be the limiting factor in most of them. After all, only so many chicken fingers fit within any finite space.

Ironically, with all those analytics, it’s another simple solution that yields significant results.

“We’re using food and beverage as a strategic lever for our total business objectives by creating a long-term view, not a 2017 view, of profitability for a stadium that’s going to be here for 30 years or more.”

This season, the Falcons averaged approximately 200,000 food and beverage units sold per game, 140,000 units just by the end of the first quarter. That’s a lot of chicken fingers. Compare that to 130,000 total units during the last season at the Georgia Dome.

During the College Football National Championship Game, NCR, the point-of-sale provider in Mercedes-Benz Stadium, cited its highest number of transactions (over 120,000) ever executed in any of its sports and entertainment venues. The second highest? The Florida State-Alabama game hosted at Mercedes-Benz Stadium four months earlier.

So predictably, the cheaper food prices resulted in mega increases in volume. And while not claimed as a loss leader, Fan First pricing is anticipated to encourage repeat visits from fans who might otherwise not come back.

“If you look at the key drivers of the fan experience, several of them don’t drive positive,” says Gomes. “They drive dissatisfaction. We wanted to eliminate those pain points that would cause you to say ‘I’m not going to go to Mercedes-Benz Stadium even though I’m a fan of the Falcons’. That’s the strategic value of doing this type of food and beverage program for our fans.” 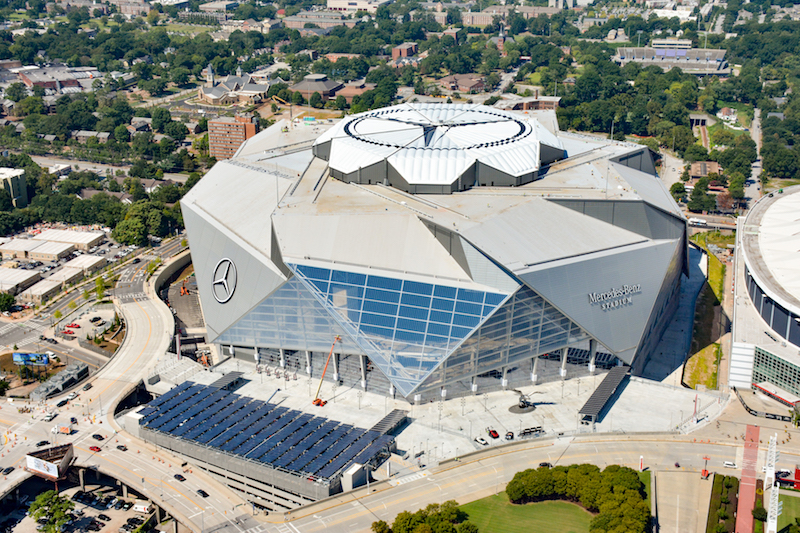 Fan First pricing at Mercedes-Benz Stadium is a good story. But it's the intelligent design and engineering behind the headline numbers that made it happen.

It’s unclear if higher gross sales led to higher net profit, but margin compression seems likely. AMB Sports & Entertainment being a private company, there are limits to how far under the financial hood we can look.

We do know that this Fan First program is different from the typical model where a concessionaire buys the F&B business from a team owner. In Atlanta, Falcons and Atlanta United Owner Arthur Blank put up the capital for all equipment and expenses in order to keep a higher percentage of revenue. Levy Restaurants is paid an undisclosed management fee.

Will it work elsewhere? Maybe not, and not because of the pricing variable only, but because the success with pricing is contingent on success in design, unlikely in most existing buildings without cooking and storage capacities needed to accommodate spikes in demand.

“This facility was designed for this model,” says Crocker. “It’s not something that you can just go kick the tires and throw into any building in the country.”

The beauty of a statistic is in the eye of the beholder. But a 16% year-over-year increase in average spend per fan at Falcons games despite a 50% drop in food prices impresses. And AMB Sports & Entertainment doesn’t seem to care if it’s sacrificing margin, instead playing the long game, where if you treat customers well, they keep coming back, and you end up making more money over time.

“We’re using food and beverage as a strategic lever for our total business objectives,” says Gomes, “by creating a long-term view, not a 2017 view, of profitability for a stadium that’s going to be here for 30 years or more.”

All artwork is courtesy of AMB Sports & Entertainment.

Explore all the design elements of Mercedes-Benz Stadium during ALSD 2018, June 24th-27th in Atlanta.