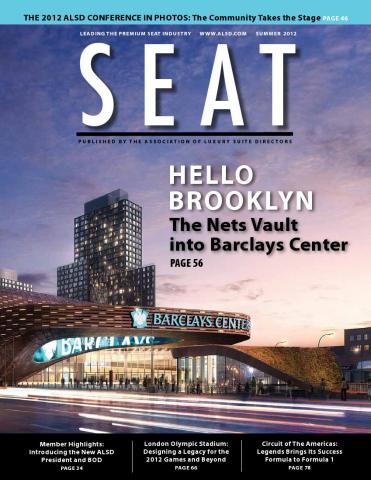 COVER STORY: THE NETS VAULT INTO BROOKLYN
After 35 years in New Jersey, the Nets are leaping over the island of Manhattan to a new sports and entertainment home in Brooklyn: the $1 billion Barclays Center, complete with a premium “Vault.”
BY JARED FRANK

ALSD 2012 IN PHOTOS
The 22nd Annual ALSD Conference and Tradeshow celebrated our premium seating community. Relive the memories with old friends and new.
PHOTOS BY SUITECAPTURES

DESIGNING A LEGACY FOR THE 2012 GAMES
Unlike many preceding Olympic facilities, now that the Games are over, London Olympic Stadium, designed by Populous, still has a useful, sustainable future.
BY GINA STINGLEY

MADE TO MEASURE
Two premium seating metrics – Return on Objective and Return on Investment – ensure a good fit for each buyer. But which one is right for you?
BY DR. PETER TITLEBAUM AND JACOB ROSEN

FORMULA FOR SUCCESS
Legends Sales & Marketing and the Circuit of The Americas, the first ever purpose-built F1 facility in North America, are bringing the most watched sport in the world to Austin, Texas.
BY TREVOR ALLISON

Whose World Are You Rockin’
BY BILL GUERTIN

MEMBERS ON THE MOVE

ALSD STAFF EDITORIAL
Editor’s Note: An apology for being a fan
BY JARED FRANK

ALSD MEMBER EDITORIAL
Don’t be afraid to sweat a little... or alot
BY MIKE GUIFFRE

About the Cover: Professional sports are returning to Brooklyn. Barclays Center, whose main tenant will be the Brooklyn Nets, opens on September 28th.