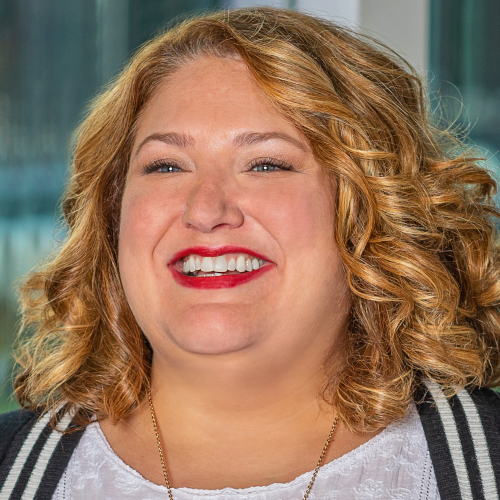 Erica really ought to walk around with a carpenter’s pencil behind her ear. Her German forebears wore pinstripe overalls: house builders, woodworkers, and craftsmen on both branches of the family tree. Erica thinks at scale like an engineer — but she also feels the intricate beauty and emotional intensity of the creative process.

With a degree in Interior Architecture, the last 20 years as a designer has manifested Erica’s twin passions of high-octane creativity and craft. At Burns & McDonnell, Erica joined to help establish a solutions-led design-build studio, engaging in partnerships to create purposeful human experience and crafted architectural encounters. The BMcD sport and performance studio is a unique, vertically integrated design team that is involved from investment planning to final fit out - and everything in between. In this studio setting, Erica positions Interiors as being integral to the success of every project, rather than an additional flourish.

Wherever she travels Erica finds inspiration in the work of her professional peers in hotels, restaurants and retail in locations as diverse as Las Vegas, Miami, Chicago and New York. Just as important are her twin loves — movies and music. She sees her work in sports as having a lot in common with movie -making. She often considers her next design move the way a director chooses a camera angle or a lighting change.  But it’s in music that Erica finds her emotional core. When she is in a venue or stadium waiting for the main act, she is struck with a shiver of anticipation. Erica is fascinated by the idea that, even if only for a few hours, people across all communities unite for a common love. These shared experiences are the deep well of her inspiration.

Capturing feelings, nurturing emotions, expressing beliefs – it’s in these intimate moments that Erica’s soulful craftsmanship finds inspiration. From here, she imagines the spaces that give us permission to reinvent ourselves. In Architecture that’s created for the totality of human experience, we can transcend the ordinary into the realm of the unexpected. It’s something Erica’s whole life has prepared her for.