A Hospitality Purchase is Anything but Transactional 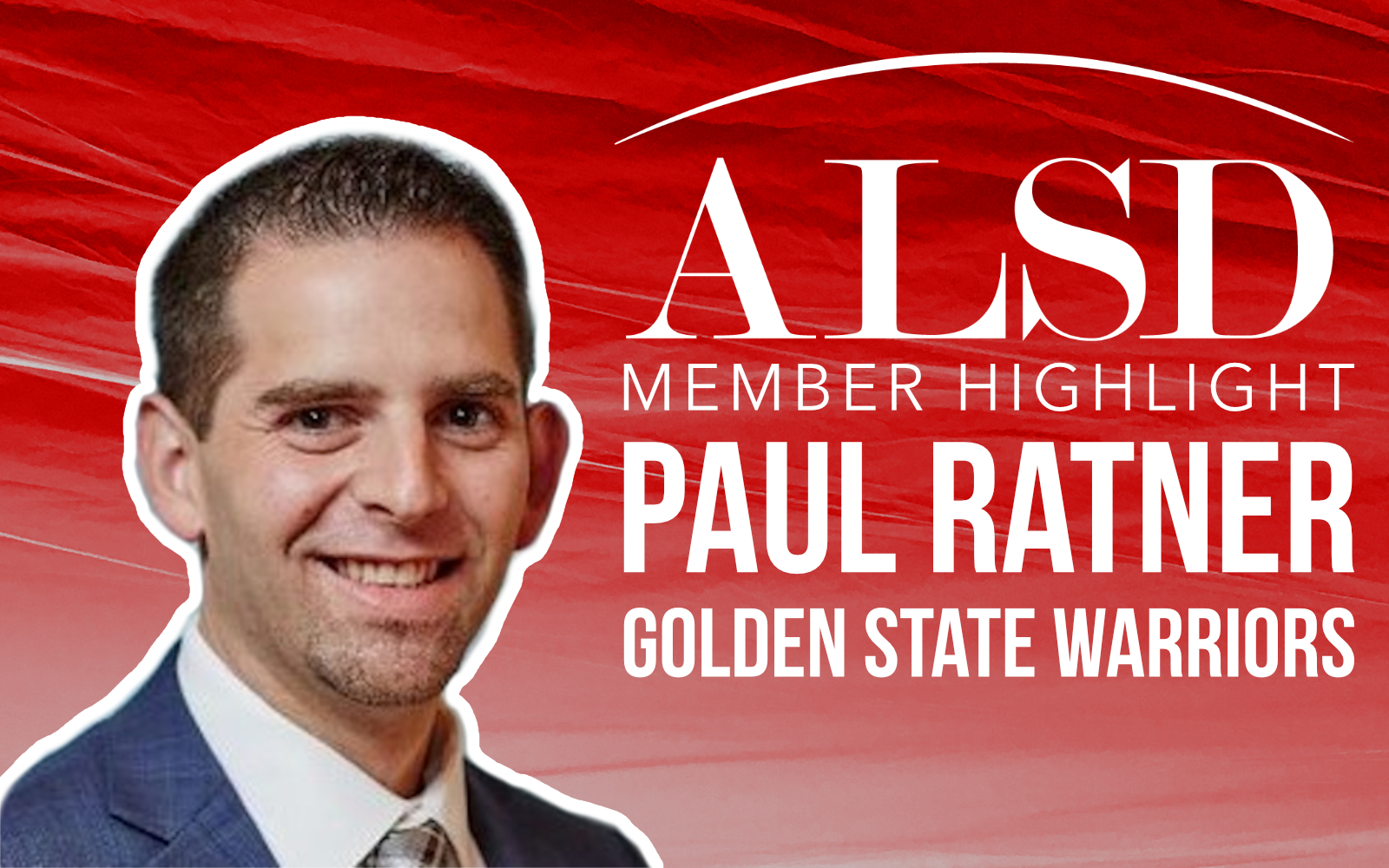 Briefly explain your background, and thus how you define hospitality and a premium experience.

Paul Ratner, Senior Director of Premium Suite Sales at the Golden State Warriors and Chase Center. I started my career wanting to be a sports announcer and I played basketball throughout most of my life watching my older brothers play. So, I kind of came into the world where I just wanted to work in sports any way I could, and I ended up really enjoying the business side of it once I got into the industry. I found that I enjoyed that much more than the actual announcing or media part of it, which was initially my goal.

Fast forward to today, I’m in my 17th season and my background has really been focused on B2B. I've gotten skills in networking with businesses and meeting C-level executives. I’ve learned how to understand business objectives and goals of a lot of different industries, especially on revenue generation. I feel like I can do a lot of good consulting work with a lot of different industries.

What's something new that the team has implemented recently that has had positive returns?

Coming from someone who had been selling premium for over a decade, I had a way that I did things and I think managers traditionally come in thinking, well, I'll just teach them what. But you learn that nobody learns the way that you do, and you have to learn how to teach people different things different ways.

I learned a lot of that from our new Vice President, Premium Sales & Service, Nana Yaw. He helped me to figure out the right way to build a process for our team. 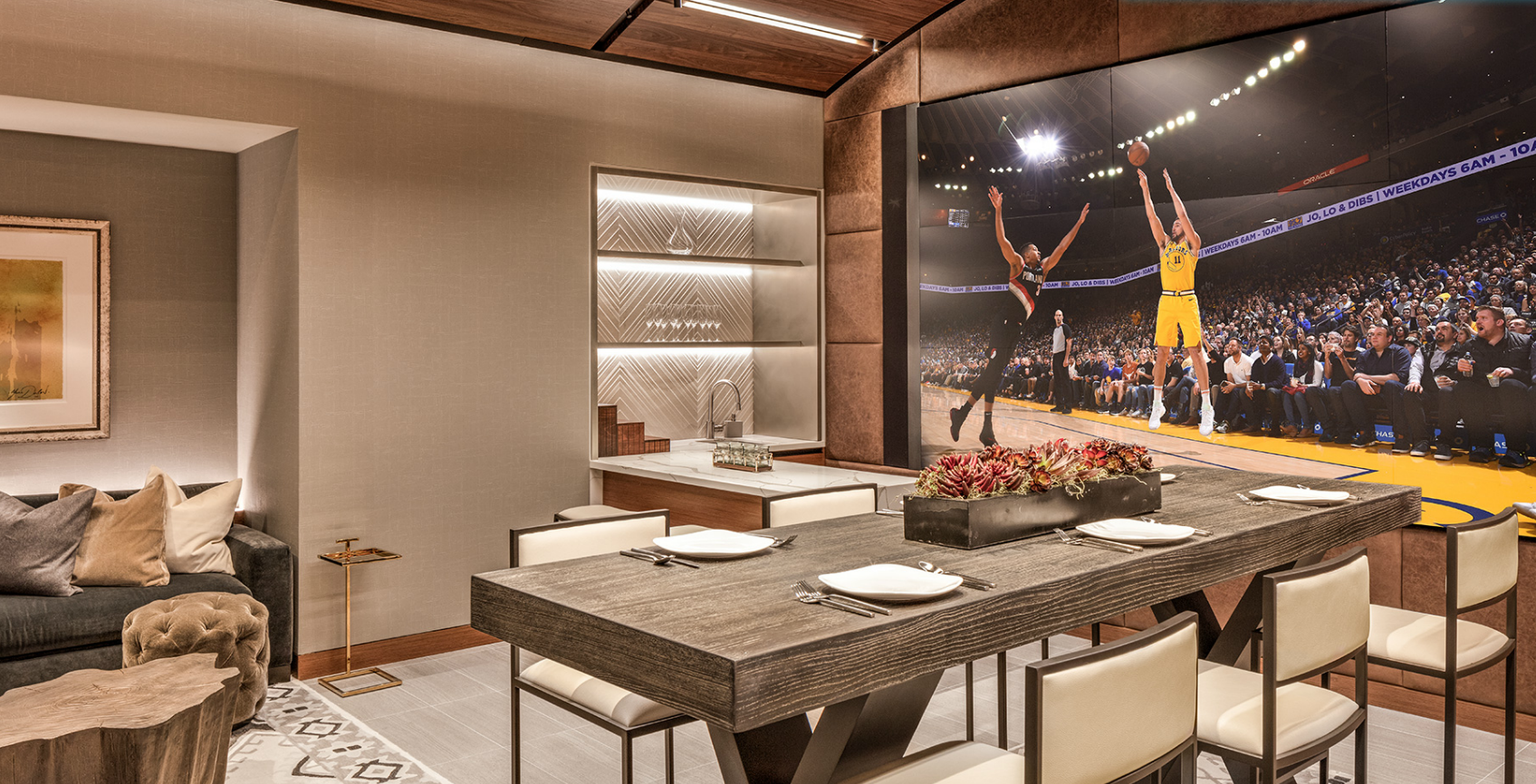 Another thing I credit mostly to Nana is that we really differentiated what it was to sell a rental for a game or an event versus owning a long-term lease. I’ve been talking about for quite a while is that tech companies are ahead of the game in how they structure their sales teams. It's more about who you're selling to rather than what you sell, and a lot of our processes in sports teams has always been that you sell tickets, you sell groups, you sell suites, you sell partnerships. But when you go talk to the business, like they just look at it as you're the Golden State Warriors. They don't care what product you focus on.

So, we changed our group a bit more to focus on not what you're selling, but who you're selling to. There's more than a transactional process, which is that individual rental, but then when you get into the conversation where you’re talking about a long-term lease opportunity. It's more of a partnership and it's a bigger commitment. There needs to be rapport. There needs to be trust. So, we built a process where we actually have a preparation that we do leading into the pitch. Prices are not pitched in the first call. We need to learn their business objectives. We need to have an internal meeting and build a proposal before price is ever conveyed to the client because we need to have seven-figure pitches and they need to look that way.

That's part of the conversation with our team who has been used to selling something in a transactional way. This is a long-term commitment, a partnership on a hospitality purchase is not a transactional purchase.

That is the one thing that we've really drawn a line in the sand on, not only in our department but organizationally. We are not out in the marketplace just saying what our terms are, what our costs are for our products. We're actually selling the whole opportunity.

We also have a great leverage point in that we own our own building, so we can take advantage of all the assets at our disposal.

Tell us more about building relationships with clients.

When we sold our new building before it was built, we lived off the fact this was a new shiny toy. We had also made it to the NBA Finals five straight years, and we were in the midst of that. We had a lot of momentum, and it was a perfect scenario for any sales team. It's a dream scenario.

But when you pull the curtain back and the doors open, it's not new anymore. So, we changed our process. It became more about the discussion, the touchpoints, and the details, as opposed to making sure every piece of the process was white glove. Granted, we focused purely on experience from start to finish, but I think, for example, the black car service was something that really lined up with the preview center.

What about the preview center? How was it utilized while selling?

We made sure we tried to have every bell and whistle when we designed it. We viewed other preview centers and discussed what we could do to iterate on it and make it better for our market. We had a lot of different technologies in our space.

One element that set the preview center experience apart was the black car service that brought guests to the tours. The tours were two hours from start to finish; we're asking people for a lot of time, and we wanted to make their day as easy as possible. We wanted the first touch point to be perfect.

In our partnership with Uber, we used Uber Black Car Service and we were sending cars to our prospects and/or our lease holders from our previous building. We had everything mapped out to the point where if it was raining, we had umbrellas by the front door and we were greeting them as the car arrived. We had somebody that was managing this black car service for us that was telling us when they were five minutes away and the salesperson was walking out with an umbrella if it was raining or greeting them as they walked out the door. We had meetings with Uber about where we wanted them to specifically drop people off. The whole process was extremely detailed.

Did the Preview Center stay open?

Our previous center which is still set up as it was. So, we can use it as an event space, if we wanted to do a private event, do a watch party, do some kind of a showing. We still have our model club suite and our model courtside lounge in there. At the other side is are unique branded items and we actually have cases we could put the trophies in. We have cases we could put our championship rings in, so we could still utilize that space. We have future plans down the line, but we have not enacted those yet.

And how do you see buying and selling habits and cycles evolving now?

The long-term commitment is a harder sale than it was two years ago. The pandemic created uncertainty and changes across companies’ behaviors. In San Francisco in particular, there was a big-name company that signed a 10-year office lease and then three months later paid millions of dollars to get out of it. That was like a stake in the ground; things are going to change. 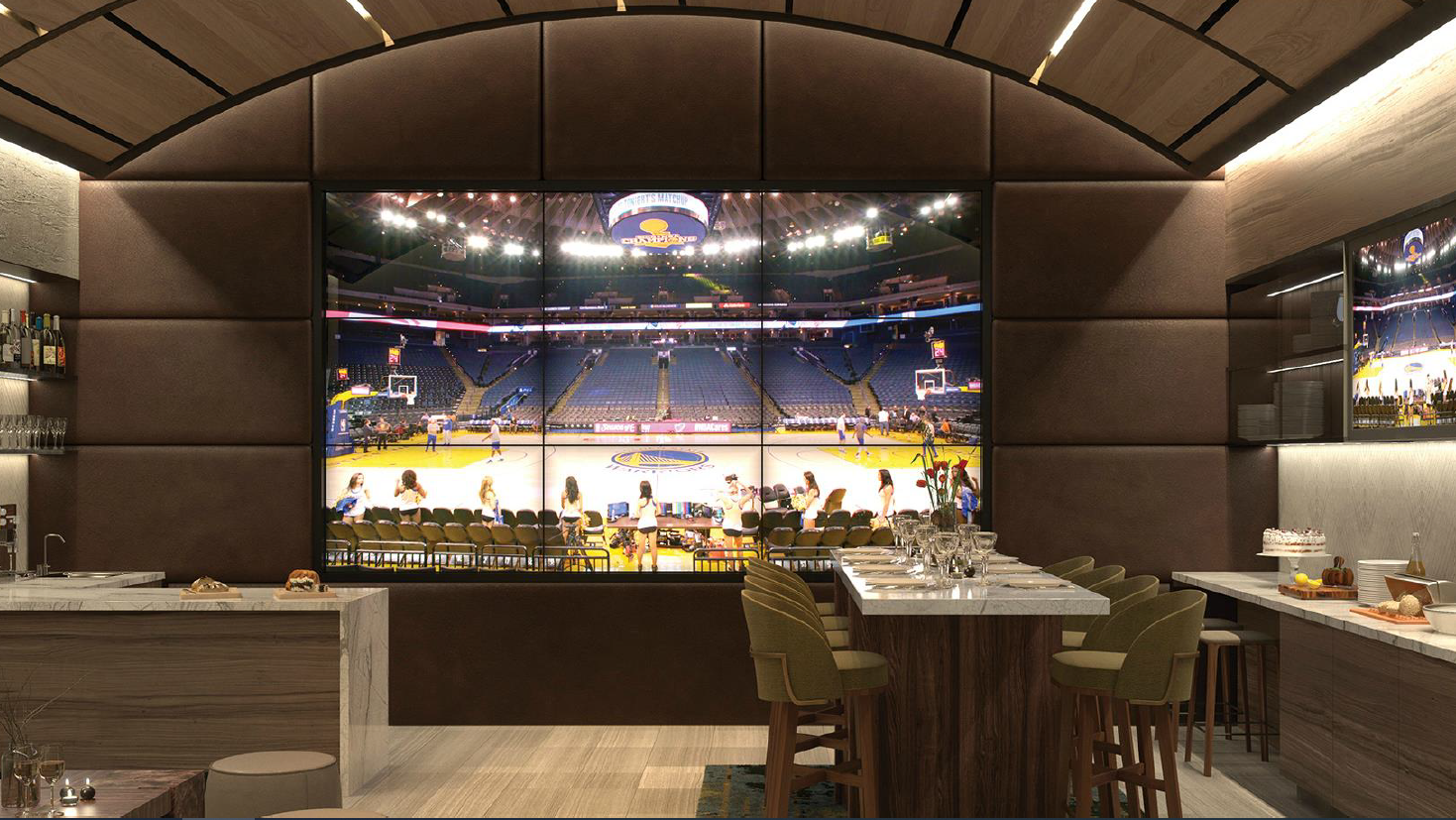 Going back to the question about how you change the rental versus the long-term lease model, it harkens back to the leverage point of owning our own building. We saw what was happening in the tech community, that a majority of the large businesses in our market were talking about executive briefing centers and that was basically their sales process.

In my background I learned a lot about how these companies try to drive revenue in their business. Their sales model most of the time was to have meetings in their office, bring the decision makers to walk through an executive briefing center, very similar to how we built preview centers. I've been in a few; some are immaculate. I realized that the cost of real estate became a huge part of the evaluating decision for a lot of these companies that at the end of the day, when we're selling suite leases, it's real estate. 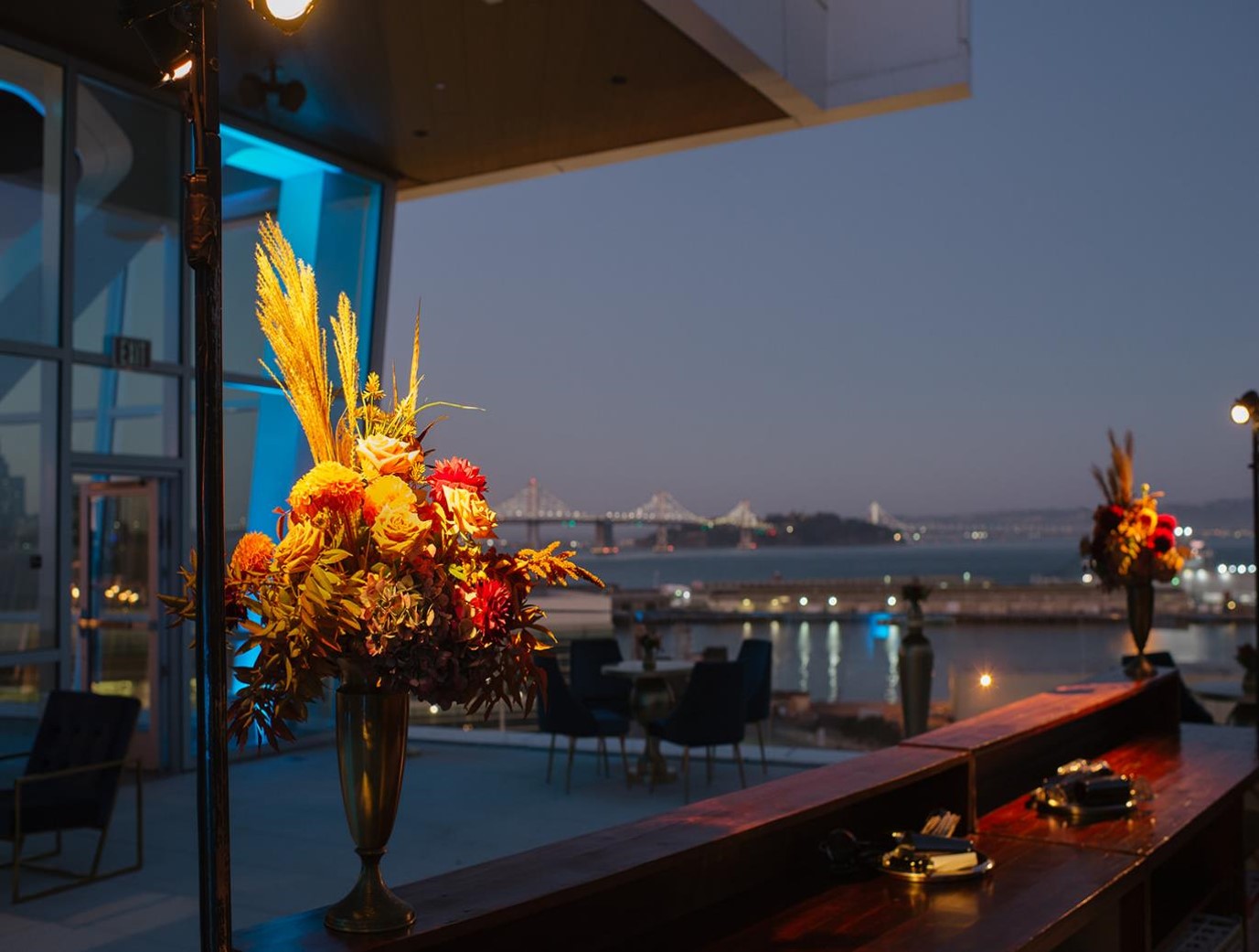 I think the conversation is usually thought of as, ‘Hey, I'm just buying tickets to an event.’ But the other side of the coin is, ‘Hey, we own our building.’ So, being able to offer somebody a secondary (or it could even be their primary) executive briefing center, is a conversation that we're leading with. We're not just talking about your entertainment budget, we're also talking about your real estate budget. And sometimes you’re office space, sometimes internal construction.

How is your venue or team enhancing the premium experience now and moving forward?

One thing that we were able to do the last six months (and I think most people in our industry would argue this) was hire a lot of people, and not necessarily from the sports world. Lois on our team is a great example of that. We built an amazing team. The team that I have is fantastic and I would argue that is allowing us to elevate our experience.

A lot of discussions we're having aren't necessarily just about what I'm going to sell you, but there's connections that our team is making with the people they're speaking with, continually trying to add value in every discussion, and I think that's a sticking point that we talk about it as a team.

The amazing thing for me as a manager is I haven't had to really teach it as much as I thought I might have needed to, or wanted to, because a lot of the team that we have just does that. They understand their value in the marketplace and the value they're bringing to the table.

Do you have a piece of advice or a recommendation for your industry counterparts?

We're finding a lot of crossover. Companies that we're chasing for suites, are interested in private events also. Other venues could consider this because we found a lot of value in referrals between our team by combining those groups.