Meet Michele Kajiwara, SVP of Premium Seating Sales and Service at STAPLES Center, who shares her non-traditional story that spans working on small budget films to running premium at one of the industry’s most iconic buildings.
Interview by Jared Frank, ALSD 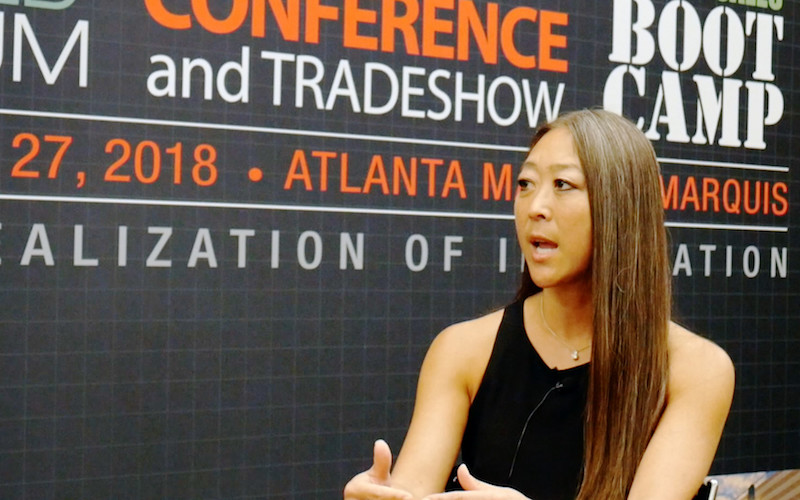 For those who don’t know you, which I’m not sure how that’s possible, can you give us a background of your work experience and how you got to this point today?

I have sort of a non-traditional path. I never thought, “Oh, I’ve got to work in sports.” I just knew I wanted to be in a dynamic work environment. I needed a lot of energy, and sports was a natural fit. Although, I don’t think I realized it when I was in school.

I graduated from the University of Southern California as a communications major. It served me very well because in so many ways, negotiating, communication, public speaking have all come to my rescue. In hindsight, that was a great major.

After graduating, the natural thing to do in Los Angeles was to start working in entertainment, and so I worked for a producer who was doing small budget films. I was working ridiculous hours. There was never overtime. I think I made $20,000 if that’s even believable.

In Southern California, can you even buy a camping tent on that?

You can’t do anything. I don’t even know what I did on that money. I was at work all the time though, so it didn’t let me spend any of the money I was actually making. I worked 15-hour days. I was on-call constantly. I don’t even remember having cell phones outside of these huge bricks that lived in cars.

Yeah, that was it!

I was at my boss’ house, always doing readings, screenings, whatever was needed. That job was the launching point into realizing that hard work, dedication, and a passion for what you’re doing is going to transcend most of the jobs that you’re going to do well at. It’s been a theme throughout everything else that I’ve done in my career. Now everything pales in comparison to that job, those hours. That was my foray into working in entertainment.

Then I moved to New York, convincing a girlfriend to move with me. No job, no apartment, and back in those days, there was really no Internet. We were looking for apartments in newspapers and magazines and through word on the street.

Newspapers? Were dinosaurs roaming the Earth?

Yeah, I’m dating myself now! We eventually found a place after a month of searching and sleeping at the YMCA, on park benches, and crashing at a waiter’s place. At one time, we were out of options. We gave ourselves a month, but finally found a place to live.

I got a job at Chelsea Piers working in PR and then transitioned into sales, which was the greatest step in my career to understanding what I’m truly good at. I started working in sales as a catering manager for two event properties on the piers. We booked weddings, bar mitzvahs, tradeshows, premieres, and launches.

At the time, there was a lot of money surging through the city. There was a dot-com boom, and Wall Street was doing really well. Lots of money, lots of great earnings and opportunity. I think that shifted my attention to, “Well, I have something that I can control with this sales gig.”

The opportunity to be an integral part of a business in sales was something that attracted me to furthering my career in the discipline. After four years in NYC, working, experiencing 9/11, I was ready to come back to LA and double down on California. Eventually, I started working at STAPLES Center, an opportunity in a great facility with great energy. The company itself was dynamic and progressive enough to be something that was really attractive. I took a pay cut, I took a title cut, and I just got in.

“I moved to New York, convincing a girlfriend to move with me. No job, no apartment, and back in those days, there was really no Internet… We eventually found a place after a month of searching and sleeping at the YMCA, on park benches, and crashing at a waiter’s place.” – Michele Kajiwara, STAPLES Center

It was more than $20K, so I guess I was kind of moving up little! I started as a service account manager. I got to know all of our clients in the building, which I still work with now, and they still call me. We really established a rapport, so I’m always an open door there.

While I started as an account manager, I moved into sales as soon as there was an opportunity. If you can recognize that a company or an industry is really dynamic, just get in. You can navigate so much better once you’re inside.

That one sales position opened up, and then the rest is history. I accelerated in my sales, then got into management. I moved to the Home Depot Center for one year and took over the premium there, which included all of the premium assets, sales, service, and ticketing. They were really nimble. They even got David Beckham. But just when I started, David Beckham decided to go play for his club team. That was rough, but we learned great lessons there. I came back to STAPLES Center, and it has been no looking back ever since.

It’s been a fun ride. So much of the company and the landscape physically has changed. I've been able to stay in a market that’s home yet is very fluid and has a lot of opportunity for growth. I’m in a really good spot.

I have to circle back on these small budget films you say you worked on. Are you able to expand upon that? Anything we may have seen?

By small budget, it ended up being a $30 million picture. That’s by no means a small budget. She was the daughter of the owner of the company, and so her budget wasn’t traditionally what anybody else would consider small.

We just did everything that she needed in her personal and professional life. I’m young too at the time, right out of college, helping her buy a car and a house. I’m staying with her on the weekends if she needed help. We were going to Bed Bath & Beyond and putting bed sheets on, organizing her house, cleaning cabinets, walking her dog and taking him to the vet, throwing birthday parties for her stepdaughter-to-be. We were doing everything.

She needed her taxes done, and she’s a gazillionaire. I didn’t know what I was doing, so I sent her to H&R Block. We were just laughing because it’s like they’ve never seen anybody walk in with a portfolio that this person had. It was really whatever it took, never knowing what the day was going to produce.

Again, I go back to every step that I took in my career at the time felt right. So much of what you do when you’re young is just operating on instincts. You don’t know what you’re doing. You’re just going with your gut and hoping that it lends itself to a good career decision. These great experiences taught me about how deep I could dig. When you think about finding another gear, it’s jobs like that that help set you up with the I-can-really-do-anything attitude and the ability to find resources.

“These great experiences taught me about how deep I could dig.” – Michele Kajiwara, STAPLES Center

Working through confidence issues, feeling your oats, finding your place in the world. It sounds like you did it.

Absolutely. Just putting your hand up and asking for other opportunities once you’re in a company is a safe environment to explore your reach. I learned that sales was something I would forever be passionate about. Once I started doing it, I knew that was going to be something that will follow me throughout my entire career. That was a really important lesson that I learned in New York.

In each period of my career and certainly in my job now, I make sure that I take time off for travel. Between New York and coming to LA, there was a year where I just dropped a backpack on and went by myself to Southeast Asia for one circuit. Then I went to South America on another circuit. There was never one moment when I thought that taking time off would cause me to lose momentum professionally or hurt me. Of course, my parents were a little bit concerned about the what and why.

“Just putting your hand up and asking for other opportunities once you’re in a company is a safe environment to explore your reach.” – Michele Kajiwara, STAPLES Center

It felt right at the time, and those lessons have given me exponential resources. I learned to figure things out not only domestically but internationally, and because of AEG’s international footprint, it’s a great skillset to recognize that you can be dropped off anywhere in the world and figure out how to survive, thrive, and get the best out of whatever that culture is. Even dealing with different cultures in Los Angeles, the appreciation, respect, and I've-been-to-your-country-I-understand empathy gives you a little bit of a better seat at the table.

Read Part Two of our exclusive interview with Michele Kajiwara.