In this premium seat beginner’s guide, learn the fundamentals of suites, loge boxes, and club seats. This data compilation introduces industry basics, but veteran ALSD members can also benefit from this informative overview of benchmarks.
By Daniel Frame 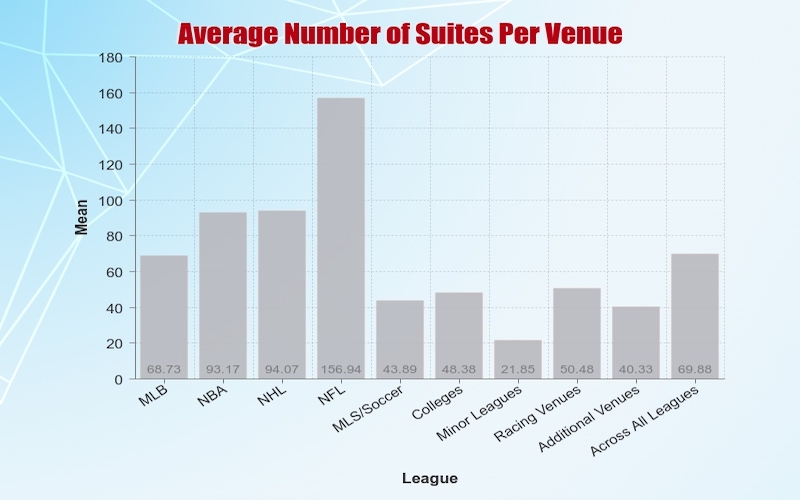 There are many components to seating at a stadium, arena, ballpark, performing arts center, or any public assembly building that hosts sports and entertainment events. Each seating option can provide fans with exceptional experiences, leaving them with lasting memories for years to come. In addition to general reserved seating in the lower and upper levels of facilities, premium seating options include luxury suites, loge boxes, and club seats.

While luxury suites have been prevalent in most venues around the country for almost three decades, even more seating options have been added in that time, such as party suites, loge boxes, viewing decks, and other social gatherings spaces. Party suites typically offer a larger event space for entertaining more people in a suite setting. Loge boxes, which are typically designed for four to six people, allow corporate buyers to experience the game in a semi-private, suite-like setting. Club seats are often located in the mid-levels of a venue and feature exclusive club access and other premium amenities.

Each premium option is unique, from capacities to food and beverage offerings. The quantity and pricing of these seating options can also vary widely across sports venues. Due to these marked differences between seating categories, let’s take a closer look at each premium seat type.

Luxury suites are an essential revenue stream for teams and venues. They provide all the traditional experiences of a game, while adding an extra sense of comfort and exclusivity for guests. In order to maximize the experience and return on investment for guests, suites provide upscale food and beverage menus, as well as exclusive technology touches to follow the game or conduct business meetings.

Although the main objectives of a luxury suite are similar for all sports, each sport/league offers different quantities of luxury suites that vary in price, lease terms, occupancy rates, and whether the lease includes playoff tickets. For example, basketball, baseball, and football venues tend to build more suites, but in areas such as racing and minor leagues, there tends to be fewer suites.

The average occupancy rate for suites is 86.47% across the industry, including 77 venues that are 100% sold-through. The lease terms for most suites are determined on a team-by-team basis. There are several consistencies in lease terms across leagues. Most lease terms are one, three, five, seven, or ten years. In some rare cases, leases may go as far out as 20 or 25 years.

Only 35.15% of suites have leases that include playoff tickets. However, many teams have lease terms that include all events, such as concerts. An exception to this rule would be venues hosting major events like the NCAA Final Four or the Super Bowl, which are generally excluded from all events, but often attainable to suite holders through first rights of refusal. Additional costs beyond the lease are typically for food and beverage, security, cleaning, and AV needs. 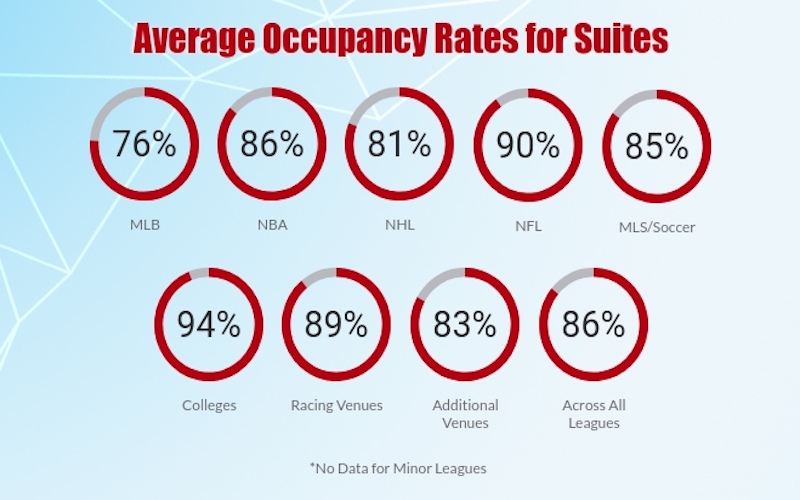 Split-leasing is commonly permitted. Across the nine league categories tracked by the ALSD, eight of them allow split-leasing in 75% or more of their venues. Sub-leasing, or suite reselling, is permitted in 50% or more of the venues in six out of the nine industry categories, and 42.68% of all teams across all leagues allow suite reselling. Common language in suite contracts for these practices includes “with team approval,” “with our consent,” or “with our permission.”

Additionally, some traditional suites in venues are listed on a per-event basis. Buyers who do not need a suite for the whole season may purchase per-event suites in some cases, giving them the flexibility to strategically entertain customers in a suite for just one event. Suites are listed on a per-event basis in 84.02% of all venues. For these event suites, some teams choose to include food and beverage in the cost. However, only 41.40% of all teams include F&B in the cost of the per-event suite.

Suite reselling is permitted in over 50% of venues in six out of the nine industry categories, and 42.68% of all teams allow suites to be resold.

Additionally, suites are implementing more and more technology to suit users’ needs. Many suites include television displays, as well as the use of iPads and tablets, for multiple functions, from business presentations to food and beverage orders. Some teams even offer mobile apps, specifically for their suite levels.

Across all categories, a few foodservice providers lead the way in catering. Of those venues surveyed by the ALSD, 28 of them partner with Delaware North, an additional 28 with Aramark, and 63 with Levy Restaurants. In addition, 21 venues use in-house catering.

In seven out of nine league segments, 75% or more of venues allow suite holders to brand their suites. Most of these teams allow modifications with prior approval. Some suites also may provide restrooms. Across all leagues, 32.35% of venues have restrooms in their suites, while in 41.67% of venues, they are in the common areas. And among 25.98% of venues, restrooms are located in a combination of the suites and common areas.

An additional way to experience the game in a premium seat is in a loge box. These four- or six-person boxes are similar to luxury suites, only with fewer people in semi-private environments. Loge boxes are a relatively new concept, and not all teams have incorporated them into their venues yet. At present, loge seating is most common in NBA and NHL arenas, with 53.33% and 50% of teams in these leagues, respectively, offering loge options. By comparison, only 6.67% of MLS venues have loge boxes. 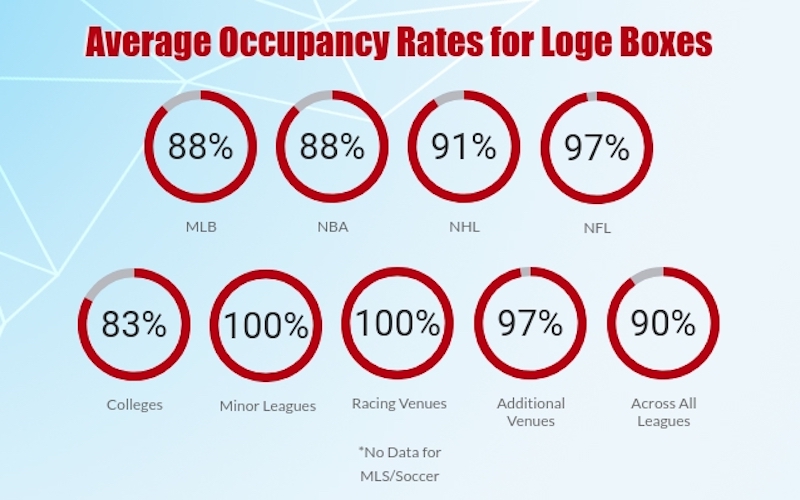 The final type of premium seat examined here is a club seat, which is typically tied to one or several club areas throughout a venue. Club areas in a sports and entertainment facility are typically special sections located in mid-levels, but a growing number of ultra-exclusive clubs are being built on event levels. There can be between one and ten club areas in a venue. 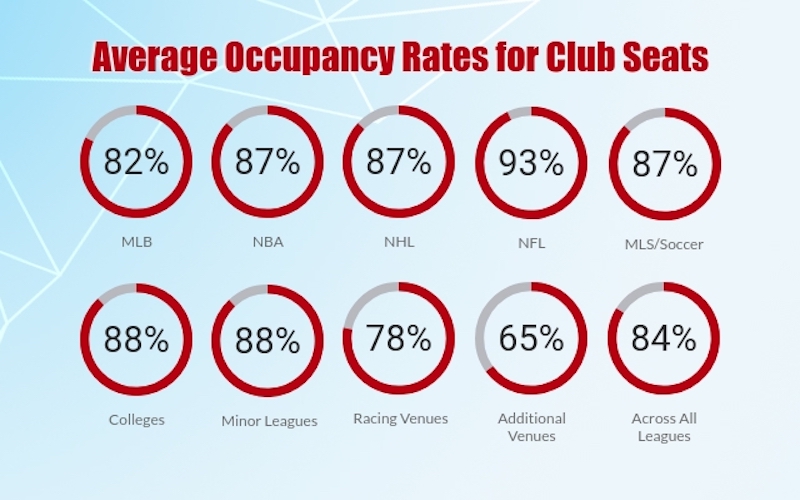 Different, But the Same

Across all leagues, there are many similarities and differences in their premium seat offerings – luxury suites, loge boxes, and club seats. Many venues will have some combination of these three seating options, but to varying degrees.

The number of suites, loge boxes, and club seats are different for each venue, but typically are similar within a particular league.  Some leagues have more suites than others, depending on the size of the venue. Typically, MLB, NBA, NHL, and NFL teams all have larger quantities of suites, loge boxes, and club seats, due to the size of their venues and popularity of their sports. Despite the many differences between venues and leagues, the purpose of premium seats is similar across all industry facilities – to provide fans and corporate buyers with exceptional experiences and returns on their investments.