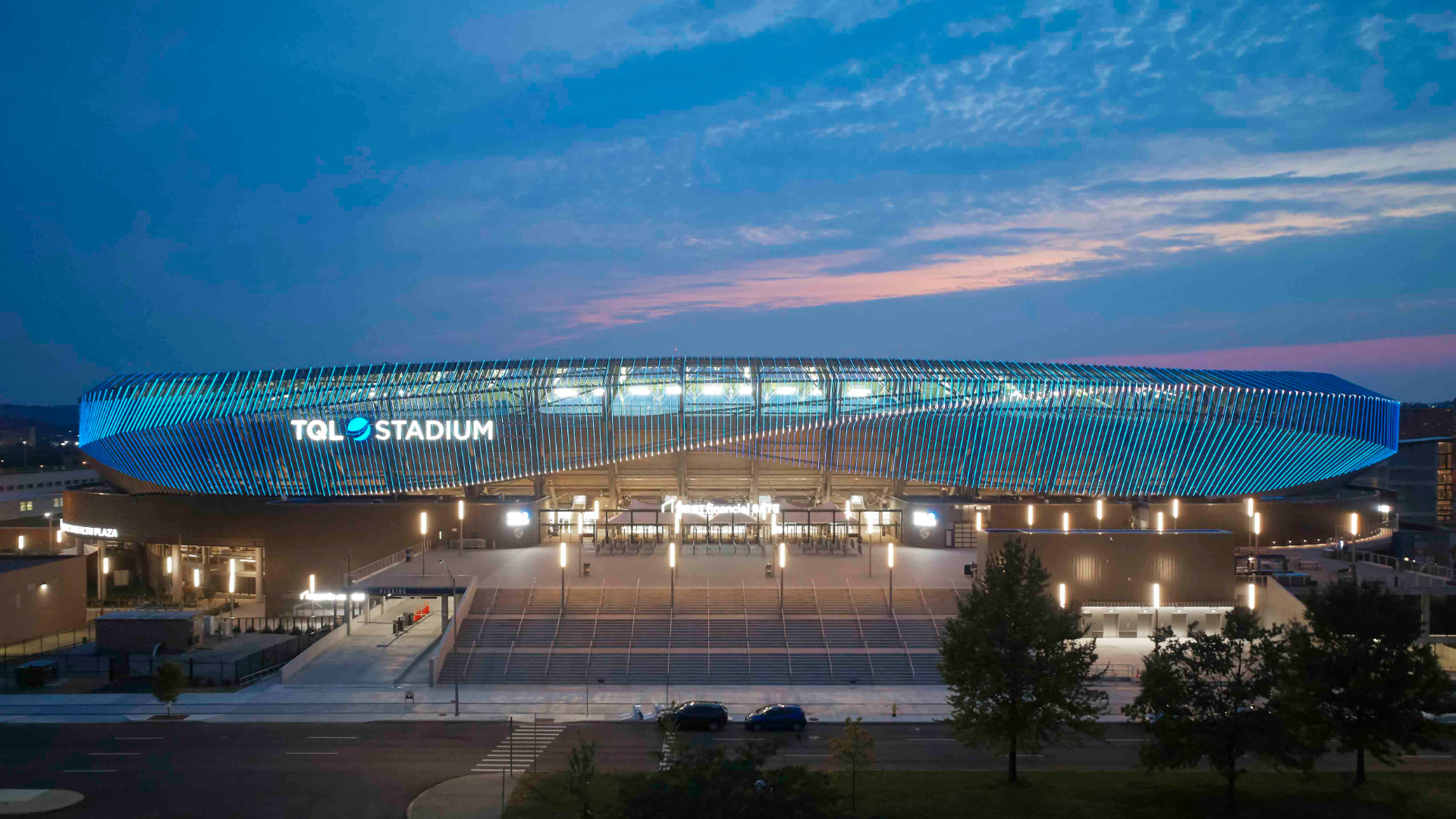 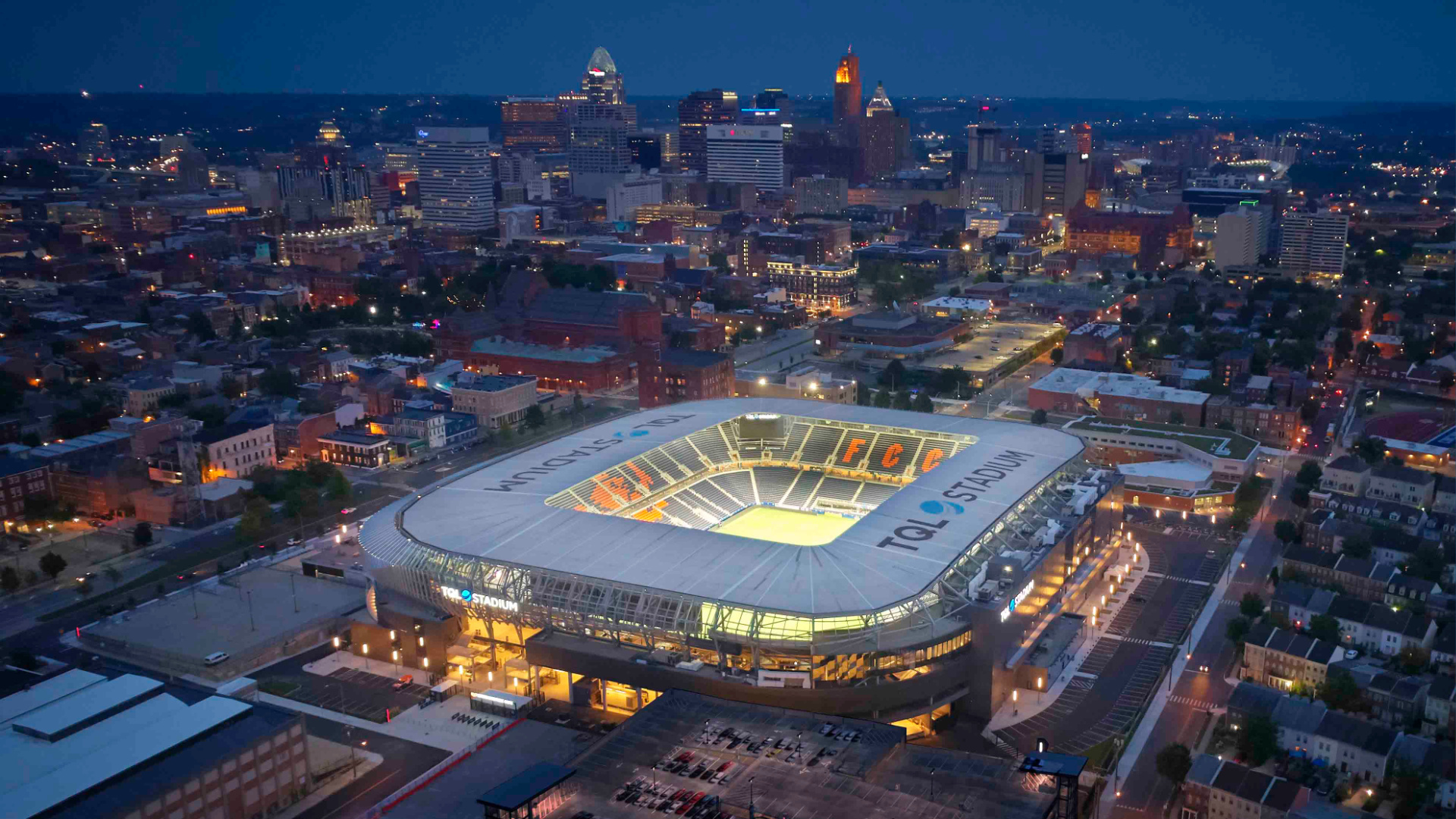 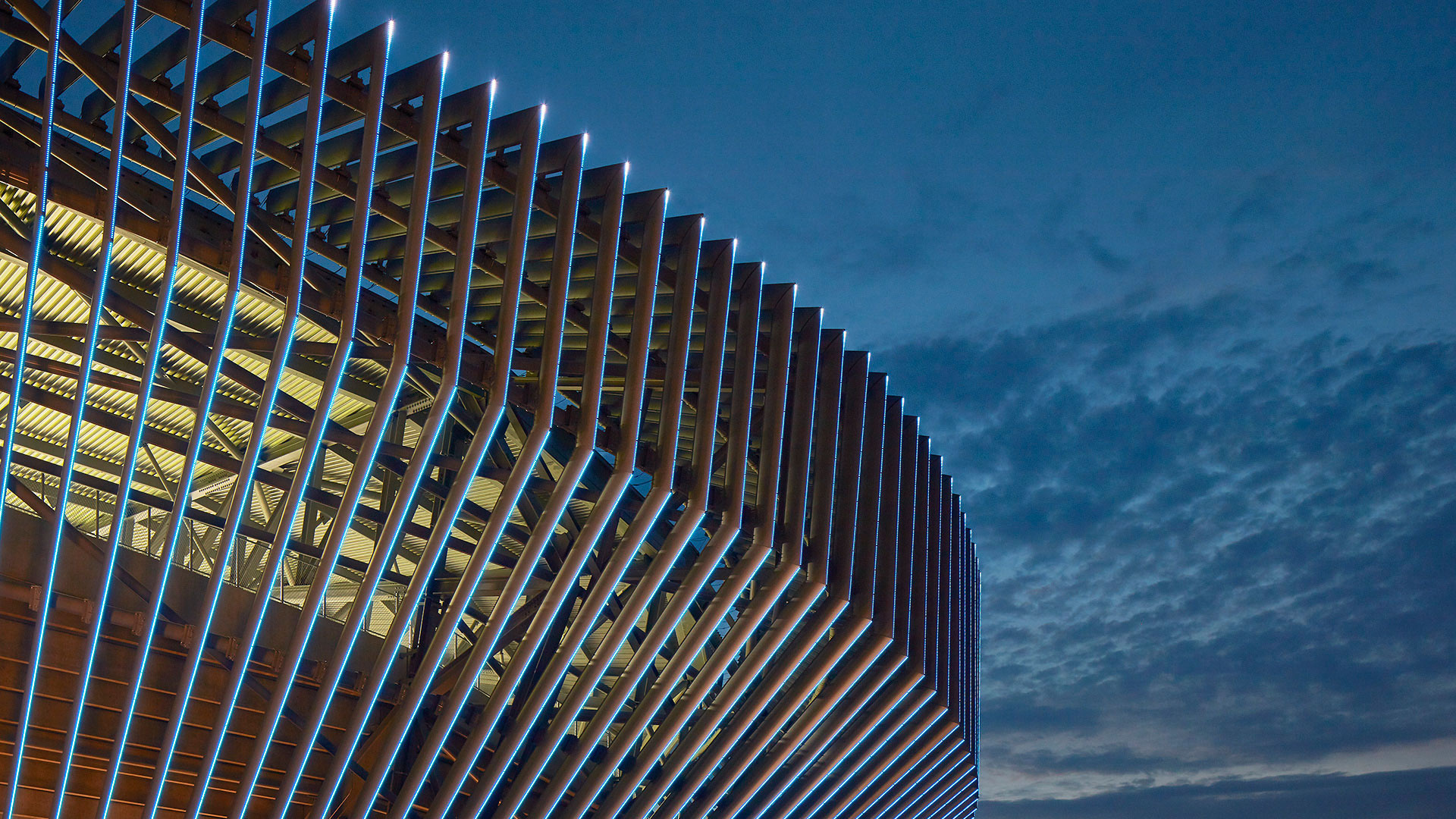 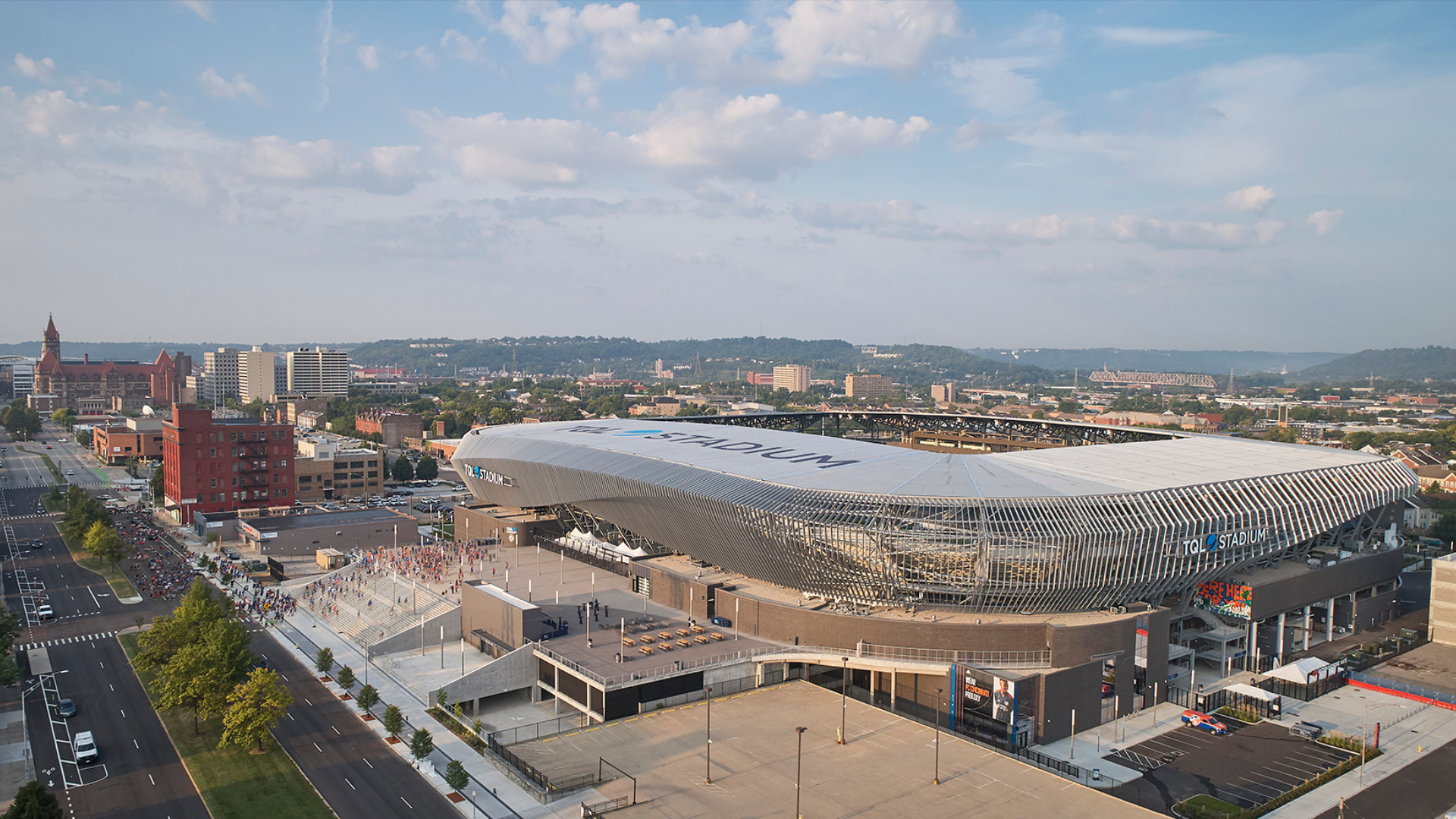 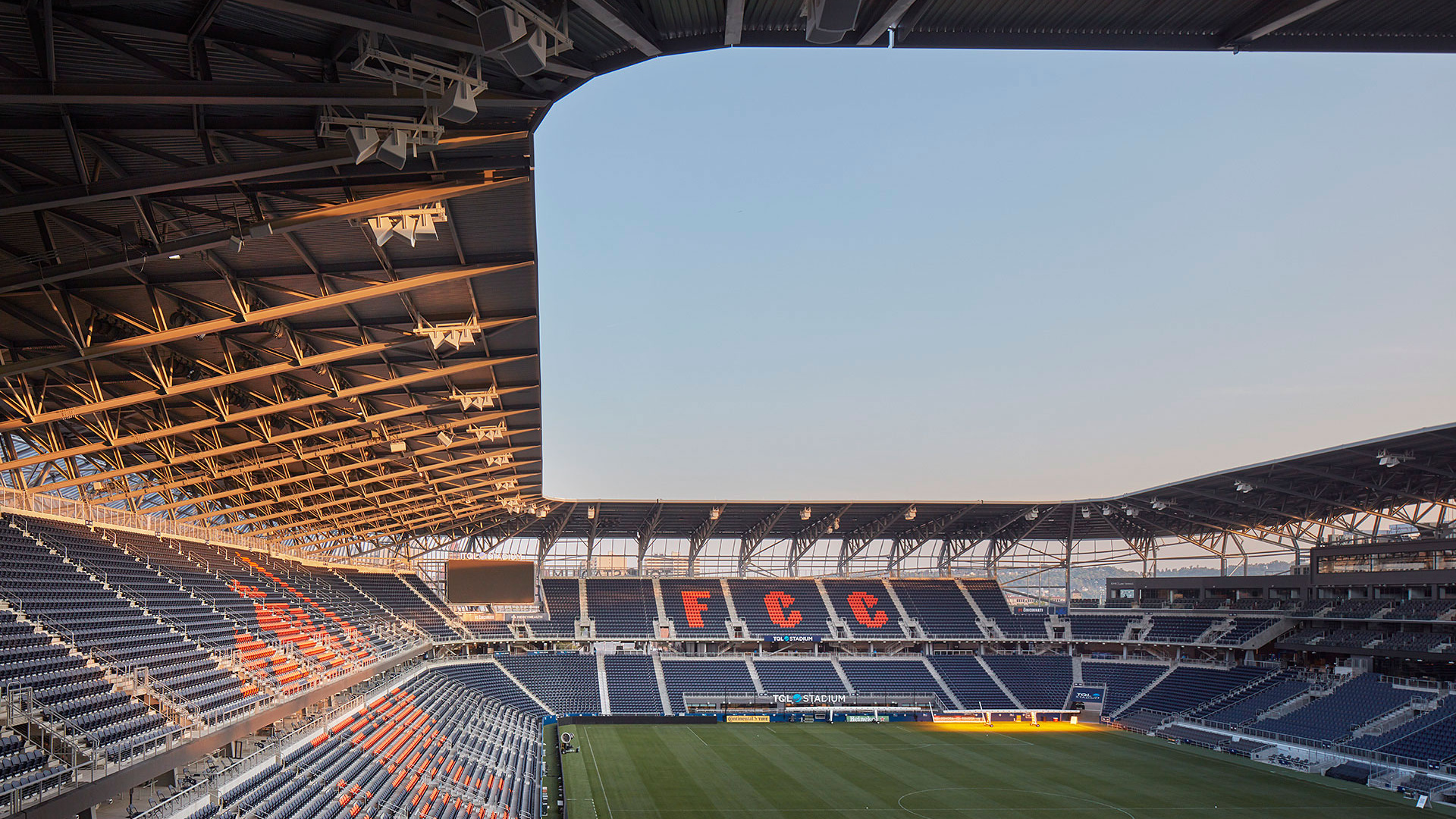 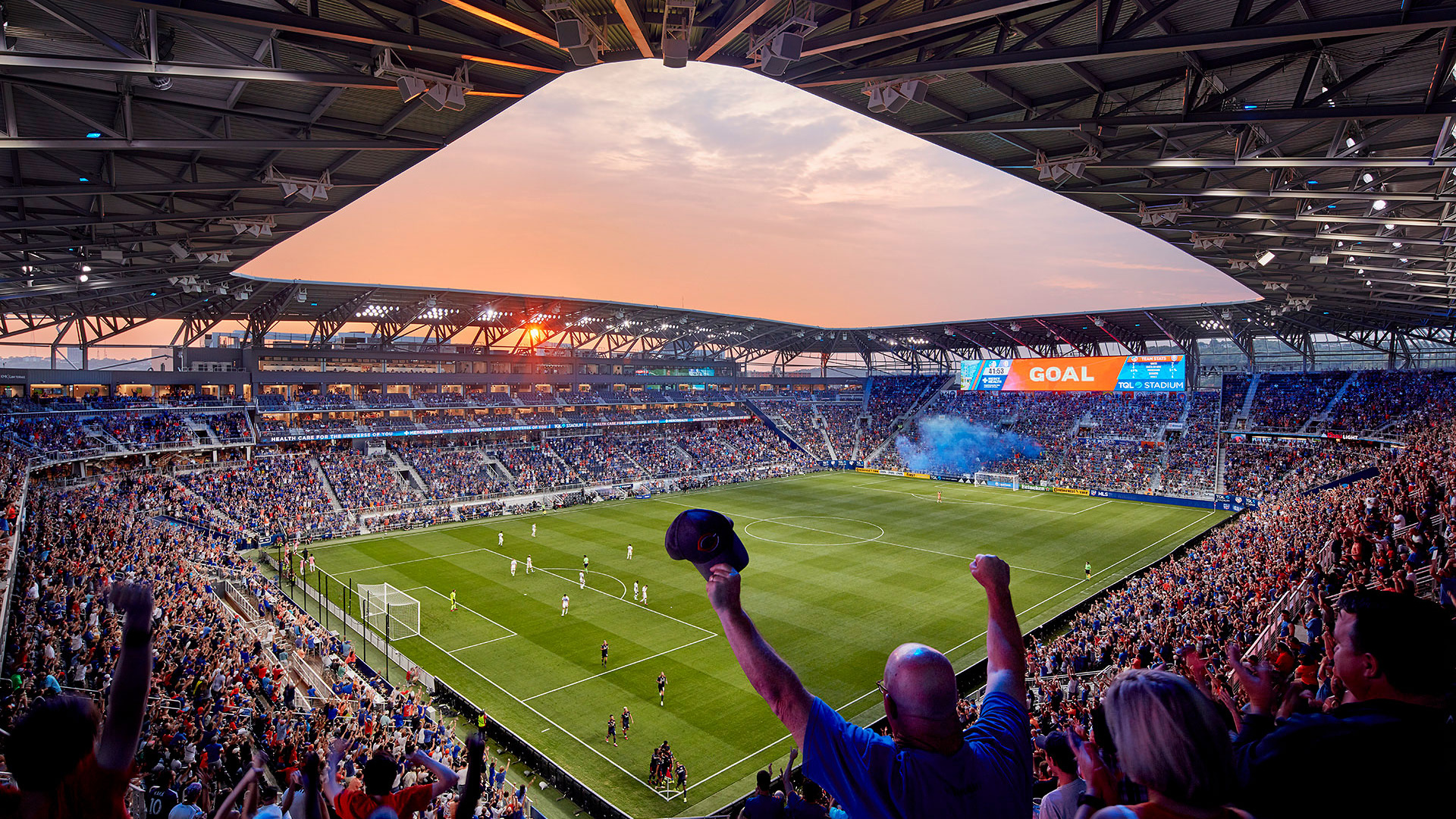 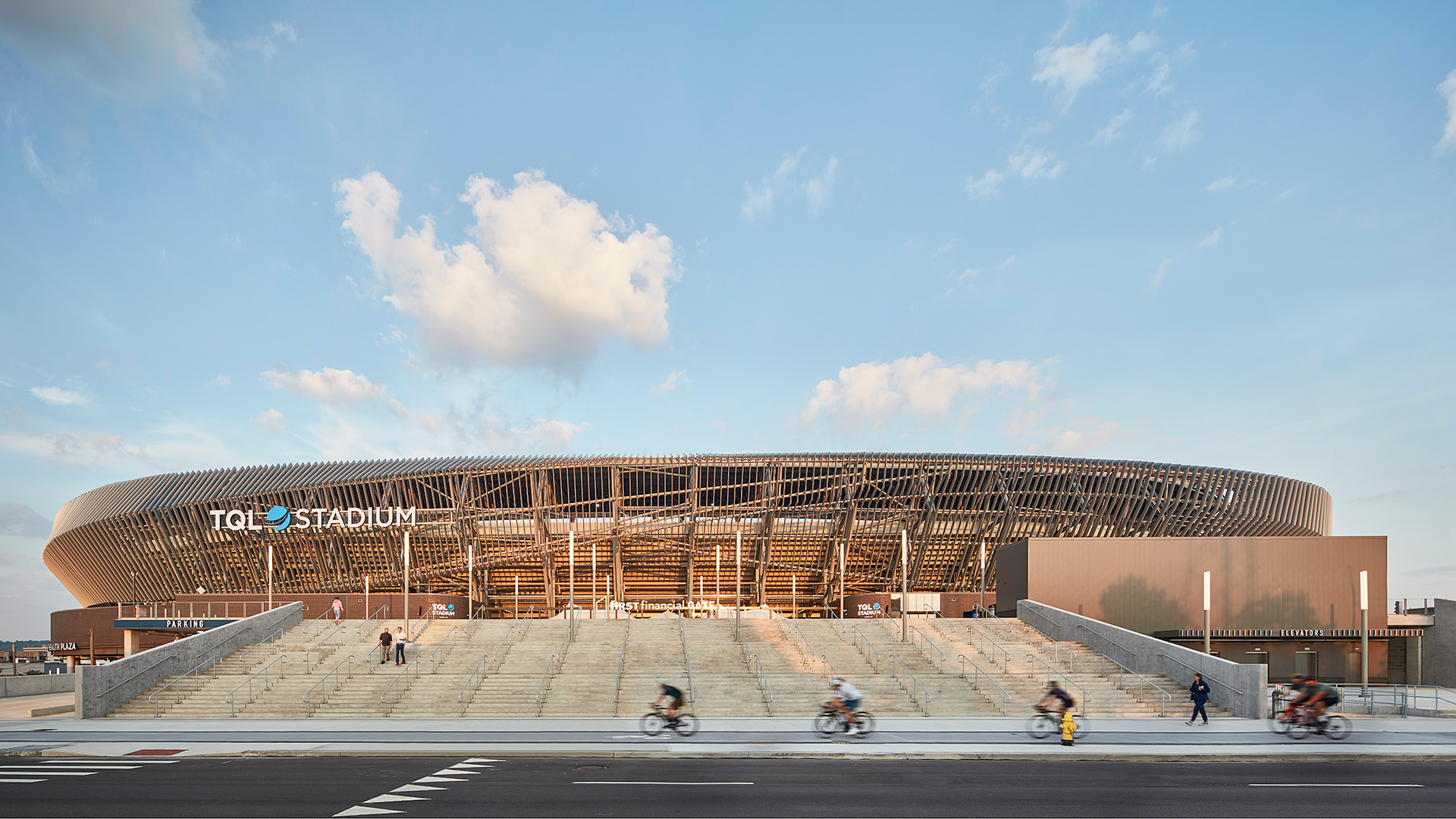 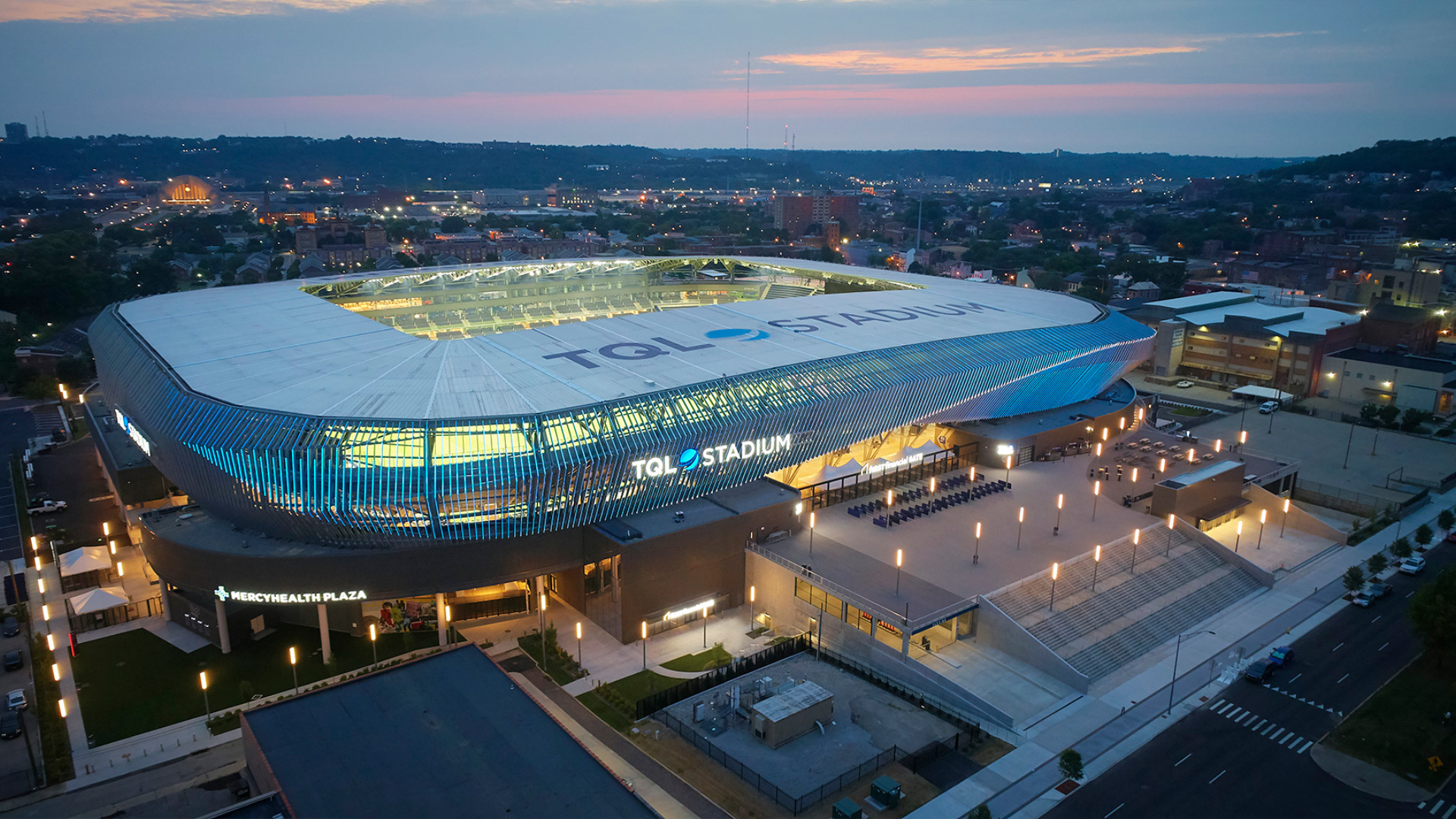 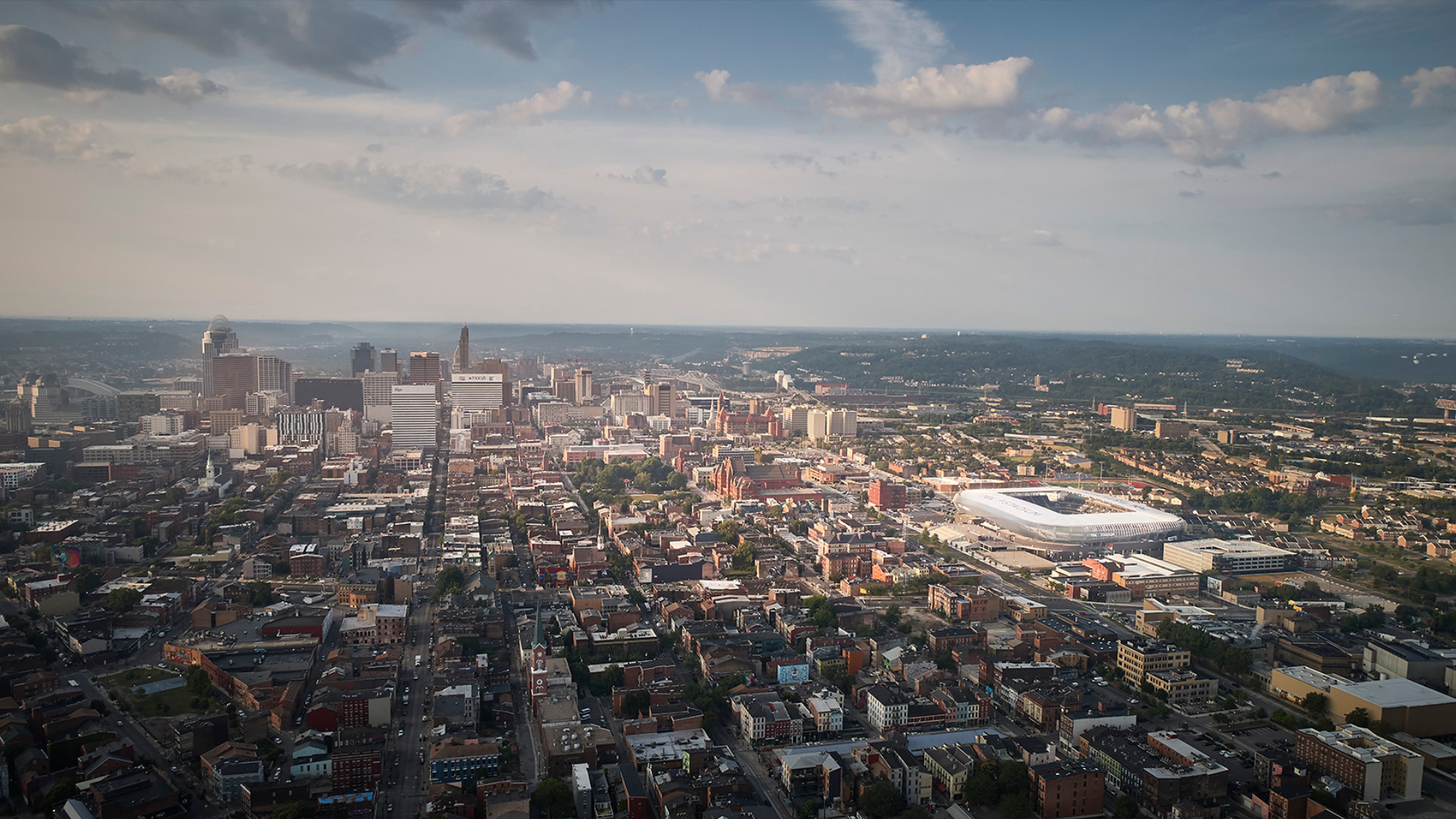 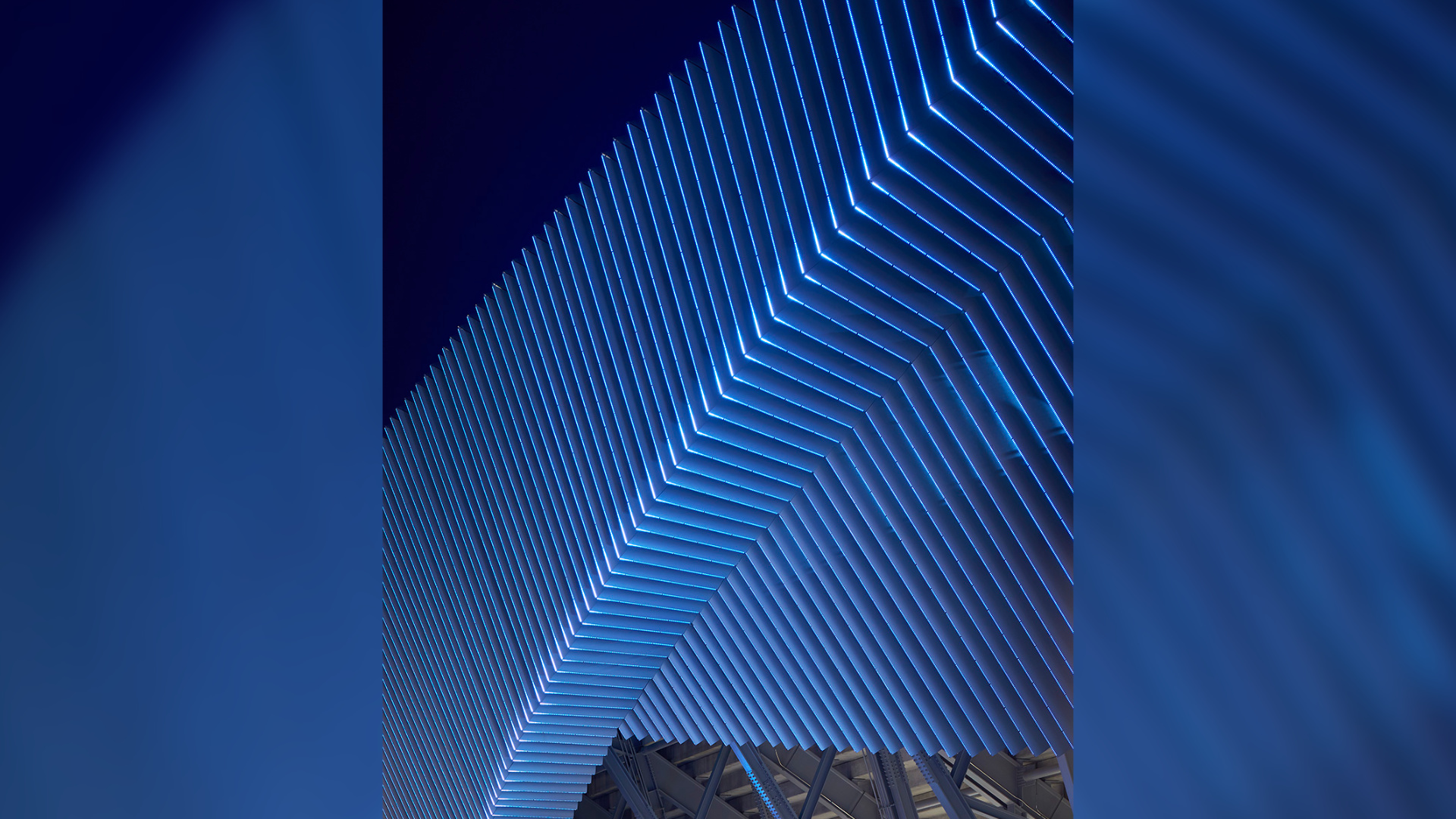 The stadium is mindful of both everyday activity and match day pageantry that take place outside its gates. Among the many considerations informing its orientation has been the club’s passionate base of supporters. Their traditional march-to-the-match attracts thousands and arrives from the east.

The dedication and authenticity to soccer in Cincinnati rivals any city in the United States. Our design for FCC harnesses this energy to create a world-class soccer atmosphere. TQL Stadium defies stasis by wrapping itself in over 500 mass-customized aluminum fins.

When viewed from down Central Parkway, these articulated aluminum façade elements create the stadium’s signature form: a singular twisting motion that signifies the tension between two teams about to take the pitch. When viewed straight on, they provide a glimpse into the stadium, fostering a heightened sense of anticipation for the match within.

Inside, a 360-degree continuous seating bowl puts all the focus on the pitch, similar to the sport’s most iconic European venues. More than a thousand orange seats in the East stands form the imposing lion from the club’s crest.

Up above, 300,000-square-feet of canopy shields every seat from the elements. Combined with the continuous seating bowl, the sound and visual atmosphere is captured and maintained within the stadium – thus elevating the match day experience.

The new incarnation of The Bailey, the club’s legendary supporters’ section, resides in the North stands. More than 3,000 supporters – standing on the steepest permissible slope – create an imposing wave of sound that crashes over the pitch below.

We offset The Bailey downward, closer to the pitch, to accomplish three goals:
• Increase intimacy of supporters’ section
• Preserve sightlines over supporters, even with scarves held high
• Create space above for North America’s widest video board in a soccer-specific stadium

The stadium’s premium spaces reflect the city’s rich architectural heritage, each in their own unique way. The Tunnel Club, for example, uses rich materials such as Teak wood and warm tones reminiscent of institutions like Cincinnati Music Hall.

The bespoke back shelving of the club’s bar was inspired by the five-story stacks of the Old Cincinnati Library.

Over-The-Rhine and the city’s brewing traditions inspired the feel of the First Financial Club, a fresh take on a beer hall. A massive two-story, 1,000-square-foot brick feature wall anchors the space, inspired by the labyrinth of 19th-century beer vaults that lies beneath the city.