The 26-year veteran of the sports and entertainment business will be celebrated at the 31st Annual ALSD Conference and Tradeshow, August 15-17 at the ARIA Resort & Casino in Las Vegas.
By Jared Frank, ALSD 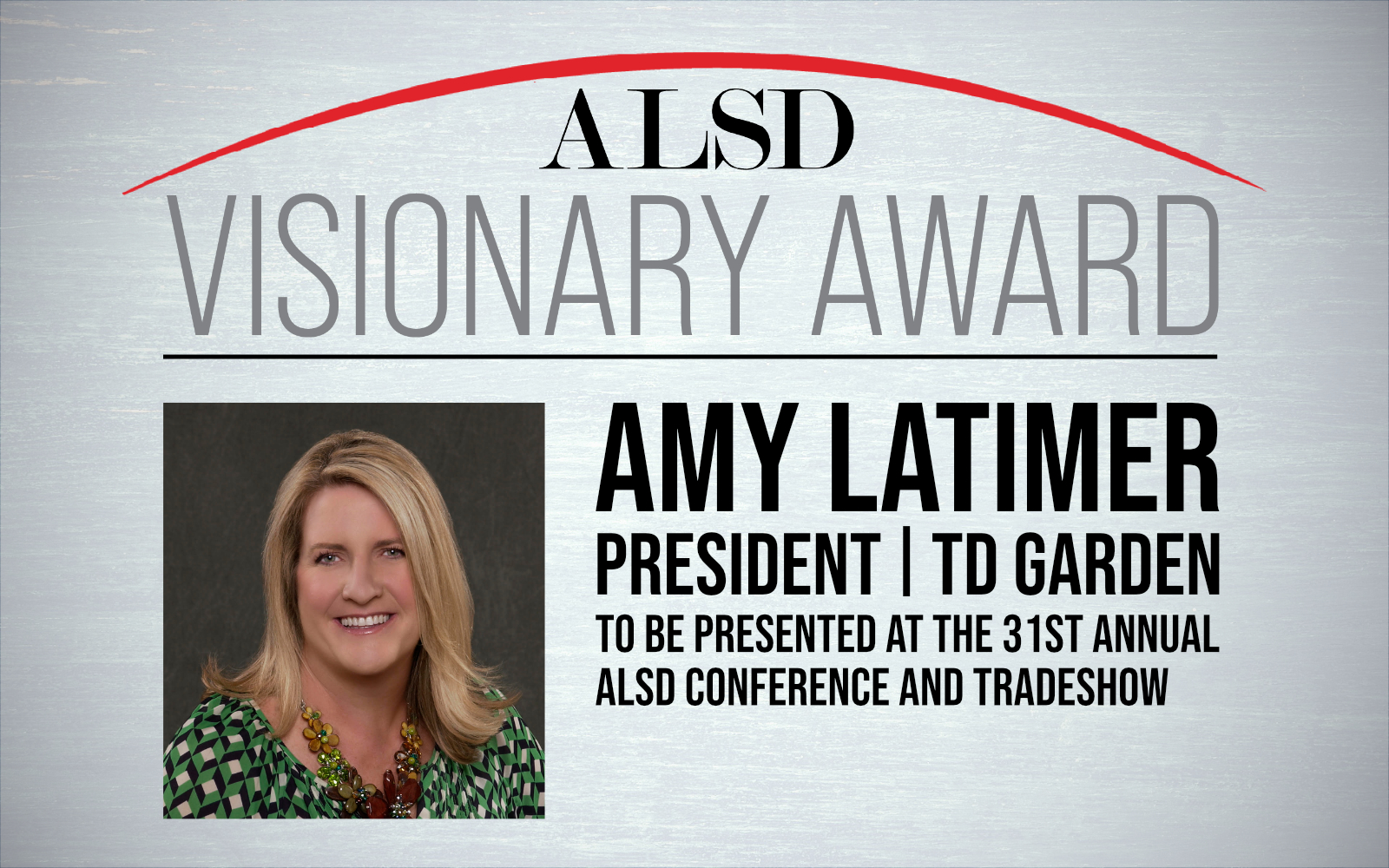 The ALSD focuses its awards programming every year on an elite few. In addition to our Spotlight awards, we recognize only one individual annually with the ALSD’s Bill Dorsey Visionary Award, which places high emphasis on character as well as results from a universally appreciated leader in the sports and entertainment industry.

This year’s recipient is Amy Latimer, President of TD Garden since 2012, who will be recognized at the upcoming 31st Annual ALSD Conference and Tradeshow. We challenge anyone to find even one person in this industry who does not respect her game. She has helped build and reimagine TD Garden, positioning it as one of the highest performing arenas on the continent. She has helped lead the transformation of the entire urban neighborhood around TD Garden, inspiring loyalty from her colleagues, partners, and team members at every turn.

“The Visionary Award is very much about character, reflected in the fact that our visionaries inspire loyalty,” says Bill Dorsey, Founder and Chairman of the ALSD, for whom the award is named. “It is amazing how few people leave the visionaries for which they work. They inspire love and loyalty, and yet can still be tough when it matters.”

“I’m a very simple person,” Amy Latimer says. “I just try to do the right thing, and sometimes doing the right thing is really hard. I’ve made a gazillion mistakes, but the true sign of good character, I believe, is how you handle the mistake, how you deal with it and how you deal with your team. I hope that my team feels I have always tried to put their best interest ahead of my own.”

Character-guided leadership has never been more valuable than during the past 12 months that brought all manner of adversities. Amy Latimer has led her team out of a pandemic bottom, now charging towards the light at the end of the tunnel that gets larger every day. Starting the week of March 22, through cooperation with state and local governments as well as public health officials, TD Garden is eligible to welcome back just over 2,000 fans (12% capacity) for in-person events through new “Play It Safe” guidelines and protocols.

“We’ve been working for this date for a year,” Latimer says. “Like so many people in our industry, things kept changing with new disinfectants, masks, cleaning protocols. And finally, we got to a really good place by November/December to reopen for games without fans. And now, we’re really happy to layer on fans.”

Delaware North, the parent company of TD Garden, has been instrumental in the effort to return fans to venues, not only in Boston, but throughout the venue marketplace. Through its “Safer Stadia” initiative, Delaware North turned to experts in a variety of scientific fields to research and analyze its sports venues to determine best practices for reopening these buildings, assess the risk factors, and compare those risks to other everyday activities. In many cases, the research shows attending a sporting event, when complying with the proper protocols, carries no greater risk than most other everyday activities.

“It was a good guide for us,” says Latimer. “And it also helped with the state and the city. We walked both of them through our Safer Stadia presentation, and it gave them a comfort level.”

Always a thought leader and champion for this industry, Delaware North openly shared its findings with any sports venue, whether it was a Delaware North partner or not, to help everyone create a plan and understand where to allocate resources.

“Our industry came together in such an amazing way in such a time of stress to work together,” says Latimer. 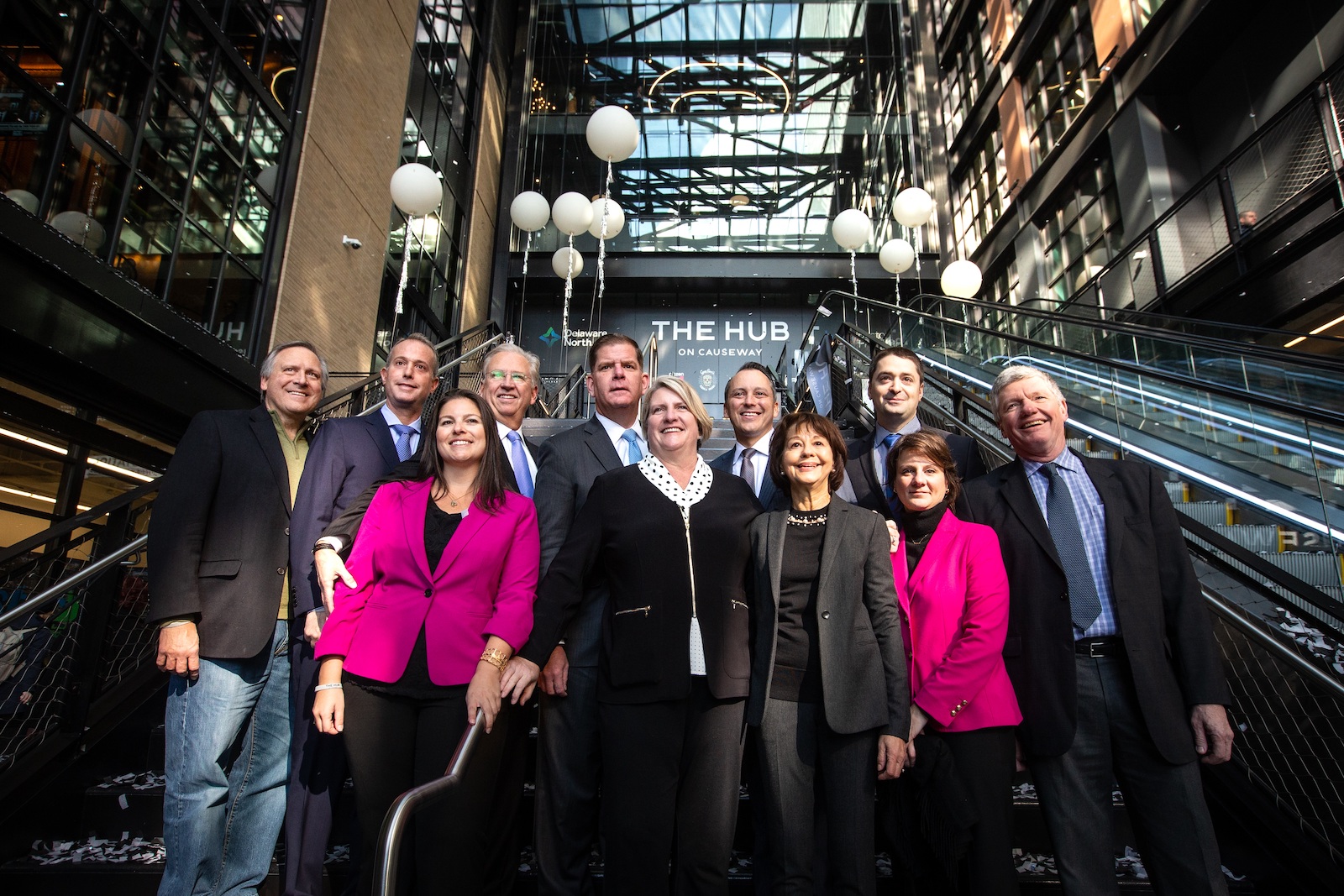 Constant Reinvention of Self

Latimer, a former college basketball player at the University of Rhode Island, always considered sports her hobby. It wasn’t until she moved to Boston to work as a consultant on the opening of TD Garden (known then as the FleetCenter) that she believed sports could be her career.

“I thought I was going to be a lawyer,” Latimer says. “I worked in a law firm (when I moved to Boston). But I fell in love with the energy and the fans. It was such a great experience. I was so thrilled when they offered me a full-time position at the FleetCenter.”

That first sports business position in 1995 was Director of Marketing, which is interesting after Amy reveals that she did not study marketing and had never worked in marketing up until that point.

“I find that people sometimes overanalyze if they’re the right candidate for a position and want to make sure they have 100% of the qualifications,” says Latimer. “I believe if you have 75% of them, raise your hand, make a case, and you’ll learn the rest of it. That’s what my career has been based on.”

Under Latimer’s leadership, TD Garden has transformed multiple times. In 2015, she led a $70 million, floor-to-ceiling renovation of the arena. And in 2019, a $100+ million, 50,000-square-foot expansion of the arena opened to the public.

Several promotions, challenges, and years later, Latimer remains exactly where she wants to be – in a job with opportunity to try and learn new things.

“The Jacobs family has been so wonderful to me,” she says. “They have stretched me every time they’ve given me the opportunity to do something new. They’ve given me new challenges like renovating the building and doing The Hub on Causeway development. At one point, I oversaw our UK business for two years. Now I’m overseeing the Garden but also overseeing business development for all of Delaware North. I love my job. Because it’s changed so much, it’s been an awesome journey.” 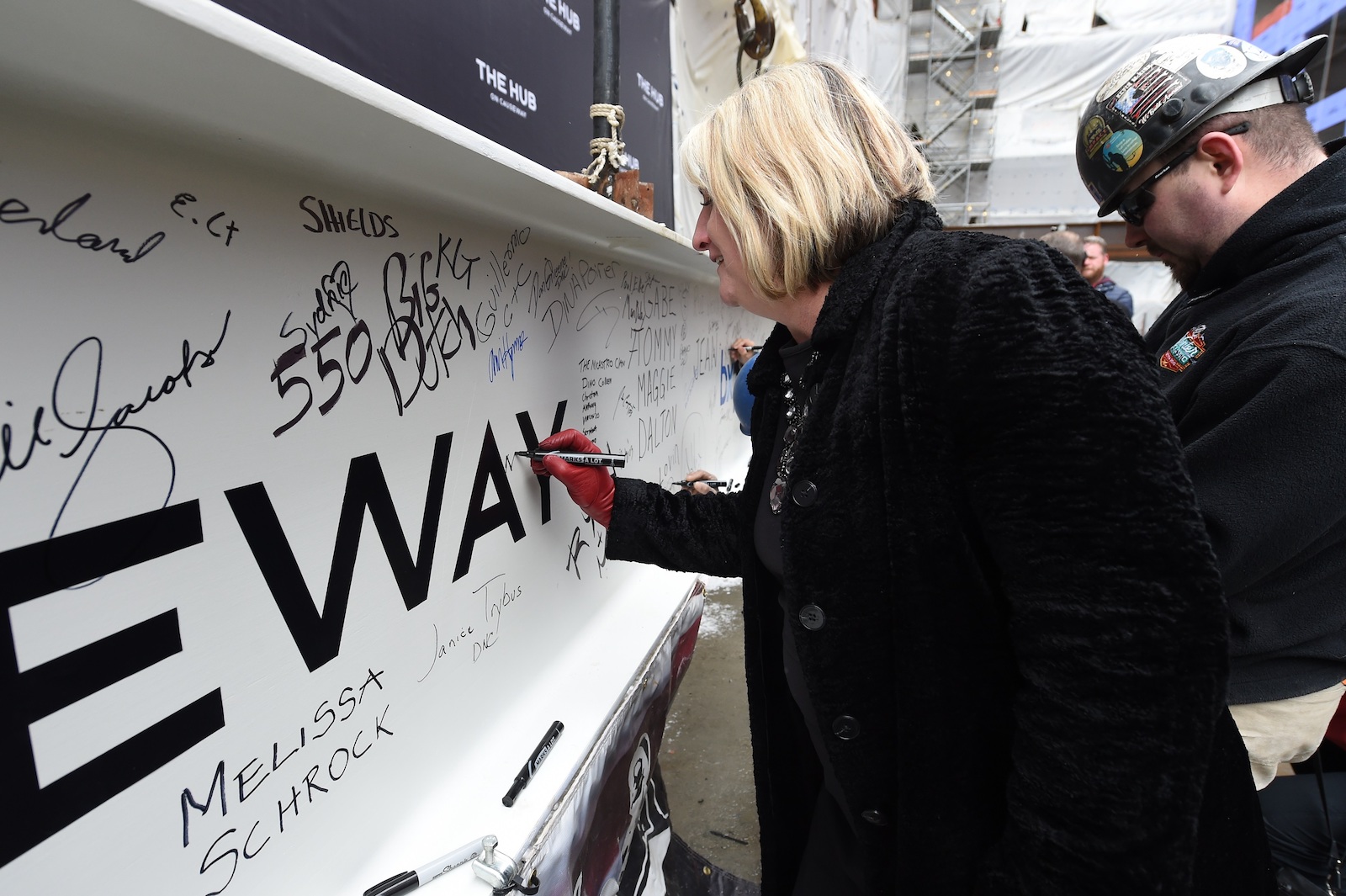 Amy Latimer makes her mark on the final steel beam as part of the topping out ceremony for The Hub on Causeway development surrounding TD Garden.

Amy Latimer is the first female recipient of the ALSD Visionary Award, further illustrating sports as a platform for progress, but one with work still to be done.

“We do a lot with women talking to other women about hiring,” Latimer says. “But I’m not sure we do as great of a job at exposing some of the male leaders to this next generation of women.”

For the best visionaries in any industry, there is no finish line. And aside from continued improvements to the fan experiences at TD Garden, Latimer aims to continue providing leadership for this industry to make sure it has an inclusive workforce.

“We all know diversified teams bring different perspectives and different solutions,” she says. “People have heard that, understand that, and try to live to it, but there is still a lot of opportunity to improve. We need to keep shining a light on that next generation, for women to hire them, for men to hire them. They’re there. I see them. They’re coming for it.”