On a concurrent timeline with SunTrust Park, the Atlanta Braves are also developing another 1.2 million square feet of mixed-use development meant to serve as a lifestyle destination and revenue generator 365 days a year.
By Jared Frank, ALSD 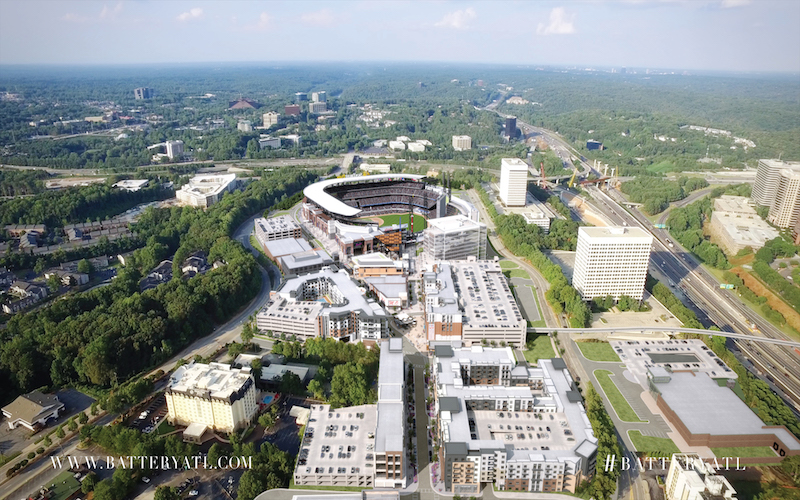 As impressive as SunTrust Park is, it’s what lies at the ballpark’s front doorstep that fuels the overall project. A 260-room Omni hotel, 550 apartments, over 300,000 square feet of office space – including the new nine-story headquarters for Comcast’s Southeast region, a rejuvenation of Atlanta’s iconic Roxy Theatre, and 350,000 square feet of retail and restaurants make up The Battery Atlanta.

Located in Atlanta’s Cumberland sub-market in Cobb County, 12 miles from downtown, the piece of real estate purchased by the Braves is 90 acres in totality. Phase one of the entire project is about 60 acres. Of that, 15 acres is the new home of the Braves, SunTrust Park, and the remaining 45 acres is 1.2 million square feet of mixed-use development.

Master-planned together, SunTrust Park and The Battery Atlanta will play off one another, tossing fan experiences back and forth like a pitcher and catcher, those batterymates being the inspiration for the development’s name.

“[The Battery Atlanta] is very much part of our pitch when we are talking about what the fan experience is for Braves fans coming to SunTrust Park,” Schiller says.

“What we’re selling here at SunTrust Park is more than just SunTrust Park,” adds Paul Adams, Vice President of Ticket Sales and Service for the Braves. “It’s a community that we’ve built.”

Most mixed-use developments tout a thriving community for people to live, work, and play that generates revenue 365 days a year, and not just on gameday. What separates The Battery Atlanta from other projects anchored by sports and entertainment venues is the Braves’ controlling interest and the compressed timeframe in which both the park and district have been constructed.

“[The Battery Atlanta] is very much part of our pitch when we are talking about what the fan experience is for Braves fans coming to SunTrust Park.” – Derek Schiller, Atlanta Braves

The Braves, majority owners of the entire parcel of land, have developed all 60 acres using concurrent construction timelines of approximately three years. Not every storefront will be open or apartment occupied on Opening Day, but many will be with many more coming online throughout 2017.

Atlanta is a notorious car culture with gridlock often the case during rush hour. Cognizant of this fact, the Braves have bumped back the start time for all weekday home games to 7:30pm.

One of the driving factors for the Braves choosing the Cobb County site to build on is the more than $2 billion being invested in public transportation infrastructure over the next two years which should help alleviate congestion. The Battery Atlanta, located at the nexus of I-285, I-75, and Cobb Parkway, is also surrounded by 14 access points, compared to Turner Field’s two access points.

The Braves have also partnered with Waze and Uber, secured 14,000 parking spaces, and linked into public transit services CobbLinc and the Cumberland District Circulator, which will provide transportation to SunTrust Park.

Meant to be a lifestyle destination, The Battery Atlanta features numerous shopping opportunities, including immersive experiences from Mizuno and Harley Davidson.

On the restaurant front, concepts include the First & Third Hot Dog and Sausage Shack from Chef Hugh Acheson and Live! at The Battery Atlanta, developed by The Cordish Companies, which incorporates a two-level Sports & Social Club and the PBR Bar & Grill (branded for the Professional Bull Riders Association). For all you New Kids on the Block fanatics, there’s Wahlburgers, the high-end burger concept from Mark and Donnie Wahlberg.

Rounding out the entertainment district is the Coca-Cola Roxy Theatre, a 53,000-square-foot music venue owned by Live Nation. The Roxy is an iconic name in Atlanta, the original location being a movie theater on historic Peachtree Street. The venue relocated to Buckhead in the 1970s, but closed in 2010.

The new 4,000-capacity Coca-Cola Roxy Theatre is expected to host 40 shows a year, including its opening performance by the Glass Animals on April 8th. Other notable names on the concert calendar are Lil Wayne and Bush.